Balloon or Bougienage Dilation for Esophageal Stenosis in Children?

Copyright:© 2015 Gurfinkel A, et al. This is an open-access article distributed under the terms of the Creative Commons Attribution License, which permits unrestricted use, distribution, and reproduction in any medium, provided the original author and source are credited.

Purpose: Esophageal stenosis (ES) in children is defined as a fixed intrinsic narrowing of the esophagus caused by numerous etiologies. Treatment mainly consists of intraluminal dilation using balloon or Savary-Gilliard bougies. Methods: We retrospectively reviewed all medical records of children with ES treated by balloon or bougies. Our aim of this study was to compare both method of esophageal dilation in terms of safety, short- and long-term outcome. Results: Forty-two children were included in this study, 22 males (52%), mean age at diagnosis was 3.9 ± 5.7 years. This group underwent 190 dilation procedures in our institution between 1994-2013. The median treatment period was 5.5 months and the median follow-up after the last dilation was 2.25 years. The average number of dilations was 4.5 (range 1-22). Twenty-four patients had anastomotic stricture after surgical treatment of esophageal atresia (57.1%), 8 had stenosis following caustic ingestion (19%), 3 had functional stenosis due to esophageal motility disorders (achalasia) (7.1%) and the others (16.7%) had congenital ES, eosinophilic esophagitis, foreign body ingestion, or were post-fundoplication. Dilations were defined as failures in 11 children (26.2%). The success rate was 87% for the bougienage group (13 children) and 67% for the balloon group (18 children) (p=NS). The success rate was 75% (24 children) after caustic ingestion and surgical correction of esophageal atresia. There were 6 (3.1%) procedure-related complications that included 2 cases of aspiration pneumonia and 4 esophageal perforations. Conclusions: Esophageal dilation in children is a safe procedure with a high rate of long-term success. Longterm success of dilation among children with ES depends primarily on the etiology of stenosis and less on the method of dilation.

Esophageal stenosis (ES) in children is a rare clinical condition defined as a fixed intrinsic narrowing of the esophagus during childhood. Congenital esophageal atresia (EA) is one of the main reasons for ES, with an incidence of approximately 1 in 2,500 live births [1]. Associated anomalies occur in 50% of cases, the majority involving one or more of the VACTERL association (vertebral, anorectal, cardiac, tracheoesophageal, renal and limb defects) [1]. Other etiologies for ES include caustic and foreign body ingestion, peptic stricture, motility disorders, congenital ES and eosinophilic esophagitis. All of the symptomatic strictures can be dilated endoscopically, with good tolerability and ease of implementation [2,3]. In severe cases, unresponsive to esophageal dilations, surgery may be indicated. Two main techniques are presently used in children: the original mechanical dilation by the Savary-Gilliard bougies and the new pneumatic balloon dilation. The choice of dilation technique depends mainly on the physician’s personal preference. According to some authors, balloon dilation appears to be more effective and safe in cases of caustic and post-atresia strictures, although mechanical dilation in these indications also seems to be equally efficient [4-9]. Rodriguez-Baez and Andersen [10] showed that balloon dilators are most useful when it is desirable to minimize esophageal trauma and when the strictures are short. Savary-Gilliard dilators are useful for strictures resistant to balloon dilation and for long strictures that require carefully controlled and graded dilation [10]. Different treatments have been proposed for subtypes of ES, but their effectiveness remains controversial. Because of the reoccurrence of anastomotic strictures, some children need several dilations, and repetition of the procedure is associated with significant morbidity and complications [11,12]. The aim of this study is to retrospectively evaluate and compare both method of esophageal dilation in terms of safety, short- and long-term outcome.

Stenosis was defined as a clinically and radiologically or endoscopically proven stricture at the level of anastomosis following surgically corrected esophageal atresia or elsewhere in the esophagus in other patients. The exclusion criteria included children in whom stenosis or stricture was not confirmed. All patients’ clinical, radiologic, and surgical data for 1994-2013 were retrieved. Their esophageal strictures were confirmed by radiology and/or endoscopy. They were divided into 4 groups of anastomotic stricture according to etiology: Group A=post-surgical treatment of EA, Group B=post caustic agent ingestion, Group C=due to motility disorders (achalasia) and Group D=other reasons (congenital ES, eosinophilic esophagitis, foreign body ingestion, s/p fundoplication).

All dilations were performed under general anesthesia given by an anesthesiologist. We used balloons (Boston Scientific, Natick, MA, USA) inflated for 2 minutes per dilation, with a maximum increase of 3 mm per session. There was an interval of 1-4 weeks between procedures.

Bougie over guidewire dilators are used at the time of gastroscopy or fluoroscopy. Bougies are introduced over the guidewire in sequentially increasing sizes. The most commonly used bougie over guidewire dilators are the Savary or Savary–Gilliard dilators or with bougies over a gastrostomy (Rehbein bougies). All the patients were evaluated in our outpatient clinic for their ability to drink and eat, weight gain, and growth. Contrast radiography or gastroscopy was performed when warranted by clinical symptoms. The indications for bougienage or balloon dilatation was not constant, hence comparison between the two was done only in term of success and complications rate.

Characteristics of the patients

Forty-two patients (22 males and 20 females) were diagnosed as having ES and underwent 190 dilations between 1994-2013. The mean age at diagnosis was 3.9 ± 5.7 years (median 1.3 years, range 1 day-20 years). There were 5 preterm babies, and they were all in Group A. There were 24 patients with anastomotic stricture after surgical treatment of EA in Group A (57.1%), 8 patients with post-caustic agent ingestion in Group B (19%), 3 patients with motility disorders in Group C (7.1%) and 7 patients with other etiologies (4 congenital ES, 1 eosinophilic esophagitis, 1 foreign body ingestion, 1 s/p fundoplication) in Group D (16.7%). Five Group A patients had VACTERL association malformations and 4 had various non– VACTERL gastrointestinal malformations (Table 1). 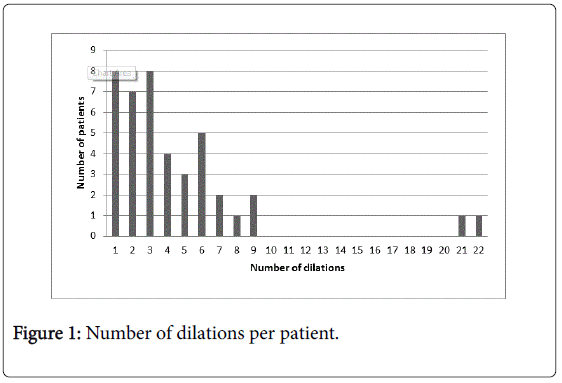 Figure 1: Number of dilations per patient.

The effectiveness of endoscopic treatment was evaluated based on clinical and endoscopic signs: specifically, improvement of clinical status (dysphagia and vomiting), acceptable nutritional status, achieving normal weight and height percentile for age and/or improvement in the degree of stenosis based on upper endoscopy or barium swallowing.

Failure was defined as inability to meet this points and / or failure to improve from the previous observation. The dilations were defined as successful in 31 (73.8%) patients and failure in 11 (26.2%) patients. Analysis of the therapeutic success rate according to etiology of the stenosis demonstrated that 18/24 of the children in Group A were define as successful compared to 6/8 in Group B, 0/3 in Group C and 7/7 in Group D (p=0.0163) (Figure 2). 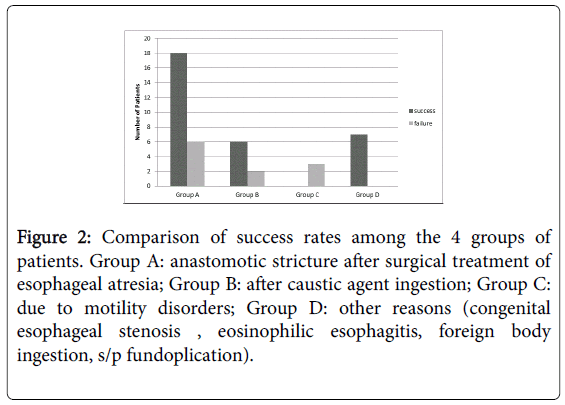 Comparison of the therapeutic success rate according to the method of dilation revealed that all 31 successful cases were composed of children who underwent 18 balloon dilations (15 fluoroscopic and 3 endoscopic) and 13 bougienage dilations (Figure 3). Although there was an overall success rate of 87% for the bougienage group and 67% for the balloon group but it was not statistically significant (p=NS). 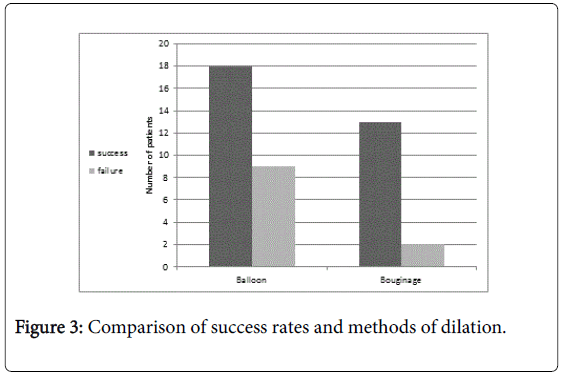 Figure 3: Comparison of success rates and methods of dilation.

There were 6 procedure-related complications in 5 children who underwent esophageal dilation. Four of them had undergone radiologic balloon dilation included 2 with aspiration pneumonia and 2 with esophageal perforations that had been treated conservatively (with total parenteral nutrition and intravenous antibiotic therapy). There was one perforation in an endoscopic balloon dilation procedure and one during bougienage, and each of these children had also been treated conservatively. None of these 5 patients needed surgical intervention. None of the 42 study patients required intubation or ventilation, and there were no procedure-related mortalities.

Dilation is the main non-surgical treatment for esophageal stenosis in adults and children as well. Dilation of ES using balloon catheters in infants as a replacement for the "old" bougienage dilation technique was first reported in 1984 [13]. The procedure is usually controlled fluoroscopically [14,15]. Shah and Berman [16] used solely endoscopy, while Tam et al. [17] combined endoscopy and fluoroscopy, which they claim to be a safer dilation procedure. In most cases, multiple esophageal dilations are usually required to achieve sufficient improvement. In our current series, 42 pediatric patients underwent 190 dilation procedures, with an average of 3 per patient. In contrast, Orenstein and Whitington [18] reported 211 procedures in 13 patients (average 16 per patient), while Dalzell et al. [19] reported 150 procedures in 36 patients (average 4 per patient). This range of the required number of dilations could be attributed to the various etiologies of ES, which may respond differently to the same method of dilation.

The pediatric literature contains few reports on the advantages of each of the available methods of dilation [6,9], and there are no studies which compare them. Moreover, long-term efficacy of esophageal dilation is difficult to define, and only a few studies report long-term outcomes. Lisý et al. [20] reported that 80% of their patients with ES were asymptomatic at 1 year after the last balloon dilation. This is consistent with our findings of the 73.8% overall long-term success rate (based on clinical and endoscopic signs) of esophageal dilation. Additionally, the success rate was 87% for the bougienage group and 67% for the balloon group.

We found that the long-term success rate of dilation of ES depends primarily upon the etiology of the stenosis. Certain disorders, such as congenital ES, eosinophilic esophagitis, foreign body ingestion, and s/p fundoplication (Group D), had the best long-term results, compared to the 3 other etiology groups, especially a motility disorder (p<0.05). Our EA patients achieved a success rate of 75% after dilations, a value that is consistent with that reported in the literature. Lang et al. [21] found that 77% of children with EA went for more than 1 year without requiring further dilation. Those authors concluded that balloon dilation was a more effective treatment than bougienage for alleviating symptoms as well as for reducing the length of stay in the hospital [21]. Our 75% success rate among children with ES after caustic agent ingestion was the same at that reported by Lakhdar-Idrissi et al. [22]. Our group of children with esophageal motility disorder failed dilations, and we were unable to find any published data in the pediatric literature with which to compare that outcome. Esophageal dilation is, however, a good alternative therapy for adults with esophageal motility disorder, with a reported response rate for a single dilation session of 66% at 1 year and 59, 53, 50 and 25% at 2, 3, 5 and 10 years, respectively [23]. Finally, the overall perforation rate in our series was 3.1%, which is comparable to the Figures reported in the literature: 5% to 8% for balloon dilations [24] and 0.18% [25] or 5.6% [9] for bougienage.

This study has certain limitations and our findings should be interpreted with some caution. The low success rate in the balloon group in comparison to the bougienage group may partly reflect the retrospective nature of this study. There had been no randomization of patients to each method of dilation, and the choice of dilation technique depended on our physicians’ personal preferences. Moreover, ours is a tertiary referral center and some of the patients in our cohort arrived from other primary medical center after having already been dilated but whose symptoms of stricture persisted. As such, our ES cases may be more complicated than those generally treated in primary centers.

In conclusion, esophageal dilation in children with ES is a safe procedure with a high rate of long-term success that depends primarily on the etiology of the stenosis and less on the method of dilation.