Journal of Bioresearch Communications
Make the best use of Scientific Research and information from our 700+ peer reviewed, Open Access Journals that operates with the help of 50,000+ Editorial Board Members and esteemed reviewers and 1000+ Scientific associations in Medical, Clinical, Pharmaceutical, Engineering, Technology and Management Fields.
Meet Inspiring Speakers and Experts at our 3000+ Global Conferenceseries Events with over 600+ Conferences, 1200+ Symposiums and 1200+ Workshops on Medical, Pharma, Engineering, Science, Technology and Business

Copyright: © 2017 Bai J. This is an open-access article distributed under the terms of the Creative Commons Attribution License, which permits unrestricted use, distribution, and reproduction in any medium, provided the original author and source are credited.

Visit for more related articles at Journal of Bioresearch Communications

Sulfur dioxide (SO2) is a colourless gas with a sharp, irritating odor. It is produced by burning fossil fuels and by the smelting of mineral ores that contain sulfur. Exposure to SO2 produces toxic symptoms such as thickening of the mucous layer of the respiratory tract, pneumonia, nasopharyngitis, fatigue [1]. Epidemiological investigations suggest that SO2 exposure increases morbidity and mortality, particularly among subjects with respiratory diseases and cardiopulmonary disease [2,3]. However, the underlying molecular mechanism remains unclear. Our previous study indicated that chronic SO2 exposure led to increased free-fatty acid levels in the serum and enhanced lipogenic gene sterol regulatory element-binding proteins gene expression (SREBP1 and SREBP2) in the heart [4], suggesting a risk of lipotoxicity in the heart.

SREBP1 and SREBP2 are major transcription factors that activate the expression of genes involved in biosynthesis of fatty acid and cholesterol. Betulin, a small molecule that specifically inhibits the activation of SREBP, has been shown to decrease the lipid contents in serum and tissues in vivo [5,6]. Thiazolidinedione (TZD) is a widely used diabetic mediation and acts by activating peroxisome proliferator-activated receptor gamma (PPARγ), a key regulator of fatty acids oxidation and glucose-lipid metabolism. In animal models, PPARγ agonist treatment improves lipotoxic cardiomyopathy [7]. In the current study, we aimed to elucidate whether inhibiting fatty acid synthesis or promoting fatty acid oxidation would ameliorate SO2 inhalation-induced lipid accumulation program in heart.

Consistent with our previous finding, real-time RT-qPCR analysis revealed that the mRNA expression of both SREBP1 and SREBP2 were stimulated by chronic SO2 inhalation in rat hearts. Administration of streptozotocin (STZ), a compound that has a preferential toxicity toward pancreatic β cells, successfully induced diabetic rats as indicated by hyperglycemia (data not shown). STZ treatment greatly increased SREBP1 levels but not SREBP2. In addition, SO2 exposure in STZ-induced diabetic rats did not further increased the expression of SREBP1 or SREBP2 compared with single treatment, indicating there is no synergistic effect of SO2 on STZ. Treating rats with TZD had no effect on SO2-induced SREBP1 or SREBP2 expression, but ameliorated the STZ-induced SREBP1 expression in heart. Betulin gavage treatment markedly diminished both SO2-induced and STZ-induced elevation of SREBP1 expression and suppressed SO2-induced SREBP2 expression. Taken together, these data suggested that betulin could rescue SO2-induced lipid and cholesterol overproduction and partially mitigated the effect of STZ on lipid synthesis, however TZD treatment cannot improve SO2 inhalation-induced lipid metabolism disturbance (Figure 1). 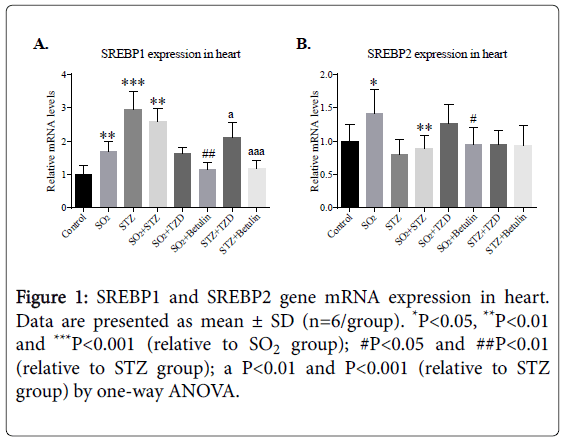