Beyond Proteinuria: Apoptosis and Vitamin D3 State in Children with Diabetic Nephropathy

Diabetic nephropathy (DN) is the leading cause of death in patients with diabetes mellitus type I (T1D). Formation of diabetic nephropathy depends on the quality of blood glucose control. The aim of the study was to investigate the level of metabolic-hypoxic disorders, condition of apoptosis controlling system and Vitamin D3 levels in children with diabetic nephropathy. The study involved 36 children with type I diabetes and diabetic nephropathy (aged 6 to 17 years). The affinity of haemoglobin to oxygen determined by spectrophotometric method. The levels of the marker of cellular hypoxia HIF-1alfa, levels of the apoptotic factor caspase-3 studied by Western Blotting, Vitamin D3 levels were analyzed using ELISA assay. In the group of children with newly diagnosed T1D an increased rate of dissociation of oxygen and haemoglobin compared to the control group was detected. Children with DN the levels of this index were significantly lower than the control group. We show stage-dependent manner in increase of the cellular hypoxia and apoptotic effector caspase-3 levels. Both markers detected at significantly higher rate in DN patients as compared to T1D. Vitamin-D3 deficiency is documented in patients with DN. Thus, the development of DN in children is associated with violation of Hb/oxygen dissociation, a sign of the high degree of the Hb glycosylation resulting to the formation of cellular hypoxia and activation of apoptosis, as one of the basic mechanisms of cell damage kidneys in DN. All mentioned above disorders accompanied by Vitamin D3 deficiency.

Diabetes mellitus type I (T1D) nowadays is a major public health problem in the world. According to recent data, about 140 million people worldwide suffer from diabetes. The main complication of the T1D is a diabethis nephropathy (DN). The main biochemical disorder in diabetes and DN is hyperglycemia, causing a toxic effect of activating a chain of different intracellular enzymatic reactions, apoptosis, inflammation, oxidative stress. [1-3]. Adequate control of blood glucose in patients with diabetes is a critical aspect of therapy. Glucose present in the blood in excessive concentrations can enzymatically bind to proteins such as hemoglobin and causes glycosylation. The level of glycosylated hemoglobin formation depends on the concentration of glucose in the environment. People with high blood glucose levels will have higher levels of glycated hemoglobin. Non-enzymatic glycation that occurs as a result of spontaneous interaction between glucose and amino groups of proteins, leading to the formation of products of advanced glycation (AGA) [3,4].

Tubulointerstitial fibrosis and tubular atrophy appear to be better predictors of renal disease progression than glomerular pathology than glomerular disorders. Nephrons from proteinuric diabetic patients show that 71% of glomeruli display glomerulotubular junction abnormalities and 8-17% of glomeruli are atubular glomeruli [5].

The mechanisms underlying tubular atrophy in diabetic patients are incompletely understood. In vitro and in vivo studies have shown that high glucose (HG) concentrations are associated with increased reactive oxygen species (ROS) production, inflammation which inhibits proximal tubular function and induces apoptosis. Apoptosis has been detected in renal proximal tubular cells (RPTCs) of diabetic mice and rats [5,6]. Moreover, in vitro data show the role of Vitamin D3 in rescuing kidney cells from apoptosis induced by glucose and albumin. These processes in pediatric patients with T1D and DN are not fully studied.

Aim of the study. The aim of the study was to investigate the level of metabolic-hypoxic disorders, condition of apoptosis controlling system and Vitamin D3 levels in children with diabetic nephropathy.

A survey of 36 patients’ children with T1Ds (aged 6 to 17 years) who were hospitalized in the Endocrinology unit on Children’s Clinical Hospital (Kyiv in 2014-2015) was done. Complex examination including conventional methods (inspection, monitoring blood pressure, blood tests, study of urinary sediment, renal ultrasound, etc.) was done to all patients. Other than conventional methods i.e. spectral analysis of the forms of hemoglobin, plasma levels of HIF-1alfa, caspase-3, Vitamin D3 was done. The control group included 13 healthy children. Study performed based on ethical standards National Ukrainian committee on human experimentation (National O.O. Bogomolets medical University) and on the Helsinki Declaration.

Depending on the general clinical data, all patients were divided into groups (Table 1). In all children the levels of hemoglobin affinity to oxygen were studied based on Sore peak analysis. Children from control show this index at the level 3.05 ± 0.23 a.u. In the group of children with newly diagnosed diabetes hemoglobin/ogygen dissociation was enhanced in comparison to control group -3.61 ± 0.25 a.u. (p<0.05). In the group of children diabetic nephropathy the level of index was documented at level 1.76 ± 0.27 a.u. (p<0.01, compared control group (Figure 1). Figure 2: A) Western Blot showing expression of HIF-1α in childen with T1D and DN. B) Densitometric quantification of HIF-1α. The density of the band from control group was set to 100%. Histograms show the mean ± SEM. *р<0.05. 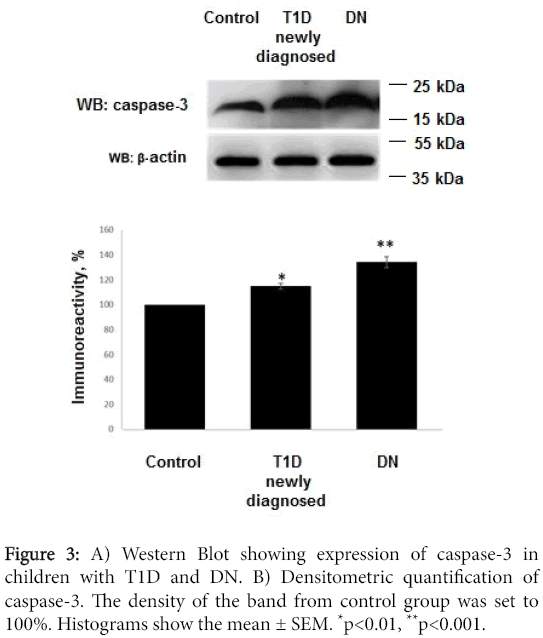 Figure 3: A) Western Blot showing expression of caspase-3 in children with T1D and DN. B) Densitometric quantification of caspase-3. The density of the band from control group was set to 100%. Histograms show the mean ± SEM. *р<0.01, **р<0.001.

Normal level, insufficiency and deficiency of the Vitamin D3 were defined as ≥30 ng/mL, 21-29 ng/mL and ≤20 ng/mL, respectively. Endogenous levels of the Vitamin D3 are season-dependent. All patients have been recruited to the study during the September- Fabruary. 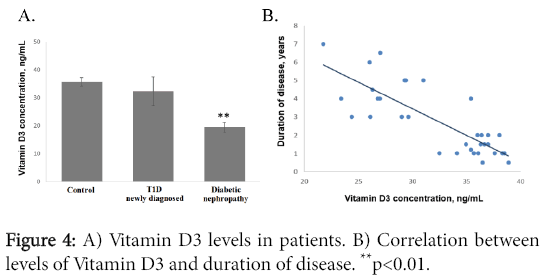 Figure 4: A) Vitamin D3 levels in patients. B) Correlation between levels of Vitamin D3 and duration of disease. **р<0.01.

It has been widely accepted, and histological studies have confirmed, that the deterioration of renal function in chronic kidney disease (CKD) better correlates with tubular and interstitial changes than with glomerular changes. Tubular dysfunction has been reported in the absence of microalbuminuria in patients with diabetes mellitus. Early tubular injury has been reported in patients with diabetes mellitus whose glomerular function is intact [7].

Chronic hypoxia of the tubulointerstitium has been recognized as a mechanism of progression that is common to many renal diseases. The hypoxic milieu in early stage diabetic nephropathy is aggravated by manifestations of chronic hyperglycemia-abnormalities of red blood cells, oxidative stress, sympathetic denervation of the kidney due to autonomic neuropathy, and diabetes-mellitus-induced tubular apoptosis; as such, tubulointerstitial hypoxia in diabetes mellitus might be an important early event [7-9]. 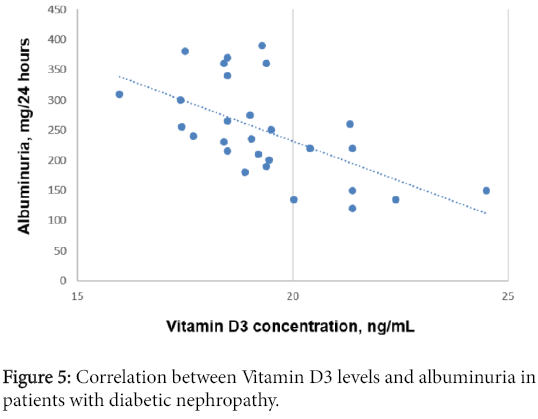 Figure 5: Correlation between Vitamin D3 levels and albuminuria in patients with diabetic nephropathy.

Here we show that patients with newly diagnised T1D have incresed levels of cellular hypoxia and its dramatic increase in patients with DN. At the same time chronic hypoxia is a potent inducer of apoptotic factors activation and cell death through apoptosis especially in tubular segment of nephrosis. We show the link between these two conditions-cellular hypoxia and apoptosis whereas the high levels of apoptotic effector caspase-3 activation both in T1D patients and DN patients was documented.

Hemoglobin belongs to the family of proteins containing prosthetic group and protoporphyrin IX (heme). In addition to transport oxygen hamohlobin performs a number of important functions: binding of nitric oxide and sulphides, interaction with reactive oxygen and nitrogen, and other sensory functions. As a result of hyperglycemia in diabetes there is an increase oxyhemoglobin formation and its transformed forms. Damage to the porphyrin ring followed by degradation of heme appears. Heme degradation is carried out in two stages and includes heme iron oxidation and nitration of tyrosine residues. Nitration of hemoglobin leads to changes in protein conformation leading to changes of its affinity to oxygen [10].

Hemoglobin-the first protein for which it was shown the nonenzymatic glycosylation resulted in glycosylated hemoglobin (HbA1c) formation. Blood levels of HbA1c is a marker for disorders of glucose metabolism and/orls adequate control of blood glucose levels in diabetic patients [10,11]. In this study we found a significant increase of HbA1 in patients with diabetic nephropathy as compared to newly diagnosed T1D.

Hemoglobin glycosylation sites mostly are amino N-terminal amino acid valine in β-chains and ε-amino groups of lysine residues of some α- and β-chains. The presence of glucose molecule at the N-β-globin chains leads to the decrease of hemoglobin affinity to oxygen [12,13]. This phenomenon was shown by us in the group of patients with established diabetic nephropathy. In contrast, group of children with T1D have enhanced hemoglobin affinity to oxygen was enhanced. This might be an explanation that the organism provides a compensatory reaction after the general metabolic disorders induced by hyperglycaemia.

The kidney plays a central role in vitamin D3 metabolism and regulation of its circulating levels. Beyond its role in calcium and phosphate homeostasis, vitamin D is an important modulator of cellular proliferation, inflammation, differentiation, and immunity [14]. Vitamin D3 attenuates kidney injury by suppressing fibrosis, inflammation, and apoptosis, by inhibiting multiple pathways known to play a role in kidney injury, including the renin-angiotensinaldosterone system (RAAS), the nuclear factor-κB (NF-κB) [15], the transforming growth factor-β (TGF-β)/Smad [16].

It has also been reported that an increased Bax/Bcl-2 ratio and the cleaved form of caspase-3, which are apoptotic markers, are reversed by paricalcitol treatment in gentamicin-induced kidney injury [19]. Here we show that patients with diabetic nephropathy have increased activity of caspase-3. In addition, D3 prevents puromycin aminonucleoside-induced apoptosis of glomerular podocytes by activating the phosphatidylinositol 3-kinase/Akt-signalling pathway.

Copyright: © 2016 Burlaka I, et al. This is an open-access article distributed under the terms of the Creative Commons Attribution License, which permits unrestricted use, distribution, and reproduction in any medium, provided the original author and source are credited.