Biofeedback for Cognitive and Motor Deficits: A Case Report

Copyright: © 2011 George DA, et al. This is an open-access article distributed under the terms of the Creative Commons Attribution License, which permits unrestricted use, distribution, and reproduction in any medium, provided the original author and source are credited.

When treating individuals with limited abilities, clinicians often have difficulty promoting the desired motor response. This struggle is especially true with individuals who have severe cognitive disability (CD). McLean et al [9] found the communication abilities of 84 individuals with severe CD to be limited with facial expressions, gestures, and sounds. However, they also stated that the majority has some potential to perform either symbolic or non-symbolic forms of engagement. The challenge is finding the learning strategy that promotes engagement. Using biofeedback as a strategy may promote the desired motor responses that could be otherwise hard to obtain for those individuals with limited abilities.

Biofeedback is an intervention, whereby the individual takes some sort of action, and receives direct feedback based on the action. It may be used for multiple purposes, such as changing the heart rate, temperature, and muscle tension [1,11,15,16]. There may be an activation of weak or paretic muscles; a relaxation of hypertonic muscles; or a promotion of a balance between the agonist and antagonist muscles. Over time, individuals may become more aware of their abilities to interact with the device and the desired motor response is obtained. Individuals may then use the improved motor control for functional activities. For example, a review of the literature produced by James, listed improvements of head control, sitting, hand-eye fine motor activity, and gait with the use of biofeedback [7].

There have been case reports and testimonials published, concerning the use of different types of biofeedback [5,6,13]. As James pointed out, majority of the studied cases had immediate improvements and encouraged further study [7]. For example, Ellis, Van Leeuwen, and Brown examined participants of various diagnoses and ages (i.e., 2 to 100 years) [5]. They found behavioral changes indicative of an influence by biofeedback (i.e., Soundbeam system), which were described as: involuntary to voluntary; accidental to intentional; indifference to interest; confined to expressive; gross to fine; exploratory to preconceived; and solitary to individual responses.

Swingler found that children with severe CD responded to auditory biofeedback by listening, verbalizing, and composing music with the device [13,14]. In addition, he reported improved aesthetic resonance via facial expressions; attention span; capacity for concentration; and physical movements of the limbs, trunk, and head, never seen before. However, the article did not provide details of the outcomes.

In another article, Ellis supplied information on two cases, specifically relating to biofeedback from the Incidental Music Research Project [6]. Both case studies involved an eight-year old boy one with cerebral palsy (CP) and the second with Leigh’s disease. They found the physical movement becoming more controlled and purposeful with a slow and steady progression for both children. The first child’s teacher reported that after the intervention began, his posture in the classroom improved from slumped to upright, and he was more alert. The second teacher also gave a positive report, stating that there was improved upright posture and motivation. They concluded that the intervention improved the cause and effect skill, communication abilities, and trunk control. Like the other reported articles, the specificities of Ellis’ data and specific outcomes were not mentioned; the improvements to each individual’s deficits were not objectively recorded.

A more rigorous approach to the research investigation may help justify use of biofeedback for individuals with limited abilities. Therefore, the purpose of this study was to objectively describe the motor responses obtained with biofeedback. The specific research questions asked were:

1. Does biofeedback have a positive effect on trunk control?

2. Does biofeedback have a positive effect on UE reaching?

He received therapeutic interventions (i.e., 2X/week) consisted of strengthening and lengthening exercises; positioning activities; sitting balance; and coordination skills. He also received a daily home program through a trained caregiver. Engagement often proved difficult for the participant due to the combination of cognitive impairment, limited communication, and delayed motor responses. When he was fully engaged in an activity, his abilities with maintaining and controlling an unsupported sitting position were improved. Thus, the team searched for a means to fully engage the participant, thereby improving his capabilities to hold a seated position.

The participant’s dynamic trunk control was poor and purposeful movements (e.g., reaching) were limited. Most other objective measurements (i.e., sensory testing, Manual Muscle Testing) were difficult to conduct with this participant due to the severe CD. Prior to the investigation, a functional assessment, the Gross Motor Function Classification System (GMFCS) was conducted [10]. His GMFC level was found to be at a V, which meant that he was at a dependent level and had to be transported in a manual wheelchair. Standing, sitting, repositioning in bed, transfers, and all activities of daily living required the use of adaptive equipment, maximum assistance from caregivers, or a combination of both.

The team chose to focus on the participant’s trunk control and ability to reach. Thus the measured outcomes were time holding a seated position and number of active reaches. Over a four week period (June to July of 2008), these outcomes were measured by the same examiner. Measurements were taken with the participant straddling a bolster. The bolster was elevated with cinderblocks in order to position his hips and knees in flexion at 700 and 800 respectively. Bilateral solid ankle foot orthoses and appropriate shoes were donned prior to each trial in order to provide a stable base.

The examiner recorded the time (i.e., minutes and seconds) the participant was able to maintain a seated position with a stopwatch. Timing began when the examiner stopped providing external support to the participant, and timing ceased when assistance was required to maintain the upright position. The number of active reaching attempts was also recorded during each trial. The same procedure was used with both interventions (i.e., biofeedback and mechanical toy).

Biofeedback (i.e., Soundbeam system) was chosen to encourage UE reaching and maintenance of the seated position (Figures 1 and 2). The Soundbeam system is a device, which emits an invisible beam at an ultrasonic frequency of 40 KHZ and responds to the disruption of the beam caused by the participant’s movement [12-14]. The length, width, and direction of the beam can be manipulated as desired, allowing the beam to be positioned on any body part in almost any position. When the beam is broken through physical movement, the motion is transformed into digital sound. The computer interface programs then offer a good variety of sounds [12]. The manipulation of the sound directly corresponds to the individual’s active motion into the beam [12,13]. The interaction between the motion and the audible changes is real time [8,12]. This feature provides immediate feedback to the individual, which offers an optimal environment for engaging and teaching the cause and effects principle. 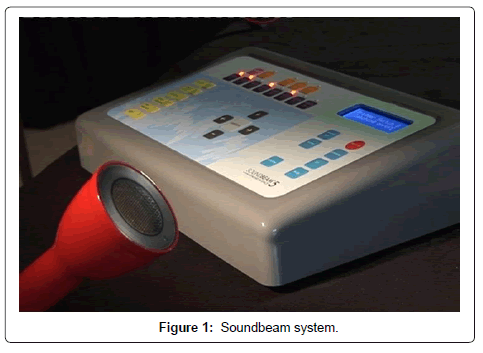 The participant was also asked to reach out and either “play a song” or “touch the toy” with supervision by the same therapist. Over the course of four weeks (once per week), he was asked to sit for ten minutes with each intervention (i.e., biofeedback or toy). A ten minute rest period occurred between each scenario to ensure recovery from fatigue. Scenario one and two were alternated as the first activity each week.

Data from all sessions except for one week indicated that the time holding a seated position increased with biofeedback. When examining all trials across the whole month, the mean number of seconds of sitting with biofeedback was 71.1 seconds and with the mechanical toy, 38.9 seconds. Even though the overall mean was found to be higher with the biofeedback, it was found to be not significant (t (27) = 1.52, p =.135). See Table 1 for the weekly ranges, means, and standard deviations for time holding the seated position.

The results indicated that the biofeedback was more influential on the participant’s trunk control and ability to reach than the treatment with the mechanical toy; the number of reaches was significantly greater with biofeedback. This finding was consistent with the literature concerning the use of an auditory biofeedback [5-7,12,13]. It could be that the immediate response of the biofeedback to the participant’s actions is what made a difference with individuals who have severe CD. The immediate response may have kept the participant more engaged. The idea of improved alertness and engagement was indicated by the two teacher reports, as presented by Ellis [6]. The results of this study provided additional evidence for engagement.

Besides the immediate response, the aesthetic nature of the chosen biofeedback may have made it more pleasing for the participant to continue being engaged over a longer period of time (i.e., four weeks). Time may be required for individuals with CD to become aware of their abilities to interact with devices. Individuals may then use their improved motor abilities for functional activities. This study provided support for the improvement of two functional activities that James had listed, which were trunk control and ability to reach [7].

One limitation to the study may have been environmental distractions. The participant shared a home with two clients, two caregivers, and one nurse. Sounds were impossible to avoid such as a ringing phone or others talking. Perhaps a more controlled environment would have made a greater difference with the results. However it should be noted that the distractions occurred throughout all sessions and for both types of treatments.

Another limitation could have been rater’s error; the examiner may not have accurately recorded the participant’s responses. However, this was minimized by using the same examiner for the entire month and any error would be consistent throughout the recording phase of this study.

This case report has served as a good starting point for exploring the potential of biofeedback for a participant with severely limited abilities. Additional well designed single-subject studies are recommended to determine if biofeedback can make significant changes in motor responses over longer periods of time. Along with the assessment of motor responses, objective measurement of functional skills pre and post interventions would be of benefit. Future studies should utilize a greater number of participants covering the spectrum of CD, as well as a variety of genders and ages.