Background: Multidrug-resistant Acinetobacter baumannii is an increasing problem worldwide. The objective of this study was to describe the outbreak of Acinetobacter baumannii producing carbapenemases at the Mayotte Hospital Center.
Methods: This is a descriptive study using routine data collected prospectively in patients' medical records. From the different services (Emergency, Intensive Care, Surgery, pediatrics, Medicine) between 2016 and 2019. The A. baumannii strains were collected from biological samples and rectal swabs. The isolates were identified using the API®20NE and VITEK®2. Each strain was confirmed by molecular typing and molecular basis by PCR.
Results: 80 patients were included in this analysis. The median age of the patients was 48 years (interquartile range (IQR): 33.3 – 57 years). They were mostly male (63.7%). Half of the patients were Comorian (73.8%). More than half of the cases were collected in ICU (41.2%). The isolation period lay between 1 and 120 days with median duration of 11.5 days (4.3 – 23.5 days. A blaNDM-1 and blaOXA-23 genotypes coexistence was observed in 70% of the patients. Eleven deaths were observed.
Conclusions: This study showed that the epidemic as changed with the detection of blaNDM-1 and blaOXA-23 genotypes coexistence. In addition, efforts to control the spread of A. baumannii producing carbapenemase and surveillance measures are urgently needed to Mayotte.

Acinetobacter baumannii is an important opportunistic and nosocomial pathogen causing pneumonia, bacteremia, and other respiratory and urinary tract infections [1,2]. It is responsible for outbreaks worldwide, mainly in hospital environment including intensive care units (ICUs) [3]. Eradication of nosocomial infections caused by A. baumannii is particularly troublesome due to the ability of this bacterium to rapidly acquire antimicrobial resistance [4] and persist in the environment [5]. A. baumannii can survive on solid and dry surfaces for up to five months, due not only to the simplicity of its nutritional requirements and its high degree of resistance to disinfectants and antiseptics, but also of its capacity to resist to extreme pH and temperatures and biofilm formation on abiotic substrates as well as on biotic surfaces [6,7]. These characteristics of A. baumannii are likely to be a major factor contributing to its nosocomial spread [7]. It is thought that A. baumannii infections are mostly acquired after exposure to contaminated hospital’s equipment or by direct contact with healthcare personnel that have been previously exposed to this bacterium [8]. It is important to mention other characteristics of this bacterium which give it a high natural resistance as well as an exceptional capacity to up-regulate the innate and acquired mechanisms of antimicrobial resistance [7]. Increased resistance to carbapenems in A. baumannii has raised special concerns during the last decade, especially since it is associated mostly with the production of acquired carbapenemases belonging to either class B metallo-β-lactamases or carbapenem-hydrolyzing OXA-type class D β-lactamases [2]. Three types of enzymes capable of hydrolyzing carbapenems have been reported in A. baumannii, belonging to class A (blaGES-14 and blaKPC), class B (blaIMP, blaVIM, blaSIM-1 and blaNDM-1) and class D carbapenemases (blaOXA-23-like, blaOXA-24-like, blaOXA-51-like, blaOXA-58-like, blaOXA-104, blaOXA-143, blaOXA-164 and blaOXA-182) [9]. Outbreaks of carbapenem-resistant A. baumannii strains have been documented in diverse geographical areas including Europe, South America and Asia [9,10].

The aim of this study was to describe the outbreak of A. baumannii producing carbapenemases at the Mayotte hospital center.

This is a descriptive study using routine data collected prospectively in patients' medical records from three different services (Emergency, Intensive Care, Surgery, pediatrics, Medicine) between 2016 and 2019.A. baumannii strains were collected from biological (blood, pus, urinary, bronchoalveolar fluid, cutaneous) specimens and rectal swab. The distinction between infection and colonization was based on clinical criteria established by the CTINILS of May 2007 [11].

Isolates that were identified as A. baumannii were confirmed to be resistant to most antibiotics, including meropenem, imipenems, ciprofloxacin, levofloxacin, amikacin, gentamicin and most of the β-lactams. However, they were sensitive to colistin.

Between 2016 and 2019, 80 cases carbapenem-resistant A. baumannii isolates had been collected at Mayotte Hospital Center. The median age of the patients was 48 years (IQR: 33.3 – 57 years). They were mostly male (63.7%). Almost three-quarter (73.8%) of the patients were Comorian origin, while Mayotte accounted for 20% of cases. Thirty-six patients (45%) were infected and forty-four (55%) were colonized. Half of the patients were admitted to the hospital for burn, pneumonia or a skin infection. The samples were obtained from various infection sites: in the rectal swab (23.8%), pus (22.5%), in Bloodstream infections (15%), urinary (15%), catheters 3 (3.8%).The isolation period lay between 1 and 120 days with a median duration of 11.5 days (4.3–23.5). The PCR analysis showed a blaNDM-1 and blaOXA-23 genotypes coexistence in 70% of the patients. The isolates 80 A. baumannii were resistant to all β-lactams, including carbapenems (with imipenem and meropenem MICs>64 μg/mL). The isolates remained susceptible to colistin (MIC<0.25 μg/mL). We had observed 11 deaths (13.8%) in our study (Table 1).

Table 1: Characteristics of the study participants.

The survival curve for infected patients showed that most deaths were observed during the first 20 days of hospitalization and that the median duration of survival was estimated at 41 days (95% CI: 8-74) (Figure 1A). The survival curve for the incidence of death was significantly higher in patients hospitalized in emergency or intensive care units (logrank test p=0.036) (Figure 1B) and in patients with NDM-1 and OXA-23 genotypes coexistence (log rank test p = 0.038) (Figure 1C). 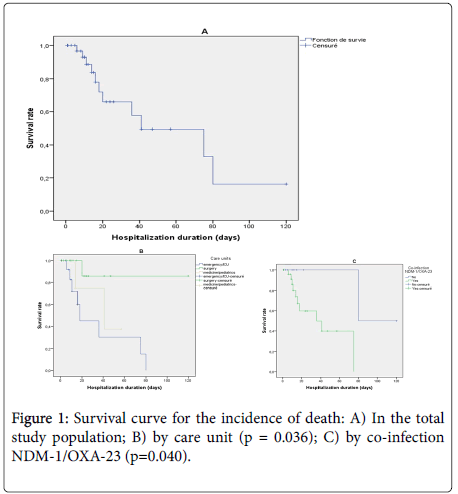 This article presents the first described epidemic of A. baumannii isolates producing carbapenemases in a 411-place hospital for a population of 256,500 inhabitants in 2017 [12] in a French overseas department "Mayotte", located in the Indian Ocean region. A. baumannii can cause a wide variety of infections. Most the cases involve the respiratory tract, but also bacteremia and skin infection [13]. A survey in U.S. hospitals showed that most the isolates (57.6%) were from the respiratory tract, followed by bloodstream (23.9%) and skin or wound (9.1%) in 2010 [14]. Acinetobacter species were ranked fifth as the causative organism of ventilator-associated pneumonia (6.6%) and thirteenth as the cause of central line-associated bloodstream infection (2.1%) [15]. We reported for the first time an epidemic of carbapenemase-producing A. baumannii and highlighted a high prevalence (70%) of a coexistence of two carbapenemase genotypes (blaNDM-1 and blaOXA-23) in a French overseas department (Mayotte). This coexistence has been described sporadically during outbreaks in Kenya [16], Libyan [17] and India [18] with one case each. The class D carbapenemases (oxacillinases) are by far the most prevalent carbapenemases in A. baumannii [19]. The first case of OXA-type enzyme was reported from a clinical A. baumannii isolate detected in Scotland in 1985. It was initially named ARI-1 (Acinetobacter resistant to imipenem) [20] and renamed OXA-23 after sequencing [21]. Nosocomial outbreaks or sporadic cases caused by carbapenem-resistant A. baumannii producing these OXA-enzymes have been reported worldwide [9,22]. A. baumannii epidemic strains were assigned to international clonal lineages I or II [23]. During a long period, the OXA-58 carbapenemase gene has been predominated among carbapenem-resistant A. baumannii isolates in various Mediterranean countries [24]. Since 2009, a replacement of OXA-58 gene with OXA-23 gene has been reported and it became the most prevalent carbapenemase-encoding gene circulating in the Mediterranean region: Algeria [25], France [26] and Spain [27]. The replacement of OXA-58 by OXA-23 might be explained by the selective advantage associated with the higher carbapenemase activity of OXA-23 [28,29] and/or acquisition of carbapenem resistance through horizontal gene transfer [29]. To date, four groups of MBLs have been identified in A. baumannii: IMP-like, VIM-like, SIM-like, and recently the NDMs [22]. Concerning NDM producers, A. baumannii bacteria harboring these enzymes were increasingly observed around the world [31]. The isolation of an NDM-1-producing A. baumannii in a Czech patient repatriated in 2011 from Egypt was described [32]. They were detected in North Africa: Libya (isolated from a patient transferred from Libya to Denmark) [30]; in Europa: France, the emergence of imported cases of NDM-1-producing A. baumannii was linked with Algeria [31]. At the beginning of the epidemic in our hospital, infection control measures requiring a group approach usually involving strict contact precautions, weekly meetings with unit staff, contact precautions and hand hygiene, a daily chlorhexidine bath, preventive contact, educational activities, improved terminal cleaning procedures, the study of environmental sources was undertaken urgently in the various departments (especially intensive care unit, surgery and operating room) until '' obtaining a culture of negative surveillance and finally limiting the use of carbapenems in probabilistic terms. Studies have shown that this resistant strain tends to cause outbreaks when it enters the hospital environment and can survive on inanimate surfaces for at least 1 month [33,34]. Environmental sites can be contaminated with MDR A. baumannii in almost half of hospital rooms receiving patients with a history of bacterial infection or colonization. [35] Consequently, transmission occurs both through direct contact with the patient and through contact with the environment of the patient's room, caregivers' gloves and/or gowns were contaminated after 39% of all meetings with patients colonized by MDR A. baumannii, which suggests that these precautionary measures against contact are essential to prevent the transmission of the organism to another patient by health professionals [36]. The risk factors for acquiring MDR and carbapenem-resistant isolates include recent exposure to antimicrobial agents (carbapenems), the presence of central venous catheters or urinary catheters, severity of illness, duration of hospital stay, location in an intensive care unit (ICU), larger hospital size, and recent surgery [37].

The median age of the patients was 48 years, showing the old age of the study participants. Indeed, this result highlighted that constitute a risk factor of A. baumannii infection, due probably to the presence of comorbidities, including chronic or metabolic diseases. In this study, we observed a male predominance of patients infected with A. baumannii. In contrast, a cross sectional study performed in Rajaei hospital, Tehran, Iran [38] showed a female predominance of infected patients.

A. baumannii has become one of the most problematic nosocomial pathogens during the past two decades, aided by his extraordinary ability to accumulate antimicrobial resistance and survive in the modern health care environment. The results of our study show that the epidemiology has changed with the detection of a coexistence of blaNDM-1/OXA-23 gene. In addition, efforts to control the spread of Acinetobacter baumannii producing carbapenemase and surveillance measures are urgently needed to Mayotte.

The authors thank the microbiology technologist team of Hospital, Mayotte for their technical assistance and the laboratory of medical biology of the center of reference of resistance to antibiotics (CHRU de Besançon).

The research protocol was approved by the ethical committee of the de Mayotte Hospital Center. All participants were informed of the study aim and procedure and advised that participation was voluntary and confidential. Informed verbal consent was obtained from those who agreed to participate in the study.

Copyright: © 2020 Diallo A, et al. This is an open-access article distributed under the terms of the Creative Commons Attribution License, which permits unrestricted use, distribution, and reproduction in any medium, provided the original author and source are credited.