Boceprevir in Mexico: Experience in a Series of Cases

Copyright: © 2015 Marin JAM, et al. This is an open-access article distributed under the terms of the Creative Commons Attribution License; which permits unrestricted use; distribution; and reproduction in any medium; provided the original author and source are credited.

There are many new drugs for HCV treatment. First generation protease inhibitors are about to be discontinued. However in developing countries the likelihood of access to these new drugs is vague. As in other poor countries, in Mexico we only have peg interferon and ribavirin for HCV treatment and the costs of the new therapies are hard to fill. This is a report of the outcome in 30 patients who received triple therapy adding Boceprevir to peg interferon and Ribavirin as part of an extended-access program. As described elsewhere Latinos have lower response rates. This is the largest series of cases in Mexico City, and we would like to share this experience with other developing countries.

There are many new drugs for HCV treatment. First generation protease inhibitors are about to be discontinued. However in developing countries the likelihood of access to these new drugs is vague. As in other poor countries, in Mexico we only have peg interferon and ribavirin for HCV treatment and the costs of the new therapies are hard to fill. This is a report of the outcome in 30 patients who received triple therapy adding Boceprevir to peg interferon and Ribavirin as part of an extended-access program.

As described elsewhere Latinos have lower response rates. This is the largest series of cases in Mexico City, and we would like to share this experience with other developing countries.

When first-generation protease inhibitors (PI) (boceprevir and telaprevir) appeared they provided new hope for hepatitis C virus (HCV) patients [1,2]. As we know, 130–150 million people globally have chronic HCV infection and a significant number of those who are chronically infected will develop liver cirrhosis or cancer [3]. Of the six HCV genotypes, genotype 1 is the most prevalent in Mexico and in the United States, accounting for 70% of all chronic infections [4]. Addition of boceprevir to peginterferon and ribavirin (PR) markedly increased the rate of sustained virological response (SVR) in people with HCV genotype 1 who had no previous experience of PR (67% and 68% compared with 40.9% for PR) and in those with previous experience of treatment (59% and 66% compared with 21% for PR) [1,2,5]. However, there are still populations that are difficult to treat: response rates with PR therapy are lowest in genotype 1 re-treated nonresponders with cirrhosis (15.6%, confidence interval [CI] 12.4%–19.4%) [6]. Previous studies demonstrated a lower SVR rate of 34% with PR in the Latino population compared with 49% in Caucasians [7]. In the SPRINT-2 study, African-Americans who received therapy with PR and boceprevir had a poorer virological response than Caucasians (47% and 53% vs. 67% and 68%, respectively) [1]. Patients with liver cirrhosis are underrepresented in clinical trials. A French early access program (Compassionate Use of Protease Inhibitors in Viral Cirrhosis, CUPIC) investigating the new triple therapy only in those with advanced liver fibrosis revealed a totally different safety profile, with alarming rates of up to 49% severe adverse effects (SAE) and a mortality rate of up to 2% [8]. The addition of a PI increased the rates of adverse events (AE). Anemia and dysgeusia are the most common AE in these patients; the other common AE were nausea, diarrhea, and neutropenia [9].

The main purpose of this report is to analyze the “real-life” efficacy and safety profile of triple therapy in an expanded-access group of previous treatment-experienced patients with HCV genotype 1 in a “Latino” population in Mexico City.

We included patients with HCV infection who had previously failed treatment with PR who attended a tertiary infectious diseases hospital in Mexico City and who received triple therapy with peginterferon, ribavirin, and boceprevir as part of an extended-access program. Previous responses were classified as null response (lack of decrease in HCV RNA level of 2 log10 IU/mL by week 12), partial response (decrease in HCV RNA level of at least 2 log10 IU/mL by week 12 but detectable after 24 weeks of treatment), or relapse (HCV RNA not detected at the end of treatment but SVR not achieved). Liver biopsy was offered to patients as part of the response-guided therapy. Because different pathologists evaluated the histological samples, we decided to classify the results of the biopsies as presence or absence of cirrhosis. All patients received a lead-in of 4 weeks treatment with peginterferon alfa 2b or alfa 2a and ribavirin adjusted for body weight. Boceprevir was added at a dose of 800 mg (four 200 mg tablets) three times a day, adjusted to a response-guided therapy that consisted of boceprevir plus PR for 32 weeks. Patients with undetectable RNA HCV at weeks 8 and 12 completed 36 weeks of therapy. Patients with detectable HCV RNA at week 8 but undetectable at week 12 received PR until week 48. Patients with cirrhosis confirmed by liver biopsy received 48 weeks of treatment.

The plasma HCV RNA level was measured with the TaqMan 2.0 assay (Roche Diagnostics) before the lead-in period, at weeks 4, 8, 12, 24, 36, and 48 of therapy and 12 weeks after the last PR dose. A good response to interferon was defined as a decline ≥ 1 log10 at the end of the lead-in period compared with the basal level. The main objective of this study was to evaluate the total number of patients with undetectable HCV RNA at 12 weeks post treatment (SVR12). Secondary objectives were to identify the rates of anemia (Hgb < 10 g/dL), severe anemia (Hgb < 8 g/dL), thrombocytopenia (< 100,000 platelets/mm3), and leukopenia (< 3,500 cells/mm3). We evaluated the changes in total cholesterol and triglycerides because we consider that dyslipidemia is one of the main AE in the use of IPs.

Baseline characteristics were summarized using medians and interquartile ranges (IQR) for continuous variables and proportions for categorical variables. Multivariable logistic stepwise regression analysis was used to explore the independent effects of the treatment and the baseline factors (body mass index [BMI], presence of cirrhosis, previous response to PR, HCV RNA level at baseline and at 8 weeks of treatment, and good response to interferon) on the likelihood of achieving an SVR. All tests were two sided, and p < 0.05 was considered significant. The tests were performed using SPSS software version 20. 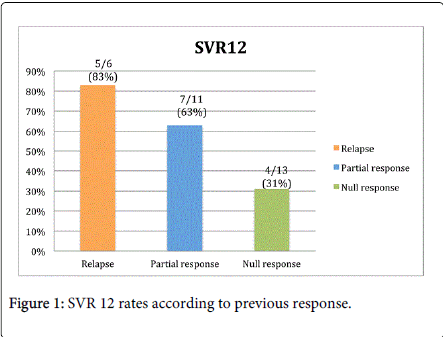 We found an SVR rate of 50% to triple therapy in treatment-experienced patients, which is inferior to that reported by the RESPOND-2 study [2]. In 2014, the CUPIC study (n = 212) reported SVR12 rates with boceprevir of 53.9% for relapsers, 38.3% for partial responders, and zero for null responders. Severe AE were reported in 49.9% of cases, including liver decompensation, severe infections, and death [10].

Many authors have analyzed the difficulty of determining the eligibility of patients who can receive triple therapy with first-generation IPs, and have found that almost 50% of patients can have serious AE or can fail 12 weeks of treatment. They have found that a platelet count of 110,000/mm3 was associated with hospitalization as well as treatment failure [11]. In our study, six patients started treatment with less than 100,000 platelets/mm3 but only one of these had an SVR12. One had severe thrombocytopenia and received eltrombopag without effect, so we had to cease triple therapy. The development of anemia is a marker of higher ribavirin exposure: this was observed in the IDEAL and in the SPRINT-2 trials [12]. The highest rate of anemia in our study was 23% at weeks 4 and 24, which was lower than that reported in the CUPIC cohort (49%) and in the RESPOND-2 study (43% and 46%). The patients who suspended treatment because of refractory anemia received blood transfusions and erythropoietin but had no good response. The suspension rate because of anemia in the RESPOND-2 study was 3%, which is lower than that in our study (10%). The overall rate of premature treatment suspension in the CUPIC cohort was 23.9%, and in our study 13% (4/30) of patients suspended treatment because of refractory AE. Factors associated with successful therapy are race, age, baseline HCV RNA, and the absence of significant fibrosis. In the bivariate analysis in this study, female sex, age less than 50 years and a good response to interferon were important factors associated with SVR12, in the multivariate analysis age less than 50 years and good response to interferon remained associated with SVR12. In SPRINT-2, patients with fibrosis grade F0–F2 had a good response rate: SVR was 38% in the control group and 67% in the two boceprevir-treated groups (p < 0.001). In patients with advanced fibrosis or cirrhosis, the SVR was 38% in group 1 (control), 41% in group 2, and 52% in group 3: this difference was not significant [13]. We classified our histological samples as cirrhosis or no cirrhosis and did not find that this was an important factor in achieving an SVR12. However, we must consider that our study population was small (n = 30), so we cannot exclude the possibility that cirrhotic patients will have lower response rates and more adverse events.

The high cost of HCV treatment with boceprevir has limited the access of patients to this treatment; in Mexico, we have a social security institution that provides PR as a part of treatment but not the use of boceprevir. Some studies have analyzed the cost-effectiveness of boceprevir in patients previously treated with PR alone and found that boceprevir-based regimens were projected to reduce the lifetime incidence of liver-related complications by 43% to 53% in comparison with treatment with PR [14].

Our study has some deficiencies. The first is the small number of patients included, but as has been discussed above, the price of the drug limits access in Latin America. Despite this, we have tried to adhere to international recommendations in the surveillance of our patients. Anemia and thrombocytopenia were treated with dose reductions as first-line therapy because the use of erythropoietin and eltrombopag elevated the treatment costs significantly. Despite these limitations, this is the first study of its kind in Mexico City and demonstrates similar rates of SVR with boceprevir and PR and the same rate of adverse events and treatment suspensions in a cohort of patients with previous PR experience.

We would like to thank all the physicians that were involved with the follow up of the patients and to all the patient’s families because of their thrust and patience.