Body Mass Index and the Risk of Gallbladder Cancer: An Updated Meta-analysis of Epidemiologic Studies

Copyright: © 2015 Cai C, et al. This is an open-access article distributed under the terms of the Creative Commons Attribution License, which permits unrestricted use, distribution, and reproduction in any medium, provided the original author and source are credited.

Objectives: To provide a quantitative assessment of the association between excess bodyweight, expressed as increased body-mass index (BMI), and the risk of gallbladder cancer (GBC), we conducted an updated meta-analysis of epidemiologic studies.

Methods: We searched the MEDLINE and EMBASE databases form1966 to February 2013, and the reference lists of retrieved articles. A random-effects model was used to combine study-specific results. A total of 12 cohort studies (involving 5,101 cases) and 8 case-control studies (1,013 cases and 43,591 controls) were included in the meta-analysis.

Gallbladder cancer (GBC) is a highly fatal malignancy that differs from other cancers of the biliary tract, as being about two to five times more common in women than in men [1]. Prognosis of GBC remains very poor due to its late clinical presentation, lack of effective non-operative therapy, and rapid turnover [2].

It has been established that history of gallstones is the leading cause of gallbladder cancer worldwide [3]. Additionally, genetic susceptibility, lifestyle factors, smoking, alcohol use and diabetes mellitus (DM) also increase the risk of GBC development [4-7]. Excess bodyweight, people who are overweight (BMI 25-30 kg/m2) or obese (BMI >30 kg/m2), is increasingly recognized as an important risk factor for various cancer types, including GBC [8]. A recent meta-analysis showed increased GBC risks of 15% for overweight people and of 66% for obese ones compared to those in normal weight [9]. However, this meta-analysis did not allow for some potential confounders, in particular smoking and alcohol abuse. Since then, lots of studies on the association between BMI and GBC risk have been published.

The aim of this meta-analysis was to update and expand the previous meta-analysis including all observational studies on this issue published through February 2015. Furthermore, we evaluated whether the risk of GBC varied between sex and geographic region.

We searched the MEDLINE and EMBASE databases for relevant studies that were published from 1966 to February 2015, using the search terms ‘body mass index’, ‘BMI’, ‘overweight’, ‘obesity’ or ‘excess body weight’, combined with ‘gallbladder cancer’, ‘gallbladder neoplasm’ or ‘biliary tract cancer’. We also reviewed the reference lists of retrieved articles to search for additional studies. No language restrictions were imposed.

A published article was included according to the following criteria: (1) cohort or case-control study in which GBC incidence or mortality was an outcome; (2) the exposure of interest was overweight or obesity defined by BMI; (3) estimates of relative risk (rate ratio, odds ratio, or standardized incidence ratio) with corresponding 95% confidence intervals (or information to calculate them) of GBC associated with BMI or obesity. When there were multiple published reports from the same study population, only the one with the largest sample size was included in the meta-analysis. We excluded studies that did not provide risk estimates, only provided an RR with corresponding 95% CI per unit increase in BMI.

Three authors (C.C.F, B.Z, and J.Z.) independently evaluated all of the studies retrieved according to the pre-specified selection criteria. Discrepancies between the three reviewers were solved by discussion. The following information from each included study was extracted: the ﬁrst author’s name, country of origin, publication year, sample size, study population, study design, sex and age of participants, duration of follow-up (cohort studies), BMI categories, method of assessment of weight and height (measured versus self-reported), and point estimates [relative risk (RR), odds ratio (OR), or standardized incidence ratio (SIR)] and corresponding 95% CI. When several risk estimates were presented, we used the ones adjusted for the largest number of potential confounders. We used the Newcastle-Ottawa scale to assess the quality of included studies [10].

The present systematic review and meta-analysis was conducted in accordance with the methodology recommended by the Cochrane Collaboration. Three authors (C.C.F, B.Z, and J.Z.) performed data analysis. To examine associations of overweight and obesity with the risk of GBC, we combined the log-RRs from each study for the category representing overweight (BMI 25-30 kg/m2) or obesity (BMI >30 kg/m2 or a discharge diagnosis of obesity) versus the reference category (BMI 18.5-24.9 kg/m2). If studies reported results separately for men and women, we combined the sex-speciﬁc estimates to generate an estimate for both genders combined. When non-standard BMI categories were used, we selected the category that was most similar to those defined by the WHO. The DerSimonian and Laird random-effects model was employed to combine the study-specific relative risks [11]. Subgroup analyses were carried out based on the study design (cohort and case-control studies), sex (men and women), and geographic region (non-Asia and Asia), body size assessment (measured and self-reported), Follow-up time (>10 years and <10 years), smoking status (smokers and non-smokers), Alcohol intake (Yes and No). We also conducted a sensitivity analysis in which one study was removed and the rest were analyzed to assess whether the results were affected statistically significantly.

Heterogeneity among studies was assessed by using the Q and I2 statistics [12]. For the Q statistic, statistical significance was set at P<0.1. Publication bias was evaluated using funnel plots and the Egger test [13]. P<0.1 was considered to indicate statistically significant publication bias. In the presence of publication bias, we used the “trim and fill” method to correct such bias [14]. Meta-analyses were carried out using STATA12.0 (StataCorp, College Station, TX, USA).

A total of 883 articles were identified through the literature search. Of these, 34 publications were potentially relevant for inclusion in the meta-analysis. Three studies were excluded because of gallbladder cancer was not distinguish from extrahepatic bile duct system cancer, 8 studies were not associated with GBC risk, and 3 studies were insufficient to estimate trend. Finally, a total of 12 cohort studies [15-26] (involving 5,101 cases) and 8 case-control studies [27-34] (1,013 cases and 43,591 controls) with data on BMI and/or obesity in relation to incidence of GBC were included in the meta-analysis (Figure 1). The main characteristics of the studies included in the meta-analysis are summarized in Supplementary Tables 1 and 2.

Table 1: Stratified meta-analyses of overweight and obesity and risk of gallbladder cancer. 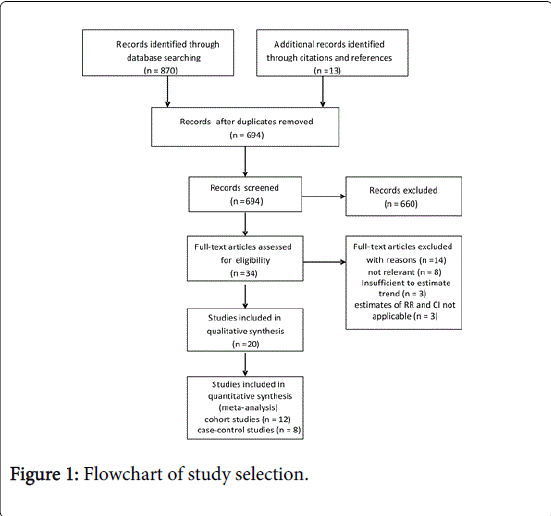 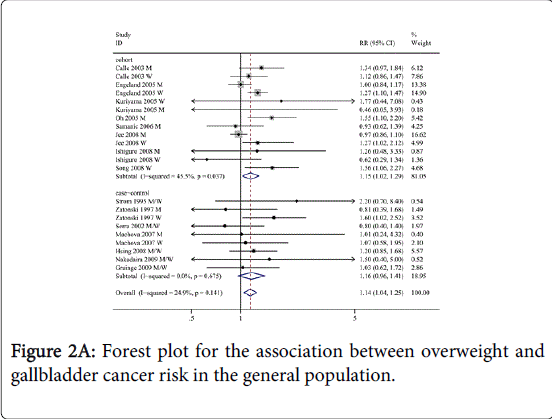 Figure 2A: Forest plot for the association between overweight and gallbladder cancer risk in the general population. 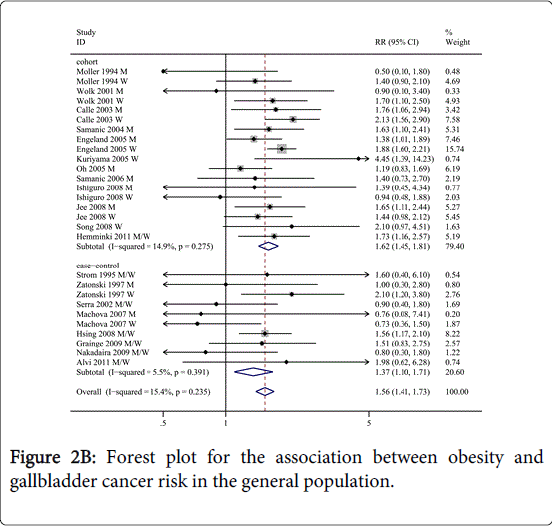 Figure 2B: Forest plot for the association between obesity and gallbladder cancer risk in the general population.

When stratified by geographic region, the association between obesity and the risk of GBC was similar for both Asia and non-Asia. For non-Asians, overweight was strongly associated with GBC incidence (RR=1.14, 95% CI=1.05-1.25, I2=1.7%); no link between overweight and the GBC risk was observed for Asians.

For self-report studies, both overweight and obesity had a higher risk of GBC development, while the summary RR did not differ appreciably between studies that based on direct measurements of weight and height.

In the sensitivity analyses, we removed one study at a time and calculating the summary RR. We found that there were no changes in the direction of effect when any one study was excluded, supporting the robustness of our results. For example, when the study of Engeland et al. was excluded (which seemed to have a strong influence on the meta-analysis estimate of effect), the summary RR remained similarly with the overall pooled RRs (RR=1.15, 95% CI=1.03-1.28, I2=17.8%).

No indication of publication bias was observed in the literature on BMI and GBC risk in overweight group based on the Egger’s test (P=0.483) results (Figures 3A and 3B). For BMI and GBC risk in the obesity group, the funnel plot showed some asymmetry (Figure 3B), indicating some evidence of bias. However, when the “trim and fill” approach was performed, data were unchanged, suggesting that the effect of publication bias could be negligible. 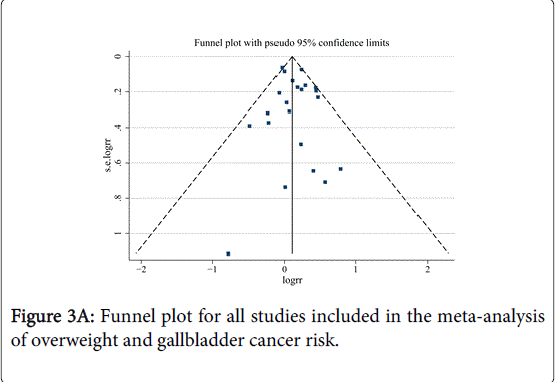 Figure 3A: Funnel plot for all studies included in the meta-analysis of overweight and gallbladder cancer risk. 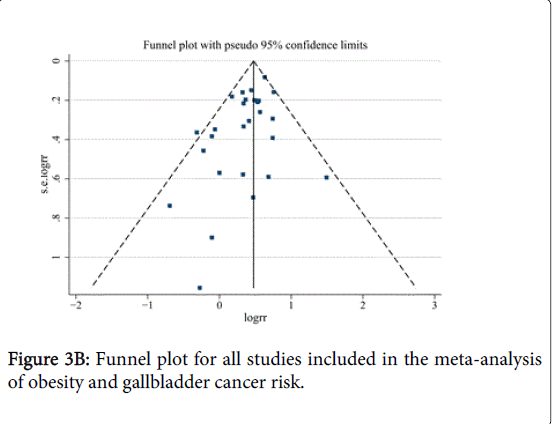 Figure 3B: Funnel plot for all studies included in the meta-analysis of obesity and gallbladder cancer risk.

In this meta-analysis, we found that overweight and obesity were associated with 14% and 56% increased risk of GBC, respectively. Our results consist with previous studies that the association between obesity and GBC risk was higher in women than in men. Women with overweight had a higher risk of GBC development, no link between overweight and the GBC risk was observed for men. In addition, subgroup analysis showed that overweight was not associated with an increased risk of GBC in Asia, non-smokers and non-drinkers.

To our knowledge, the strengths of this study include as follows: (1) this study was based on 20 epidemiologic studies, which might minimize the possibility of selection bias. (2) The large number of studies of different geographic region expands prior observational studies by permitting additional evaluation of subgroups, which may lend us to more precisely evaluate. (3) The association between BMI and GBC risk of each study were derived from regression after adjustment at least for age, and most adjusted for potential confounders for GBC, such as smoking and alcohol use.

As with any meta-analysis of observational studies, our study also has limitations. First, inadequate control for confounders may bias the results, leading to exaggeration or underestimation of risk estimates. Thus, when interpreting the link between excess body weight and GBC risk, possible unmeasured or residual confounding should be considered. Gallstone is closely in related to GBC risk [41]. Meanwhile, obesity tends to be accompanied with DM, which is also associated with increased GBC risk [6,42]. However, most studies did not adjust for these risk factors. This could have led to an overestimation of the true association between obesity and risk of GBC. Second, several studies in this meta-analysis relied on self-reported weight and height measures, which may attenuate the relative risk estimates. However, the summary RR estimates for the studies that had measured weight and height were similar to those on self-reported. Finally, as in any meta-analysis, there was some suggestion of publication bias, because a few studies with null results tend not to be published. However, the results obtained from this study did not provide evidence for such bias.

There was no heterogeneity observed across studies about overweight and GBC risk, and obesity and GBC risk. We analyzed this review in both fixed effects and random effects, and found that they had no significant differences. Thus, the more conservative one, random effects, was chosen finally. Next, when we tried to carry out subgroup analysis to investigate sources of heterogeneity, statistical heterogeneity was lower in analysis of case-control studies, population based studies, Non-Asia studies and BMI ascertainment by self-reported, indicating that these might account for heterogeneity observed in studies about overweight and GBC risk.

In summary, findings of this meta-analysis provide evidence that obesity may increase GBC risk. Further studies that meet epidemiologic criteria on this subject are needed to strengthen the link between BMI and GBC risk, especially those adjusting potential confounding factors such as gallstones and DM.

This work was financially supported by the National Natural Science Foundation of China (No. 81401996), and the Medical Research Foundation of Guangdong province (No. A2014228).