Department of Reconstructive and Plastic Surgery, AV Vishnevsky Institute of Surgery of the Russian Academy of Medical Sciences, Moscow, Russia

Copyright: © 2013 Grishkevich VM. This is an open-access article distributed under the terms of the Creative Commons Attribution License, which permits unrestricted use, distribution, and reproduction in any medium, provided the original author and source are credited.

Postburn severe edge ankle dorsiflexion contractures are the result of deep burn of the lateral joint surface. The contracture affects the foot motions, impairs the lower extremity function and slows down its development in pediatric patients; scars and tissue defects cause severe deformities. Therefore, early reconstruction is needed. Review of literature shows that ankle scar contractures are the least researched among big joints contractures when it comes to surgical treatment, and little attention is given to this problem. The most common curative technique is a contracture release with contracted scar incision and skin grafting (1). Rarely distally based sural or free flaps are used (2). Severe ankle contractures are treated using Ilizarov fixator. (3). The rate of contracture recurrence is high (see Discussion). It is no clear why local tissues (scars and healthy skin) cannot be used for ankle contracture treatment.
There is no anatomic classification of the ankle scar contractures. Our experience (personally operated 55 patients with ankle scar contractures) allowed us to divide all dorsiflexion scar contractures into three types and propose appropriate surgical local-flap techniques for each type (4). It was also noted that mild and moderate edge and medial dorsiflexion contractures can be successfully eliminated with trapeze-flap plasty using local adiposecutaneous and adipose-scar trapezoid flaps. New approach allowed escape skin grafts and regional pedicled flaps. Previous publications did not cover the severe ankle dorsiflexion contracture. In this paper we add to research and literature by analyzing the anatomy and treatment of one child, 5-years of age, with severe both ankles edge contractures. The paper aims to demonstrate that the trapeze-flap plasty in combination with skin grafting are able to solve a very complex problem and achieve excellent functional and good cosmetic outcomes. Edge ankle contractures (Figures 1 and 2), making up 31% of the total number (our statistics), were caused by scars located on the joint’s lateral (one or both) surface. Anterior joint surface remained undamaged. Edge contracture was characterized by the crescent-shaped fold formed along the edge anterior ankle surface. The lateral fold’s sheet (according to medial ankle line) was scars; the medial fold’s sheet is healthy skin that spreads on undamaged anterior ankle joint surface. The crest of the fold is the edge of scars. These three anatomic features determined the name for this type, edge. Contracture is caused only by the lateral scar sheet in which there is a surface deficit in length, which is real cause the contracture. In both fold’s sheets there is a surface surplus in width which allows contracture treatment with local flaps. The scar sheet surface deficiency in length (reason for contracture) must be determined since reconstruction is aimed to compensate the deficiency with an adequate flap. The form and size of scar surface deficiency is estimated using the following steps (Figures 3 and 4, left): the sheets are divided with an incision along the fold’s crest; with Y-shaped perpendicular incision the scar sheet is dissected from the fold’s crest to the malleolus where the incision is split under 45 degrees (Figures 1and 2). After ankle dorsiextention, a trapezoid wound, as a rule, appeared, reflecting the form and size of scar surface deficiency which was maximal at the fold’s crest and spread, subsiding, to the mlleolus (Figures 3 and 4, left, medially from dark strip). It was obvious that a similar (trapezoid) flap was needed for deficiency compensation and contracture elimination. The planning consisted of several lines’ drawing: the line along the fold’s crest, perpendicular Y-shaped line on the scar’s sheet; before the malleolus, the line is split (45 degrees), and two lines depicting the flap’s borders on ankle anterior surface (Figures 1 and 2).

With the first incision along the fold’s crest, the sheets were separated. The following Y-shaped incision dissected the scar sheet to the malleolus (scars and subcutaneous fat layer). After full ankle extension, a large trapezoid wound was formed (Figures 3 and 4, left, medially of dark strip). According to the wound’s form, the big trapezoid flap was mobilized including full subcutaneous fat layer (Figures 3 and 4, left). The end of the flap was 4 cm wide; the flap’s length was about 5-6 cm. The flap’s end included part of the fold’s crest, the flap’s base located ahead the contralateral malleolus. The flap was transposed on the wound with moderate tension and connected with the wound’s edge near malleolus (Figures 3 and 4, right). As a result, the ankle lateral surface was covered with healthy adipose-cutaneous layer (Figures 3 and 4, right). Due to severe scar surface deficiency, the wound edges divergence was more significant than in cases of mild and moderate contractures; therefore, the scar sheet was impossible to use for donor wounds’ coverage located aside the flap which was skin grafted. The scheme of the operation is shown in Figure 5. Simultaneously ulcerous scars over patella and upper legs were excised and the wound was covered with neighboring tissue displacement and skin grafts (Figure 6). 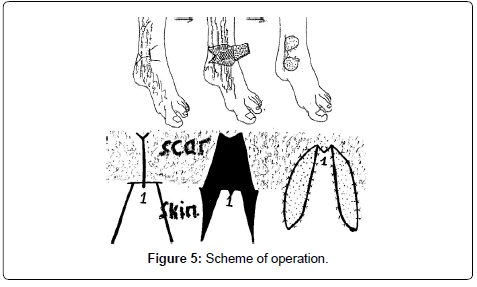 Contracture of both ankles was fully eliminated; both flaps were alive and covered ankle’s anterior and lateral surfaces. Local flaps that covered upper legs and knee anterior surfaces were also alive. Skin transplants on the feet and legs well grew with wound tissue (Figure 6). No serious postoperative complication occurred. Followup observation: one and three years after surgery (Figures7 and 8); function and contours of the ankle and knee (Figure 9); joints restored, contracture released completely. Due to contracture elimination, the legs and feet developed well and increased in size. Flaps continued to grow parallel with legs and ankle, preventing contracture recurrence. Skin transplants converted in the well-functioning skin, continued to grow without signs of shrinkage. The function of lower extremities was restored, and their appearance also significantly improved due to surgical treatment of concomitant contractures and deformities. 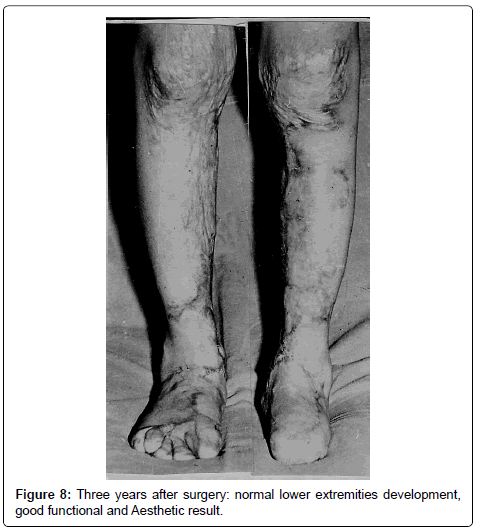 Ankle scar contractures are often combined with foot and leg deformities; therefore, more attention is given to foot reconstruction as a more severe complication. Investigations dedicated solely to postburn ankle scar contractures are an exception. Thus, many aspects of postburn ankle reconstruction remained not researched. An aspect that needs further investigation has to do with the anatomic features of the contractures and the new approach to the efficacy of local tissue use. Specific anatomic features of edge ankle contracture are: contracted scars on the lateral ankle’s surface form the fold, located along the edge of flexion (anterior) joint’s surface. The fold consists of two sheets. The lateral (according to medial joint’s line) sheet is scars and it causes the contracture due to scar surface deficiency in the length. The medial sheet of the fold and adjacent joint’s flexion (anterior) surface is healthy skin, allowing contracture elimination with the local and adjacent tissues. The crest of the fold is the edge of scars.

Traditional local flap techniques, based on triangular flaps (Z-, Y-V plasty and their variations), are not applied for obvious reasons: the subcutaneous fat layer is thin, blood circulation of scars in ankle area is reduced; therefore, flaps are often disposed to necrosis. As a result, a commonly accepted technique is contracture release with cross-cut contracted scars incision and wound covering with thick split skin graft [1-3], both in adult and children [4]. According to Prakash et al.[5] recommendation, the ankle contracture should be released in such a way that a well-settled segment of scars is left over the joint, and the incision defects created on either side should be grafted. In pediatric patients whose contractures were released using cross-cutting of the band and skin grafting, recurrence was at 15% [6].

Many authors reported that the tissue defects of the ankle, foot, and Achilles’ tendon area were resurfaced with the sural distally based or island flap. In burned patients, this flap was used for postburn tissue defect treatment of lower leg, foot and ankle but rarely since the leg is often injured, or a large surface should be resurfaced [7-10]. Distally based sural flap was also used for ankle reconstruction after release of postburn flexion contractures [11]. The average complication rate was up to 59% [12], the major drawback of this flaps’ usage was the donor site deformities [2].

Severe contractures of ankle and foot are treated with Ilizarov apparatus [13]. Carmichael et al. [13] indicated that the recurrence rate for all 29 ankles was 69%. Contemporary methods for burn treatment prevent the severe contracture formation [14,15].

The in-depth analysis of existing literature showed that there is no efficient and safe technique that would allow a surgeon to complete a contracture release using local tissues without posing danger or cause flap necrosis. Therefore, the flaps should be bigger in comparison to flaps used for reconstruction of big joints.

In light of own practical experience, it is fair to state that dorsiflexion ankle scar contractures are not anatomically homogeneous, but have three types, distinctly differing one from other: edge, medial and total. The edge and medial contractures (76% of the total number, our statistics) are characterized by the fold’s presence; the fold’s sheets have a surface surplus, allowing reconstruction with local tissue.

The essence of edge contracture treatment lies in scar surface deficiency compensation using sheets’ surplus and healthy neighboring tissue. The contracted scars surface deficiency has a trapezoid form and spreads from the fold’s crest to malleolus. Consequently, the medial sheet and ankle anterior surface should be converted into trapezoid flap. To complete these tasks, the trapeze-flap plasty was found most suitable: it was based on the use of large adipose-cutaneous flap, having the wide end and steady circulation. The technique is effective, safe, and effective, allows the fully use a healthy sheet and neighboring tissue of ankle anterior surface. Trapezoid flaps had steady blood circulation, did not undergo rotation and necrosis. In case of severe contracture, the large adipose-cutaneous trapezoid flap forms a central ankle flexion area; the skin grafts asides the flap did undergo to the mild retraction, therefore, contracture not recurs. Extended flap and neighboring tissues continued to grow preventing contracture recurrence what is especially important when it comes to pediatric patients. The operation is onestaged; the contracture is eliminated fully and ultimately.