Carbon stock assessment in the vegetation of forest ecosystems has attracted worldwide attention following their role in the mitigation of greenhouse gas and climate change. The aim of the present study was to assess the total carbon stock of trees in the Chitteri reserve forest of the Eastern Ghats in India, based on tree inventory. The entire stretch of the forest covering 742 km2 area was divided into twenty grids of 6.25 km × 6.25 km, and from each grid a transect of size 5 m × 1000 m was established. A total of 5022 live trees (≥ 9.5 cm diameter at breast height) representing 143 species were inventoried from the twenty transects (totaling 10 ha). Carbon stock of each tree was determined by a non-destructive method following standard allometric equation using the tree diameter. The total carbon stock of the tree vegetation for the 10 ha sampled in the Chitteri reserve forest was 585.50 tonnes. The average carbon stock for the twenty 0.5 ha transect was 29.28±21.7 tonne. The minimum and maximum carbon stock estimated for the 20 transects was 1.98 t/0.5 ha and 76.89 t/0.5 ha, respectively. The average carbon stock sequestered by a single tree was 0.12±0.24 t/tree. The maximum carbon value was observed for Mangifera indica (1.73 t/tree) and the minimum was for Glycosmis pentaphylla (0.01 t/tree). However, overall contribution to the total carbon stock of tree vegetation in the Chitteri reserve forest was observed greater for Memecylon edule (8.5 %), followed by Canthium dicoccum var. dicoccum (7.4 %), Anogeissus latifolia (6.4 %), Albizia amara (4.9 %) and Mangifera indica (4.4 %). A significant strong positive relationship was observed between carbon stock with tree density (R2=0.689), but not with tree diversity (R2=0.422) and with altitude (R2=0.399) of forest location.

Carbon dioxide increase is attributed mainly to fossil fuel combustion and deforestation worldwide [1]. The current atmospheric carbon concentration is 397.60 ppm [2]. It is well known that the global climate is changing drastically as a result of natural as well as anthropogenic activities. Development as well as transportation activities is increasing the atmospheric concentration of greenhouse gases especially carbon dioxide [3]. Undoubtedly, climate change is one of the few global issues to receive more attention from the scientific communities in recent years.

Forest ecosystem plays a vital role in the global carbon cycle. Vegetation of global forests covers approximately 27 % of the earth’s land surface, but they form an active carbon sink that accounts for 60 % of the total carbon stored in the earth’s land surface [4]. However, unprecedented increase in anthropogenic activities due to globalization and subsequent industrialization and urbanization lead to a drastic decline and degradation of forest ecosystems of the world [5]. Protecting carbon stocks in the existing forest vegetation have become important to mitigate the increasing carbon dioxide concentration in the atmosphere [6].

Trees are one of the prime components of forest ecosystems besides acting as a major carbon dioxide sink that captures carbon from the atmosphere and storing it in fixed woody biomass by photosynthesis during the growth process. Although, India has a diverse range of forests covering 64 million hectares, no proper carbon assessment and management systems are available to quantify the carbon pool and their regional variation. Hence, the present study is an attempt to assess the total carbon stock of the Chitteri reserve forest of the Eastern Ghats in India.

The Eastern Ghats are a discontinuous range of mountains that run almost parallel to the east cost of India. Chitteri Reserve Forest (CRF), the present study area is one of the hill forests of Eastern Ghats that lies at a latitude of 11°43.5’ to 12°06.0’ N and a longitude of 78°18.5’ to 78°40.5’ E, covering an area of about 742 km2 (Figure 1). The altitude of CRF ranged from 400 m to 1649 m above mean sea level. It is composed of masses of Charnockite associated with gneisses and varied metamorphic rocks. The soil is red, loamy and lateritic in nature. The mean annual temperature for the past two decades is 28.3°C. The annual rainfall is 1058 mm with average rainy days of 61 days. The bulk of the rainfall is observed during August to October.

The entire stretch of the Chitteri reserve forest was divided into twenty 6.25 km × 6.25 km grids. In each grid, a transect of 5 m × 1000 m was established randomly. All live trees ≥ 9.5 cm diameter at breast height i.e. trees ≥ 30 cm girth at breast height were inventoried from the twenty transects [7]. The inventory data were used for the assessment of the total carbon stock of tree vegetation in Chitteri hills.

Where ‘AGB’ is aboveground biomass, ‘BGB’ is below ground biomass, and ‘0.5’ is the conversion factor which represents that the carbon content is assumed as 50% of the total biomass as followed by Takimoto [8], Khan [9], Sundarapandian [10].

Below ground biomass was calculated considering 15% of the aboveground biomass as followed by MacDicken [17], Alamgir [18] and Pragasan [3].

Regression analysis was used to test the relationship between carbon stock and tree density, tree diversity and altitude of the forest location for the twenty transects inventoried in Chitteri. The vegetation of the 20 transects was classified into three forest types viz. semi-evergreen, mixed deciduous and scrub forests. Analysis of Variance (ANOVA) was performed to check the significance of variation in total carbon stock among the three forest types.

Table 1: Tree species density and richness for the twenty grids in the Chitteri reserve forest of the Eastern Ghats in India.

Table 2: Tree biomass and carbon stock for the twenty grids in the Chitteri reserve
forest of Eastern Ghats. 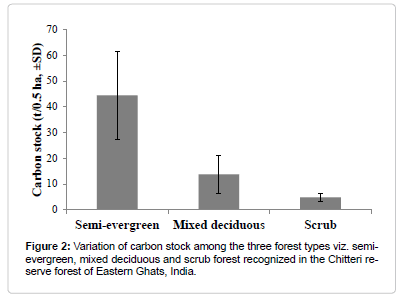 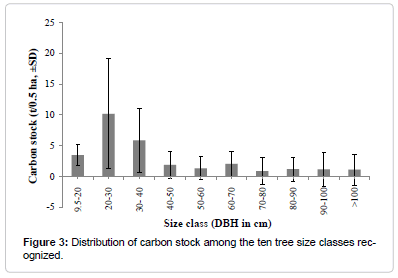 Relationship of carbon stock with density, diversity and altitude of forest location 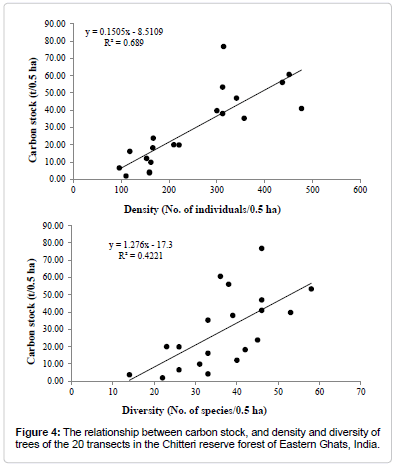 Figure 4: The relationship between carbon stock, and density and diversity of trees of the 20 transects in the Chitteri reserve forest of Eastern Ghats, India.

However, no significant relationship was observed between carbon stock and tree diversity (R2= 0.422; Figure 4) and with the altitude of the forest (R2 = 0.399; Figure 5). 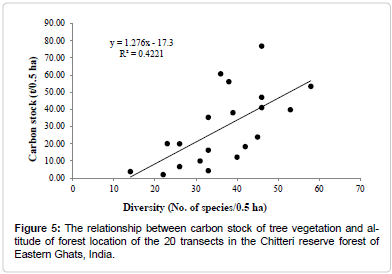 Figure 5: The relationship between carbon stock of tree vegetation and altitude of forest location of the 20 transects in the Chitteri reserve forest of Eastern Ghats, India.

Among the three forest types recognized in the Chitteri reserve forest, the order of carbon stocks can be justified as scrub forest < mixed deciduous < semi-evergreen forest. And, there existed a significant variation in the total carbon stock among the three forest types. This reflects that semi-evergreen forests are better forest type when compared to the mixed deciduous and scrub forests in terms of density as well as carbon stocking potential, and demands priority for conservation.

In the present study, allometric equation following Brown [11] was used to estimate aboveground biomass uniformly for all the three forest types mainly to find the difference in their carbon stocking potential by using a uniform methodology, and also assuming that all the trees were inventoried from the same reserve forest in a tropical region. To get accurate carbon stocking data for CRF species-specific allometric models are warranted, and that can be done by destructive sampling of a few individuals for each tree species.

The results of the present study prove that tree vegetation in natural forest ecosystem acts as storehouse of carbon by storing carbon in their tissues as biomass and thereby reducing the concentration of atmospheric CO2. Natural forests being undisturbed ecosystems prove to be having a great potential of curbing the increasing concentration of greenhouse gas in the atmosphere [3]. 90% of all the biomass organic carbon is stored by the trees on earth which accounts for 500 Gt C, which is close to the total amount of carbon in the atmosphere (750 Gt C). Atmospheric carbon dioxide is highly sensitive to forest destruction hence conservation measures are needed to protect Chitteri reserve forest.

Despite the fact that CRF falls in the reserve forest category, the local people have unlimited access to firewood collection and herding cattle for grazing, besides illegal extraction of timber and non-timber resources. Hence, restoration of the already degraded CRF through tree plantation is necessary to protect the total carbon stock in the forest vegetation. Further, it is necessary to conduct awareness programs for the local people in this regard.

I sincerely thank Dr. N. Parthasarathy, Professor of Ecology and Environmental Sciences, Pondicherry University, for all his support and encouragements.

Copyright: © 2014 Pragasan LA. This is an open-access article distributed under the terms of the Creative Commons Attribution License, which permits unrestricted use, distribution, and reproduction in any medium, provided the original author and source are credited.