A study was conducted to measure carbon stock in two Van Panchayat forest of Garhwal Himalaya. For comparative study, we selected the degraded and non-degraded site in Pine and Oak Forest and estimated total carbon stock (above and below ground). Van Panchayat are managing the forest in Uttarakhand from British Period. The aim of the research was to estimate the tree density, tree diversity,biomass and carbon stocks in degraded and non-degraded sites in both forests for forest management through Van Panchayat. From this research, we found that non-degraded site contains maximum (Density, total biomass and carbon stock) as compared to degraded sites. This paper recommends the importance of forest management committee in Uttarakhand and the world. Community based small scale carbon sequestration can contribute to the solution of global climate change through carbon trading.

Forest carbon sequestration is one of the key approaches to reducing atmospheric carbon concentrations. It is a safe, environmentally acceptable, and cost-effective way to capture and store substantial amounts of atmospheric carbon. The concurrent development of tradable carbon credits provides financial incentives for considering carbon storage in forest management decisions. Climate change is one of the most important global environmental issues, which is likely to impact natural ecosystems as well as socio-economic systems [1]. The global climate has warmed by 0.7°C during the last century and is projected to rise by 1.8-4.0°C during the current century [2]. Under Kyoto Protocol, forests are considered important for their unique role as carbon sinks because they are capable of capturing and storing carbon dioxide from the atmosphere [3]. According to FAO [3], each time there is a forest growth of 2 cubic meters of wood; roughly 1 ton of carbon of the air is captured. Forests act as carbon sink by increasing above ground biomass through increased forest cover and by increased level of soil organic carbon content. Biomass is defined as “mass of all organic matter per unit area at particular time (reported in g/m2 or kg/ha). The above-ground biomass (AGB) is described by IPCC Guidelines for National Gas Inventories (2006) as “all biomass of living vegetation, both woody and herbaceous, above the soil including stems, branches, bark, foliage, bark and stumps”. Forest biomass represents the largest terrestrial carbon sink and accounts for approximately 90% of all living terrestrial biomass. The amount of carbon sequestered (or lost) by a forest can be estimated from the biomass accumulation since approximately half of forest dry biomass weight constitutes carbon [3,4]. Forest biomass can be measured both in terms of fresh weight or in terms of dry weight. The present study is an attempt to estimate the total carbon stock in two VPs forest. Chir-Pine and Banj-Oak that occupied 16.36% and 12.29% of land area, respectively in Uttarakhand. 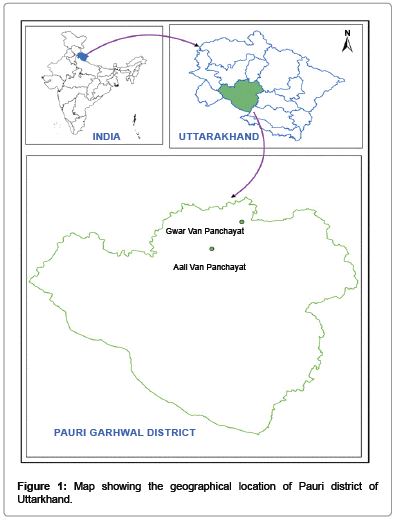 The height and DBH (diameter at breast height) of all the trees falling within the sample plot were measured. CBH was measured by using meter tape at 1.37 m above ground level and height was measured by relay scope. Enumerated diameter classes were divided in to 5 classes at 10 cm of interval. Tree diversity was determined by using Shannon– Wiener diversity index [7] as¯H=−pi ln (pi) where, ¯H is Shannon– Wiener diversity index, pi is the proportion of individuals belonging to species i and ln is natural log (i.e., base 2.718). The growing stock density was estimated using volume tables or volume equations based on the Forest Research Institute (FRI) and Forest Survey of India (FSI) publications for the respective species [8-11]. These volume equations were earlier developed by FRI and FSI using multiple regression methods in which basal area, girth or dbh along with height or form factor were taken into consideration. The estimated GSVD (m3 ha-1) was then converted into Above Ground Biomass Density (AGBD) of tree components (stem, branches, twigs and leaves), which was calculated by multiplying GSVD of the forest with appropriate Biomass Expansion Factor (BEF) [12]. The BEF (Mg m-3) is defined as the ratio of above ground biomass density of all living trees at diameter at breast height (DBH) ≥ 2.54 cm to GSVD for all trees of DBH ≥ 12.7 cm. The BEFs for hardwood, and pine were calculated using the following equations:

Using the regression equation by Cairns et al. [4] the below ground biomass density, BGBD (fine and coarse roots) was estimated for each forest type as following:

The Total Carbon Density (TCD) was computed by using the following formula:

The present study is an attempt to estimate the total carbon stock in two major forest type, Chir Pine, Banj Oak which occupie 7.30 ha and 10 ha land area respectively in Uttarakhand under varying level of disturbance in two Van Panchayat forest in Khirsoo and Pauri block of Pauri district of Uttarakhand. 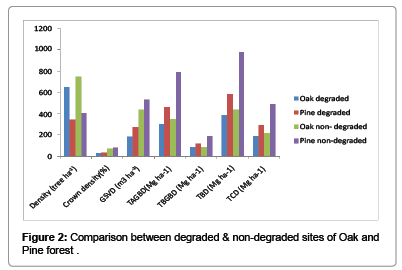 The present study area falls under the protected area which reflects the high percent of carbon stock. A study conducted in Kumaon Himalayan forest [6] on degraded and non-degraded where higher amount of carbon was reported on non-degraded sites because the site was more protected than degraded. This finding was more or less similar to present investigation.

Present investigation showed that high carbon stock was found in Pine forest as compared to Oak forest. Negi et al. [19] observed that the three types have maximum c stored in the order of conifers>deciduous>evergreen >bamboos. It was concluded that most of the conifer-dominated forests have higher carrying capacity of c stock than broad leaf-dominated forest type [11]. In pine forest of Aali Van Panchayat due to absence of ground vegetation. There was no grazing and low dependency of villagers for their basic requirement (fuel, fodder, timber etc), however, in Oak forest of Gwar Van Panchayat, the dependency of the villagers were high due to proximity of forest. Villagers collect fuel, fodder and remove litters for beding materialist and therefore the forest was disturbed. Therefore, the human disturbance also influences the carbon stock of the forest. Ross concluded that land use changes and forestry practices alter the level and rates of carbon storage [20,21]. While leakage (shifting production) may be offset some of the increase is observed in forest carbon sequestration.

Authors are thankful to the our supervisor Assistant professor Dr. D.S.chauhan, and Head of Dept., Prof. N.P.Todaria, Department of Forestry and NR, Chauras Campus, HNB Garhwal University, Srinagar, Garhwal for providing necessary facilities and encouragement throughout the study period.

Copyright: © 2014 Vikrant KK, et al. This is an open-access article distributed under the terms of the Creative Commons Attribution License, which permits unrestricted use, distribution, and reproduction in any medium, provided the original author and source are credited.