Rheumatoid arthritis (RA) is a common autoimmune disease with main features as persistent synovitis, systemic inflammation and progressive destruction of cartilage and bone, which is characterized by angiogenesis and infiltration of inflammatory cells. Although the precise etiology and pathogenesis of RA have not been completely identified, the angiogenesis is implicated in the pathological process of RA [1,2]. In RA, angiogenesis is a mark of the histologic changes of new blood vessels forming with synovial hyperplasia and inflammatory cell infiltration, which supporting pannus growth and development of RA [2,3]. The balance of angiogenesis regulation is broken in RA joints, and the dominated regulatory factors promote the blood vessels’ formation. It has been reported that excessive migration of circulating leukocytes into RA inflamed joints necessitates formation of new vessels to provide nutrients and oxygen to hypertrophic joints [2].

Recently, experiments in vitro and vivo have showed that angiogenic T cells (Tang), a specific T cell subset, were required for colony formation and differentiation of early endothelial progenitor cells (EPC), and were supposed to stimulate the endothelial cells by secreting angiogenic cytokines, including VEGF, IL-8 and G-CSF [4]. Furthermore, Tang cells enhanced the function of endothelial cell and its proliferation, suggesting that it may be viewed as a biomarker for cardiovascular risk [4].

CD147 is one kind of protein membrane surface molecules that is expressed on the surface of all the immune cells [5]. Studies have reported that CD147 participates in thymocyte expansion, T-cell development and T cell activation [6]. Also, our groups found that CD147 may play a crucial role in the process of angiogenesis. The levels of CD147 were significantly positive correlated with VEGF and HIF-1 levels, as well as with vascular density, in RA synovium [7].

In brief, blood and cell supernatant samples were collected and stored at -80°C before cytokine measurements. According to the manufacturer’s instructions, the plasma levels of VEGF, IL-8 and GCSF were measured by Enzyme-linked immunosorbent assay (ELISA) kit (eBioscience, San Diego, CA, USA).

Tang cells were isolated by magnetic cell sorting, After incubated with anti-CD147 mAb (20 ug/ml) and isotype-matched control antibody (20 ug/ml) for 1 h in 37, Tang cells were stimulated with immobilized anti-CD3mAb (plates coated with 5 μg/ml) and soluble anti-CD28 mAb (1 μg/ml) for 10 min in 37. Then cells were fixed with 2% paraformaldehyde and permeabilization with 90% methanol. Then surface and intracellular staining with antibodies include anti-CD3- percp, and anti-pAKT (T308)-PE (all from BD Bioscience). After washed and suspended with PBS, flow cytometry was used to test analysis. In this study, we detected several proangiogenic cytokines including G-CSF, IL-8 and VEGF, which were associated with the differentiation and colony formation of EPC. And as compared to HC, the concentration of plasma G-CSF, IL-8 and VEGF were remarkably increased in RA patients (Figure 2). Furthermore, we assessed if the presence of proangiogenic cytokines in RA was correlated with Tang cells. As shown in Table 2, in RA patients, VEGF level was positively correlated with the Tang cell percentage.

Table 2: Correlations between the concentration of angiogenesis cytokines and the percentages of Tang cells and EPC in RA patients. 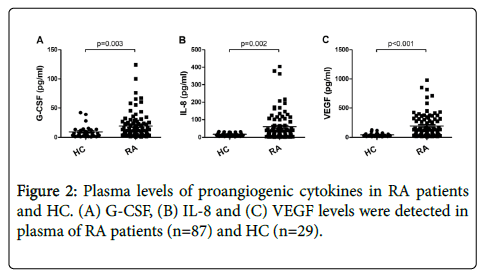 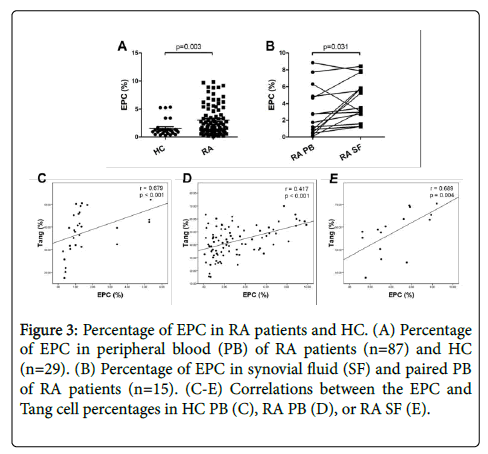 CD147 participates in the function of Tang in RA patients

In the following tests, we detected CD147 expression on Tang cells. Compared with HC, CD147 was more highly expressed on Tang cells in RA patients (Figure 4A). Therefore, cell culture assays were set to detect whether CD147 could affect the function of Tang cells. Our data showed that the average intensity of fluorescence (MFI) of CD147 was significantly up-regulated when isolated Tang cell was activated with anti-CD3/CD28 mAb (Figure 4B). Meanwhile, the levels of VEGF in the activated cell supernatant induced by CD3/CD28 activation were partly inhibited by anti-CD147 mAb in comparison to isotype control mAb (Figure 4C). Furthermore, in Tang cells, CD3/CD28 costimulation resulted in a strong phosphorylation of pAKT (T308). While the levels of pAKT (T308) was significantly decreased by anti- CD147 mAb as compared to isotype control mAb (Figure 4D). It has been revealed that Tang cells may regulate EPC function, and promote the formation of new blood vessels and endothelial repairing through stimulating those functions [4]. Therefore, in this study, the percentages of Tang cells and EPC were comprehensively assessed by flow cytometry in HC and RA patients. Our data showed that the levels of circulating Tang cell percentage was positively correlated with EPC level both in HC and RA patients. Also, the percentage of Tang cells from RA SF was significantly correlated with EPC percentage. Consequently, these findings are in line with the idea that Tang cells were critical in the formation of EPC colonies that can enhance EPC differentiation and angiogenesis [4]. It also indicated that EPC and Tang cell population could be act on angiogenesis responses in RA patients.

However, discrepant results have been reported in regard to the circulating Tang cells level in RA. Suarez et al. [11,12] showed that the percentage of Tang cells was only about 8% and was decreased in RA patients as compared with HC. In agreement with the data of a recent study and our previous research in SLE patients [4,13], we found that the level of Tang cells was about 30-40% in HC and RA patients. In fact, the population studies in ours and Kim et al. [4] work comprised Asians, whereas those of Suarez et al. [12] recruited people from Europe. Therefore, we speculated that the discrepancies in Tang levels may be due to the various ethnic. We believe that further investigations with RA patients from more races and research institutions should be conducted to confirm and extend our current results.

Similar to a recent study in systemic sclerosis patients [14], the most important finding of our work is that the striking Tang cells were increased in RA patients compared with HC. In addition, the percentage of Tang cells in RA SF was higher than in PB. It has been reported that autoantibody status is associated with vasculopathy and cardiovascular risk in autoimmunity diseases, including RA [15,16]. In the present work, among RA patients with positive antibodies, the Tang cell percentages were significantly increased as compared to their negative counterparts and HC. Therefore, these data indicate that Tang cells are involved in the pathological process of angiogenesis in the inflammatory site of RA, although the mechanism under this situation is yet unknown, and suggesting that auto-antibody (RF and anti-ccp) positivity may isolate a subset of RA patients associated with endothelial damage and at higher risk of vasculopathy.

It has been found that CD147 increased in the activated T cells [17,18]. And CD147 was involved in angiogenesis in melanoma [19], hepatocellular carcinoma [20], cervical squamous cell carcinoma [21], and RA [22]. In this study, we firstly identified the association between CD147 expression and Tang cells. Indeed, the expression of CD147 on Tang cells intensely increased in RA patients. VEGF, also known as the most potent proangiogenic growth factors, acts as a growth stimulus and a survival factor for endothelial cells [23]. And VEGF and its receptor were expressed in the synovial tissue of inflamed joints [24]. Accordingly, our data showed that the levels of plasma G-CSF, IL-8 and VEGF were increased in RA patients as compared with HC. Furthermore, VEGF level was significantly correlated with EPC and Tang cell subsets in RA.

In view of CD147 can promote angiogenesis by regulating VEGF in RA [7] and Tang cells are supposed to facilitate early EPC differentiation and stimulate the local resident endothelial cells by producing VEGF [4], we investigate whether CD147 can directly participate in the production of VEGF in Tang cells. It turned out that CD147 expression on the purified Tang cells was further increased after activating, and the anti-CD147mAb (HAb18) significantly inhibited VEGF production from Tang cells, indicating that CD147 could promote the secretion of VEGF in Tang cells.

Then we studied the possible mechanisms of CD147 promoting VEGF secretion of Tang cells. VEGF is the most important regulator in angiogenesis process [25], and VEGF exerts its effects after binding with its homologous membrane tyrosine kinase receptors, while VEGFR2 plays the most important role in VEGF-induced angiogenesis [26]. VEGFR2 upon activation further activates PI3K/AKT pathways, which is considered responsible for endothelial cell proliferation [27]. More importantly, previous study of our lab showed that CD147 upregulates VEGF and promotes angiogenesis by PI3K-AKT signaling pathway in RA synovial tissue [7]. Consistently, we found that CD147 plays an important role in the process of angiogenesis in RA via VEGF, and the possible mechanism is conducted through PI3K-AKT pathway, which can regulate cell proliferation, survival, growth and vitality multiple cellular processes [28,29]. These data suggested that CD147 may affect Tang cells’ function by AKT signaling, at least in RA.

This study had several limitations. Firstly, most of the RA patients in this study were included after treatment. Although the treatment characteristics between analysis groups were nearly equal, further investigations are needed to clarify the expression of Tang cells in treatment-naïve patients. Secondly, as a subset of CD3+ T cells, Tang cells also express CD4 or CD8. Similar to our previous work [13], we believe that further studies are needed to evaluate the profiles of Tang cell subsets (including CD4+ and CD8+ Tang) in RA and the potential role of CD147 in these Tang cell subsets. Finally, the number of patients is restricted and we have not performed follow-up analysis. Thus, further studies with a larger sample size and follow-up observation should be performed to confirm and extend the current findings.

In conclusion, our data indicated that the level of Tang cells rise up, as well as an increasing of EPC, which was associated with the formation of the blood vessel in RA patients. In our study, high levels of Tang were closely related to disease-specific parameters. Specifically, high disease activity and autoantibody positivity were strong indicators of increased Tang cells. Although further studies need to investigate the functionality of these cells at different conditions, curbing Tang cell function might be a promising intervention in RA patients. Importantly, CD147 were highly expressed in Tang cells. The results also highlighted a proangiogenic role of CD147 in RA. CD147 may promote VEGF secretion of activated Tang cells by affecting AKT signaling, which in turn can be conducive to angiogenesis and RA pathogenesis. Upon these facts, further studies of Tang cells and CD147 molecule could be a considerable clinical impact. Our research provided a new point of view for the development of anti-CD147 antibody therapy to RA patients via regulating Tang cells’ function.

This work was supported by grants from the National Natural Science Foundation of China (no.81401338).

Peng Zhao performed most of the flow cytometry analyses and data collection as well as wrote the manuscript. Jinlin Miao and Kui Zhang participated in immunoassays measurements and experimental procedures. Zheng Yu and Qing Han were in charge of patients’ recruitment and clinical data collection. Ping Zhu conceived and coordinated the study, collected the data, performed the statistical analyses and corrected the manuscript. All the authors read and approved the final version of the manuscript.

Copyright: © 2018 Zhao P, et al. This is an open-access article distributed under the terms of the Creative Commons Attribution License, which permits unrestricted use, distribution, and reproduction in any medium, provided the original author and source are credited.