Characteristics of the Skeletal System of Bound Foot: A Case Study

Copyright: © 2014 Zhang Y, et al. This is an open-access article distributed under the terms of the Creative Commons Attribution License, which permits unrestricted use, distribution, and reproduction in any medium, provided the original author andsource are credited.

The human foot play a significant dynamic and static role in controlling some important human motor functions such as stepping, walking, running as well as supporting the body weight. There is a natural anatomical harmony between muscles, bones and articulations in the human feet for it performing various activities effectively. Any type of congenital or acquired defects in the bone or soft tissues of the foot may cause impairments both functionally and aesthetically [1].

Foot binding, the custom of women of Han Chinese in feudal society of China, was an attempt to stop the growth of the feet in order to control the shape and size. It normally begins between the ages of four and seven. During that time, about 60 to 80% of the female have suffered from this painful treatment and endured associated difficulties of movement for their lifetime [2]. Steven et al. reported that the foot deformities due to binding have left women more prone to fall and less able to squat or rise from a chair which directly affected their daily activities [3]. Women with bound feet also had been reported to have lower femoral neck bone and hip density. These problems would increase the risk of hip fractures in the women.

Women with bound feet are disappearing gradually in China. There have many literatures investigating the history or process of Chinese foot binding [2,4,5], but no detailed information available nowadays relate to current detailed anatomic data. This work represents a new study to characterize the deformed skeletal system of bound foot based a case of health subject in China. The goal of this investigation is to create an up-to-date database of bound foot anatomy incorporating the principal of bone structure.

An elderly woman, lived in a remote and underdeveloped village of Shandong Province, consent to take part in this study. The subject was 92 years old, 47.5 kg in weight and 153 cm in height. When she was 7 years old, her mother began to bind her feet with bandages which were not to be removed, except for periodic washing, until she was married. The patient’s feet belonged to Talipes Calcaneus type Figure 1 according to a report which classified the foot binding into two systems, namely, Talipes Calcaneus type and Talipes Equinus type [6]. 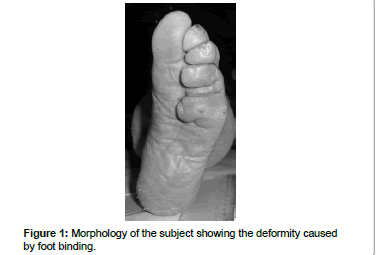 Figure 1: Morphology of the subject showing the deformity caused by foot binding.

Due to the complex morphology of the foot and the necessity of obtaining accurate modeling of the bone structure in terms of 3D anthropometrical characteristic, we performed the foot anthropometrical definition using CT scans of the foot with a slice distance of 1mm on a Phillips® Brilliance CT machine. The scanning was taken on both feet at their neutral position. The DICOM images generated in the CT scan were then processed with a medical imaging and editing software (MIMICS® 10.01), then used to obtain the 3D models of right foot using density segmentation techniques. 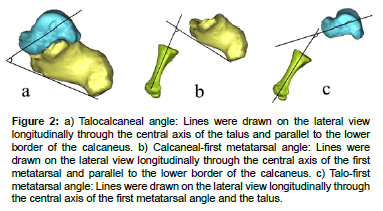 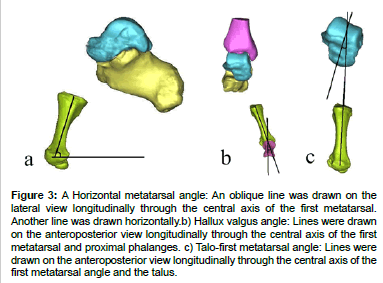 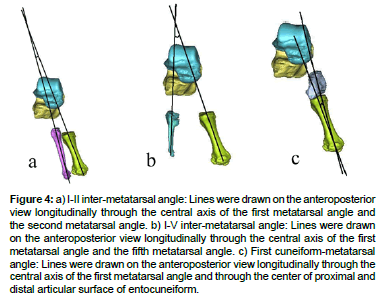 The rank of metatarsus length was successfully determined rather than the actual length as no ratio between the foot model and real foot was available. Based on the measurements, the longest metatarsal was found to be the second metatarsal, followed by the fourth, the third, the first, the fifth metatarsal in a descending order, respectively. The measured angles in the current study were shown in Figure 6. The talocalcaneal relationship was evaluated by TCA on the lateral view. The relationship between the hind foot and forefoot was evaluated by the TMT-LAT, TMT-AP and CMT. Compared to the data of normal feet from a previous document, CMT and TMT-LAT in bound foot were obviously smaller but the other angles were greater [7]. The HMA in bound foot was greater than the angle in normal feet [8]. These parameters indicated that foot binding has resulted in high arch. It is documented that the diagnostic criteria for hallux valgus was either I-II IMA was ≥ 10°, or HMA was ≥ 20°, and was with apparent hallux valgus or accompanied with bunions [9]. Following these criteria, it could be concluded that the bound foot investigated in this study doesn’t belong to the case of hallux valgus. 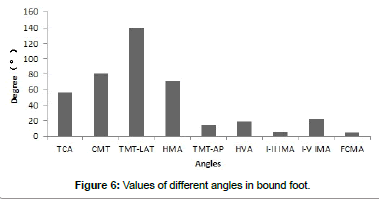 This is a new study with current data representing the foot bone structure of women with bound foot. The results demonstrated that foot binding process led to sharp deformation of the second to fifth toe and extremely high longitudinal arch but did not cause hallux valgus as established by means of reconstructing 3D foot model. Based on analysis of key procedures of a foot binding process, these following factors might have contributed to the foot deformation. Firstly, the bandages bent down the four small toes towards the sole of the foot and forced the heel to move inward, exaggerating the arch. The four small toes were pushed down and bent at the inner side by the external force imposed resulting in the deformation of metatarsophalangeal joints. Secondly, the binding of the feet was done with cloth at the start when the subject was only seven years old. The bandages were not supposed to be removed, except for periodic washing, until she was married. At that age, the bones were still not fully mature and the epiphyseal cartilage was growing up together with the ossification process. However, with the growth and development of the feet, the deformation of epiphysis became much more severe due to the continuous external force exerted.

It is known that the pescavus is characterized by a raised medial longitudinal arch and is structurally rigid and non-shock absorbent [10]. The rigidity of the structure could be attributed to the change in the rear foot and forefoot deformities involving the medial longitudinal arch. The results of TCA, TMT-LAT, TMT-AP, CMT and HMA in the current study indicated that foot binding gave rise to pescavus. The deformities of pescavus resulted in shortening of the foot and an overload of heel and metatarsal heads causing callus formation, metatarsalgia, sesamoiditis and plantar heel pain, as well as a reduction of contact area. All these would adversely affect instability of the rear foot and make the foot unsuitable for the repetitive stress of athletics and easy to become fatigued with walking/standing over a long period of time [11-14].

The bound foot model clearly revealed that the serious deformity of the second to the fifth toe in women with bound feet might result in a situation that the big toe bears higher peak pressure to compensate the abnormal of the other toes. Toes could grip surface or objects, possessing the function which could enlarge the weight-bearing area so that the forefoot force won’t be sustained by the metatarsal heads alone [15]. A previous study has established the importance of toes in walking [16]. When the great toe reached the peak pressure recorded under the whole foot and the central toes took more pressure than the lateral metatarsal heads.

This work has developed up-to-date new data for the structure of bound foot. Women with bound foot are so rare in modern society with subjects in a healthy state; the data is of significant importance to the research in this culturally important topic. However, it was insufficient that only one subject analyzed, the foot’s skeletal feature might not be fully representative of other cohorts. Although the main ways of foot-binding process were similar in the whole country, there might be individual differences of foot bone deformities caused by the external force generated from bandages, and control process during binding. Further study is to be carried out to link the key characteristics of bound foot to biomechanical data through further analysis and computational modelling.