Characterization of Novel Biosurfactants Produced by the Strain Fusarium oxysporum

A biosurfactant-producing strain, Fusarium oxysporum, was isolated from crude oil polluted soil sample collected from automobile service station of Hosur, India. The biosurfactant was extracted from the culture sample and the purified extract weighed 1.02gm. The extract when analyzed with TLC produced brown spots with iodine vapors indicating that the surfactant is of lipid composition. The FTIR spectra recorded for the compounds produced by fungal species Fusarium indicated the presence of functional groups –COO- and CH2 groups. The NMR spectral studies of the compounds produced by Fusarium were identified to be two major esters namely ester of 25-methyl-heptacosanoic acid and ethyl ester of 9-methyl-hexadecanoic acid. Based on the molecular masses and fragmentation patterns of GC-MS conducted, the structures of the compounds were confirmed to be methyl esters of 25-methyl-heptacosanoic acids and 9-methyl-hexadecanoic acids. The compounds identified in the present study, being fatty acids are good emulsifiers and promisingly good biosurfactants.

The surfactants are molecules that are capable of interacting at interfaces and reduce surface and interfacial tension [1]. At present, surfactants are derived from petroleum. To reduce production costs, the choice of inexpensive raw materials is important. The production of biosurfactant has been reported in different microorganisms like Bacillus, [2] Pseudomonas [3]Acientobacter and Arthrobacter species [1,4]. In recent years considerable attention has been given to isolate these biosurfactant-producing microorganisms because of their potential commercial utilization [5]. The present study focuses on the biosurfactant production by Fusarium oxysporum, on which studies are limited.

All surfactants have two distinct components in their molecular structure. A hydrocarbon part, which is poorly soluble in water, is called the hydrophobic or lipophilic group. Usually the hydrophobic moiety is C8 to C22 alkyl chain or alkyl aryl group where the alkyl chain can be linear or branched. The other part of the molecule, which is water soluble, is known as the hydrophilic group. Biosurfactants accumulate at gas/liquid, liquid/liquid, and liquid/solid interfaces as it has both hydrophobic and hydrophilic moiety. Surfactants are especially known for their wetting qualities and for their efficiency as emulsifiers [6]. They also possess functional properties like foaming, phase separation and viscosity reduction of heavier crude oils.

Biosurfactants vary in their chemical properties and molecular size [7]. Most of the surfactants produced by the microbes are complex molecules, comprising different structures. They include glycolipids, phospholipids, fatty acids, peptides and glycopeptides. The results of the spectroscopy analyses by IRTF and NMR has settled down the chemical structures of the biosurfactant from P.aeruginosa BIOMI E5 strain, which confirmed to be rhamnolipids. In the present investigation with Fusarium oxysporum, purification and structural studies involving HPLC, FTIRR, GC and NMR biosurfactants produced were confirmed to be as fatty acids.

Three litters of Czepak’s culture broth taken in a five liter conical flask was induced with 3ml of crude oil and inoculated with the attenuated spore of Fusarium oxysporum strain and was allowed to grow for 9 days in an orbital shaker at 120 rpm at 30°C. The cells were harvested on 9th day. The culture was centrifuged at 10,000g for 15 minutes at 4°C and the pellet were discarded. The supernatant was refrigerated overnight to remove the sediments and centrifuged at 10,000 rpm and was used for further processing.

Residual crude oil fraction was removed by slight cyclohexane treatment. The resulting supernatant was taken in a separating funnel and equal volume of chloroform: methanol was added and shaken vigorously. The methanol: chloroform layer was separated from aqueous layer and collected in a small round bottom flask and the extract was air dried in an evaporatory rotor under vacuum at 30°C.

The dried extract was dissolved in Chloroform: methanol mixture and then applied to Silica-gel 60 column (2.5 × 60cm) equilibrated with chloroform: methanol. The column was eluted with different gradients of same solvents and fractions were collected for identification of biosurfactant [8].

Pre-coated TLC plates (Merck) were spotted with samples and developed with the following solvent systems, chloroform/methanol/acetic acid at 85:15:2. The components on the plates were detected with iodine vapors [9].

Identification of functional group of the biosurfactant by FTIR spectra

The extract was subjected to FTIR spectral studies and recorded. The individual peaks in the spectra were identified as per spectroscopic identification of organic compounds and labeled for the corresponding functional groups.

The Fusarium extract collected in eppendroff tubes were dissolved in chloroform, dimethyl sulphoxamide and deuteriated methanol. The 1H and 13C NMR was recorded for the sample on AMX-400 NMR Spectrometers. NMR analysis was performed in NMR research center, Indian Institute of Science, Bangalore-560 012, India.

The GC-MS analysis of the extract was carried out to identify the nature of the components present. The GC-MS spectra were recorded in GC-MSD FISONS instruments GC 8000 series and MD800.The column used was of dimension 30m × 0.25 µ × 0.25 µ DB5MS column. 2µL of the sample was injected by split less injector at the rate of 1ml/min using Helium as carrier gas. The initial oven temperature was maintained from 100-235°C with increase of 6°C /min at 235°C with 1 min hold time and then setting the temperature to 235-260°C, with rise in temperature of 4°C /minute at 10 min hold time. The source temperature was 200°C and interface temperature 250°C, with 70ev-energy and EI + 50-700 m/z. GC-MS analysis was performed at South India Textile Research Association, Coimbatore-41, India.

The purified extract weighed 1.02 gm. The extract when analyzed with TLC produced brown spots with iodine vapors indicating that the surfactant may be of lipid composition. The FTIR spectra were recorded for the compounds produced by fungal species Fusarium. (Figures 1-4). The individual peaks in the spectra identified and labeled for the corresponding functional groups, indicated the presence of –COO- and CH2 groups. These functional groups may be the integral part of organic acids or esters present in the biosurfactant. 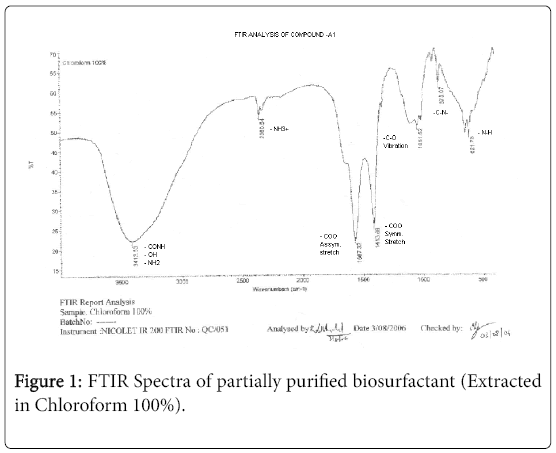 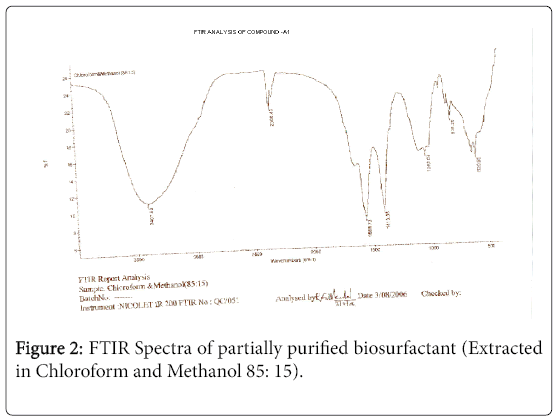 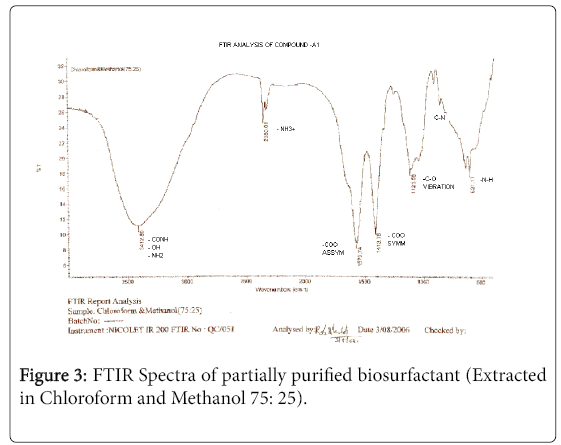 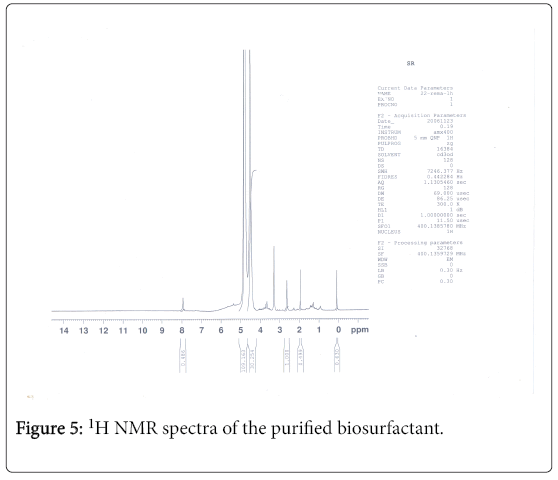 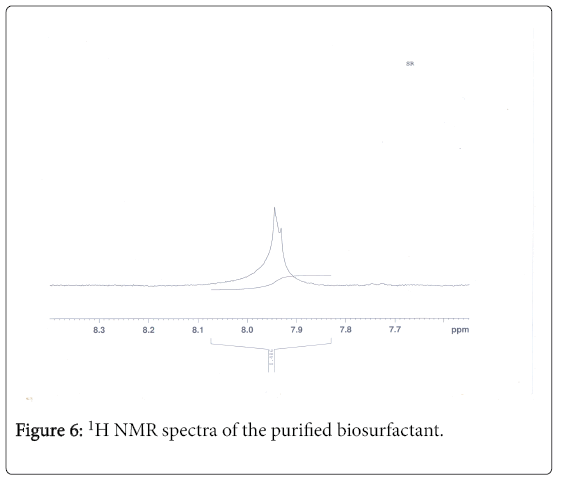 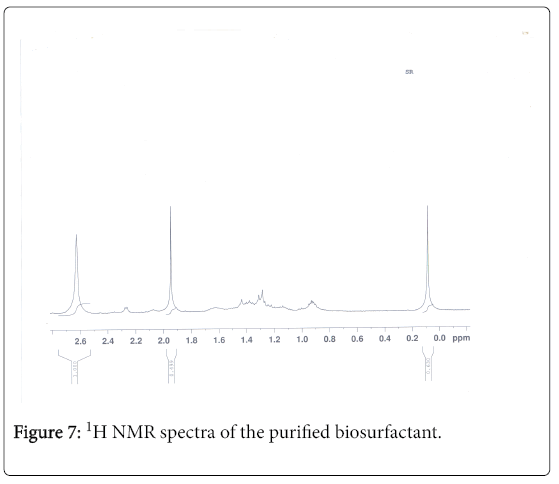 The aliphatic carbon signals were generally observed between 0 and 60 ppm. The high intensity signals at delta 37.75 and 46.70 ppm were due to methyl, methylene and methane carbons of the compounds. The very low intensity signal at delta 175 ppm was certainly characterized to carboxylic acid group carbon. The spectral studies, thus identified two major esters namely ester of 25-methyl-heptacosanoic acid and ethyl ester of 9-methyl-hexadecanoic acid (Figures 8-11). 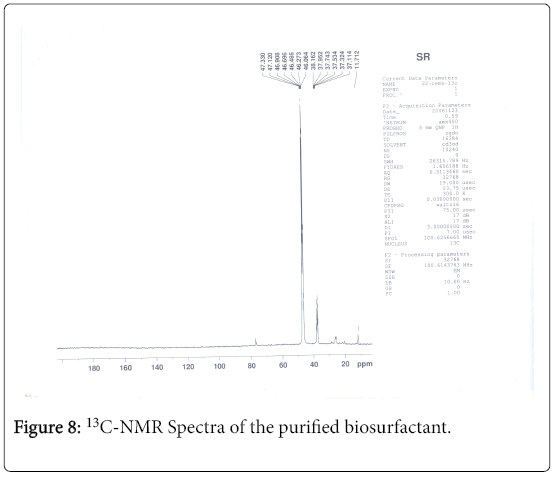 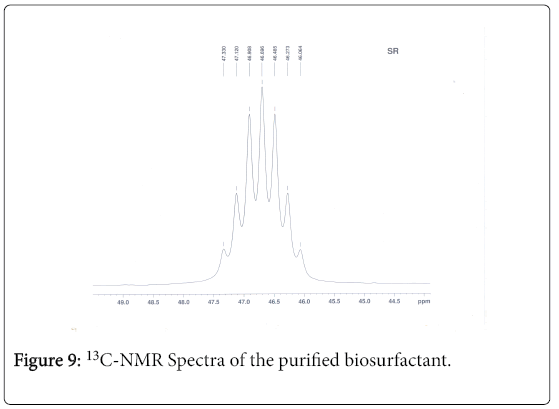 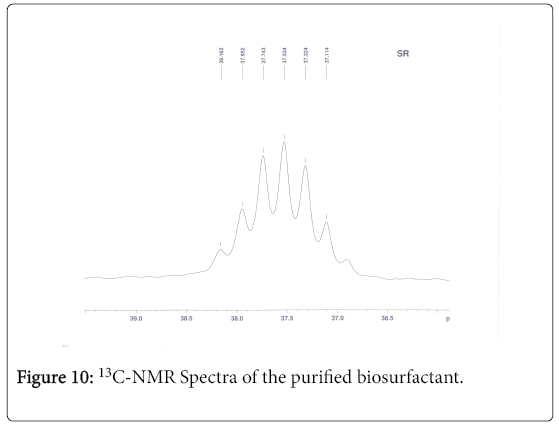 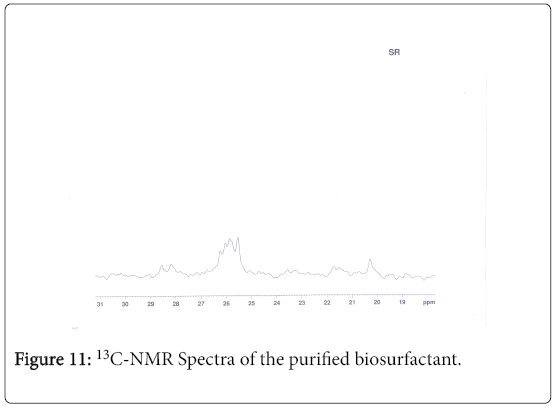 The GC-MS analysis of the extract was carried out to identify the nature of the components present. The presences of two major and minor compounds were evident from the chromatogram of the extract (Figure 12). From the library of GC-MS spectra, the major components present were the esters of heptacosanoic and hexadecanoic acid acids. They were confirmed from the molecular ion and (M+1) peaks in GC-MS spectra. The molecular masses of the compounds represented (Figures 13 and 14) were found to be 284 and 438. The characteristic fragmentations at 143, 87, 74 and 55 (m/z) indicate that they are due to methyl ester of fatty acids. Based on the molecular masses and fragmentation patterns, the compounds were identified as methyl esters of 25-methyheptacosanoic acid and 9-mehtylhexadecanoic acid. 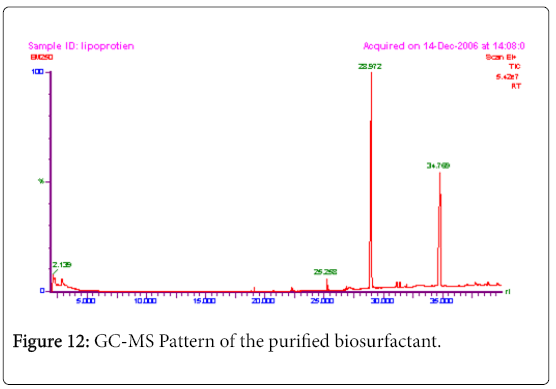 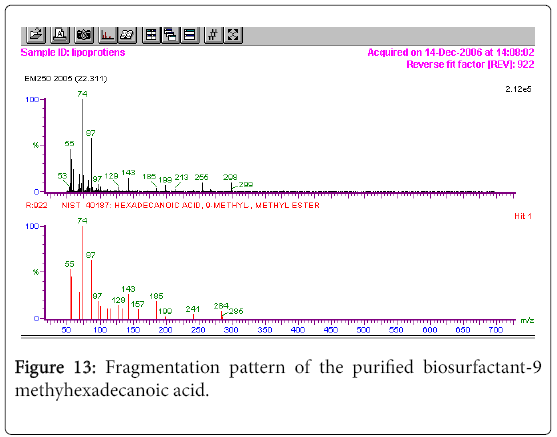 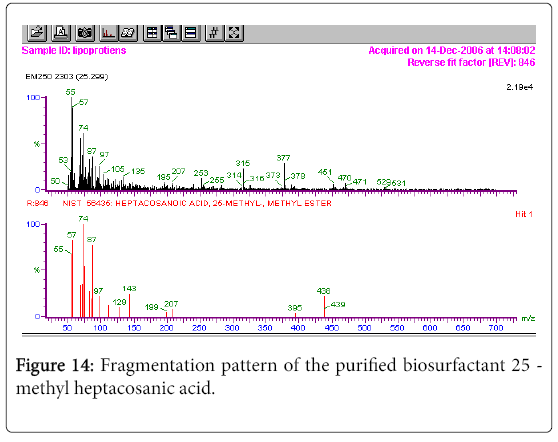 Structures of the compounds are:

The fragmentation compounds are

The ability of a surfactant to enhance the biodegradation of slightly soluble organic compounds depends on the extent to which it increases the bioavailability of the compound. Research has demonstrated that biosurfactants when compared to those of synthetic surfactants show different properties such as excellent protein-binding action, selforganization, and antitumor action.

Kim et al. [15] characterized mannosylerythritol lipid produced by Candida sp. SY16, the hydrophobic moiety, fatty acids of the biosurfactant to be hexonic, dodecanoic, tetradecanoic and tetradecenoic acid by gas chromatography-mass spectroscopy and the structure of the native biosurfactant was determined to be 6-Oacetyl- 2, 3-di-O-alkanoyl-beta-D-mannopyraosyl- (-1-->4)-O-mesoerythritol by NMR analysis.

In the present study the 1H-NMR spectrum of the extract from Fusarium the methylene protons were observed with high intensity. The observed two signals for methylene protons were due to the attachment of methylene groups to more I effect carbonyl group on one side and terminal methane group on other side of the fatty acid. The spectral studies, thus identified two major esters namely ester of 25-methyl-heptacosanoic acid and ethyl ester of 9-methylhexadecanoic acid. From the GC-MS spectral analysis, the major components were found to be the esters of heptacosanoic and hexadecanoic acid acids. The characteristic fragmentations indicate the presence of methyl ester of fatty acids. The compounds were confirmed as methyl esters of 25-methyl-heptacosanoic acid and 9-methylhexadecanoic acid.

The important feature of fatty acid is that the carboxyl end of the molecule is polar and hence soluble in water whereas the hydrocarbon end is non-polar and soluble only in organic solvents. It is more soluble in organic solvent and less soluble in water. This type of dual solubility form emulsions when mixed with water. In an emulsion the tiny globules formed have hydrophobic water repelling groups buried inside, away from water and the hydrophobic group sticks outside [9]. In conclusion, the compound identified in the present study can be a best emulsification agent as it is a fatty acid.

Copyright: © 2017 Santhappan R, et al. This is an open-access article distributed under the terms of the Creative Commons Attribution License, which permits unrestricted use, distribution, and reproduction in any medium, provided the original author and source are credited.