Chilaiditi Syndrome as A Cause of Respiratory Distress: A Case Report and Review of the Literature

Copyright: © 2014 Mesquita BM, et al. This is an open-access article distributed under the terms of the Creative Commons Attribution License, which permits unrestricted use, distribution, and reproduction in any medium, provided the original author and source are credited.

Demetrius Chilaiditi first described in 1910, a radiographic finding of hepatodiaphragmatic interposition of hollow viscera, colon or bowel, referred to as Chilaiditi sign [1].

Chilaiditi sign is found incidentally in 0.025%-0.28% of chest and abdominal plain films [2], and 1.1%-2.4% of chest/abdominal computed tomography [CT] scans [3], and is usually asymptomatic. It is more common in the elderly population where the incidence is 1% [3], but there have been cases where it was presented in patients as young as 5 months [4], with a male-to-female ratio of 4:1, including all age ranges [5].

Chilaiditi syndrome is defined by the presence of symptoms caused by this abnormal anatomic positioning of the bowel and can be self-resolving or a chronic condition [6].

Mild presentation includes RUQ abdominal pain, abdominal distention with bloating together with nausea and vomiting, as well as changes in intestinal habits [5,7].

There are sporadic reports of severe presentation, with fever and peritoneal signs on contrast radiography due to complete obstruction with progressive worsening clinical course unresponsive to non operative management [5,6,12]. The incidence of a combination of these multi-organ symptoms is very low, and is even lower in children [7].

We present a case report of Chilaiditi syndrome in a 5 year old child with multi-organ involvement. In this case the presentation included acute right upper quadrant pain accompanied by the more unusual manifestations such as cough and respiratory distress owing to the interposition of the large bowel between the liver and the diaphragm causing an increase in the thoracic pressure.

He had productive cough and respiratory difficulties in the last 2 weeks, without fever, which had not improved with inhalation therapy.

His past medical history includes asthma treated during exacerbation only, with two pneumonia infections during the past two years with resolution after antibiotic treatment. He also describes a bowel pattern characterized by one hard, dry stool daily, with episodic use of stool softeners as polyethylene glycol [PEG]. The patient had considerable flatus, and reported abdominal distention which was maximal towards the end of the day.

He had neither a history of acute dermatitis nor of other allergic diseases and was not on any medication except PEG. His family history was negative for any gastrointestinal condition.

Upon admission physical examination [23.0 kg, BMI 16.8], he was afebrile, presenting with normal vital signs, with a respiratory rate of 29 breaths/min and pulse oximetry of 98% in room air.

Chest auscultation revealed mild bilateral crackles with diminished sounds at the axillary area of the right lung. The abdomen was slightly distended without hepatosplenomegaly. There were no signs of rebound tenderness, guarding, or ascites with normal peristaltic sounds. Examination was otherwise unremarkable.

General laboratory tests did not reveal any significant alterations.

In the ER, his first plain chest and abdominal X-ray studies revealed an elevation of the right hemidiaphragm caused by the presence of a dilated colonic loop interposed between the liver and right diaphragm (Figure 1 and 2), which did not change in the lateral decubitus position (Figure 3). No signs of intestinal obstruction were seen. 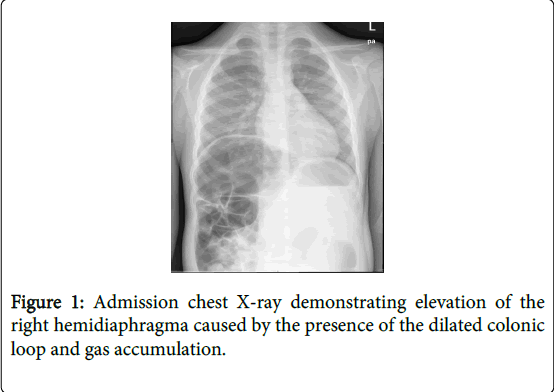 Figure 1: Admission chest X-ray demonstrating elevation of the right hemidiaphragma caused by the presence of the dilated colonic loop and gas accumulation. 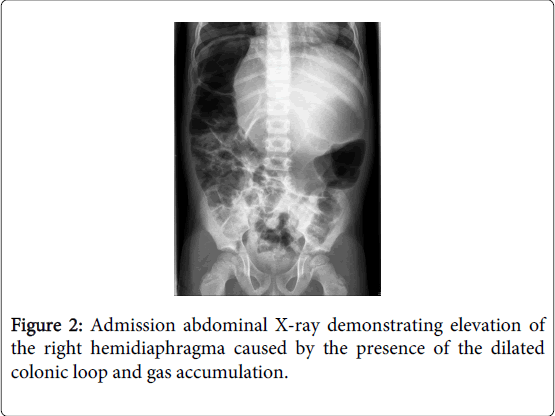 Figure 2: Admission chest X-ray demonstrating elevation of the right hemidiaphragma caused by the presence of the dilated colonic loop and gas accumulation.

Abdominal ultrasonography was subsequently performed, but neither free fluid not other abnormalities were observed. The Chilaiditi syndrome was diagnosed on the history of recurrent respiratory distress and Chilaiditi sign was suspected upon radiologic findings.

As the anatomical distortion could also be partially aggravated from his functional disorder, such as chronic constipation [colonic elongation and redundancy], a fleet enema was performed so to reduce the quantity of air and fecal content in the large bowel.

Improvement, within one day, of his respiratory distress and complete resolution of his acute abdominal symptoms occurred. A repeat chest and abdominal x-ray did not demonstrate the previous image of right subphrenic hyper transparency (Figure 4 and 5). Figure 4: A repeat follow-up chest X-ray 1 day after admission following bowel decompression (by an enema), did not demonstrate the previous image of right subphrenic hyper transparency with repositioning of distended intestine back to the normal position beneath the liver. Figure 5: A repeat follow-up abdominal X-ray 1 day after admission following bowel decompression (by an enema), did not demonstrate the previous image of right subphrenic hyper transparency with repositioning of distended intestine back to the normal position beneath the liver.

Thus, bowel decompression documented by a follow-up radiograph confirmed both the diagnosis of the condition and the success of the therapy, by showing the disappearance of sub diaphragmatic air and repositioning of distended intestine back to the normal position beneath the liver.

The child was discharged home after 72 hours, symptom free.

At 2 week follow-up, the patient maintained complete resolution of his abdominal pain with improved regularity of bowel movements and greatly decreased flatus.

His respiratory symptoms including the cough resolved as well.

Anatomically, Chilaiditi sign may be divided into anterior and posterior types according to the position of the interposed bowel relative to the liver [13]. The interposed bowel is most commonly the hepatic flexure, ascending colon, or transverse colon but involvement of the small bowel, either alone or in combination with the colon, has been reported [14,15].

The exact pathophysiology is unknown, but is thought to occur due to multiple reasons, including congenital or acquired factors. These factors may operate singly or in combination [6,14].

Any condition leading to an enlarged right subdiaphragmatic space or hypermobility of the intestines may facilitate the Chilaiditi syndrome onset as they change the anatomical relationship between the liver, colon and diaphragm. Such Predisposing factors can be divided into intestinal, diaphragmatic/pneumonic, hepatic and other miscellaneous causes [4] (Table 1).

Table 1: Predisposing Factors for the Development of Chilaiditi’s Sign [adapted from source: A. X.Yin [4]].

In healthy individuals, Chilaiditi’s syndrome is generally attributed to an increase in the length, diameter and motility of the colon [16]. Others intestinal factors include mostly, megacolon, dolicocolon, meteorism, abnormal colonic motility, chronic constipation and gastrointestinal malignancies [involving the colon, rectum, or stomach] [17,18]. The diaphragmatic and pneumonic predisposing factors include, diaphragmatic thinning, phrenic nerve injury and excessive aerophagia, chronic obstructive pulmonary disease, changes in intrathoracic pressure as in cases of emphysema and pulmonary malignancies [19,20]. Among the hepatic factors are reduced liver volume due to cirrhosis [liver atrophy or relative atrophy in the medial segment of the left lobe of the liver] and right lobe segmental agenesis, or liver ptosis due to relaxation of ligaments. Other miscellaneous causes are an enlarged lower thoracic outlet or elevated intra-abdominal pressure [15] [ascites, pregnancy], obesity, scleroderma [14], congenital hypothyroidism, paralytic ileus [14], pneumatosis cystoides intestinalis [21], melanosis coli [13,14], and mental retardation [13-15,22].

To diagnose Chilaiditi sign based upon radiologic findings, the following criteria must be met; the right hemidiaphragm must be adequately displaced superiorly above the liver by the intestine, pseudoperitoneum caused by air in the bowels must be seen, and the superior margin of the liver must be positioned below the level of the left hemidiaphragm [23].

Traditionally, Chilaiditi sign is an important clinical finding as it had been mistaken for free air under the diaphragm on a plain x-ray [subphrenic abcess, pneumoperitoneum], and has thus lead to unnecessary exploratory laparotomies [22,24]. Chilaiditi’s sign, or pseudopneumoperitoneum, may be differentiated from true pneumoperitoneum by close inspection of x-ray imaging for normal plicae circulars or haustral markings of the colon under the right hemidiaphragm [3,22,24]. Moreover, the radiographic findings of Chilaiditi sign by plain radiographs will not move with change in position by lateral views [haustration is better visualized on lateral views] and by left lateral decubitus views with horizontal X-ray beam angulation, unlike pneumoperitoneum [25]. On the latter, the free air tends to remain in the subphrenic space [16].

Similarly the ultrasonographic findings of Chilaiditi syndrome will show a "gas echo" over the right hepatic lobe that does not move with change in position of the patient, as opposed to a patient with pneumoperitoneum [25]. CT scan of the abdomen and pelvis has been increasingly used to confirm the diagnosis, potentially limiting the likelihood of unnecessary surgeries.

Furthermore Chilaiditi syndrome can be initially misdiagnosed as a sub-diaphragmatic hernia as has been suspected initially but ruled out later on in our patient. Interestingly, there have been reports in the literature of bowel interposition accompanied by a right sided Bochdalek hernia [26].

No intervention is required for an asymptomatic patient with Chilaiditi sign.

As for Chilaiditi syndrome, the management is usually conservative, and should include intravenous fluid therapy, nasogastric bowel decompression, stool softeners and/or enemas including a high fiber diet for constipation. Furthermore management of aerophagia as well as change in decubitus and weight loss may be useful as well [3,9,11,12].

Rarely, emergent surgery may be required, for intestinal obstruction, ischemia, or cecal perforation, with resection or, most commonly, fixation of the interposed viscus. Cases of volvulus generally require urgent surgical intervention with either colectomy [perforation and gangrene] or colopexy [3,4,9].

Although Chilaiditi sign is a rare entity overall, this challenging diagnosis should be considered when a patient has a radiologic finding of air below the right diaphragm and presents with abdominal and/or respiratory symptoms. Our patient presented with respiratory difficulty, although this condition was later defined as intestinal pseudo-obstruction, causing the symptoms of abdominal pain and distention as well as respiratory distress. In our case constipation is likely a significant contributor to colonic motility, given its reported association with colonic elongation. Indeed his multiorgan symptoms improved with laxatives and dietary changes. Our patient also had considerable flatus, a finding noted with aerophagia in many symptomatic cases.

This case illustrates a rare but clinically important syndrome as a combination of mutiorgan system involvement.

To conclude, awareness of this syndrome as well as Chilaiditis sign is essential for all care providers due to its important clinical ramifications, potentially limiting the likelihood of unnecessary surgeries. Attention should be paid to factors predisposing patients to the development of Chilaiditi syndrome and treatment altered accordingly.