Child, Adolescent and Young Adult Suicides: A Comparison Based on the Queensland Suicide Registry

Copyright: © 2015 Kolves K, et al. This is an open-access article distributed under the terms of the Creative Commons Attribution License, which permits unrestricted use, distribution, and reproduction in any medium, provided the original author and source are credited.

Objective: The incidence of suicides increases rapidly up to the age of 20 years. Despite major developmental changes, only a limited number of studies has compared characteristics of child, adolescent and young adult suicides. The aim of the current study was to compare demographic, psychosocial and psychiatric characteristics of suicides in three youngest age groups - 10-14 years, 15-19 years and 20-24 years - in Queensland, Australia, between 2002 and 2011. Methods: The Queensland Suicide Register (QSR) contains information from a variety of sources, including: police report of death to a Coroner, post-mortem autopsy report, toxicology report and Coroner’s findings. Annual suicide rates were calculated by gender and age group. Odds Ratios (OR) with 95% confidence intervals (95% CI), Chi2 test are presented. Results: Between 2002 and 2011, there were 850 youth suicides recorded in the QSR - 43 aged 10-14 years, 295 aged 15-19 years and 512 aged 20-24 years. The proportion of males increased with age (51.2%, 69.5% and 76.6%). However, the proportion of Indigenous people decreased significantly with age (45.2%, 18.1% and 14.5%). Hanging was the most frequent suicide method for all age groups and for both genders, decreasing significantly with age for both genders. Prevalence of a diagnosed psychiatric disorder, substance use and psychiatric treatment increased with age. Evidence of untreated mental health problems was reported without significant differences between age groups. Similarly, there were no significant differences in history of previous suicide attempts and communication of suicide intent. Suicide in social group and attention to suicide in media, family conflict, school/ work-related problems and childhood trauma decreased significantly with age while relationship problems increased. Conclusion: Suicides in early adolescence were characterised by higher prevalence of family conflicts, schoolrelated problems and suicides in social groups. Suicides in young adults had significantly higher prevalence of psychiatric disorders and were much more impacted by relationship problems. The characteristics of suicides in late adolescents fell in between the other age groups.

The incidence of suicide increases rapidly throughout teenage years. While globally suicide rates are approximately 1 per 100,000 in the age group 10-14 years, they rise almost 10-fold in age group 15-19 years [1,2]. This phenomenon is not unexpected, as it coincides with major developmental changes of a maturing young person. Suicide rates stabilize in early adulthood [3].

Suicides in adolescents are impacted by a variety of factors including: psychological, psychiatric, genetic, social and cultural factors [4]. Although there are several studies focusing on adolescent suicide and suicidal behaviours, only a limited number compare characteristics of child and adolescent suicides, or adolescent and young adult suicides [5]. Considering major developmental differences between these groups, the aim of the current analysis was to examine demographic, psychosocial and psychiatric differences in suicides in three youngest age groups – children/early adolescents (10-14 years), late adolescents (15-19 years) and young adults (20-24 years) - in Queensland, Australia, between 2002 and 2011.

The QSR is a comprehensive suicide database maintained by the Australian Institute for Suicide Research and Prevention (AISRAP). The QSR holds the records for all suicides in Queensland since 1990 and is currently the only research database of suicides in Australia. The information comes from a variety of sources, such as police report of death to a Coroner (Form 1), post-mortem autopsy report, toxicology report and Coroner’s findings, including narrative of circumstances of death (who the deceased person was, and how, when and where the person died).

Documents are crosschecked with records from the National Coronial Information System (NCIS). Following the Suicide Classification Flow Chart, (developed by AISRAP), all suicide cases in the QSR are classified into one of three categories: Beyond Reasonable Doubt, Probable, or Possible [6]. For the present analyses only those cases falling into the categories of either Beyond Reasonable Doubt or Probable are included.

In order to compare two age groups, Odds Ratios (OR) with 95% confidence intervals (95% CI) were calculated. Age group 15-19 years was used as reference group when calculating OR. With small numbers (less than 5), Fisher’s exact test was used. SPSS 22.0 was employed for all data analyses. 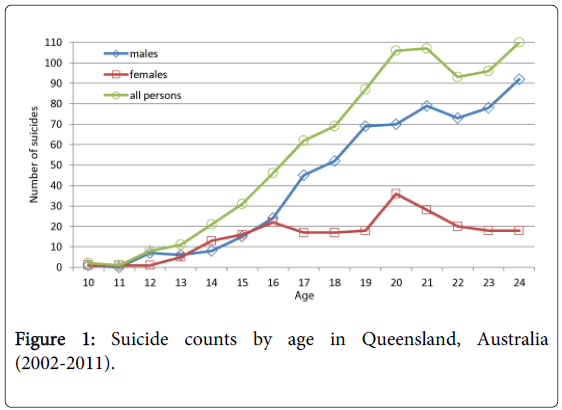 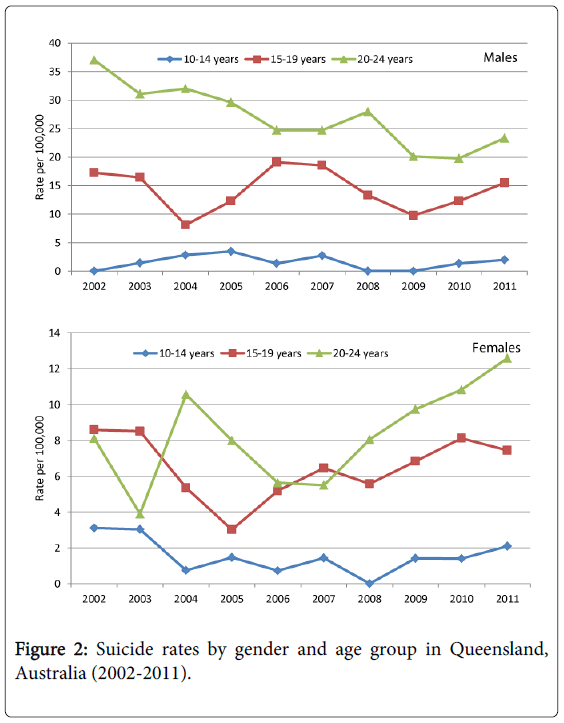 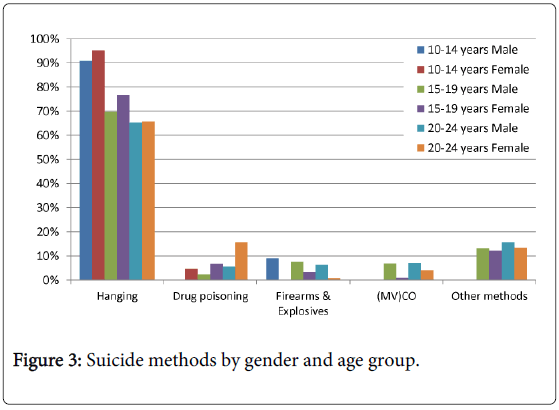 Table 1: Prevalence of different characteristics among young people who died by suicide.

was significantly lower in children aged 10-14 years who died by suicide (Table 1). Figure 4 presents the 6 most frequent psychiatric disorders. Unipolar depression was the most frequent in age groups 15-19 years and 20-24 years, and developmental disorder in the youngest age group. Indication of an untreated mental health problem was reported without significant differences between age groups, respectively 25.6%, 27.9% and 32% (growing with age). 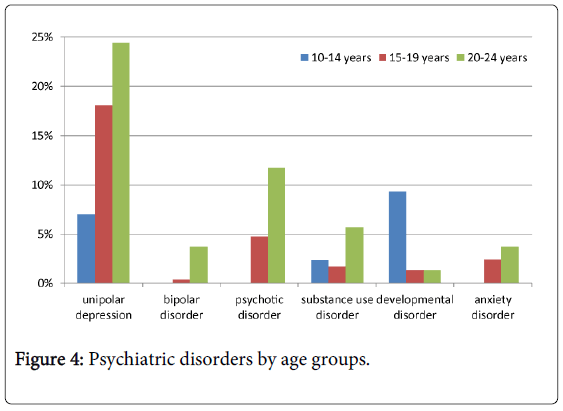 Approximately every five young person who died by suicide one made a previous suicide attempt, and more than a third communicated their suicide intent in the previous 12 months, with no significant differences between the three age groups (Table 1). Suicide in social group and attention to suicide in media were both highest in the youngest age group and decreased with age (Table 1).

Suicide numbers and rates increased rapidly with age, especially for males, contributing to the growing gender cap. Similarly rapid growth for males, until age 20 years, was presented in a recent analysis of UK and Ireland [3]. The aim of the current study was to analyse differences in the characteristics of suicide by young people below the age of 25 years by comparing three age groups: 10-14 years (children/ early adolescents), 15-19 years (late adolescents) and 20-24 years (young adults). Our cut-off points might not be ideal, considering major developmental, emotional and cognitive changes occurring between the age of 10 and 24 years. However, the end of childhood, beginning of adolescence and end of adolescence and beginning of adulthood are not clear-cut periods. Nevertheless, this approximate categorisation has been endorsed by the American Academy of Child and Adolescent Psychiatry [7].

Restricting access to means has proven to be the most effective activity to reduce suicide numbers [12]. Our analysis showed very high prevalence of hanging with over 90% of early adults using this method of suicide. Although hanging significantly declined in with age, it remained over 60% for both genders in age group 20-24 years. It is important to note that hanging seems to be further decreasing with age in Queensland; in age group 35-54 years hanging accounted for 44% of suicides in 2008-2010 [6]. There is a possibility that high prevalence of hanging in younger age groups might indicate to a possible underreporting of suicides using other methods (e.g. running into traffic, jumping from height), especially in children, a fact that has been indicated in research [13]. Considering that the QSR classification of suicides is based on research classification and does not depend on coronial inquests, there is lower probability of missing suicide cases.

Family and school are the most important social institutions in child and adolescents’ life. Adverse events and changes in social environment can have an important impact. Similarly to some earlier studies, children who died by suicide had significantly higher prevalence of family conflicts [14,15] and school/work-related problems [5] compared to suicides in adolescents. Prevalence of both types of life events decreased with age, while prevalence of relationship problems (including conflicts and separation) increased with age [5,14]. Already in age group 15-19 years, relationship problems played an important role, being present in 40% of cases.

Prevalence of diagnosed psychiatric disorders also increased with age, and this might be related to the onset of major psychiatric disorders during adolescence [16]. A few studies have presented lower prevalence of psychiatric problems in children/early adolescents aged below 15 years compared to older adolescents [14,17] and to older adults [5]. Our analysis showed that a diagnosed psychiatric disorder was present in 21% cases of suicides in early adolescence, 29% in late adolescence and 42% in early adulthood. In addition, it is important to note that over one-fourth in all age groups had indication of an untreated mental health condition. However, it is rather concerning that nobody in the youngest age group had contact with mental health professionals in relation to their condition in last three months before suicide.

Despite remarkable differences in the prevalence of psychiatric disorders, there were no significant differences in the prevalence of a previous suicide attempt and communication of suicide intent in the previous 12 months and during lifetime, which contrasts with some previous studies [18]. Suicide in social group and attention to suicide in media seem to particularly affect early adolescents, being significantly more frequent in the age group 10-14 years and decreasing with age.

The QSR is a comprehensive suicide mortality database; however, several limitations may hinder the accuracy of results. Considering that data are reliant on external sources such as police or coronial information along with the conjecture of next of kin, accuracy of information depends on the quality of investigating possible suicide cases. Some information that might be relevant for a better understanding of that person’s death can go unrecorded if the investigating officer does not systematically enquire about it. In addition, accuracy of data may also be hindered by the informant’s lack of knowledge of a particular aspect of the deceased’s life (e.g., presence of medical or psychiatric diagnosis, precipitating life events).