Copyright: © 2017 Khorsandi D, et al. This is an open-access article distributed under the terms of the Creative Commons Attribution License, which permits unrestricted use, distribution and reproduction in any medium, provided the original author and source are credited.

Generally known as the “Fifth Disease”, Erythema Infectiosum is a condition primarily characterized by its lacy exanthema like a slapped cheek appearance. This disease is generally targeted to young kids (some as young as toddlers) due to intact with human parvovirus (Erythrovirus). Early stages of symptoms begin within the 7 days’ time frame after the infection from PV-B19. The symptoms usually last for 2-3 days. They symptoms of “Erythema” include fever, severe headaches, sore throat, pruritus, coryza, and abdominal pain. Following a week of symptoms free period, the infection progresses through different stages as below: Phase1: The Infection starts with a red slapped cheek appearance. However, the appearance usually fades over 3-4 days. Phase2: This phase occurs after some time and is regarded as “erythematous maculopapular rash” that turns into a lacelike reticular pattern. Phase3: Frequent defrayal and relapses may occur for weeks or months due to inducements such as heavy excursion due to exercise, body stress, or exposure of skin to direct sunlight or bathing in hot water (which may lead to skin burns/overheating). The analysis of erythema infectiosum is constructed on clinical presentations. However, an examination of patients with the general symptoms is not necessary. Patients with major signs of symptoms related to human parvovirus (PV) B19, and woman who are pregnant need to have frequent examination of infection. Medical tests like; IgM assays, radioimmunoassay (RIA) Enzyme-linked immunosorbent (ELISA) Polymerase chain reaction (PCR) assay and Loop-mediated isothermal amplification, are some good tests to check the infection status on patients. As erythema infectiosum is only an initial childhood disease which is self-limited. Parents can follow a brief checkup regarding the condition of Infection. On the contrary, erythema infectiosum can be cured by using nonsteroidal anti-inflammatory drugs (NSAIDs). The drugs can help to get rid of the major symptoms like fever, malaise, headache, along with topical antipruritic and antihistamines (which also relieve pruritus). It is also recommended for patients to drink plenty of fluids and rest well.

“Erythema infectiosum” is usually a very mild infection. Its most common symptom is a slap like red patch or rash on children’s cheeks. It is mainly caused by a virus called parvovirus B19. These viruses can extent from one person to another through precipitations or exudations (e.g. saliva, sputum). For pregnant woman, it can also pass to her fetus. The “Fifth Disease” virus can sincerely cause serious illness to children and pregnant women with anaemia (low red blood cell count) for example–“sickle cell anaemia” [1-2].

The Parvovirus B19 causes the illness of fifth disease. Children in such has in elementary school are often targeted by this virus, as it easily tends to spread through saliva and respiratory secretions. It is most common during the winter seasons (as well as spring), but the virus can target its patients at any time and at any age. Elementary and middle schools are often targeted with outbreaks of B19 infections [3-6].

While the illness is “not severe” in most cases, children with immune deficiency (such as those with AIDS or leukemia) or patients with certain blood disorders like anaemia or haemolytic anaemia may become seriously ill with fifth disease. Parvovirus B19 is a major factor in temporarily slowing or completely stop the body's production of red blood cells [7].

In addition, fifth disease is also apparent in adults over the age of 40. About 80% of adults with fifth disease have joint aches and pains (arthritis) which may become long-lasting illness. Symptoms include stiffness in the morning, redness and swelling of the same joints or both sides symmetrical" arthritis (involving the knees, fingers, and wrists). Adults usually have antibodies that prevent them from developing virus like fifth disease because of previous exposure during childhood. However, when the virus is infected as adults, the symptoms can get very severe and alarming.

Women during pregnancy (who have not been previously exposed to the illness) should avoid contact with any patients who have the fifth disease. This virus can infect the fetus prior to the birth and can cause the death of the unborn fetus. The risk of fetal death increases to 5-10% if the mother is diagnosed with the fifth disease.

To define more on its nature, human parvovirus B19 is a common human pathogen associated with a wide variety of diseases. B19 belongs to the Parvoviridae family. The disease usually starts with a mild rash on children (also known as: Erythema infectiosum) [1], but in some cases more major symptoms can be associated to B19, (like acute or persistent arthropathies). Major issues results in critical failures of red cell production, Hydrops fetalis, fetal loss [5], myocarditis [6], or hepatitis. Parvovirus B19 is currently the only known member of the genus Erythrovirus, stating that the B19 is a high tropism for erythroid progenitor cells.

On the contrary, there are other human viruses that can tentatively be considered to be erythroviruses. Human segregate the erythoviruses into multiple [3] genotypes, B19-, LaLi-, and V9-related viruses, based on nucleotide sequence comparisons [8]. Simian parvovirus (SPV) [9], pig-tailed macaque parvovirus (PtPV), and rhesus macaque parvovirus (RhPV) [10] have also been projected to be members of the Erythrovirus genus. Little is known about the molecular basis of infection and pathogenesis of these viruses. The glycosphingolipid globoside has been suggested to be the cellular receptor of B19 [11] but is not sufficient for viral infection [12]. Recently, α5β1integrin was described as a cellular coreceptor of B19 that is required for viral entry into human cells (Figure 1) [13]. 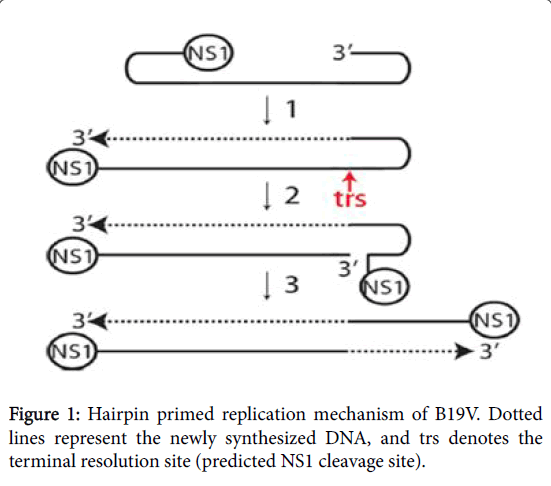 B19V is a single-stranded non-developed DNA virus of 5594 nucleotides, with an internal coding region flanked by palindromic sequences capable of forming terminal hairpin structures (NCBI entry NC_000883.1). The viral genome encodes five known, and a possible sixth, protein products: VP1 and VP2 that compose the viral capsid, NS1, the main replicative protein, and two or three smaller proteins of unclear function (7.5 kDa, 11 kDa, and an open reading frame for the putative X protein) [10-12]. In addition to erythroid precursor cells, which are permissive for viral replication, B19V can infect a number of different cell types, utilizing the globoside or blood group P-antigen as a receptor13 along with α5β1 integrin [14]. After entry, the viral DNA is shuttled to the nucleus with the host-encoded DNA repair protein Ku80 [15] where replication and transcription occur concurrently following initial conversion of the viral DNA to double-stranded DNA [16,17]. Expression is thought to occur utilizing a single viral promoter, with mRNA for the different gene products produced from different splice variants [11,18,19]. Binding sites for several cellular transcription factors are found in the viral promoter [20,21] which can be trans activated by host factors as well as by the viral NS1 protein [20]. Viral replication utilizes cellular proteins, proposed to be coordinated by the viral NS1 protein [22] and is thought to make use of the terminal hairpins.

The single-stranded DNA genome of B19 is packaged into a nonenveloped, icosahedral protein shell of 280 Å in diameter [14]. The capsid consists of 60 structural subunits, 95% of which is the major viral protein VP2 (58 kDa) [15]. The other structural protein, VP1 differs from VP2 only in an N-terminal ‘‘unique region’’ composed of 227 additional amino acids, which are mostly located outside the virion and, therefore, accessible to antibody binding [16,17].

The Fifth Disease usually has a nurture period of one to two weeks and is spread mostly through aerosolized respiratory droplets. Infection also occurs through intact of someone else’s blood products and for pregnant women, it east to spread from mother to fetus.

The early stages of symptoms begin approximately 6-7 days after the exposure to the infection and usually last 2-3 days. The most common symptoms (Although can be serious) include fever, headaches, abdominal pains, arthralgia’s, pruritus and coryza. The above mentioned symptoms are more accustomed/common in adults than in children. The symptoms majorly hit as joint symptoms (up to 50% of adult patients).

The usual appearance of red slapped-cheek, on young children’s and even adults is clear indication of fifth disease. The bright red, raised erythema appears abruptly over the cheeks and is marked by nasal, perioral, and periorbital sparing, as demonstrated in the image below [3]. The exanthem may appear like sunburn, occasionally is edematous, and typically fades over 2-4 days (Figure 2). After few days the second phase, it later identified by an erythematous maculopapular rash on proximal extremities, mostly in arms area and extensor surfaces and trunk, which eventually turns into a lacelike reticular pattern as affected areas clear [3]. The palms and soles usually are spared, and pruritus is rare (Figure 3). Children and adults affected before may frequently see reappearances for weeks to months. Reappearances may occur due heavy exhaustions, body stress, and exposure of skin to direct sunlight or even to hot waters that may prevail rash.

Other characteristics of the rash are as follows:

In adults who are exposed to fifth disease, their rashes are often pruritic.

Enanthems have never been observed. They are hard to identify.

The rash is observed in approximately 75% of human parvovirus (PV) B19–infected paediatric patients but in less than 50% of infected adults.

Often rashes reappear, but that does not mean that the patient is still infectious.

After catching the infection of PV-B19, the infection in adults, proceeds with an acute polyarthropathy result than it is in usual erythema infectiosum. The process of polyarthropathy starts with a typical prodromal illness and some cutaneous aspect of erythema infectiosum but more often manifests simply by a new onset of symmetrical joint pain. These cases are more common in women and can cause several complications.

In decreasing order of frequency, Metacarpophalangeal and/or interphalangeal areas, knees, wrists and ankles are the most commonly affected sites.

Although, medical problem like rheumatoid arthritis take time to develop and get worrisome, joint pains can get worse over the day, while no joint destruction occurs. The synovial fluid is acellular and without of any viral particles. An association with DR4 histo compatability alleles is recognized.

As a childhood disease, many parents can only check for symptoms and conditions with basic intervention steps. Patients with history or with symptoms of arthalgias or pruritus can test and check by using oral analgesics, antihistamines or topical antipruritic lotions.

Parent should avoid and completely restrict children from direct contact of sunlight. To avoid infection, children should use sunscreen lotions to protect their skins from direct sun heat.

The following referrals are made for patients with erythema infectiosum:

• Obstetrician/gynaecologist: Due to potential complications from intrauterine human parvovirus (PV) B19 infection refers pregnant women who have IgM antibodies to PV-B19 or who have been exposed to the virus.

Patients with general erythema infectiosum require no need to be segregated from others. However, patients with severe aplastic crisis or immunosuppression with human PV-B19 infection should be segregated with a danger or spreading the disease.

Women nurses and pregnant health-care workers should be informed of the potential risks to the fetus from PV-B19 infections. It is not recommended for any hospital to allow these women in treatment of patients with chronic parvovirus infection or patients with human PV-B19–associated aplastic crisis.

Pregnant women in contact with patients in the incubation period of erythema infectiosum or with aplastic crisis have a relatively low potential risk of infection. They can be referred for obstetric follow-up care for possible serologic testing and close fetal monitoring.

Due to high prevalence of human PV-B19 infection and low incidence of fetal effects, pregnant women should be restricted from workplace where erythema infectiosum is occurring and cause serious harm.