Copyright: © 2016 Llueca A, et al. This is an open-access article distributed under the terms of the Creative Commons Attribution License, which permits unrestricted use, distribution, and reproduction in any medium, provided the original author and source are credited.

A 23-year-old woman, nulligravida, without any coexisting disease, with negative familiar cancer history, presented irregular vaginal bleeding for last two months, sometimes as a menstruation and others as a spotting. Routine gynecological screening were normal (the last one was a year ago).

Exposure to DES was denied. Gynecological examination revealed cervical polypoid lesion of 3 x 0.5 cm. The patient underwent surgery for a cervical conization. Histopathological examination showed papilar and tubular proliferations and clear cell adenocarcinoma (Figures 1 and 2). All other biochemical, hematological and radiological tests were within normal limits. Contrast-enhanced computed tomographic scan did not reveal any suggestive lesion of malignancy. The patient was therefore diagnosed as a case of CCAC of cervix, FIGO stage IBI. She underwent radical trachelectomy of cervix (Figures 3 and 4) with bilateral pelvic lymph node dissection and both interiliac sentinel node. Sentinel node intraoperative results were negative. Histologically results were negative and there was no residual tumor at the cervix. FIGO stage IBI was confirmed. 18 months after the surgery, no signs of recurrence have been detected. 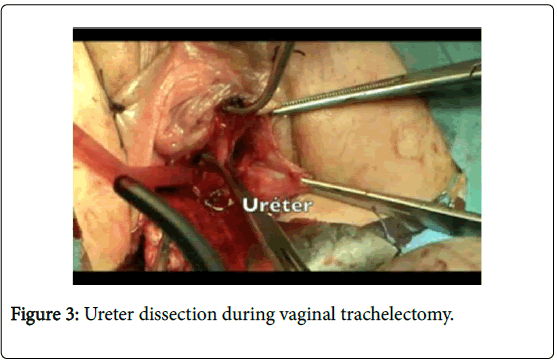 The absence of specific symptoms, as in our patient, makes the diagnosis more difficult. The current diagnostic methods could be less effective. These factors together could delay the correct diagnosis and worsen the prognosis for patients [2,7].

Surgical resection is important for survival. Although radiotherapy is commonly used instead of surgery to treat adults with cervical cancer, surgery should be considered the treatment of choice for children or young adolescents due to the risk of radiation brosis of the bladder and bowel loop [8]. Carboplatin and paclitaxel regimens have comparable response rates for the treatment of advanced adenocarcinoma of the cervix without toxicity [9].

The selection criteria for radical trachelectomy are a desire for pregnancy, confirmed diagnosis of cervical cancer (any histological type except for neuroendocrine tumour and sarcoma), tumour size equal to or less than 2 cm, less than 50% stromal invasion, FIGO stage IA1 with LVI, IA2 or IB1, absence of any evidence of metastasis in or away from the pelvic lymph nodes, and age under 40 years [10,11].

Dargent et al. [12] first described “fertility sparing” trachelectomy for women with cervical cancers less than 2 cm [12]. Our patient is in her reproductive years so conservative management of early-stage cervical carcinoma is the best option. Recurrence and death rates (4.2% and 2.8%, respectively) of radical vaginal trachelectomy (RVT) seem to be comparable to classical radical abdominal hysterectomy. It appears that RVT's overall recurrence and death rates were similar to early-stage cervical cancer treated by radical hysterectomy or radiotherapy. Furthermore fertility results of RVT seem to be promising. A 70% pregnancy rate was reported in the women who wanted to conceive following RVT, though such patients should be informed about the risk of second trimester loss and preterm delivery [13-16].

In conclusion, in young patients with early stages CCAC of the cérvix without risk factors a fertility sparing approach could be considered as one of the options of treatment.