Ever since our earth came into existence, natural processes have been shaping its climate swing it towards warming and cold episodes. Post 1970, greenhouse gas (GHG) emissions were found to be responsible for the recent warming of our climate. The ways how these natural and anthropogenic drivers drive our climate through positive and negative feedbacks is the key to a stable climate. Climate change is a reality that has happened in the past and is inevitable in the future, but its prediction in the short and longer term is crucial for sustaining life and our environment. Our understanding of climate change is based on geological proxies and observed data, which are ridden with uncertainties. The past climate was never in the balance, but improving our understanding of the aspects of climate feedbacks and their interaction with the earth system processes is the key to future climate.

During the past million years, the average temperature of the Earth’s surface has risen and fallen by about 5 degrees through major ice age cycles, which were initiated by subtle variations in the Earth’s orbit and solar activity variations through potential feedbacks like release of carbon dioxide and methane into the atmosphere during warmer phases as suggested by ice core measurements [1]. Past records show that climates can shift abruptly due to persistent natural processes and their amplified feedbacks. Some 56 million years ago, there was a rapid increase in temperature assumed to be triggered by the unexplained release of greenhouse gases. This is comparable to current anthropogenic emissions, which indicates that natural drivers could trigger climate changes which are as severe as the current catastrophic anthropogenic greenhouse emissions and land use changes.

Climate proxies provide evidence of climate change over geological time, which are both discrete and come with a low precision which though are reliable but are difficult to evaluate against the continuous and high precision observed data of the last century. On the other hand observed data record for climate is too short to be able to predict future climate with high confidence. Present influence of climate drivers is difficult to model owing to our poor understanding of their periodicity and cycles though some are much better understood than others. Solar activity which is attributed to the past ice ages between the 17th and 19th centuries (Figure 1), is better understood and modelled. We are currently at the onset of another cooling phase that is slated to continue until the end of this century, as per the predictive modelling of solar activity [2] (Figure 2) which has been hypothesized by Ruddiman [3] to be being delayed owing to anthropogenic warming of the climate. Volcanic activity and resulting aerosol emissions is another predominant natural driver has been attributed to missing summer in some regions, but its prediction is problematic to be included in future prediction models. The 20th century climate change is primarily driven by increases in anthropogenic emissions of long-lived greenhouse gases, aerosols particulates and albedo variations resulting from rapid industrial growth and urbanization respectively. Although anthropogenic drivers today outweigh the natural drivers (Figure 3), but natural influences on the climate system have been persistent and at times matched the proportions of present day anthropogenic drivers. 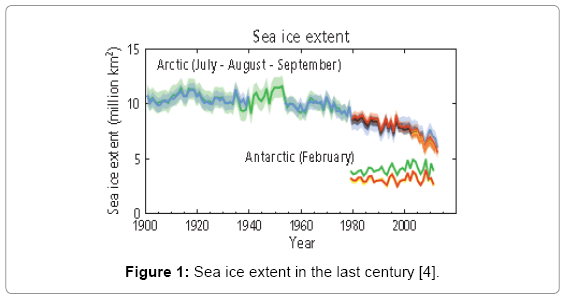 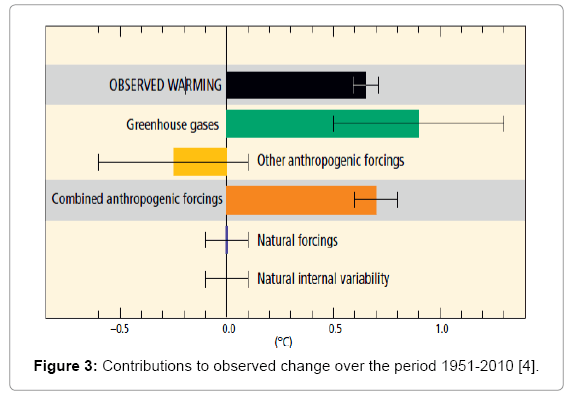 Earth as a natural system balances to changes in our environment through a mechanism of feedbacks. The anthropogenic increase of GHG is impacting the water, carbon and nitrogen cycles resulting in natural climate feedbacks, some of which are positive (clouds, precipitation and reducing snow cover) and negative (greening of forests). These feedbacks trigger changes on earth, which result in shifting vegetation and climate patterns. A striking example is the contrasting changes in ice extent in the Arctic and the Antarctic (Figure 1), an evidence of the natural balancing act.

Future climate change and its risks and impacts are substantiated by observed and modelled data that tilts the balance towards the influence of anthropogenic emissions over natural drivers in the 20th century. This is perceived as a climate disaster in the making threatening habitability of life on earth and had led to many policy makers into thinking that reduced anthropogenic emissions by developed and developing economies as the only solution. Acting solely in this direction could lead to hindered growth and development of several economies resulting in social and geopolitical disasters. Predicting future climate involves climate models, which factor the influence of various climate drivers, both anthropogenic and natural. The level of confidence of the inputs depends on how well is the individual influence of each driver influence and their amplifying or diminishing feedback is understood. There have been significant improvements in reducing the gap between observed and modelled predictions, but there still exist several uncertainties which need to be addressed. The Representative Concentration Pathways (RCP) have been developed using Integrated Assessment Models (IAMs) as input to a wide range of climate model simulations to project their consequences for the climate system [4] (Figure 1). This provides what-if scenarios for the future solely based on different anthropogenic emissions with an improved understanding. Areas like short and rapid interactions between aerosol and cloud interactions and the effect of black carbon on snow needs to be improved and attributed to climate drivers [5] (Figure 4). Continued research on understanding the balancing effects of various catastrophic and persistent climate drivers and their feedback would lead to better models and future climate predictions. This would provide better understanding of the complex interactions between various climate systems and their terrestrial and extra-terrestrial influences which could shift the balance towards better climate predictions in short and long term. 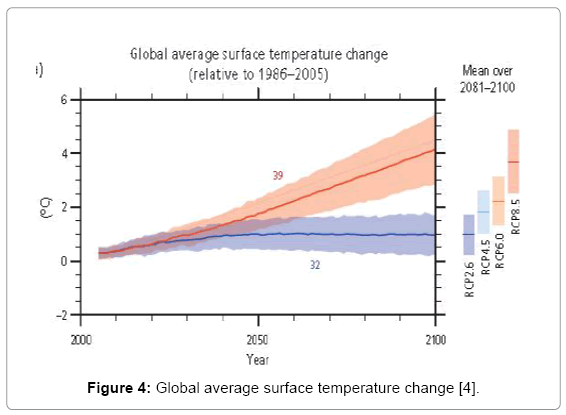 Copyright: © 2015 Kundu SN. This is an open-access article distributed under the terms of the Creative Commons Attribution License, which permits unrestricted use, distribution, and reproduction in any medium, provided the original author and source are credited.