Clinicoepidemiological Profile and Predictors of Mortality in LBW Babies:A Hospital Based Observational Study

Ishtiyaq Q*, Aijaz AM and Qazi I

Copyright: © 2016 Ishtiyaq Q, et al. This is an open-access article distributed under the terms of the Creative Commons Attribution License, which permits unrestricted use, distribution, and reproduction in any medium, provided the original author and source are credited.

Introduction: Low birth weight has a significant impact on the survival of a newborn. Low birth weight babies are at risk for a number of serious clinical problems and as such contribute to overall neonatal mortality and morbidity. Aims: The aim was to study the clinicoepidemiological profile and predictors of mortality in low birth weight babies in resource limited settings. Materials and methods: This was a prospective observational study conducted from July 2013 to May 2015. The study group included neonates admitted in NICU having birth weight less than 2500 gms. Newborns with congenital or chromosomal anomalies were excluded from the study. Data was collected regarding various epidemiological and clinical parameters and entered as per a preset proforma. Results and inference: Total of 100 eligible LBW newborns were studied. Incidence of LBW admission was found to be 17.3%. There were 26 deaths among LBW neonates. Birth weight, gestational age, mechanical ventilation, shock on admission, NEC, sepsis, and CRIB score were found to have a statistically significant association with mortality.

Low birth weight has been defined by the World Health Organization (WHO) as weight at birth of less than 2500 grams (5.5 pounds) [1]. This practical cut-off for international comparison is based on epidemiological observations that infants weighing less than 2500 grams are approximately 20 times more likely to die than heavier babies [2]. India, the most populous country in South Asia shares a very high prevalence of low birth weight babies (LBW). The incidence of low birth weight in India has been reported to range from 21% to 33% as compared to 4.5% in industrially developed countries [3]. Survival of LBW infants is a rising trend more so in developed countries. However LBW neonatal deaths continue to constitute a major part of infant mortality rate in developing countries. A number of indicators like birth weight, gestational age, apgar score, antenatal steroids, gender and CRIB score have been evaluated in low birth weight neonates for predicting mortality in different studies. However there is paucity of studies done in evaluating low birth weight neonates with reference to risk factors associated with their mortality and there epidemiological characteristics in our resource limited settings.

This study was conducted in the neonatal I.C.U Skims Soura. The sample consisted of all those neonates admitted in NICU, who were born as LBW. The cut off weight for including the neonates in the study was taken as birth weight of less than 2500 gms. All those neonates who were born with congenital malformations or chromosomal anomalies were not included in the study. Eligible candidates were followed up to 28 days of postnatal life. A detailed history was collected about the baby as well as the mother. Relevant data regarding course of events during the gestational period was sought.

A detailed general physical and systemic examination was performed. Gestational age was recorded according to LMP and by new Ballards scoring. A CRIB score was assigned to each baby based on gender, gestational age, presence or absence of congenital malformations, base excess on admission, minimum and maximum Fio2 requirement during first 12 hours of admission. During the NICU stay monitoring for common neonatal problems like sepsis, meningitis, hypoglycaemia, hyperglycaemia, hypocalcaemia, polycythaemia, jaundice, hypoxia/acidosis, necrotizing enterocolitis, feed intolerance, hypothermia etc. was done. Investigations were done as required according to the condition of the neonate. The daily examination, complications and investigations during the NICU stay were entered as per the preset proforma. The study collected data about the outcome of NICU stay during first 28 days of life. The neonatal outcome was studied and various risk factors were assessed with regard to their statistical significance in predicting mortality in LBW neonates.

34 patients had shock out of which twenty five 25 died and nine 9 survived. Within 66 neonates without shock 65 survived and only 1 patient died. This difference was also statistically significant (p<0.001).

14 neonates developed NEC out of which four 4 were discharged and 10 died. Among 86 patients that did not develop NEC 76 survived and 16 died. The difference was again statistically significant (p<0.001).

Among 73 patients who were sepsis free 64 survived and 9 died, while as among 27 patients having sepsis 10 survived and 17 died. This difference was statistically significant (P<0.001).

Also there was a statistically significant difference in Crib score between neonates (Table 2) who died and those neonates who survived (P Value-0.001).

Kaplan Meier survival curves till discharge were made for independent predictors of mortality. Survival analysis showed a statistical significant difference in survival between LBW neonates, who had risk factors under study (Sepsis, mechanical ventilation, NEC and low birth weight) with those who did not have these risk factors (Figures 1-4). 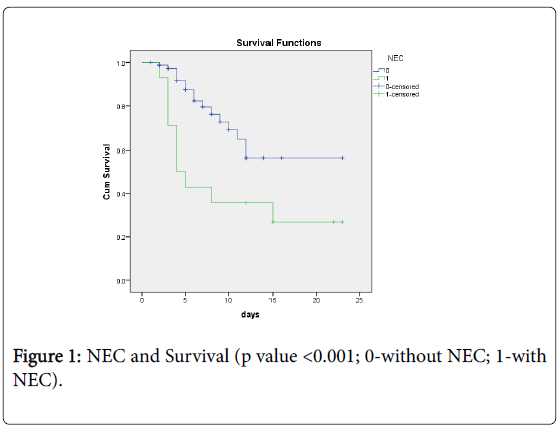 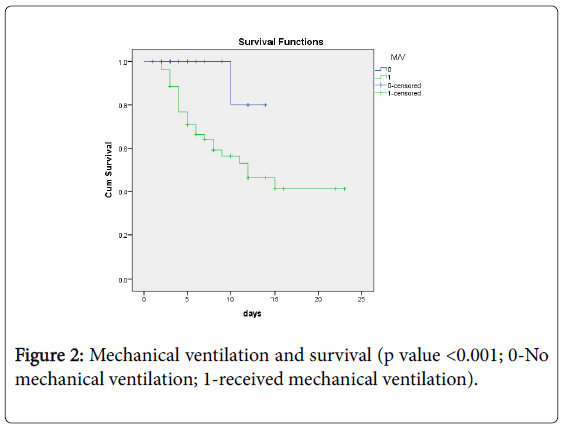 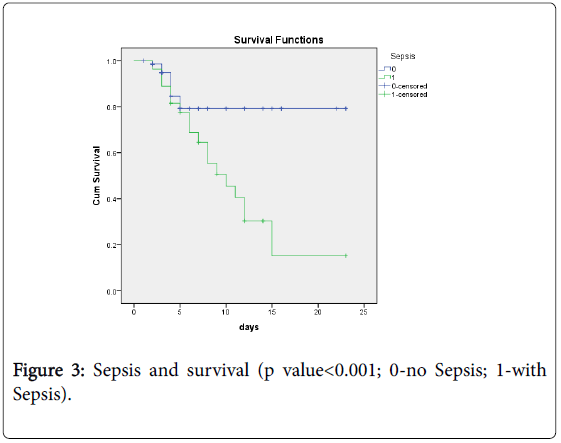 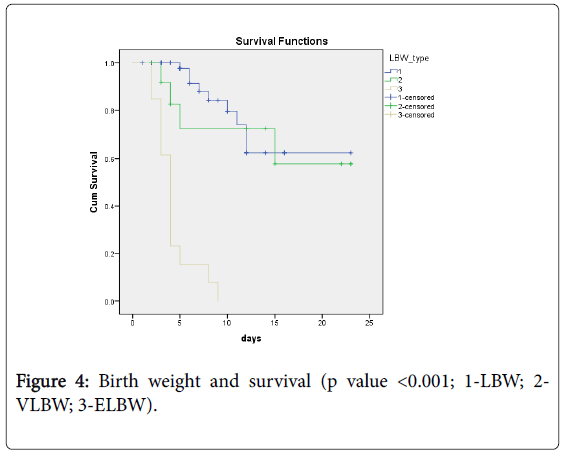 LBW contributes significantly to neonatal mortality in our country. While as incidence of LBW as well as mortality among LBW neonates have significantly come down in developed countries, these variables are still high in developing countries.

The difference between mortality among LBW, VLBW and ELBW neonates was found to be statistically significant as was found in a number of other studies conducted by Gera, et al., Basu, et al., Terzic, et al., Dong, et al., Mukhyopadhyay, et al. [7-11]. This observation is consistent with our clinical understanding that survival decreases as birth weight decreases. In our study there were 13 ELBW neonates and mortality was 100% in this group. However most of neonates [12] in this group consisted of those with extreme prematurity with severe RDS. Neonates with extreme prematurity pose a significant challenge with respect to survival. They need intensive care and treatment of associated complications in high dependency units with provision of facilities like high frequency ventilation, NO and ECMO. However our NICU was lacking these facilities as is the case with most level III NICUs in our country.

Necrotising enterocolitis was one more variable that was studied as a risk factor for neonatal mortality and it was found that there is a statistically significant difference in mortality between those neonates who had NEC and those who did not. A total of 14 neonates developed NEC, out of which 10 died and 4 survived. All of the 4 neonates who survived were term neonates with LBW and had stage I of NEC. Rest of the neonates with NEC was premature and progressed to advanced stages of NEC.

Our study found that CRIB score was a significant predictor of mortality risk. It is an easy to use clinical score to assess the risk of severity of illness in LBW babies as it consists of variables that are part of initial assessment of a sick neonate. In our study the median CRIB score for survived group was 2 and median CRIB score for expired group was 10. The difference was statistically significant. Terzic, et al. [9] and Brito, et al. [5] also had similar results while assessing mortality in very low birth weight babies. However our study studied usefulness of CRIB score in all admitted LBW babies.