Comparison between the Singular Action and the Synergistic Action of Therapeutic Resources in the Treatment of Knee Osteoarthrosis in Women: A Blind and Randomized Study

Osteoarthritis is a degenerative joint disease that promotes chronic and joint decrease, which is prevalent in the elderly. There are several therapeutic approaches for the treatment of pain, including therapeutic ultrasound and laser therapy, therapeutic resources are not included in the treatment of this disease. The aim of this study was to distinguish between a single application of the laser therapy/therapeutic ultrasound resources in relation to the effect of the synergistic applications of the same resources in patients with knee osteoarthrosis. Thirty patients were selected, being 10 patients per group, randomly distributed. In addition, patients did not have access to the form of a course, characterizing a blind study. Patients were assessed by Western Ontario and McMaster University Osteoarthritis Index (WOMAC) for osteoarthritis of the knee. All patients completed the Visual Analogue Scale. Analogue scale, fossil of greater abnormality, larger or smaller wall, conjugated according to natural resources. A greater percentage difference was observed in the comparison between laser versus ultralaser (50%) and therapeutic ultrasound versus ultralaser (130%), when compared to functionality (WOMAC). When comparing the Visual Analogue Scale, a greater reduction of pain was observed by the combined use of resources in relation to the resources singularly, for both the right and left knees. The results showed that synergic therapy was more efficient in the treatment of knee osteoarthrosis in relation to the use of the therapies alone, in relation to both joint function and pain. The use of new technologies provides a new treatment approach, without the use of drugs and non-invasively, allowing a better quality of life of patients with this chronic and degenerative pathology.

Osteoarthritis is an irreversible degenerative joint disease, which leads to pain and loss of joint function. It can be defined as a condition characterized by focal areas of loss of articular cartilage in the synovial joints and affects about 20% of the world population. Between the age group of 40 to 60 years a linear increase of the degeneration happens, and with the increasing life expectancy, will result in an increase of osteoarthrosis; worldwide estimates of diseases show that by 2030 the prevalence for symptomatic osteoarthritis is 30%. The knee joint is among the three most commonly affected joints, along with hand and hip joints, being more common in females [1,2].

Treatments for osteoarthritis include pharmacological therapies such as analgesics and anti-inflammatories, as well as nonpharmacological therapies such as stretching and muscle strengthening, improving physical fitness and reducing pain, thereby increasing quality of life. They also include as conventional treatments the use of laser therapy and therapeutic ultrasound for the purpose of reducing pain due to its analgesic and anti-inflammatory effect [1-3].

In recent studies carried out by the research group of the Institute of Physics of São Carlos, University of São Paulo, it was observed that the prototype of the device that simultaneously emits ultrasonic waves and laser of low intensity, allows the potentialization of the effects of produced cavitation by the therapeutic ultrasound, as well as the enzymatic and mitochondrial modulation produced by the low power laser, obtaining a greater anti-inflammatory effect, analgesic of both resources and thus allowing the stabilization of cartilage degeneration, improving the quality of life of the patient [3-5].

The purpose of the study was to evaluate the differences in the different treatments of laser therapy, therapeutic ultrasound and ultralaser (therapeutic ultrasound conjugated to laser therapy) in patients with osteoarthritis of the knee, evaluated by the functionality by Western Ontario and McMaster Universities Osteoarthritis Index (WOMAC) and pain level by Visual Analogue Scale (VAS).

It was used a prototype of laser and ultrasound, where the device had a project and support carried out by the Laboratory of Technological Support of the Institute of Physics of São Carlos, University of São Paulo. This prototype allows the emission of laser and ultrasound simultaneously, conditioning the overlap of both fields, ultrasonic and luminous, and contributing to the synergistic therapeutic effect.

For the study, 30 female patients, average age of 45 years old (45 ± 4.5) and diagnosed with osteoarthrosis of both knees, were selected. As exclusion factors for the project were considered pre-existence of other degenerative, autoimmune diseases and fibromyalgia. Infiltration treatment was also considered as exclusion factors in a period of three months prior to the beginning of the project. Patients were assessed using the Western Ontario and McMaster Universities Osteoarthritis Index (WOMAC) Questionnaire for knee osteoarthritis. All patients were evaluated before and after each session. The Visual Analogue Scale (VAS) was used as a way of measuring the level of pain.

To characterize the blind study, the patients were not informed about their intervention group.

Statistical analysis was performed using Instat 3.0 software for Windows 7 (Graph Pad, USA, 1998). All data were expressed as mean and standard deviation. The level of significance was set at p<0.05. The Kolmogorov-Smirnov test was used to analyze the normality of the data. Subsequently, a one-way ANOVA with a post-test was performed, using Student-Newman-Keuls for parametric data in comparison between protocols and post-hoc-Tukey-Kramer for comparison between therapeutic resources. 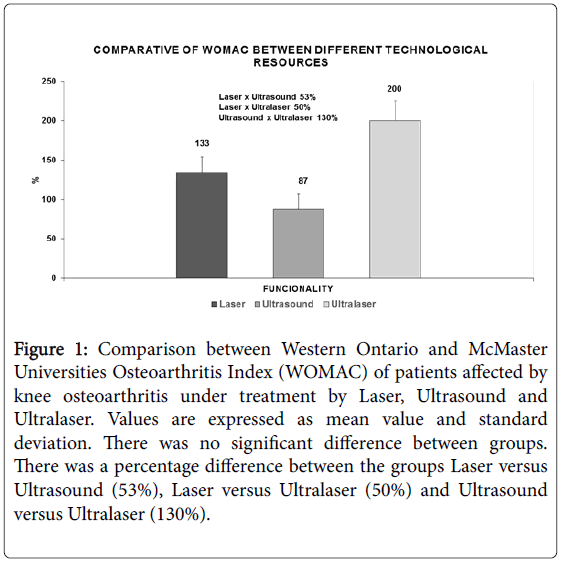 Table 1 shows the visual analogue pain scale observed in initial and final evaluations, in the right and left knees. It was observed that the actions of both technologies were efficient for the reduction of patients' pain, according to the analogous visual scale, indicating a significant difference. However, the observed action of the ultralaser (p<0.001) was better than the action observed by the laser action (p<0.006) and the ultrasound (p<0.006) in relation to the right knee in the comparison between initial and final values.

Likewise, the action of the therapeutic resources on the patients' left knee was more efficient in the ultralaser group (p<0.003) than in the laser (p<0.05) and ultrasound (p<0.04) groups. Representative table of initial and final pain values visual analogue scale

Osteoarthrosis of the knee is an inflammatory and degenerative disease that results in the destruction of the articular cartilage and may lead to a deformity of the joint. The etiology of the degenerative process is complex, it begins with aging, however during life several factors that can cause natural degeneration may arise, as well as inflammatory, infectious diseases, and traumas that degenerate the cartilage. The structure of cartilage and the inflammatory aspects of the degenerative process have been studied and recent advances have shown that the resolution of knee osteoarthrosis could be by therapeutic resources and by surgical procedures [1,6].

Among the therapeutic technologies is the ultrasound. This technology is a mechanical waveform that, when used in the pulsed mode, provides several therapeutic effects, such as analgesia, stimulation of the anti-inflammatory response, chondrocyte proliferation and cartilage growth, as well as increasing vascularization and collagen synthesis leading tissue repair. Still as therapeutic technology is the low intensity laser. Photobiomodulation is characterized by electromagnetic waves that induce the occurrence of modulatory and stimulating actions, contributing to increased blood flow, reduction of edema and increased supply of tissue oxygen, resulting in pain relief and tissue regeneration [6,7] . Previous studies conducted by this research group show that the synergistic application of ultrasound and laser offers the potential of these benefits, thus showing a new therapeutic approach for osteoarthrosis, significantly improving patients' quality of life [8,5].

In theory, the synergistic effect of ultrasound and low-intensity laser was evidenced as the best approach for analgesic and antiinflammatory modulation in relation to the use of individual therapy. The stimulation of cartilage growth and the proliferation of chondrocytes that occurs by the mechanical effect of ultrasound, causes analgesia and anti-inflammatory action, with no significant heat production. The extensibility of collagen tendons, ligaments and contracture of the joint capsule and connective tissue are structural effects that can occur [3].

Ultrasonic waves in pulsed mode produce longitudinal vibration that result in negative pressure on the cells, causing cellular and biomolecular changes bringing as a benefit increased cellular metabolism and greater fluidity of blood in the blood vessels. Consequently, there is an increase in temperature and supply of cellular oxygenation. The additional heating may convert to electrical and mechanical energies inside the cells, adding the molecular movement. The physical effects promote the permeability of the cell, ion exchange through the cell membrane and the synthesis of proteins resulting in increased tissue repair. Such alterations contribute to the analgesic action regulating the thermodynamic mechanism related to mechanoreceptors and pain [3].

The effect of photo-biomodulation stimulates the proliferation of chondrocytes promoting cell regeneration and the extracellular matrix performs synthesis and secretion, favoring increased blood flow, decreasing edema and improving tissue oxygenation, aiding in physiological mechanisms that depend on photochemical actions at the cellular level, increasing the release of neurotransmitters such as serotonin that are involved in pain modulation [3].

In this way, the present study showed the efficiency of the synergic performance of the ultrasound and low intensity laser therapeutic resources, increasing the joint function and consequently reducing pain. The sum of these factors enabled not only numerically but also visually the improvement of the patient's quality of life.

Based on the evidences found in the present study, it is explicit that the use of therapeutical ultrasound and laser therapy resources, when applied in a conjugated way significantly potentiates the effects when compared to the use of the individual therapy, greatly reducing the inflammatory picture and pain relief, increasing mobility and functionality, providing a significant increase in quality of life.

Copyright: © 2019 de Souza Simão ML, et al. This is an open-access article distributed under the terms of the Creative Commons Attribution License, which permits unrestricted use, distribution, and reproduction in any medium, provided the original author and source are credited.