System thinking is not new in engineering, ecology and environmental science. A system can be defined as a group of interacting, interdependent parts linked together by exchanges of energy, matter, water and information, and subject to a common plan or purpose. Interestingly, cities at the systems level are not yet well understood [1], in which approaches to analyzing performance in cities such as energy, material and water processes andits connection to urban design are largely unexplored.

A building would easily incorporate more than dozens or hundreds of products. Other than the size or scale matter, a building system also contains property that is unlike industrial products. It holdsa comparatively long life and constant changes over time. The built environment is normally multi-functional, unique and contextual that causes local impact [2]. The site conditions supporting the operation of a building are complex matters. There is no single building that can operate in exactly the same site conditions because of their differences in location. The combination of complex environmental requirements of microclimate, topography and user behavioral patterns on site would jointly influence the performance of a building. A building system cannot be replicated in the same way as industrial products in LCA process.

It is even more so when a LCA for a building system is extended to the level of an urban district of a city. An urban environment normally integrates buildings, infrastructures and other landscape features. The system boundary is hard to define. The problem of complexity is challenging at the level when the system boundary goes beyond a building and engage other buildings, infrastructures and surrounding natural environment. To conducting LCA for an urban system, there is a need to go beyond the product-based approach anduse the system approachto tracking energyand material flows across several spatial scales and system boundaries.

How does the issue of complexity be managed by the professionals of architectural engineering and technology, especially when the scope of research is extended from the level of architecture to the broader scale of city and region? As urban ecologists argued, the complexity emerges as interacting agents engage in behaviors in systems that are non-linear or open [3]. The aggregation of properties of individual buildings does not make up the sum or a total performance of a neighborhood, city and region, in which the system boundary is far more complex than a building system.

What would be the strategy of research for the question of complexity in urban systems? As the complexity phenomena that can also be observed in natural system, can we learn from other disciplines such as ecosystem theory on this subject? Ecologists Walker et al introduced a proposition panarchy for describing the cross-scale effect of ecosystem [4]. Like ecosystems, different mechanisms may govern interactions across different scales within cities, to confer resilience and adaptability [5]. System ecologists suggested a concept stability landscape as a metaphor for describing the problem of complexity and its resiliency in an ecosystem. To design and manage for a complex and resilient system, we have to look after the attribute latitude, the maximum range a system can be changed before losing its ability to recover, the attribute resistance, the ease or difficulty to make the system change, and the attribute precarious range, how close the system is to the threshold. The final key attribute panarchy describes the structure of the entire multi-scale system, in which the patterns of energy and material flows in one scale are influenced by the patterns at the scales above and below [4,6].

The panarchy proposition in cross-scale interaction addresses the concept of system resilience, the capacity of a system to absorb disturbances and impacts from flows operating at scales above and below and its ability to reorganize itself. Some landscape ecologists have already applied the cross-scale concept to understanding the scale dynamics in species biodiversity by using the level of landscape as the focal scale to connect a finer-scale green patch and a broader-scale region [7]. As an analogy, can the land use change be seen as a focal-scale for planning intervention to provide a framework for accommodating the finer-scale site design, and perhaps, to create an effective impact to the much broader-scale patterns of climate change (Figure 1). 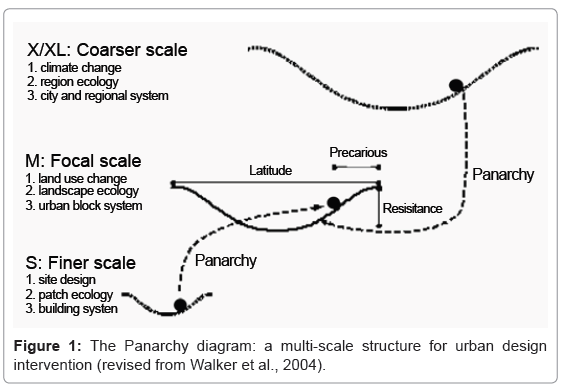 One of the observable examples of cross-scale dynamics in cities is the urban hydrology: The water table change in the drain of any backyard is caused by a precipitation event in the upstream of a watershed in a much broader spatial scale, in which the patterns of precipitation might be induced by extreme weather caused by the climate change. The small-scale land development would produce disturbance and impact to the hydrological regime at a broad-scale region, and may also create tremendous repercussion on an entire hydrological system of the watershed.

What about energy? How does the complexity problem be managed in the research of energy performance, material flows and life cycle assessment when we move up the scale from building to urban systems? What is the scale dynamics and the cross-scale relationship? Like water, we need to figure out how energy flows through infrastructural systems across scales from building, block, neighborhood, city and region. Based on the panarchy theory, is there a focal scale that can be used for bridging scale below and above? For example, is the energy performance measure of an urban block system an effective spatial scale, say the focal scale, for linking our understanding of the energy performance at the finer-scale building and the broader-scale urban energy systems? It is still unclear how local finer-scale patterns of energy flows in building would aggregate to create a larger-scale impact to pattern of energy performance at the coarser-scaleof an entire city. In fact, the formation of intensity of urban heat island effect is a much more complex phenomenon jointly controlled by factors including climate, topography, land cover and urban space structure [3].

A high performance city design contains the question of extreme complexity that needs a research strategy. The panarchy proposition might provide a way out.Facing complexity problem in the couple urban and natural systems like this, an urban ecosystem, it should not be understood at one scaleonly. If it is hard to measure complexity of the entire urban system, the strategy of research design is maybe to identify the focal scale that is manageable in analysis, and then to explore its relationship to the scales from above and below and their interactions and dynamics.

To answer these questions, more empirical research and modeling in cross-scale urban systems are needed in the areas of energy performance, material flow analysis and life cycle assessment. It relies on cross-disciplinary research in architectural engineering, building technology, urban design, city planning and environmental science and technology. It is a maybe one of the promising research areas that the Journal of Architectural Engineering and Technology should go in near future.

Copyright: ©2012 Yang PPJ. This is an open-access article distributed under the terms of the Creative Commons Attribution License, which permits unrestricted use, distribution, and reproduction in any medium, provided the original author and source are credited.