The present studied was carried out in four districts of Garhwal Himalaya. Survey and sampling of vegetation were completed used standard ecological method with aim to study of plant composition, population structure and regeneration at different site in the four districts viz. Pauri, Rudrapryag, Tehri and Chamoli of Garhwal Himalaya. Each district represents two sites, falls an altitude in Pauri (1850-2070 m), Rudrapryag (1775-2147 m), Tehri (1938–2459 m) and Chamoli (1711–1960 m). Among the altitudes over all range is (1711-2459 m) altitudes in all eight sites, total 16 tree species has been recorded. Total tree density varies from 670-1510 Ind ha-1, total seedling density from 220-1540 Ind ha-1 and total sapling density 165-1300 Ind ha-1 was recorded in all sites among the attitudes. Species diversity (H-) was observed between 0.12-0.19 for trees, 0.04-0.40 for seedling and 0.07-0.15 for sapling in all sites among the attitudes.

The composition of the species like trees, shrubs, herbs and climbers are indicating present status of the forest biodiversity. Composition of the forest is diverse and different from place to place because of different land form of the sector have different climate, soil and topography and supports tropical, sub-tropical, temperate and alpine and in certain areas even arid or semi-arid vegetation. Any species regenerate in any area or habitat plant diversity and regeneration status of various forest communities is base line study for management and conservation plant diversity. The population structure like seedling, sapling and adult trees on the basis of age and diameter in any forest stand or patch and forest area to determine regeneration status of forest area [1-11]. If seedling and sapling number less are as compare to adult incase consider poor regeneration [12-16]. The regeneration study has most important study to indicate future of forest as well as implication for the natural forest management which will forest, or species survives and dominant in these areas [1]. The distribution pattern is most important of species in which form grown up species in the forest areas an understanding of the distribution of tree species, seedlings, saplings, shrubs and herbs and their assemblages must play an important role in elucidating the larger patterns of distribution of biodiversity in forest areas [17-20].

Rhododendron is a large genus with many of its 1000 species in the world and covered highland area like Nepal, India, China and Malasiya [21-26]. Recent study showed that 06 species of Rhododendron was reported in Uttrakhand, Western Himalaya such as R. arboreum, R. anthopogon [3], R. campanulatum [27], R. barbatum [8], R. lepidotum [5] and R. nivale Hooker [7] or R. rawatii is new species reported by Rai and Adhikari [18]. It is belong from Ericaceae family has many superior characteristics for its wide acceptance as fuel, timber, fodder and flower for preparation of very common and pleasant drink (highly medicinal) juice and squash throughout the Himalaya. Among these species, many are dominant tree/shrub species of Garhwal and Kumaun Himalaya [14]. The broad-leaved forests in the Himalaya Rhoodendron are considered to the next of Quercus , to provide the most effective for soil and water conservation. Owing to multifarious nature of this genus most of the species are over exploited for various purposes [21]. Among these species Rhododendron arboreum is one of the most exploited species. Major area under Rhododendron arboreum forest is surrounding by local inhabitants of hilly areas in Garhwal Himalaya, therefore, present status of population and regeneration of forest are not available. Keeping in view the afore mentioned facts, this paper deals to investigate the variation of community composition, tree diversity, population structure and regeneration in six Rhododendron arboreum forest stands of Garhwal Himalaya.

The study was conducted in Garhwal region (Western Himalaya) from 2014 to 2016 in potential site of three districts. After reconnaissance survey was carried out for initial few months, finally based on the presence of Rhododendron arboreum species eight sites were selected for detailed study. Systematic data collection was carried out in eight sites with different altitudes: Ghimtoli (1950–2147 m), Kharpatya (1775–1934 m) in Ruraprayag district; Khirsu (1850–1969 m), Pharakhal (1858–2070 m) in Pauri District; Ranichauri 1938–2023 m), Jadipani (2292–2459 m) in Tehri district and Nauti (1750–1900 m), Nadasain (1711–1960 m) in Chamoli district for phytosociological studies of Rhododendron arboreum forest and other associated species (Figure 1). Systematic sampling was carried out in selective patches in each site two sample plot 1000 m2 or 0.1ha size in each site were randomly identified, and ten 10 × 10 m or 0.01 ha size quadrats were placed random on each plot. 10% of the total area was selected for sampling and at least 0.1% of this was used for complete enumeration. Population structure of all the woody species occurring in each site was studied using quadrate method. Density, frequency and different life stages of the species were determined from the sampled area. Individual tree of Rhododendron arboreum within quadrate were marked with paint to determine the quadrate boundaries. Tree species in each sample plot or quadrate were recorded and CBH (circumference at breast height, 1.37 m from the ground level) measured. Individuals were categorized as trees (>31 cm CBH), sapling (11-30 cm CBH) and seedlings (2 m for trees, 252 m for shrubs and 12 m for herb.

Stratified sampling technique was conducted in natural growing areas and planted areas of Rhododendron arboreum forest. Study area was divided based on presence of the species. A standard size sample plot or quadrate (10 × 10=100 m2 for tree, 5 × 5=25 m2 for shrub, seedling and sapling and 1 × 1=1 m2 for herb) was used in each site for data collection.

Species diversity H-was computed by the Shannon and Weiner [23] information index as follows: 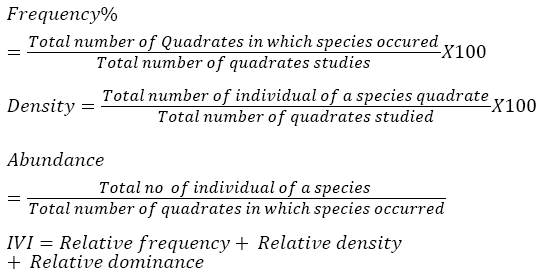 Statistically have been applied one-way ANOVA and correlation by SPSS software.

Physical characteristic of study sites was given in Table 1. There were total 08 sites reported inventory. These sites fall between 30°24’25” N and 30027’66” N latitude 79°18’66” E and 78°33’56” E longitude and covered altitudinal range between 1711 -2459 masl. Among the sites four sites represent each open/easy and open/moderate respectively equally access to resources. A total of 16 species were recorded across the study sites. Total tree density maximum (1510 N ha-1) was recorded at Pharakhal and minimum (670 N ha-1) at Ranichauri. Maximum density observed due to better association and combination of Rhododenron arboreum, Quercus leucotrichophora and Myrica esculenta etc., species saw at Pharakhal site but Ranichauri site Pinus roxburghii is co-dominant with association of Rhododenron arboreum species is not support to other species, therefore minimum density was recorded. Density of Rhododendron arboreum ranged between 670 N ha-1 (Ranichauri) to 930 N ha-1 (Pharakhal), Relative dominance ranged between 0.74 (Kharpatya) to 77.38 (Khirsu) and IVI ranged between 4.20 (Kharpatya) to 220.50 (Khirsu). Rhododendron arboreum, Quercus leocotrichophora and Myrica esculenta mixed forest was observed dominated species having good association of the species across sites. Similar study was conducted by Rawat and Chandhok [19] R. arboreum density (80 N ha-1) and IVI (29.99) was observed at Govind Pashu Vihar Wildlife Sanctuaries in Uttarakashi district [10]. R. arboreum density (1.23 N ha-1) and IVI (28.69) was observed at J&K, Western Himalaya.

Tree, sapling, seedling diversity (H-index) on site wise was given in Table 6. The diversity (H') value of trees was calculated highest (0.19) at Khirsu followed by (0.15) at Ghimtoli site, because species dominances are less as compared to other sites to indicate higher diversity in these sites. Higher diversity is also due to moderate resources availability at higher altitude and not to easy accessible areas and fewer disturbances in the sites tends to increase diversity [17,24]. Our observations are conformity with these results. The sapling diversity value was recorded maximum (0.15) at Khirsu and seedling diversity value was observed highest (0.40) at Ghimtoli as compared to other sites. It may be good site there is younger stand which is supported to seedling and sapling.

The study provides compositional, population structural and regeneration status or phytosociology of Rhododendron arboreum at eight sites in four districts of Garhwal Himalaya. In all-natural forest stands the associated or companion of dominant species can also have played important role for the establishment and sustainability of particular species. The broad-leaved character of Quercus leucotrichophora major associates Rhododendron arboreum have been reported to capable conserve the water moisture at large amount in hill area and also beneficial in erosion control. The study concludes as these species may also be a part of research for their regeneration, establishment and sustenance at same preference of Quercus leucotrichophora. Rhododendron arboreum are extracted from edible product and small but considerable scale therefore may be investigated for their conservation point of view. The flower of Rhododendron arboreum is medicinally important at local and regional level peoples are extracted for making of Juice and Squesh from its flower to serve the upliftment of local economy and livelihood. Lower density, IVI value and regeneration areas indicate for their attention toward future research overcome the upcoming problems. Negligence of the species may be affect the future composition, diversity and regeneration of the existing oak forest mixed stand therefore conservation approach for Rhododendron arboreum must be needed as research front in the Gahwal Himalayan region.

The authors are thankful to Indian Council of Forestry Research and Education (ICFRE), Dehradun for providing financial assistance under the project entitled "Networking Project on NTFP in Uttarakhand".

Copyright: ©2017 Chauhan DS, et al. This is an open-access article distributed under the terms of the Creative Commons Attribution License, which permitsunrestricted use, distribution, and reproduction in any medium, provided the original author and source are credited.