Copyright: © 2016 Adinma JIB, et al. This is an open-access article distributed under the terms of the Creative Commons Attribution License, which permits unrestricted use, distribution, and reproduction in any medium, provided the original author and source are credited.

Objective: To examines the prevalence and pattern of condom-use among Nigerian university undergraduates.

Conclusion: Awareness of condom among the respondents was high, but usage was low. Religion constitute a major inhibitor to condom-use. Re-invigorating sexual and reproductive health enlightenment including condom-use, employing various media platforms is recommended.

Sexual activity among adolescent and young adult is not uncommon and has been reported to be quite high among students in tertiary institutions in Nigeria [1]. HIV/AIDS and other sexually transmitted infections have remained a source of concern globally, especially to healthcare groups and organizations. There is high prevalence of sexually transmitted infections among the adolescents and young adults in Africa, mainly as a result of high risk behaviour and neglect of established preventive measures. Approximately 3.3 million young people are living with HIV/AIDS in sub Saharan Africa, and 76% of those affected in this group are women [2]. Africa accounted for higher than two thirds of people living with HIV/AIDS worldwide and 72% of new infections among adults and children. Africa also, contributed about 71% of the world’s AIDS-related deaths in 2011. Most transmission in Africa occurs in heterosexual relationships [3]. Nigeria is the most populous country in Africa and has the second highest number of people living with HIV/AIDS [4]. The current trend of HIV/AIDS and other sexually transmitted diseases (STDs) still shows a high prevalence in Nigeria despite concerted efforts towards its eradication.

Globally, an estimated 210 million women become pregnant each year, of which 80 million are unintended. In addition about 44 million women have induced abortions, of which 22 million are unsafe. Deaths from unsafe abortion account for 13% of maternal deaths worldwide [5-7]. Of the 4 million abortions that occur in Africa annually, Nigeria accounts for about 760,000 cases [8]. It is estimated that there are about 25 abortions per 1000 women aged 15-44 years [7]. Unsafe abortion causes over 36000 deaths annually in Nigeria, accounting for 30-40% of maternal deaths [9].

The need for consistent and correct use of condom, particularly among young adults, is increasing due to the rapid spread of the HIV. Also, condom is a veritable instrument in prevention of unwanted pregnancy and the unpleasant sequelae of unsafe abortion and maternal death. Its dual function in prevention of sexually transmitted infections as well as contraception makes it very important, especially for the adolescents and young adults who are at high risk of STIs and unwanted pregnancy. The undergraduate students of higher institutions mostly fall into this age category.

Studies on condom use in university populations are few, despite the vulnerability of students to unsafe sexual practices. Previous studies have shown a low prevalence of consistent condom use among undergraduate students [10]. This study is therefore necessary, as it reveals the prevailing trend in condom use in this category of people and the findings from this study will help in planning group specific healthcare and reproductive health programs and interventions aimed at instituting appropriate reproductive health behaviour and practices in adolescent and young adults.

This is a cross-sectional questionnaire based study of undergraduate students of the Nnamdi Azikiwe University, Anambra state, drawn from the two campuses – College of Health Sciences, Nnewi and the main campus at Awka. The Respondents were selected from the faculties of the two campuses using simple random sampling method. Oral consent was obtained from them following due explanation of the study. Only students that gave consents were recruited. The questionnaire schedule elicited information on the bio-social characteristics of respondents – age, sex, marital status, and religion; their awareness and use of condom; reasons for non-use of condom by those not using condom; indication for condom use; awareness of functions of condom; knowledge of the pitfalls of condom; and their source of information on condom. All together three hundred questionnaires were distributed but 276 were found usable after editing and coding. Data obtained was analysed using SPSS version 17.0. Statistical relationships between variables were calculated using the Chi-square test and a p-value of <0.05 at 95% confidence interval was considered significant for all statistical comparison.

Table 2: Distribution by awareness and use of condom N=276. 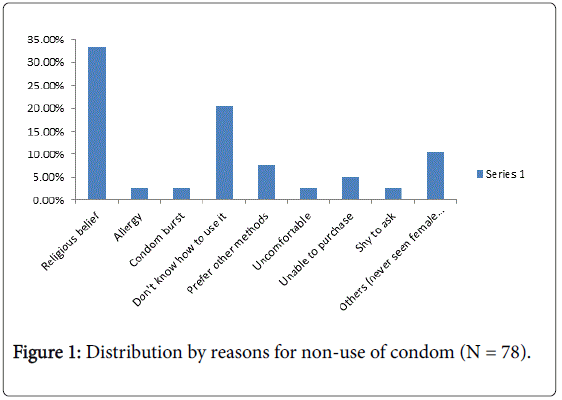 Figure 2: Distribution by consistency to condom use. Figure 3: Distribution by indication for condom use (response to question, when do you use condom) (N = 190).

Table 3: Distribution by awareness of functions of condom (n=276).

Table 4: Distribution by knowledge of pitfalls of condom (n=276). Figure 4: Distribution by source of information on condom use (n=276) bar chart.

Only 80 (42.1%) of those who had ever used condoms were consistent in its use. This is quiet low and undesirable, considered from the point of view of the untoward consequences of unprotected sexual intercourse which includes mainly unwanted pregnancy and sexually transmitted infections together with their various short and long term complications. A similar pattern of inconsistent condom-use has been reported from various Nigeria studies. Ibe and Ibe [12] in a study conducted among undergraduates student at Port-Harcourt Nigeria reported that 82.4% had engaged in unprotected sex and that 29.6% never use condom during sex. While Fawole et al. [13] in another study carried out at Ilorin Nigeria reported that only 22.5% of sexually active undergraduate students had consistent use of condoms.

This frightening statistics on inconsistent condom use are not unrelated to the un-compelling reasons given by the respondents for their use of the condom–which in most cases are occasional viz, when afraid of pregnancy or STI (50%); only during sex with a non-regular partner (13%); and when requested by partner (22%)–reasons which still retain the risks of transmission of STIs and HIV, as well as unwanted pregnancy. This state of affair is no doubt not unrelated to the rather low number of respondents that had knowledge of the protective effect of condom use against sexually transmitted infections 54.3% and against unwanted pregnancy 28.3%! The commonest reason for non-use of condoms in this study was religious belief (35.0%). This has also been identified in some Nigerian national reviews as one of the common reasons for non-usage of condoms [14]. Religion has played a very important role albeit contentious in reproductive health matters. This may not be unrelated to the doctrinal identity of some religious denomination. The Catholic Church for instance does not uphold the use of artificial method of contraception including the condom for whatever reasons, on account of the church’s deontological bioethical orientation [15,16]. It is interesting to note that lack of knowledge on how to use a condom was given as a reason for non-use of the condom in 20% highlighting the necessity for adequate and proper sexuality education amongst this highly vulnerable population. The media constitute the highest source of information on condom use among the respondents in this study–31.9%. The media, particularly the social media has in recent times played a leading role as an avenue for the dissemination of reproductive health information amongst youth and adolescent, in contradistinction to what obtained more than twenty years ago where peer group had been reported to be a prominent source of information on reproductive health issues among young people [17-20]. It is desirable therefore that a reproductive health education disseminated through the media should be adequately monitored and vetted to ensure that young people are given reliable and correct information. Peer group however, still constituted an important source of information being the source in as high as 30.4%. Peer group is generally believed to be an unreliable source of information on reproductive health since often times the informants are ill-informed and therefore tend to give inaccurate information. The advent of the social media will no doubt, with time constitute an information verification platform that will begin to render ‘’peer group’’ source less acceptable as reproductive health information source.

The authors are grateful to South East Nigeria (SE-PAC-Net) for sponsoring the conduct of this research.

The authors have no conflict of interest.