Contribution of an Ultrasound Tissue Characterization on Fetal and Neonatal Health

The clinical tissue characterization was the gray level histogram width divided by full gray level length (Figure 1) [2,3] and it was called gray level histogram width (GLHW) which was standardized by the study of RMI 412 ultrasound phantom (Radiation Measurement Inc. Middleton, Wisconsin). The phantom histogram width did not change when the B-mode device gain changed, while image contrast had to be lowest, because histogram width was enlarged when the image contrast was high. The GLHW of RMI 412 phantom was standardized, and confirmed in various Aloka machines (Aloka, Tokyo) and Voluson 530D (GE Healthwear). The GLHW was manually calculated, and also automatically calculated by “%W” index in the histogram of Aloka Bmode devices, where the value was the same as manual determination [3].

GLHW of 1 cm2 region of interest (ROI) of placental image was manually determined in every 2 gestational weeks in 20 to 41 weeks of normal pregnancies, where mean ± 1.5 SD of GLHW were determined. The GLHW was larger in grade 3 placenta than normal placenta [3] (Figure 1). 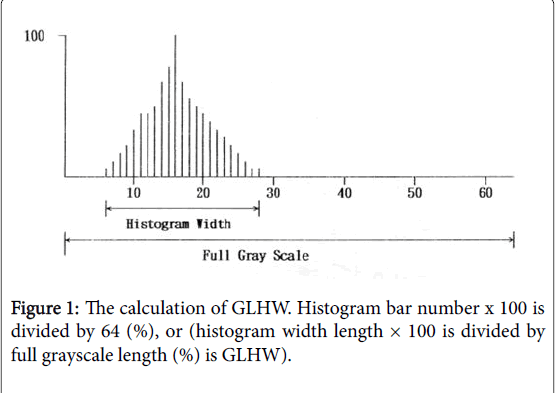 Placental GLHW of a case of IUGR (fetal growth restriction, FGR) was larger than that of normal placenta and diagnosed by Utsu to be intervillous space fibrin deposit (Figure 2) in a pregnant woman of positive cardiolipin antigen, and daily 5000 unit heparin was administered repeatedly to the woman. The GLHW decreased, estimated fetal weight increased to normal, and normal neonate was obtained (Figure 3), despite an FGR fetus died in previous pregnancy of the mother in the present study [3]. 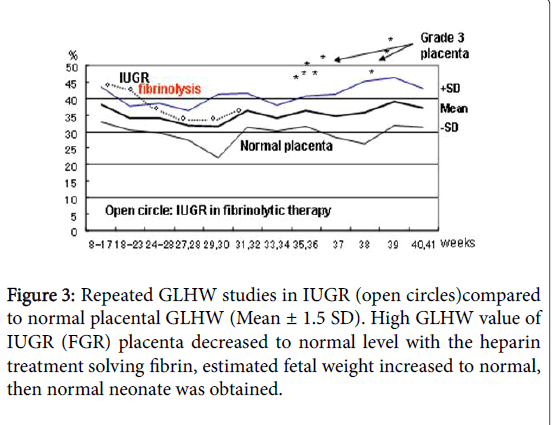 Yamamoto et al. [4] studied fetal brain in preterm pregnancy detecting periventricular echo density (PVE) (Figure 4), of which 18% (corresponding 0.2% of all births) preceded neonatal periventricular leukomalacia (PVL) followed by cerebral palsy (CP), if the PVE lasted until preterm birth, while there was no neonatal PVL when the PVE disappeared before birth. Also, no PVE developed in full-term births’ neonates. The GLHW of fetal brain PVE was 36 ± 5% which was significantly larger than 23 ± 5% of normal fetal brain GLHW [4], thus, GLHW is useful to detect fetal and neonatal brain PVE for the prevention of neonatal PVL and CP, namely, the PVE ultrasonically detected immediately after a preterm birth will be treated with various medicines, e.g. growth factor, erythropoietin, hydrocortisone, in the future. Figure 4:A case of fetal brain PVE, which persisted until preterm birth then changed to PVL followed by CP.

Fetal lung maturity should be detected prior to preterm birth to treat the neonate with artificial surfactant to prevent respiratory distress syndrome (RDS). Since the amniocentesis to chemically analyze amniotic fluid for the detection of fetal lung immaturity is invasive at present, non-invasive ultrasonic tissue characterization of immature fetal lung has been studied by Serizawa [5-7].

GLHW values of fetal lung declined in immature fetal lung, while fetal liiver GLHW was constant, the ratio of fetal lung GLHW and fetal liver GLHW was studied and fetal lung was immature in young fetus, therefore, the gestational weeks multiplied by the ratio of fetal lung to liver ratio was less than 29, which was the critical level to differentiate immature from mature fetal lung, namely, 96% of neonatal respiratory distress syndrome (RDS) was predicted when the GLHW ratio of fetal lung to liver ratio multiplied by gestational weeks was lower than 29. The detection rate was highest among various RDS detection parameters. The preterm pregnancy management, e.g. maternal steroid administration will be monitored by repeated non-invasive GLHW studies. Neonatal surfactant therapy is prepared or fetal steroid therapy will be repeated, if the fetal lung is still immature with GLHW study [6].

GLHW in preoperative ovarian masses were compared to postoperative pathology [4], where mean GLHW was 18 ± 10% in benign masses, while it was 51 ± 11% in malignancy, i.e., mean GLHW values were larger in malignant masses than benign tumors (Figure 2) [4], therefore, ovarian malignant neoplasia is diagnosed by GLHW. Ovarian dermoid cyst was intermediate between benign and malignant masses; however, a dermoid cyst is diagnosed by its characteristic niveau image in B-mode. 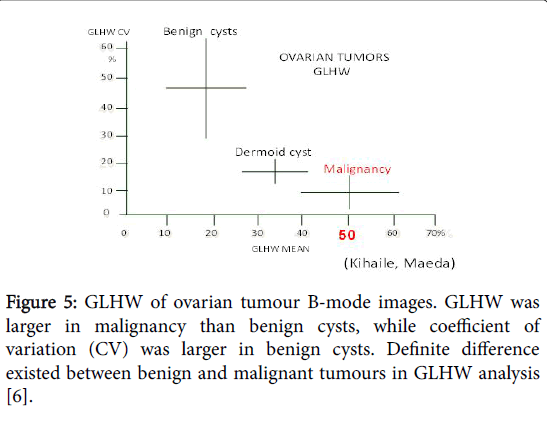 Figure 5:GLHW of ovarian tumour B-mode images. GLHW was larger in malignancy than benign cysts, while coefficient of variation (CV) was larger in benign cysts. Definite difference existed between benign and malignant tumours in GLHW analysis [6].

Mean GLHW of 33 healthy adult livers was 34.8 ± 3.7%, where the coefficient of variation was 10.5% and no relation of GLHW was noted to the age or gender [3]. Any pathological state of adult liver will be studied in the future using GLHW.