Copyright: © 2013 Kuiper JWP, et al. This is an open-access article distributed under the terms of the Creative Commons Attribution License, which permits unrestricted use, distribution, and reproduction in any medium, provided the original author and source are credited.

Osteochondrosis Dissecans (OD) is a lesion of articular cartilage and subchondral bone. OD is most common in men between 20 and 30 years and usually involves the knee or the ankle [1]. In children, the condition is rare, and has only scarcely been described [2]. Repetitive trauma or microtrauma can trigger the onset of OD symptoms, but its origin is mainly nontraumatic [1].

Various treatment options have been described for OD [1,3]. Conservative treatment, such as sports restriction or cast immobilization can be successful, but in approximately half of the cases invasive methods are necessary [4]. Most patients are treated with arthroscopic debridement and stimulation of bone marrow, either by microfracturing (under direct arthroscopic sight), anterograde drilling, or retrograde drilling (through the tarsal sinus) [3]. Other methods include osteochondral autograft transfer and implantation of autologous chondrocytes [1,3]. Debridement and bone marrow stimulation is a successful treatment method with a success rate of 85% [3]. Anterograde drilling is less commonly used, with a lower success rate of 63% [3]. Microfracturing and anterograde drilling will damage the cartilage, if still intact.

All these studies describe intra-articular methods. These methods have the advantage that the ankle joint can be thoroughly inspected by the additional arthroscopy and in case of cartilage damage or loose fragments this can be treated instantaneously. On the other hand, arthroscopy requires opening the skin and the joint capsule, and thus risking complications such as nerve damage (3.5-3.7%), complex regional pain syndrome (1.1%) or (superficial or intra-articular) infection (1.1-3.1 %) [12,13].

With advanced imaging techniques, the joint status can be assessed without invasive methods. It also provides new ways to retrogradely reach lesions with accuracy. We describe a patient successfully treated with retrograde, CT guided, drilling of OD of the talar dome, without the use of arthroscopy.

A 9 year old boy attended the outpatient clinic due to a painful left heel during sports without preceding trauma and without locking symptoms. The right foot was not painful. At physical examination, bilateral pes planovalgus was seen. The patient was able to show 20° passive dorsal flexion in the right ankle and 15° in the left ankle. Palpation of the talocrural joint was painful. Further examination revealed no abnormalities. Radiography of the left ankle showed radiolucency in the medial talar dome (Figure 1). With an initial diagnosis of osteochondrosis dissecans, an additional MRI was performed. The MRI showed an OD lesion of 10 by 14 mm on the medial side of the talar dome (Figure 2a and 2b). No signs of cartilage damage or loose bodies were seen. 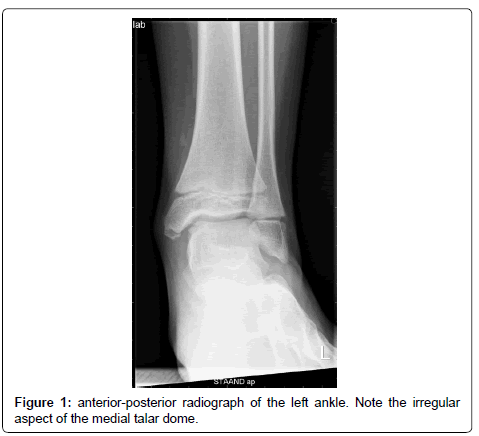 Figure 1: anterior-posterior radiograph of the left ankle. Note the irregular aspect of the medial talar dome. 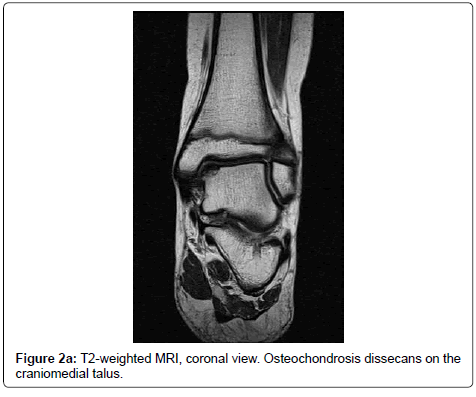 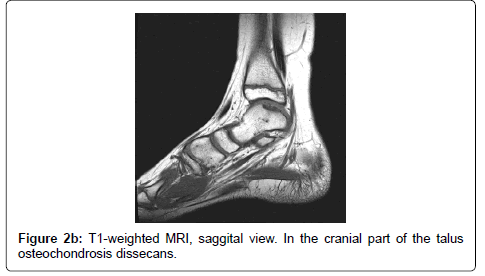 Figure 2b: T1-weighted MRI, saggital view. In the cranial part of the talus osteochondrosis dissecans.

After two months of conservative treatment - avoidance of sports activities without the use of cast immobilisation or anti-inflammatory drugs - the patient returned with progressive pain. Due to the patient’s young age (10 years at that moment), the least invasive treatment was preferred. Arthroscopy was considered less suitable as this would imply opening the joint, and thus tissue damage with concomitant postoperative pain. The orthopaedic surgeon decided to perform CT guided, retrograde drilling of the lesion without additional arthroscopy.

The patient received general anaesthesia, and after sterile washing and draping, the ankle was scanned using CT (Philips MX8000, Philips, Netherlands). The relative position of the lesion to bony landmarks, such as the medial malleolus, was estimated based on MRI images. An incision was made anterolaterally, and a 1.6 mm Kirschner wire (K-wire) was inserted through the tarsal sinus and directed towards the OD lesion. The K-wire position was checked using the CT. After perforation of the lesion until subchondral level, a second and third K-wire were inserted in the same manner (Figure 3). After perforating the OD lesion three times, the K-wires were removed. The incision was closed with one suture, and a pressure bandage was applied. During scanning, the surgeon stepped out of the room. 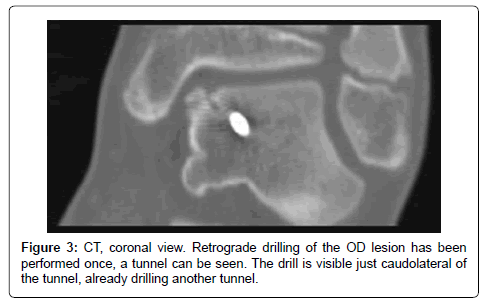 Figure 3: CT, coronal view. Retrograde drilling of the OD lesion has been performed once, a tunnel can be seen. The drill is visible just caudolateral of the tunnel, already drilling another tunnel.

After six weeks of partial (50%) loading of the ankle joint, the patient was advised to increase loading to 100%. Three months after the retrograde drilling, he had recovered well with little pain. After six months, he was able to participate in sports activities again without pain, and the radiograph showed no more signs of the lesion (Figure 4). 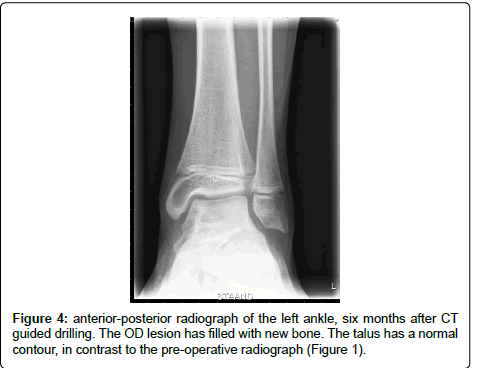 Figure 4: anterior-posterior radiograph of the left ankle, six months after CT guided drilling. The OD lesion has filled with new bone. The talus has a normal contour, in contrast to the pre-operative radiograph (Figure 1).

Osteochondrosis dissecans is most common in male adolescents and young adults, and the talus is the second most affected location after the knee [3]. Patients usually present with pain, swelling and, sometimes, locking symptoms [1]. In most cases, an abnormality can be seen on the radiograph (AP loaded or mortise view and lateral view). For further evaluation, both CT and MRI can be useful in establishing the diagnosis [1,3]. Etiologic factors for (non-traumatic) OD are most likely ischemia and subsequent necrosis of the subchrondal bone, although genetic factors seem to be involved as well [1,14].

Van Bergen et al. [1] describe a guideline for the treatment of osteochondral defects. They advise to try conservative treatment with asymptomatic or small (<15 mm) lesions. An overall success rate of 45% is reported for conservative treatment, including restriction of activities and cast immobilization [4]. Otherwise, debridement (75% success) and drilling (86% success) are the most common options. Massive lesions can require an allograft or even an arthrodesis or total ankle arthroplasty [1].

In the present case, because of the young age of the patient and the small lesion size (<15 mm), conservative treatment was tried first. Because the pain did not decrease, but increased instead, operative treatment was indicated. Because of the patient’s age, the good state of the cartilage and the surgeon’s experience, retrograde CT guided drilling was performed. It can be argued that the patient might have recovered conservatively if the conservative period was prolonged to six months. However, the orthopaedic surgeon and the parents felt the need to act, because the pain was increasing and the social participation was getting worse. Furthermore, they were reluctant to use arthroscopy and possibly damage the intact cartilage and to risk other arthroscopy related complications.

Six months after the drilling procedure, the patient had no relevant symptoms, and radiography showed no signs of the lesion. Therefore, no follow-up appointment was made, but the patient was advised to return if symptoms were to reappear. We believe it is appropriate to continue follow-up until clinical and radiological signs have normalized, which in most patients means a follow-up of one year.

CT guided drilling without the use of arthroscopy has not been described before. It offers advantages over arthroscopic treatment because with this technique the joint is left unharmed and intra-articular complications can be avoided. A disadvantage of CT guided treatment is the higher radiation dose, as compared to arthroscopy or fluoroscopy guided methods. Unfortunately, the studies using fluoroscopy did not report the radiation dose [7,9,10]. The radiation dose of the CT guided drilling procedure as described in this case report is estimated to be around 6 milliSievert. We feel the advantage of avoiding arthroscopy outweighs this disadvantage. MRI guided retrograde drilling might even be a better treatment option, without the radiation drawback, but has inferior bone visualization and is more expensive.

In conclusion, successful treatment of osteochondrosis dissecans of the talus can be achieved with retrograde, CT guided drilling, without the use of arthroscopy. Computer software guided drilling, or use of MRI instead of CT, may be options for the future when they become less expensive and more widely available. For young patients with intact cartilage, we believe CT guided drilling has additional advantage over arthroscopic drilling as it leaves the joint unharmed.