Copyright: © 2015 Piero NM, et al. This is an open-access article distributed under the terms of the Creative Commons Attribution License, which permits unrestricted use, distribution, and reproduction in any medium, provided the original author and source are credited.

Being the fourth most important crop in the developing countries surpassed only by maize, rice and sugarcane as a source of calories, cassava (Manihot esculenta Crantz) is doubtlessly a famine reserve crop due to its drought tolerance, ability to grow on infertile soils and its ability to recover from disease and pest attacks. However, this important tuber crop has a fair share of demerits, among which is the fact that all parts of the plant contain toxic levels of cyanogenic glycosides, which have to be removed by laborious processing before cassava can be safely consumed. Conventional methods for removal of cyanogenic glycosides in cassava have seldom been successful for decades. Genetic engineering holds the key to overcoming majority of these limitations in order to produce cassava plants in which desirable traits are optimized and undesirable traits downregulated. The objective of this study was to determine the levels of cyanogenic compounds in three Kenyan cassava genotypes along with an exotic model cultivar in which cyanogenic glycosides had been downregulated via RNA interference approach in an earlier study by the authors. Cassava roots from transgenic and wild type genotypes were harvested, peeled, cut to pieces and washed three times with cold water, following cyanogenic compounds were extraction by homogenization in acid extraction medium. The supernatant obtained after centrifugation of the homogenate was analyzed for cyanogenic compounds content by spectrophotometric procedures. From this study, transgenic cassava lines with cyanide content three folds less than the cyanide content in the wild type relatives were produced. This confirmed RNAimediated downregulation of expression of cytochrome P450 genes responsible for biosynthesis of cyano-glycosides previously undertaken by the authors in an earlier study.

Cyanide occurs in cassava in the form of two cyanogenic glycosides; linamarin and lotaustralin. Hydrolytic enzymes which are capable of breaking down these cyanogenic glycosides to free cyanide (hydrocyanic acid, HCN) are also present in the plant [1]. However, under normal conditions, they are separated from the substrate. Any process that ruptures the cell walls will bring the enzymes into contact with the glycosides and will thus release free cyanide and reduce the glycosides' content of the final product [1].

Cassava toxicity in humans is a well-documented problem. Cassava tubers vary widely in their cyanogen content, although most varieties contain 15 to 400 mg HCN per kg fresh weight [2]. Cyanide doses of 50 to 100 mg are reportedly lethal to adults [3]. Several diseases are associated with the consumption of inadequately processed cassava roots, such as tropical ataxic neuropathy, endemic goiter and spastic paraparesis (Konzo) [1,4,5]. Konzo is mainly a disease of women and children. It is an acute disease, rapidly and permanently crippling the victim by damaging nerve tracts in the spinal cord that transmit signals for movement, causing a spastic paralysis of both legs [6].

Different methods are available for the quantitative determination of cyanogenic compounds (linamarin, cyanohydrin and free cyanide). The majority require three steps. The first step, extraction of cyanogens, is normally carried out in dilute acid [7] to stop the degradation of cyanogenic compounds. The second step involves degradation of linamarin to cyanohydrin and glucose and, subsequently, to HCN. This can be achieved either by autolysis, which relies on the endogeneous linamarase [8], by enzymatic hydrolysis by adding exogenous linamarase [9] or by alkalinic hydrolysis by addition of NaOH.

For the third step, determination of HCN, various methods have been developed, such as titration with AgNO3 [10], reaction with alkaline picrate [11], and, most widely used, the photometric method based on the König reaction [12-14].

Several other methods are available and have been reviewed by ref. [7]. The method based on the König reaction is suitable for a laboratory with limited equipment and for field analysis, and hence it was chosen for this study.

This study was designed to determine levels of cyanogenic compounds in three transgenic Kenyan cassava lines used in this study along with an exotic model cultivar, TMS 60444. Molecular analysis results of transgenic lines of these genotypes obtained by ref. [15] confirmed stable RNAi-mediated downregulation of cyanoglycosides. It was, therefore, imperative corroborate the obtained molecular data with biochemical assays for the cyanogenic compounds.

Sample preparation: Kanamycin-resistant transgenic cassava lines and the wild type cassava were analyzed for cyanogenic compounds content. Cassava roots were harvested, peeled, cut to pieces and washed three times with cold water. Since cyanide content varies both longitudinally and radially [16,17], a homogeneous sample was obtained by removing both the stem end and the distal end of the tuber and cutting the root into cubes. They were dried at room temperature (25°C) and were then ground to powder. Leaves were also harvested from both transgenic and wild type Cassava washed once with cold water and dried at room temperature after which they were ground to powder. For determination of distribution of total cyanide content in roots, powder from different root parts was prepared separately for separate analysis. The different parts of the root prepared were central disc, distal root tip, apical root tip, outer radial part and root cortex (Figure 1).

Samples of 10 g were homogenized in 30 ml of acid extraction medium (Polytron). The amount of sample varied, but the ratio of sample to extraction medium was always approximately 1:3. The homogenized samples were left to stand for 10 min and then centrifuged at 10,000 g for 10 min (Beckman, J-25i, and Fullerton, USA). The supernatant was stored at 4°C until assayed for cyanogenic compounds.

The assay procedures were done as follows:

Total cyanide (cyanogenic glycosides+cyanohydrin+HCN): In a stoppered 1.5 ml tube 0.1 ml extract and 0.05 ml linamarase were added to 0.45 ml phosphate buffer pH 7.0. After incubation at 37°C for 30 min, the mixture was transferred to a 15 ml tube containing 0.6 ml 0.2M NaOH. After 5 min, the sample was diluted with additional 2.8 ml phosphate buffer (pH 6.0) and analyzed in the spectrophotometric procedure (Figure 2). 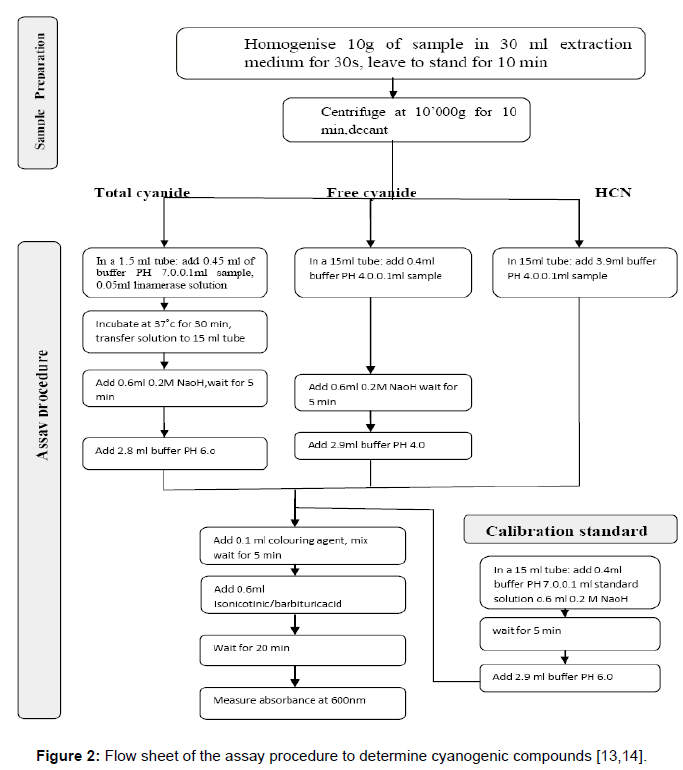 Standard solutions were assayed as described in IITA [14]. The calibration curve was established at least once every day. To the samples, 0.1 ml chloramin T reagent was added and mixed on a shaker. After 5 min, 0.6 ml colour reagent (isonicotinic acid/barbituric acid reagent) was added and mixed well. The absorbance was measured spectrophotometrically after 20 min at 600 nm. Duplicate analyses for samples and standard solutions were performed (Figure 3).

Total cyanide, free cyanide and HCN contents of the samples were calculated as mg HCN equivalent/kg dwt using the formulae below [14].

Data on cyanogenic glycoside levels was determined, calculated and recorded in mg/kg fresh weight. The computed levels of cyanogenic glycosides in the leaves, stems and different parts of the roots of both wild type and transgenic cassava were analysed by unpaired student’s t-test at a confidence level of 95% (P<0.05). Minitab statistical software (version 2012) was used for data analysis.

Determination of cyanogenic compounds content in cassava roots and leaves 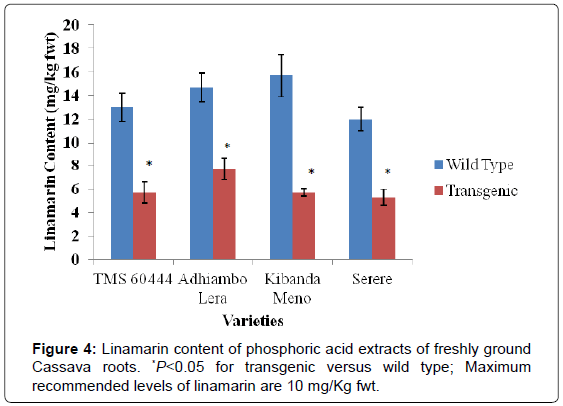 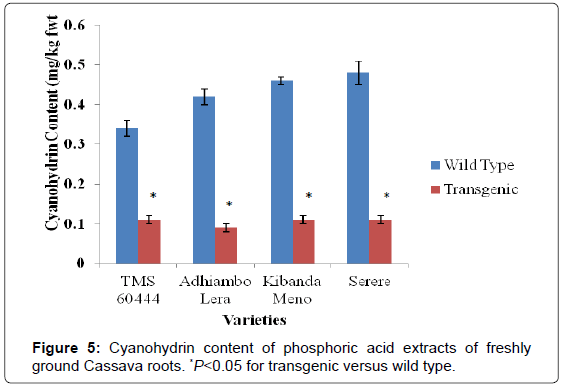 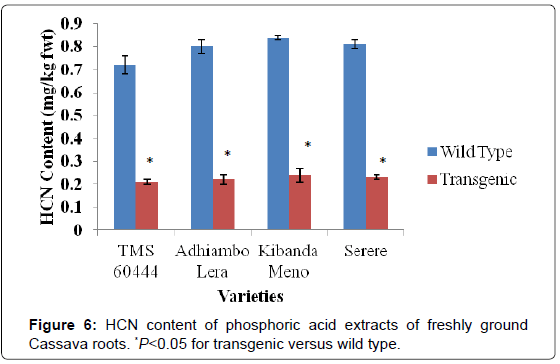 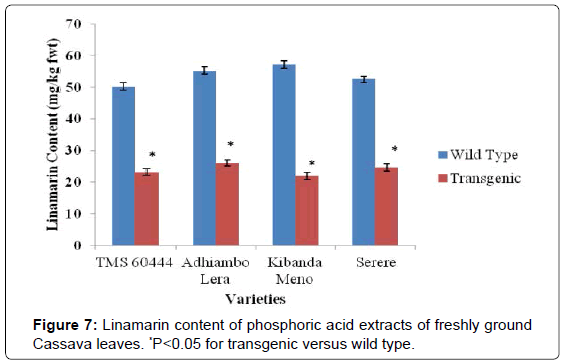 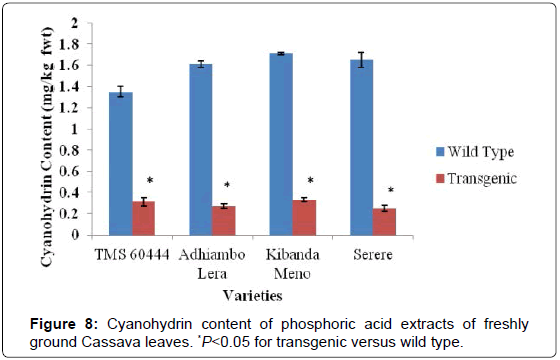 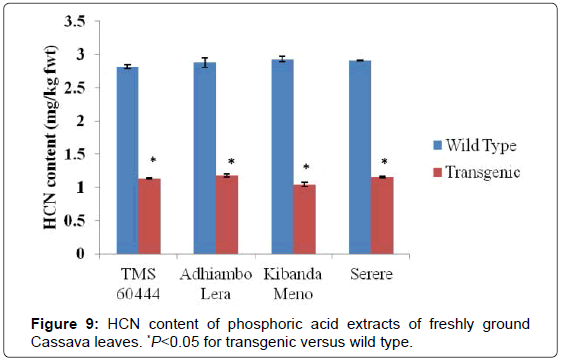 Determination of distribution of total cyanide content in Cassava roots 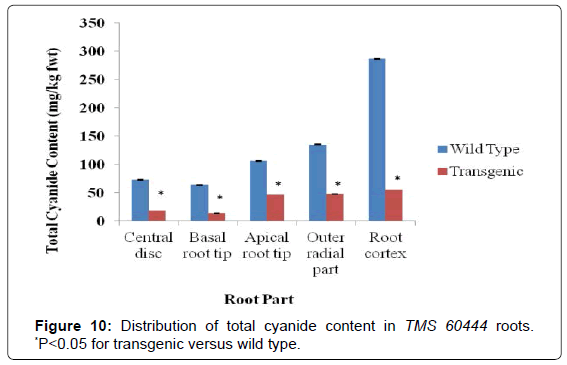 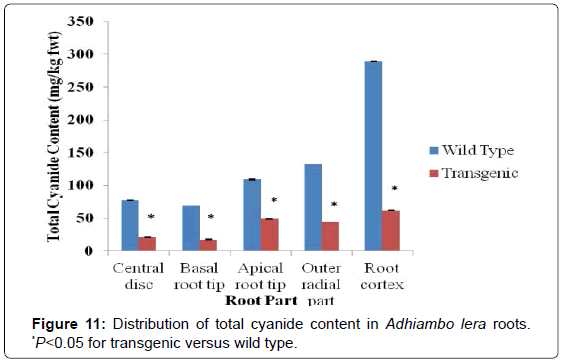 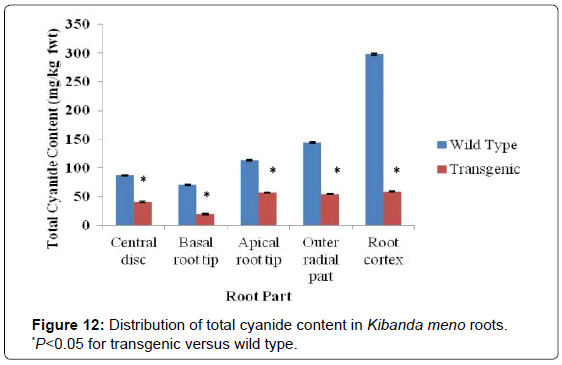 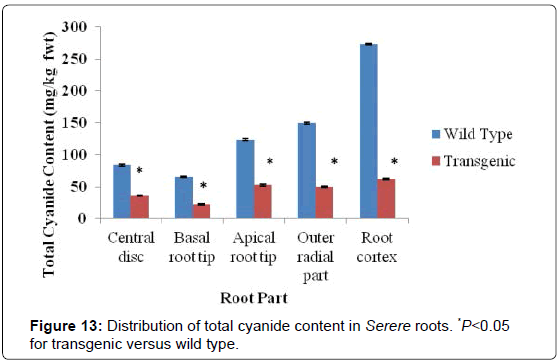 The wild type lines showed higher levels of cyanide content than the accepted levels by WHO [18,19]. Results of this study corroborate with previous findings that cyano-glycosides levels in cassava root vary widely between cassava cultivars of same variety, different tissues of the same plant, roots of the same plant and even within the root parenchyma [20-22].

The cyanogenic levels of known cassava cultivars range from less than 10 mg/kg fwt to more than 500 mg/kg fwt [28]. The total cyanide content in the roots of the wild type transgenic cassava lines used in this study did not surpass this ceiling. World Health Organization recommends 10 mg/kg body weight as the maximum safe cyanide level [18] for fresh cassava intake [16,29].

Linamarin levels were higher than the other cyanogenic compounds in all the wild type and transgenic cassava lines studied. This is perhaps attributable to the fact that linamarin is the predominant cyano-glycoside in cassava and that it is the metabolic precursor of cyanohydrin and hydrogen cyanide (HCN) [30]. Further, findings from other studies indicate that linamarin is more stable than other cyanogenic compounds even at varying storage temperatures. Cyanohydrin and HCN levels were very low in all the wild type and transgenic cassava genotypes used in this study. Nevertheless, that there were detectable cyanohydrin and HCN levels in the cassava genotypes evaluated is an indication that linamarase enzyme activity on linamarin was pronounced and that cyanohydrin was cleaved to HCN either spontaneously or via endogenous enzymatic cleavage by hydroxynitrile lyase

The RNAi technique has rapidly gained favor as a “reverse genetics” tool to knock down the expression of targeted genes in plants, as in other species, due to certain advantages that RNAi technology holds over gene disruptions caused by transposon or T-DNA insertion. The ability to target multiple gene family members with a single RNAiinducing transgene is one such advantage. Another is that gene knockdowns due to RNAi are dominant, whereas insertional or other loss-of-function mutations are recessive. The dominant aspect of RNAi allows the knock down of genes in polyploid genomes that contain four or more orthologs and are thus refractive to traditional mutagenesis [31,32].

Likewise, orthologs can be knocked down in F1 hybrids in which the RNAi-inducing transgene is introduced through only one of the parents. Finally, the dominance of RNAi allows one to save time by eliminating the additional generations needed to identify individuals that are homozygous for recessive loss-of-function alleles [31].

Against this background, it can be inferred from this study that it is possible that cyanide content was not reduced to zero value because RNAi is not a knock out strategy but rather, a knock down strategy. That gene knockdowns due to RNAi are dominant, is a welcome phenomenon because it implies that down regulation is expected to dominate even in subsequent generations of the transgenic cassava lines produced in this study. The targeted gene for knock down in this study, CYP79D1 gene, encodes cytochromes P450 oxidative enzymes that catalyze the committed step in biosynthesis of cyano-glycosides. Knock down of this gene sporadically reduces expression levels of this enzyme and therefore reduction of cyanide levels downstream.

In this study, analysis of cyanide content in roots and leaves of both wild type and transgenic lines showed that cyanide content was largely reduced by three folds in the transgenic lines. This was a confirmation of down regulation of expression of cytochrome P450 genes responsible for biosynthesis of cyano-glycosides undertaken by the authors in an earlier study [15]. This is a significant finding linking molecular data to phenotypic data.