A Novel Method for Determination of Fenofibric Acid in Human Plasma using HPLC-UV: Application to a Pharmacokinetic Study of New Formulations | OMICS International

A Novel Method for Determination of Fenofibric Acid in Human Plasma using HPLC-UV: Application to a Pharmacokinetic Study of New Formulations

Copyright: © 2014 Shah I, et al. This is an open-access article distributed under the terms of the Creative Commons Attribution License, which permits unrestricted use, distribution, and reproduction in any medium, provided the original author and source are credited.

A high performance liquid chromatography method for the determination of fenofibric acid (FA), the active form of fenofibrate (FBT) in human plasma was developed and validated with 500 μL of human plasma using 4’-chloro- 5-fluro-2-hydroxybenzophenone (CFHB) as internal standard (IS). The assay procedure involved a simple one step liquid/liquid extraction of FA and IS from human plasma into ethyl acetate. The organic layer was separated and evaporated under a gentle stream of nitrogen at 40°C. The residue was reconstituted in the mobile phase and injected on a Symmetry ShieldRP18 (150×4.60 mm) 5 μm column. Separation of FA and IS was achieved with a mobile phase consisting of acetonitrile: 0.02 M phosphoric acid (50:50 v/v) at a flow rate of 1 mL/min. Nominal retention times of FA and IS were 6.1 and 9.1 ± 0.5 min, respectively. Absolute recovery of FA using a single step liquid/liquid method was 79.8%. A calibration curve was established for a range of concentrations 0.05 to 10.0 μg/mL with a regression coefficient (r2) of 0.9988. The lower limit of quantification (LLOQ) of FA was 0.05 μg/mL. The intraand inter-day precision for the measurement of FA quality control samples (0.05, 0.12, 1.20 and 8.20 μg/mL), were in the range 4.6-16.9% and 4.4-17.2% relative standard deviations respectively. The accuracy in the measurement of QC samples for FA was in the range of 82.0-104.3% (intra-day) to 95.0-104.9% (inter-day). The method developed was successfully used to investigate the pharmacokinetics and bioequivalence between a micronized Lipidil-Micro™ capsule formulation and a nanonised fenofibrate Lipidil-EZ™ tablet formulation.

Fenofibrate (Figure 1a) has been a widely used drug in the treatment of dyslipidaemia [1]. It was originally launched in 1975 as a standard formulation and is now marketed in over 85 countries. Chemically, FBT is 2-[4-(4-chlorobenzoyl)phenoxy]-2-methyl-propanoic acid,1- methylethyl ester. Fenofibric acid (Figure 1b), the active metabolite of FBT, contributes to a reduction in total cholesterol, LDL cholesterol, apolipoprotien B, total triglycerides and triglyceride rich lipoprotein [2-7]. In addition, treatment with FBT also results in elevation of high-density lipoprotein (HDL) and apoproteins, viz., apoAI and apoAII. The effects of FA on lipid metabolism are mainly mediated through activation of the peroxisome proliferator-activated receptor α [8-10]. Following oral administration, FBT is well absorbed from the gastrointestinal tract, and is rapidly hydrolysed by the CYP3A4 isozyme to FA [11-13]. The maximum plasma concentrations of FA are achieved within 4-5 h following oral dosing of FBT. No unchanged FBT is detected in plasma after oral dosing. The elimination half-life of FA is approximately 20 h [13,14]. FA is primarily conjugated with glucuronic acid and then excreted in urine [4,15]. No unexpected accumulation of FA has been reported during repeat administration [16,17]. After an oral administration of 100 or 200 mg of FBT, the typical peak concentration (Cmax) for FA is approximately 5-15 μg/ mL [18-23]. The use of non-statin drugs such as fibrates has been modest and many health care professionals avoid consideration of combination therapy due to an inordinate fear of toxicity. In order to study the pharmacokinetic parameters of FA in human studies, it is necessary to develop a method for its determination in plasma. There have been several papers on the determination of FBT or its metabolites in biological fluids using techniques such as HPLC, GC-MS and LCMS [7,17,21-26]. Our method uses a simple one step liquid/liquid extraction procedure and HPLC-UV detection with a novel internal standard of 4’-chloro-5-fluro-2-hydroxybenzophenone (CFHB), (Figure 1c). Compared to previously reported methods, the sensitivity and recovery using this method is superior, since the LLOQ is 0.05 μg/ mL and the calibrated range is 0.05 to 10.0 mg/L. 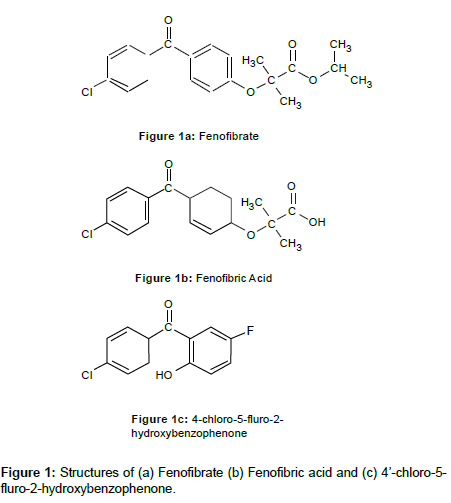 Figure 1: Structures of (a) Fenofibrate (b) Fenofibric acid and (c) 4’-chloro-5- fluro-2-hydroxybenzophenone.

Lipidil is registered in Australia for the treatment of dyslipidaemia and hypercholesterolemia. The method developed was used to investigate the bioavailability of two different oral formulations of fenofibrate: the first formulation consisted of a 200 mg capsule of Lipidil-Micro™ containing micrononized fenofibrate material, while the second was a 145 mg of nanonized Lipidil-EZ™ tablet. This study was performed by comparing plasma concentration level profiles of FA from 41 healthy volunteers.

The LC system consisted of a Model 1100 series liquid chromatography equipped with a quadratic pump, vacuum degasser, thermostatic column compartment, auto-sampler and a UV detector; all purchased from Hewlett-Packard (Stockport, Cheshire, UK). The separation of fenofibric acid and CFHB (IS) was carried out using a mobile phase consisting of a mixture of acetonitrile and 0.02 M phosphoric acid (50:50, v/v) on a Symmetry Shield™ RP18 (150×4.60 mm) 5 μm column obtained from (Waters UK Ltd., Hertfordshire, UK) kept at ambient temperature. Before use, the mobile phase was degassed for 15 min in an ultrasonic bath. The flow rate was 1 mL/min and UV detection was carried out at 287 nm. All data obtained were processed and stored on a Vectra XA computer from Hewlett-Packard using the HP Chemstation (Rev.A.04.02 HP-1990-1996) software.

Preparation of stock and standard solutions

Stock solutions of FA and IS were prepared by dissolving appropriate amounts of the compounds in methanol to give final concentrations of 10 mg/mL and 1 mg/mL respectively. These were stored at 2-8°C, prior to use. Further dilutions of these stocks were made with methanol to give working solutions of 10 μg/mL for IS and 1 mg/mL and 10 μg/mL for FA. These working solutions were used to spike plasma samples either for a calibration curve (0.05 - 10 μg/mL) or for quality control during the validation. Calibration samples were prepared by spiking 475 μL of control human plasma with the appropriate amount of analytes (25 μL FA and 125 μL IS) on the day of analysis. Samples for determination of recovery, precision and accuracy were prepared by spiking control plasma in bulk at appropriate concentration [0.05 μg/ mL (QC-lowest), 0.12 μg/mL (QC low), 1.20 μg/mL (QC medium) and 8.20 μg/mL (QC high)]. These solutions were prepared and stored at -20°C, until analysis.

To 500 μL plasma sample, 125 μL of IS solution was added and mixed for 30 seconds with a vortex mixer. After the addition of 3 mL ethyl acetate and 1 mL of 1 M HCl, the mixture was vortexed for 5 min, followed by centrifugation for 5 min at 5,500×g. The top organic layer was separated and evaporated to dryness at 40°C using a stream of nitrogen. The residue was reconstituted in 100 μL of mobile phase and 25 μL was injected into the HPLC system.

The interference of endogenous fluid in plasma was investigated by analysing between three and six independent blank plasma samples and plasma spiked at the lower limit of quantitation (LLOQ).

A calibration curve was acquired by plotting the peak area ratio of analytes FA:IS against the nominal concentration of calibration standards. The concentrations used were 0.05, 0.15, 0.30, 0.65, 1.25, 2.50, 5.00 and 10.00 μg/mL FA. The calibration needed to have a correlation coefficient (r2) of 0.98 or better in order to be acceptable, according to US Food and Drugs Administration Guidelines (FDA). The acceptance criterion for the standards was within ± 15% deviation from a nominal value, except at LLOQ, which was set at ± 20%.

The inter-and intra- assay precision and accuracy were estimated by analysing six replicates containing FA at four levels QC, i.e., 0.05, 0.12, 1.20 and 8.20 μg/mL. The criterion for acceptability of the data was accuracy within ± 15% deviation from nominal value, except at LLOQ, which was set at ± 20%. A typical chromatogram of FA and CFHB in extracted human plasma is shown in Figure 2. 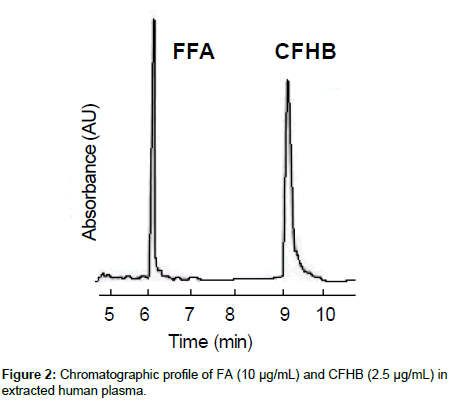 The absolute recovery of FA and IS, through the liquid/liquid extraction procedure was determined by comparing the responses of analytes extracted from the six replicate QC samples at each level with the un-extracted samples. The recovery of the IS was determined at a single concentration.

The stability of FA and IS in the biomatrix over 48 h was determined at ambient temperatures for four concentrations. The results obtained from the initial measurement were used as a reference to determine the relative stability of the analytes at subsequent points. Freeze stability of FA and IS in human plasma was assessed by analyzing the QC samples stored at -20°C. The stability of FA in human plasma following repeated freeze/thaw cycles was accessed using QC sample spiked with FA. The samples were stored at -20°C between freeze/thaw cycles. Samples were considered to be stable if %SD and precision (% RSD) is ± 15% of nominal value of QC’s, except for LLOQ, where it should be no more than 20% of the nominal value.

The method developed was used to investigate the plasma profile after two oral doses of FBT: a Lipidil-Micro™ 200 mg of micronised fenofibrate capsule as a reference and a Lipidil-EZ™ 145 mg nanonised fenofibrate tablet (Solvey Pharmaceuticals, Brussels, Belgium). A bioequivalence study on 41 healthy young male volunteers was conducted. The subjects received one capsule containing 145 mg of Lipidil-EZ™ and blood samples were collected during 72 h. The plasma concentrations of FA were determined for both formulations.

Various combinations of mobile phases were tried in order to get the best peak resolution and sensitivity for the analyte. The best resolution was achieved using 0.02 M phosphoric acid: acetonitrile (50:50, v/v) at 1 mL/min flow rate. The selectivity of the analytical method was investigated in order to prove that the method could be used for quantitative analysis of FA. Potential interfering substances in a biological matrix include endogenous fluid and metabolites of FBT. The selectivity was studied by analysing four individual blank plasma samples from different volunteers. No endogenous interference was observed at the analyte retention time.

The intra and inter day precision and accuracy are given in Table 1 along with lower limit of detection and linear range.

Un-extracted and extracted quantity controls were measured at 0.12, 1.2 and 8.2 μg/mL by injecting six replicates at each level. The absolute mean recovery was 79.8% for FA.

The method was applied to the plasma samples provided by 41 healthy, young, male volunteers who took part in a bioequivalence study. An ethics committee approved the protocol and the volunteers provided informed written consent to participate. The bioequivalence study was conducted according to the principles of the Declaration of Helsinki [27]. The study demonstrated bioequivalence between a micronised fenofibrate (original 200 mg capsule formulation of Lipidil- Micro™) and a new formulation of 145 mg Lipidil-EZ™ tablets. Bioequivalence was assessed by measuring plasma concentrations of FA. Plots of the plasma FA levels (μg/mL) versus post-dose sampling time (h) for the micronized and the nanonized formulations are presented in Figure 3. Pharmacokinetic parameters (AUC0→72, AUC0→∞, Cmax, tmax) calculated from these data are presented in Table 2 and clearly demonstrate the bioequivalence of the Lipidil-EZ™ and the micronized formulation Lipidil-Micro™. Results were obtained from each sample in duplicate and the mean calculated. The concentration profiles of the tested drug and reference drug were similar. 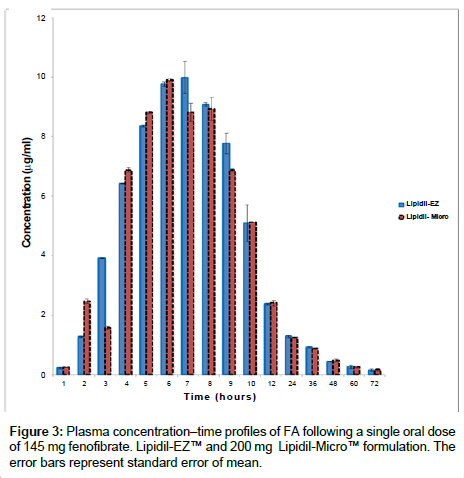 Table 2: Pharmacokinetic parameters, where AUC shows area under curve and Cmax shows the peak plasma concentration of the drugs after administration and tmax means time to reach Cmax.

A simple, precise, accurate, economical and robust method was developed and validated to determine fenofibric acid in human plasma using a novel internal standard (4’-chloro-5-fluro-2- hydroxybenzophenone) to meet the requirements for a pharmacokinetic investigation of this compound. Moreover, the sensitivity of this method is higher, since the determined LLOQ is 0.05 μg/mL compared to previously reported methods [21-25]. This method gives narrow peaks, satisfactory selectivity and a short run-time as compared to the published methods. FA and CFHB were extracted using a single step liquid/liquid extraction, thus reducing cost, time and effort. The developed method has been successfully applied to the determination of FA in plasma levels for investigating the bioequivalence of a new oral formulation of FBT (Lipidil-EZ™ by Solvey Pharmaceuticals).