Copyright: © 2014 El-Serafi I, et al. This is an open-access article distributed under the terms of the Creative Commons Attribution License, which permits unrestricted use, distribution, and reproduction in any medium, provided the original author and source are credited.

Fast and selective liquid chromatography-mass spectrometry (LC-MS) method was developed for the quantification of posaconazole in different mouse organs including liver, heart, brain, kidney and lung. Organs were homogenized and diluted in isotonic NaCl solution. Protein was precipitated using acetonitrile containing internal standard and analyzed. The analysis was carried out using gradient condition with mobile phases consisting of aqueous formic acid and pure acetonitrile. Analysis was run at a flow-rate of 0.51 mL/min. The method was selective with a limit of quantification of 0.5 μg/mL in homogenate at a sample volume of 100 μL. The standard curve was linear over a concentration range of 0.5-10 μg/mL for all organs. The inter-day and intra-day coefficient of variation values were all less than 15%. Hence, the method is suitable for use in pharmacokinetic and bioavailability studies of posaconazole in tissues.

Posaconazole is a highly lipophilic drug. It is one of the more recent triazole antifungals critical in the treatment of invasive mycoses [1]. It disturbs fungi growth by inhibiting cytochrome P450 lanosterol 14α-demethylase (CYP51A1) that leads to blockage of ergosterol synthesis in the fungal cell membranes. The end result of this reaction is the increase of fungi cell membrane permeability and cessation of cell growth and replication [2,3]. Posaconazole is active against several organisms including Candida spp, zygomycota and Aspergillus spp [4,5].

Posaconazole is orally bioavailable and reaches plasma maximum concentration by 10 hours post dose, meaning that its elimination is rather slow and the mean of its half-life is 20 hours [6]. Similar to previous triazoles, posaconazole inhibits CYP3A4; however, the risk of drug-drug interaction is still considered to be lower compared to earlier drugs, partially because posaconazole elimination by CYP-pathways is very limited [6]. Posaconazole is excreted in the feces (76.9%), mainly as unchanged drug, or excreted in urine (14%) as conjugated drug or unchanged [6]. In vitro studies have shown that posaconazole is conjugated with UDP-glucuronosyltransferase 1A4 (UGT1A4) to form posaconazole glucuronide [7].

Several studies were reported to detect posaconazole in human plasma using high performance liquid chromatography (HPLC) especially in patients with hematological diseases [8,9]. Furthermore; liquid chromatography-mass spectrometry (LC-MS) was also utilized for the measurement of posaconazole plasma concentration in order to investigate its pharmacokinetics [10-12]. All these reported methods didn’t analyze posaconazole in different tissues and were not validated to be used in different organs. Applying any of these methods for measuring posaconazole in tissues need further validation for each tissue.

Much less is known about the distribution of posaconazole into different tissues. However, this unresolved issue needs to be addressed in order to better understand the optimal dose regimens for different loci. In the present study we utilized LC-MS as a simple, fast and quantitative method for the detection of posaconazole from posaconazole-spiked mouse tissues, which could be employed as a model to evaluate the extraction and analyses of tissue concentrations. The present method showed high extraction yield and good reproducibility and can thus be used to determine posaconazole in tissue from animals and patients in order to determine organ toxicity.

All solvents were of analytical grade with purity (>99%): methanol, acetonitrile and formic acid (Merck, Darmstadt, Germany).

Tissues samples from brain, heart, liver, lung and kidney were obtained from C57BL/6N mice at the age of 8-10 weeks (Charles River, Sulzfeld, Germany). All animal experiments were approved by the Stockholm Southern Ethical Committee on Animal Research and performed in accordance with Swedish Animal Welfare Law.

Stock solutions of posaconazole and I.S. were prepared in methanol (500 μg/mL and 1000 μg/mL, respectively) and stored at -20°C. A working I.S. solution was prepared at a concentration of 150 ng/mL in 0.1% formic acid in acetonitrile and was kept at +6°C until sample preparation.

A serial dilution technique was employed to obtain the final standard concentration in the range of 0.48-10.07 μg/mL for all organs except heart and lungs (0.51-10.14 μg/mL). Calibration curves were prepared daily. Quality control samples at two levels were also prepared daily from independently prepared stock solutions in mouse tissues.

Pre-weighted mouse organs including liver, heart, brain, kidney and lung were placed in 0.9% NaCl and homogenized by probe sonication for up to 5 minutes depending on the tissue type. After sonication, NaCl volume was adjusted to 1:6 w:v, except for the heart which was adjusted to 1:10 w:v. Posaconazole was added at different concentrations for standard curves and quality controls (QCs).

Acetonitrile containing internal standard (200 μL) was added to 100 μL of homogenate/sample in a 2 mL glass HPLC vial and then vortexed for at least 20 seconds. After centrifugation at 2000 × g for 5 minutes at ambient temperature (room temperature), 1 μL aliquot of supernatant was injected onto the Agilent LC-MS system.

Chromatography was performed at 40°C at a flow-rate of 0.51 mL/ min using a gradient condition. The mobile phases consisted of 25 mM formic acid as solvent A and 100% acetonitrile as solvent B. The analysis was run in a gradient with an initial flow of 30% B for 4 min increased to 75% B, then decreased to 30% B for 1.5 min, making a total run of 5.5 min.

Mass spectrometry was operated in SIM using electrospray ionization in positive mode at the following ions: m/z 351 for posaconazole and m/z 348 for the internal standard. The gas temperature was set at 300°C, drying gas flow at 10 L/min, nebulizer pressure at 25 psi and voltage cap at 3500 V.

The protocol described by Shah et al. [13,14] was employed for method validation. Linearity was determined through two quality controls (QCs) including blanks for each tissue. Results were taken from inter-day precision for 5 organs. Standard and control were calculated separately against the calibration curve from the same tissue. The quantification analysis was based on the ratio peak height analyte/ peak height I.S. and equal weighting in a linear regression analysis equation

Low and high quality controls were run five times in pentaplicate in each tissue and quantitated by standard curves in the same matrix to evaluate the intra-day precision and the inter-day precision in each tissue. Each run also included blank samples for all tissues to detect interfering substances. Limit of detection (LOD) was theoretically calculated through signal to noise ratio (S/N). Stability of the analyte stock solution in methanol and working solution in plasma was established at different time points and temperatures.

Extraction recovery, matrix effect, and process efficiency were investigated for each organ at one concentration level. Posaconazole was added A) before protein precipitation, B) after protein precipitation and in C) initial mobile phase composition. Analyte peak area ratio of A/B corresponded to extraction recovery, B/C to matrix effect, and A/C to process efficiency [15].

Representative SIM chromatographs of selected tissues obtained from post dose human patient (post mortem) and blank mouse tissue are presented in Figures 1-10. No significant interfering peaks were detected at the retention times of the peaks of interest, neither as well as nor in the ion channel, in the post dose sample. The retention times for posaconazole and I.S. were 2.9 min and 1.7 min, respectively. 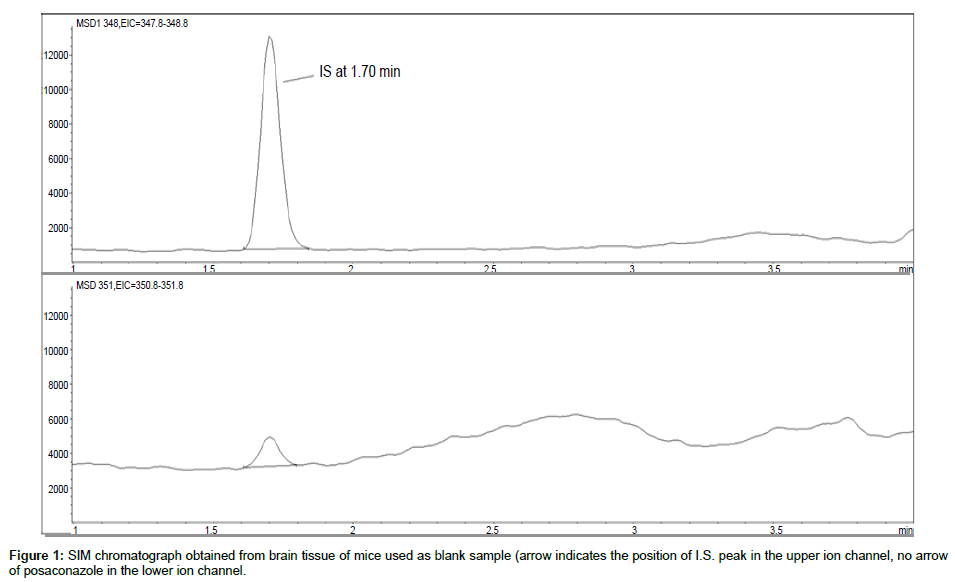 Figure 1: SIM chromatograph obtained from brain tissue of mice used as blank sample (arrow indicates the position of I.S. peak in the upper ion channel, no arrow of posaconazole in the lower ion channel. 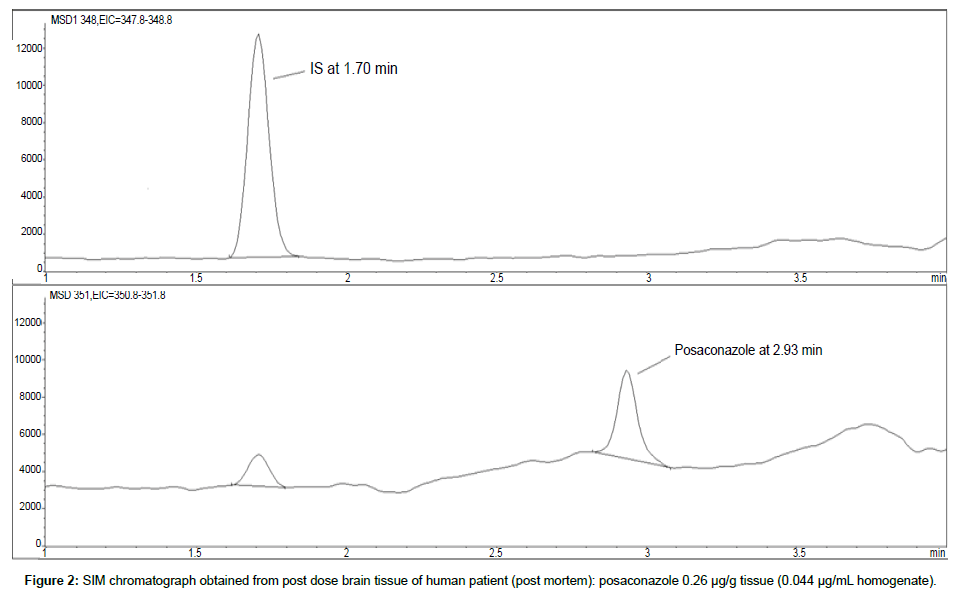 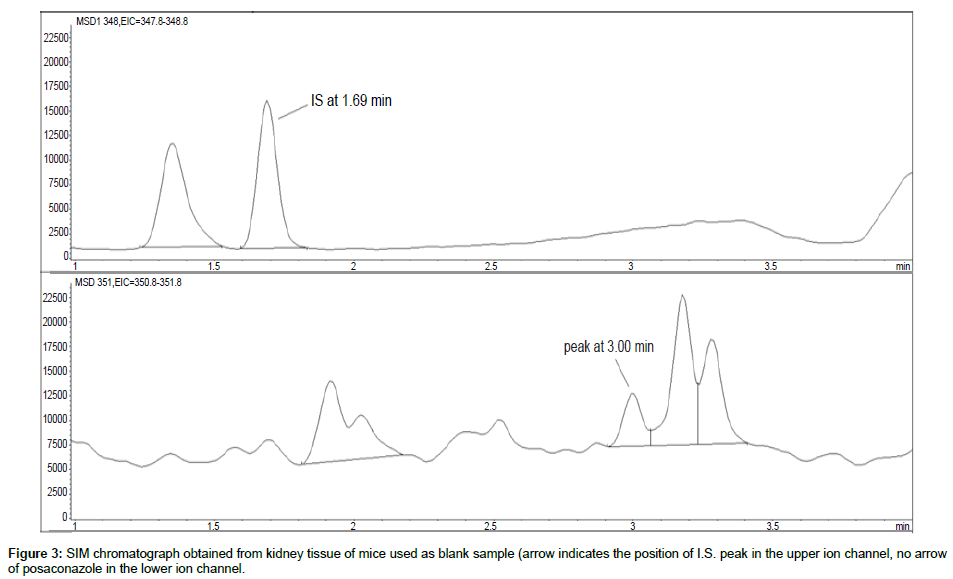 Figure 3: SIM chromatograph obtained from kidney tissue of mice used as blank sample (arrow indicates the position of I.S. peak in the upper ion channel, no arrow of posaconazole in the lower ion channel. 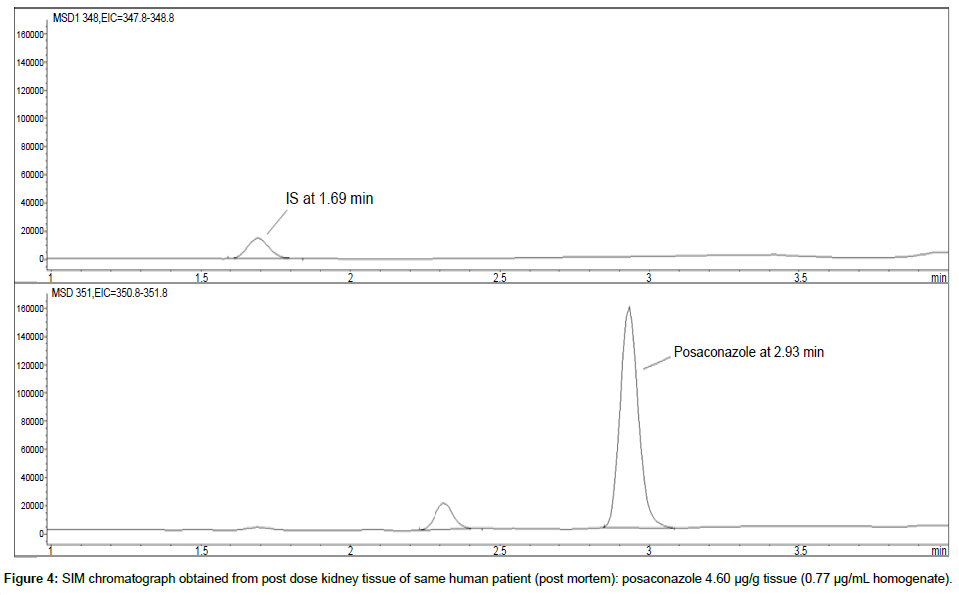 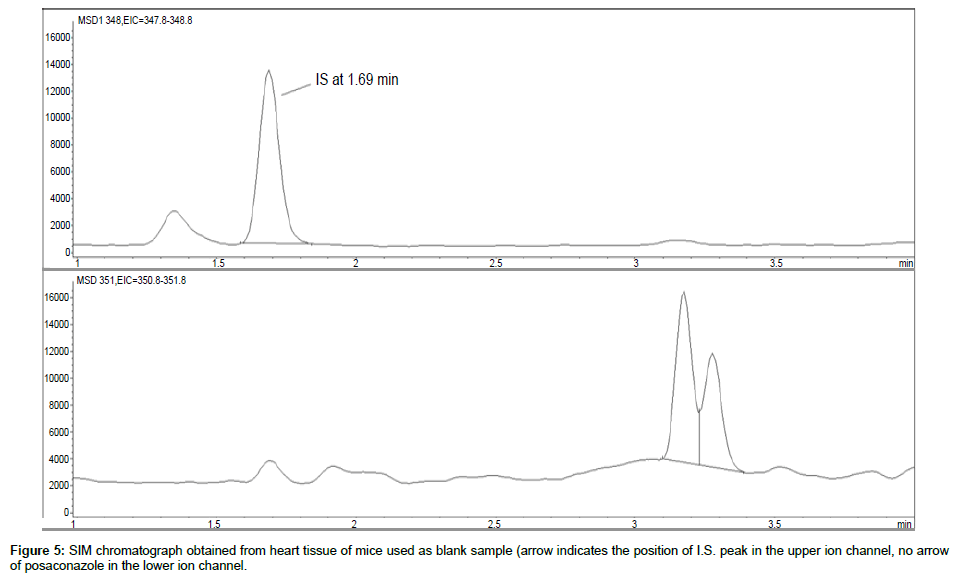 Figure 5: SIM chromatograph obtained from heart tissue of mice used as blank sample (arrow indicates the position of I.S. peak in the upper ion channel, no arrow of posaconazole in the lower ion channel. 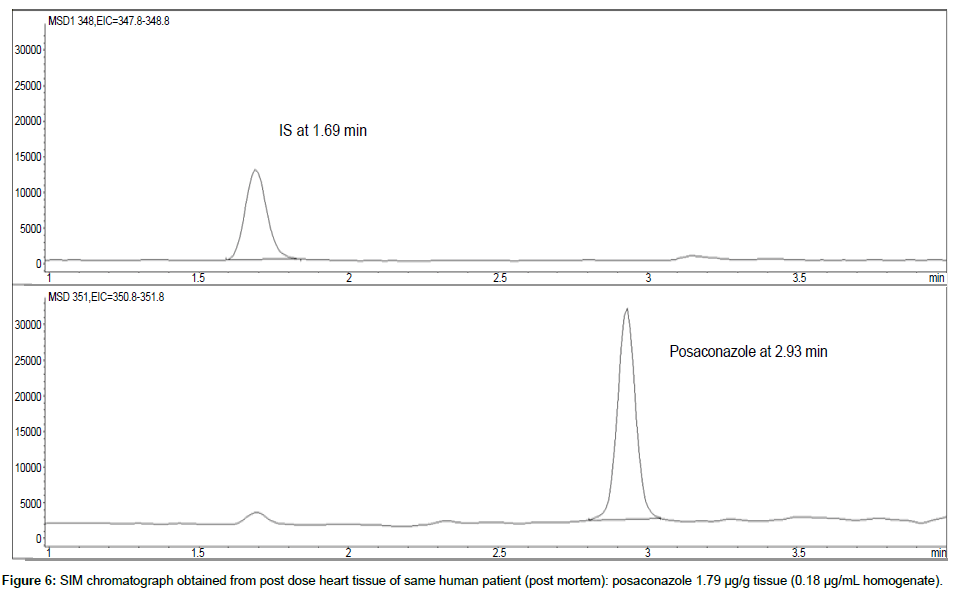 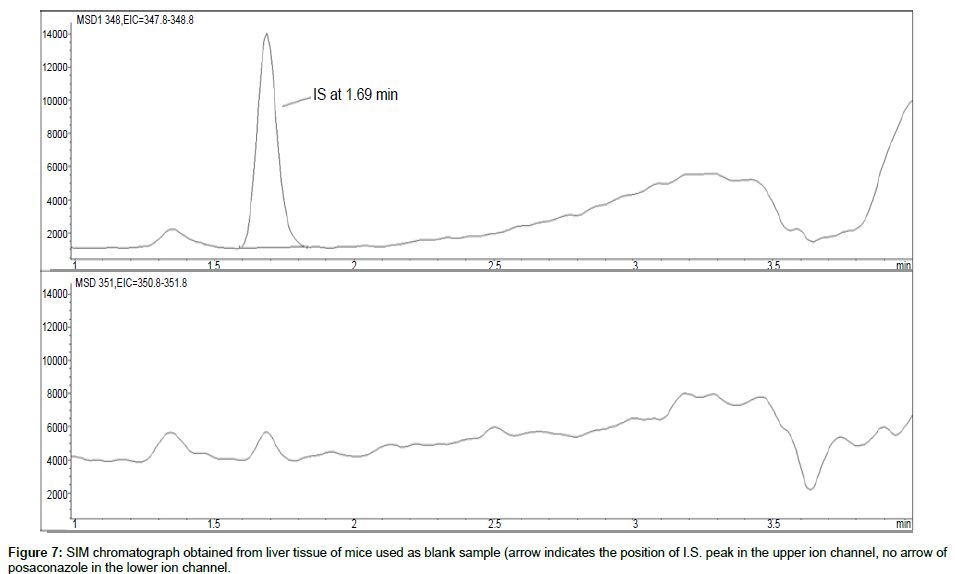 Figure 7: SIM chromatograph obtained from liver tissue of mice used as blank sample (arrow indicates the position of I.S. peak in the upper ion channel, no arrow of posaconazole in the lower ion channel. 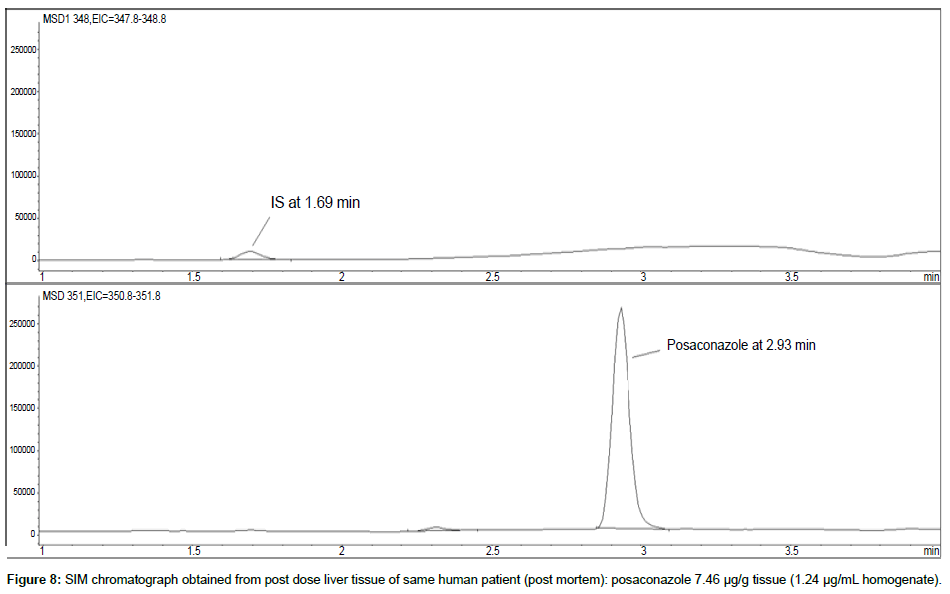 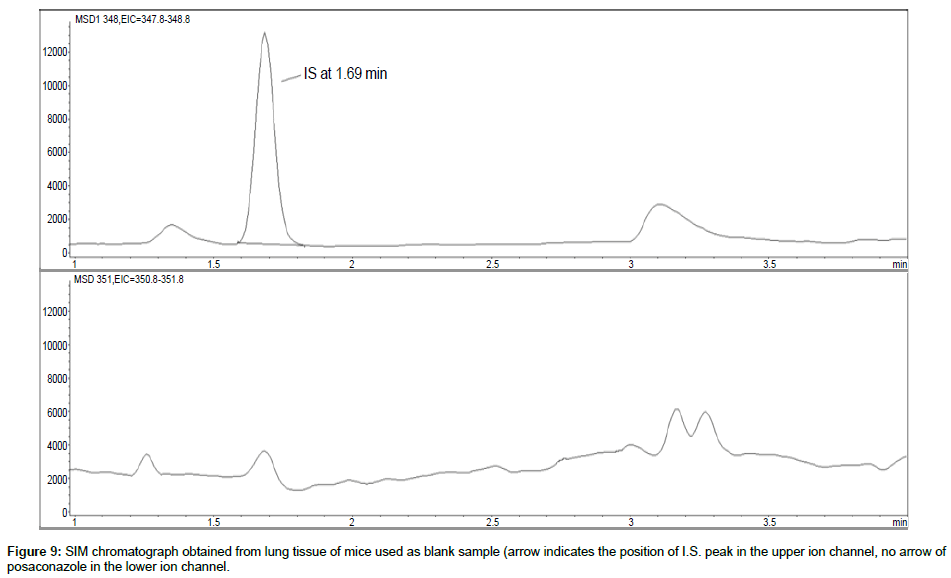 Figure 9: SIM chromatograph obtained from lung tissue of mice used as blank sample (arrow indicates the position of I.S. peak in the upper ion channel, no arrow of posaconazole in the lower ion channel. 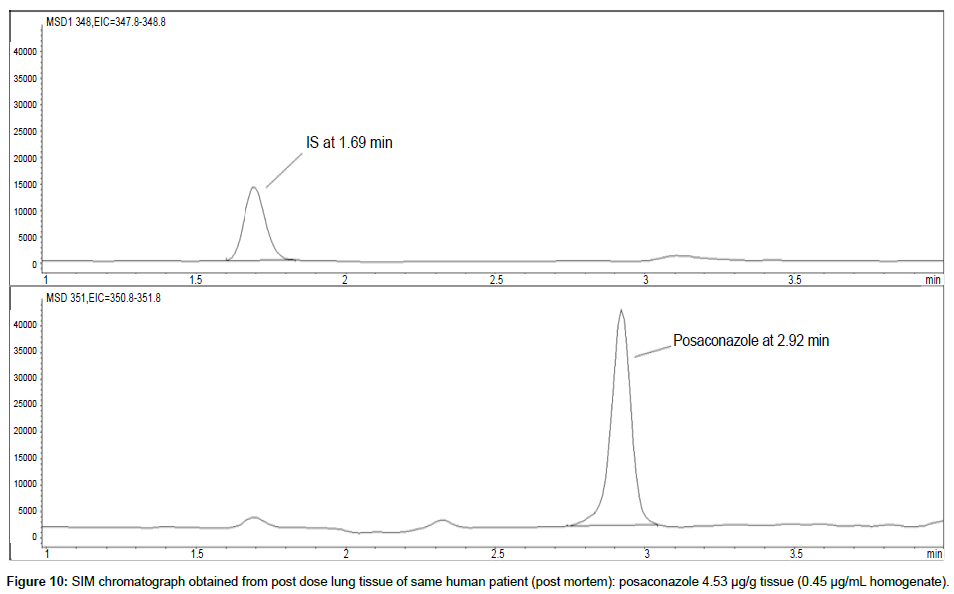 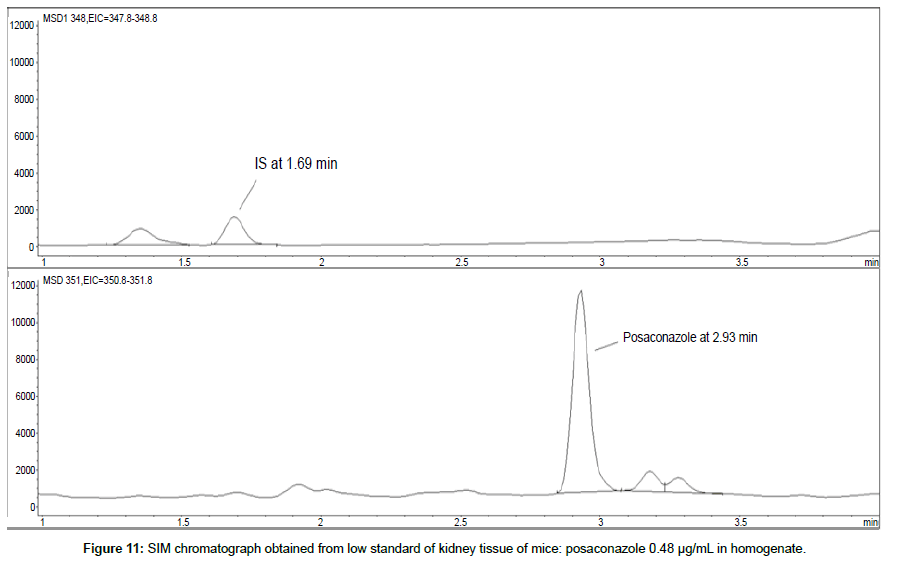 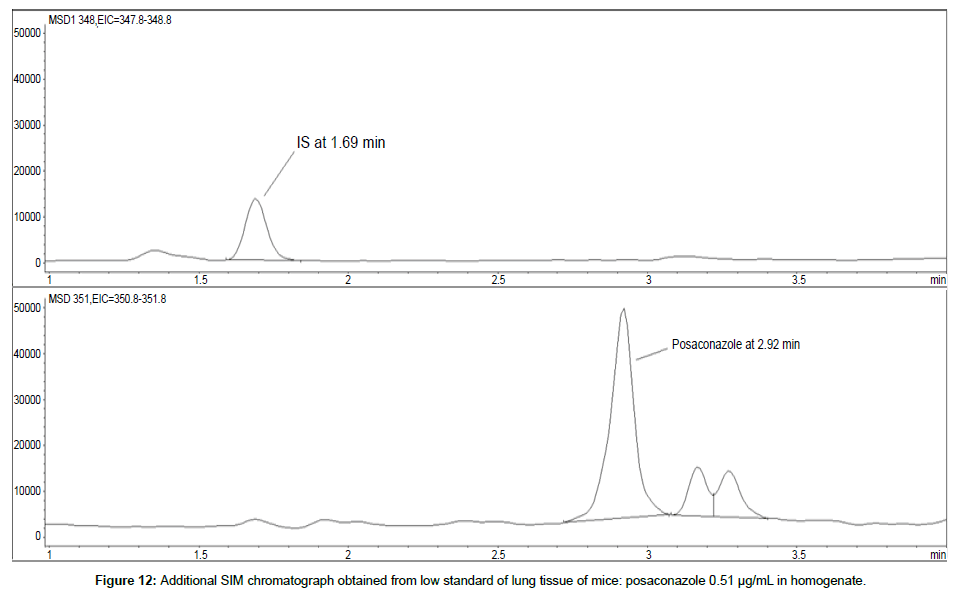 Table 2: Accuracy and precision for the 5 organs were established from the analysis of standard curves and QCs (n=5).

No quantifiable carry over effect in any tissue homogenate was found in blank samples after injection of approximately 10 μg/mL posaconazole; however, a larger injection volume will affect the symmetrical form of a chromatogram.

The precision and accuracy were determined for all five organs in pentaplicate for intra-day and inter-day variations. The QC results showed a standard deviation <15% for all values obtained, including low and high QCs, compared to the nominal values (Tables 3 and 4).

Table 3: Precision and accuracy for all five organs in pentaplicate for the intraday variations. The QC results showed a standard deviation <15% for all values obtained compared to the nominal values.

Table 4: Precision and accuracy for all five organs in pentaplicate for the interday variations. The QC results showed a standard deviation <15% for all values obtained compared to the nominal values.

A high control of plasma was exposed to normal light at room temperature for 24 and 48 hours respectively and analyzed in triplicate; the recovery was calculated to 101.4% at 24 h and 101.9% at 48 h showing no sign of degradation.

Process efficiency was determined in triplicate at one level by analyzing blank biological fluids from 5 different tissues spiked with posaconazole against a solution of 40% acetonitrile in aqueous 25 mM formic acid spiked posaconazole. Results showed high efficiency in all organs (101-112%) (Table 5).

We developed and validated a sensitive LC-MS procedure with selective ion monitoring by single quadrupole mass spectrometer for the determination of posaconazole in different tissues. The reported method offers several advantages such as a rapid and simple extraction scheme, improved sensitivity, short chromatography run time, and the ability to work with very small homogenate sample volume. This makes the method suitable for use in settings where normal doses are administered, and/or where there are limitations to the amount of tissue that can be collected.

We managed to measure up to approximately 10 μg/mL posaconazole using LC-MS with consistent linearity in calibration. ¼ of the sample should be diluted with ¾ blank tissues. Substances showed good stability for up to 48 hours in room temperature.

Posaconazole is known for its organ toxicity in clinical situations, and the present method is simple, robust and reliable. It can be easily adapted to determine tissue concentrations of posaconazole.

We wish to acknowledge grant support from the Swedish Cancer Society and the Swedish Childhood Cancer Foundation.