2Department of Organic and Biochemistry, Faculty of Chemistry, University of Tabriz, Iran

Copyright: © 2013 Ramazani A, et al. This is an open-access article distributed under the terms of the Creative Commons Attribution License, which permits unrestricted use, distribution, and reproduction in any medium, provided the original author and source are credited.

In this work, we aim to study the development and characterization of thermosensitive polymer-coated iron oxide nanoparticles as a novel ferroFluid (fF) with thermosensitive properties. For this purpose, polymerization was conducted in the presence of various ratios of N-isopropylacrylamide (NIPAAm), acrylamide (AAm) and N-vinylpyrrolidone (NVP) as monomers, and N,N´-azobisisobutyronitrile (AIBN) as an initiator. Particles having average sizes of 8 nm and 8–10 nm were respectively observed for Fe3O4/fF and Fe3O4/polymers. As visualized by transmission electron microscopy (TEM) images, both the coated and uncoated iron oxide nanoparticles were uniform in shape and seem to have been monodispersed. Vibrating sample magnetometry (VSM) measurements of Fe3O4/VTES-fF and Fe3O4/Poly (NIPAAm- AAm NVP) at room temperature showed that they had a superparamagnetic nature with saturation magnetization values of 23.14 emu/g and 4.33 emu/g, respectively. In the thermosensitivity analysis, the lower critical solution temperature (LCST) was around 36-40°C, as determined by UV-Vis absorption spectroscopy. Furthermore, the polymerization of (NIPAAm-AAm-NVP) with the surface modified magnetic ferroFluid was confirmed by Fourier transform infrared (FTIR) spectroscopy and thermogravimetric analysis (TGA). These aqueous, stable, magnetic nanoparticles coated with temperature-sensitive polymers have attracted great attention because of their various applications in the fields of biotechnology and medicine.

Recently, water-based ferroFluids have attracted a great deal of interest because of their potential medical applications [1-5]. The results of several studies demonstrate that surface modification of magnetite particles by citric acid (CA) allows the formation of steric repulsive forces between the nanoparticles, and can consequently provide long-term stability [6,7]. The introduction of covalent linker groups allows the permanent attachment of polymer chains to individual particles. In general, silane-coated iron oxide nanoparticles (NPs) maintain the physical characteristics of naked NPs with high saturation magnetization. Superparamagnetic nanoparticles (MNPs) coated with poly (N-isopropylacrylamide) as a temperature-sensitive polymer play an important role in the fields of biotechnology and medicine because of the double response characteristic of magnetism and temperature [8-10]. In the current work, after the preparation of Fe3O4 nanoparticles by chemical co-precipitation, the nanoparticles were modified directly by vinyltriethoxysilane (VTES) to produce a template site for radical polymerization. N-isopropylacrylamide, acrylamide and N-vinylpyrrolidone were grafted onto the modified nanoparticles by surface-initiated radical polymerization.

Magnetite nanoparticles were prepared by co-precipitation of Fe2+ and Fe3+ ions from a mixture of FeCl3.6H2O and FeCl2.4H2O (2:1 molar ratio) upon addition of NH4OH [11]. VTES was bound to the surface of Fe3O4/fF following a procedure for linking VTES to a carboxyl group. In a three-necked flask, 17 mL of absolute ethanol were added to fF under Ar. While stirring the reaction mixture, 3.5 mL of 25% NH4OH were added. The reaction mixture was heated to 50°C and then 1.7 mL of VTES was added while the mixture was continuously mechanically stirred. The reaction was allowed to proceed at 50°C for 8 h under continuous stirring. The resultant products were then cooled to room temperature. The graft polymerization was synthesized by free radical polymerization, as shown schematically in Figure 1. In a typical VTES-fF reaction, 0.069 g of AIBN, 40 mL absolute ethanol and 10 mL of deionized water were added to a three-necked flask. The reaction was performed with mechanical stirring under Ar for 30 min, then heated to 70°C, and different molar ratios of NIPAAm, AAm, NVP (93.1:4.6:2.3, 95:2.5:2.5 and 97:1.5:1.5), 7 mL of absolute ethanol and 7 mL of deionized water were added dropwise to the flask over 1 h. The graft polymerization was allowed to proceed at 70°C for 8 h. Subsequently, the products were dialysed against water using a dialysis membrane (MW=12000) for 72 h to remove unreacted monomers and unbound polymers. 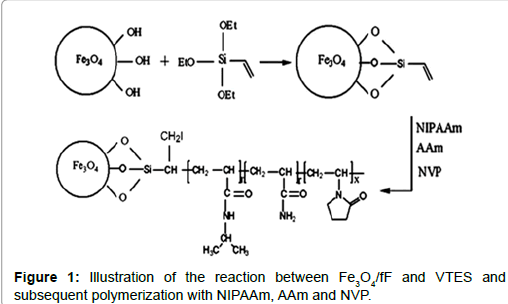 Figure 1: Illustration of the reaction between Fe3O4/fF and VTES and subsequent polymerization with NIPAAm, AAm and NVP.

Fourier transform infrared (FTIR) spectroscopy measurements of the magnetite particles and the Fe3O4/polymer in KBr pellets were takenusing a Bruker FTIR model Tensor 27 spectrometer. A small amount of nanoparticle powder was milled with KBr, and the mixture was pressed into a disk for analysis. The characteristic absorption bands of the hydrophilic Fe3O4/fF at 565 cm-1 were attributed to Fe-O bonds. Peaks appeared at 1650, 1543 and 1458 cm-1 due to the stretching vibrations of C=O, and the bending vibration of -NH and -NH2, respectively; absorption peaks at 3444 cm-1 belonged to the stretching vibration of the -NH groups from NIPAAm and AAm; and absorption peaks at 2972, 2932 and 2869 cm-1 were due to the symmetric and asymmetric stretching vibrations of the C-H groups (Figure 2). 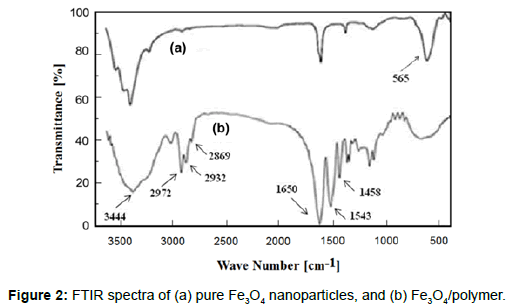 Samples were prepared for transmission electron microscopic (TEM) imaging by evaporating multiple drops of the clear dispersion onto a carbon-coated copper grid. The TEM images of the as-prepared citric acid-coated magnetite particles and Fe3O4/polymer are shown in Figure 3, indicating narrow distribution of particles between 8-10 nm. As visualized on the TEM images, the fF nanoparticles are welldispersed as individual particles with regular spherical shapes. Both the coated and uncoated iron oxide nanoparticles are uniform in shape and seem to have been monodispersed. Iron oxide and poly (NIPAAm- AAm-NVP) did not settle as separate entities; however, they did settle upon mixing.

The magnetic properties of the particles were determined using a vibrating sample magnetometer (VSM). A small amount of sample (powder) was weighed and placed on the probe; a magnetic field was then applied in a direction perpendicular to the sample surface. VSM testing was also done on the developed material. The saturation magnetization was found to be 23.14 and 4.33 emu/g for Fe3O4/VTES-fF and Fe3O4/ polymer, respectively (Figure 4). This difference suggests that a large number of polymers coated on the surface of the Fe3O4 nanoparticles. With a large saturation magnetization, the Fe3O4/polymer rapidly and easily separated from the reaction medium in the magnetic field. In addition, there was no hysteresis in the magnetization, and neither remanence nor coercivity was observed, suggesting the formation of superparamagnetic nanoparticles. 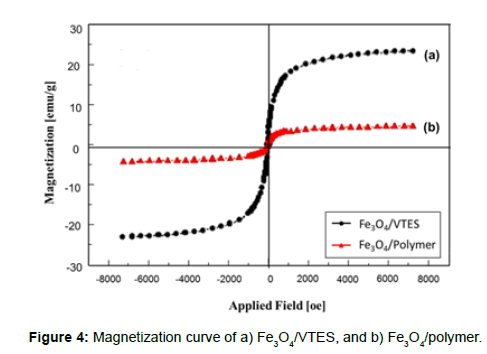 Thermogravimetric analyses (TGA) of Fe3O4/fF and Fe3O4/polymer were carried out on the dried samples with a heating rate of 10°C/min (from 20 to 600°C). All samples were dried in a vacuum oven at 60- 80°C prior to each TGA measurement to remove most of the water or solvent. The results of the TGA are shown in Figure 5. The weight loss increased above 195°C, which was attributed to loss of the citric acid; the weight loss for Fe3O4- CA was 10.3%. The TGA results for Fe3O4/polymer are shown in Figure 5(b); the first stage shows a weight loss of about 9.4% in the range of 90-110°C because of the removal of adsorbed physical and chemical water, while the second stage accounts for 75% of the remainder of the weight loss. The later-stage weight loss indicates the degradation of polymer on the surface of the MNPs. 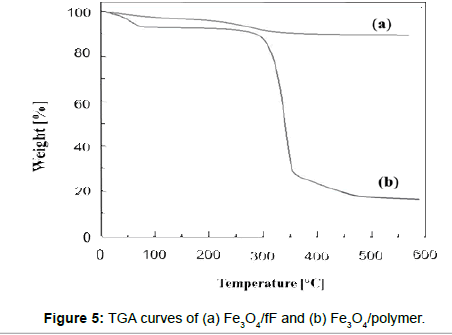 The optical transmittances of the aqueous solutions were measured at a wavelength of 551 nm using a UV-Vis spectrometer (UV-160, Shimadzu) with increasing solution temperatures. At each temperature, the samples were stabilized for 10 min before measurements were taken. When a polymer is said to have an LCST in an aqueous solution, it exhibits a specific phase below a specific temperature and experiences phase separation above this temperature. In other words, the polymer experiences a discontinuous phase change in water in the vicinity of the LCST. UV-Vis spectrophotometry was carried out to determine the LCST. The transmittance of UV-Vis light was measured as a function of temperature. At low temperatures, the solution was transparent and light transmittance was high; as the temperature rose, the polymer started to aggregate and phase separation occurred. Because of the unclear solution, the transmittance starting point of transmittance was low. Figure 6 shows an LCST of 1.25 g/l; 2.5 g/l of the aqueous solution of the Fe3O4/polymer was determined using the UV-Vis spectrophotometer and optical photographs of the Fe3O4/polymer. Moreover, as a visible thermoresponse, the optical colour of the smart polymer-encapsulated iron oxide nanoparticles in aqueous suspension experienced a dramatic change, transforming from a transparent sample to opaque ivory-white as the temperature increased from room temperature to 40°C, which is attributed to the thermosensitivity of the PNIPAA with the LCST. 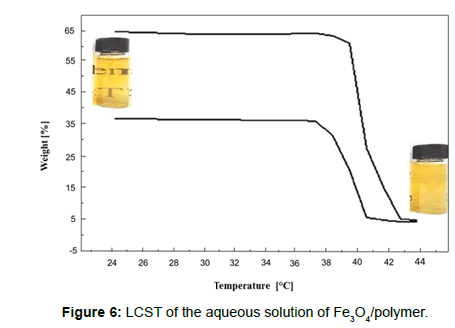 Magnetite (Fe3O4) ferroFluid was modified using vinyltriethoxysilane. Subsequently, NIPAAm, AAm and NVP were grafted onto the surface of modified-Fe3O4 nanoparticles by surface-initiated radical polymerization. The results indicate that the polymer chains were effectively grafted onto the surface of Fe3O4 ferroFluid. The functionalized particles remained dispersive and superparamagnetic and had thermal sensitivity with an LCST around 36-40°C. Therefore, it can be considered that thermosensitive polymers are intelligent polymers. Finally, because of the stability and thermosensitivity of Fe3O4/polymer, it is a good candidate for use in numerous biomedical research areas, including bioingestion, magnetophoretic control and bioimaging.

We are grateful for financial support from the Iranian Nanotechnology Initiative Council.