Copyright: © 2016 Yasir M, et al. This is an open-access article distributed under the terms of the Creative Commons Attribution License, which permits unrestricted use, distribution, and reproduction in any medium, provided the original author and source are credited.

A simple and sensitive HPLC method was developed and validated for the study of in-vitro drug release from haloperidol loaded solid lipid nanoparticles (SLNs). The method was also used for the analysis of drug for detection of shelf life of developed SLNs. Chromatogram separation was achieved using C18 column as stationary phase. The mobile phase consisted of 100 mM/L potassium dihydrogen phosphate–acetonitrile-TEA (10:90:0.1, v/v/v) and the pH was adjusted with o-phosphoric acid to 3.5. Flow rate of mobile phase was 2 ml/minute and eluents were monitored at 230 nm using UV/VIS detector. The method was validated for linearity, precision, accuracy, reproducibility, limit of detection (LOD) and limit of quantification (LOQ). Linearity for haloperidol was in the range of 1-60 μg/mL. The value of LOD and LOQ was found to be 0.045 and 0.135 μg/ml respectively. The drug loaded SLNs showed sustained drug release with maximum value of 95.52 ± 5.21% in 24 h. The shelf life of SLNs formulation was found to be 2.31 years at 4°C.

Haloperidol is an orally administered dopamine inverse agonist of the typical antipsychotic class of medications that chemically belongs to butyrophenone group [1]. Its mechanism of action is mediated by blockade of D2 dopamine receptors in brain [2]. It is used to treat certain psychiatric conditions including schizophrenia, maniac states, medicament induced psychosis and neurological disorders with hyperkinesias [3]. Haloperidol is chemically 4-[4-(4-chlorophenyl)-4- hydroxypiperidino] 4’-fluorobutyrophenone (Figure 1). The molecular formula of haloperidol is C21H23ClFNO2 and molecular weight is 375.86 g/mol. 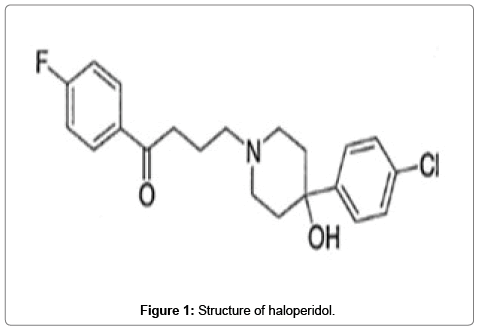 Author developed the solid lipid nano particles of haloperidol for nose to brain delivery (data are not given here and already published by same author). SLNs have the several advantages including targeted drug delivery and controlled release delivery, and increase bioavailability so as to reduce the dose and adverse effects associated with drug. SLNs offer an improvement to traditional nose-to-brain drug delivery since they are able to protect the encapsulated drug from biological and/or chemical degradation and may also increase nasal retention time due to an occlusive effect, good application properties, and adhesion of the SLNs to mucous membranes [4].

Various analytical techniques have been used for determination of haloperidol in pharmaceutical formulations. These include high performance thin-layer chromatography (HPTLC) [5], 19F NMR spectroscopy [6], square-wave adsorptive stripping voltammetry at a mercury electrode [7], square-wave and cyclic voltammetry at hanging mercury drop electrode [8], cyclic voltammetry at multiwalled carbon nanotubes-modified glassy carbon electrode [9]. Nonaqueous titrimetric method has also been developed for haloperidol determination [10]. Several UV spectrophotometric assay procedures have been developed and described in official compendia [11-13]. The literature survey revealed that haloperidol was quantitatively assayed in pharmaceutical preparations as well as in biological fluids either individually or in the presence of other drugs using HPLC (Table 1) but procedures related to detection of haloperidol in solid lipid nanoparticles are not published in literature till today. Author tried to reproduce the previously reported methods (Table 1) but due to unknown reasons none of them could reproduced. Hence, the aim of the research work was to develop and validate a new HPLC method for haloperidol. The different analytical performance parameters such as linearity, precision, accuracy, reproducibility, limit of detection (LOD) and limit of quantification (LOQ) were determined as per ICH Q2 (R1) guidelines [14,15]. The significance and relevance of this method was in vitro dissolution assessment of solid lipid nanoparticles. This method was also applied for quantification of haloperidol in solid lipid nanoparticles stored at different temperature and humidity conditions. For the obtained data, the shelf life of haloperidol was determined. Additionally, the method can be used for quantification of haloperidol in other type nanoparticles.

Drug and other chemicals

Potassium dihydrogen phosphate was purchased from Qualigens fine chemicals, Mumbai, India. Sodium hydroxide was procured from Fisher scientific, Mumbai, India. Acetonitrile (ACN), Triethylamine (TEA) and o-phosphoric acid were purchased from Sigma-Aldrich, (Millipore, Molsheim, France) water was used to prepare solutions wherever required and it was filtered before use through a 0.22 μm membrane filter.

Several methods have been developed for the determination of haloperidol in pharmaceutical preparation.

The concentration of haloperidol had been earlier determined by HPLC method using methanol-water (63:37, v/v) containing 0.2 M ammonium acetate as mobile phase and diphenylamine as internal standard [21]. The method used here was slightly modified in the terms of mobile phase. The mobile phase consisted of 100 mM/L potassium dihydrogen phosphate-acetonitrile-TEA (10:90:0.1, v/v/v) and the pH was adjusted with o-phosphoric acid to 3.5. It was sonicated for 15 min and filtered through 0.22 μm membrane filter. Flow rate of mobile phase was maintained at 2 mL/min and eluents were monitored at 230 nm. The samples were injected using a 20 μL HPLC injector. All determinations were performed at ambient temperature for a run time of 5 min [22].

HPLC method for Haloperidol was validated as per the ICH guidelines Q2 (R1) for linearity, precision, accuracy, repeatability, LOD and LOQ.

Linearity: The linearity of response for haloperidol was assessed in the range of 1-60 μg/mL for standard drug.

Accuracy as recovery: Accuracy was determined using standard addition method. The pre-analyzed samples were spiked with extra 50,100 and 150% of the standard haloperidol and the mixtures were analyzed by the proposed method. The experiment was performed in triplicate. The % recovery, % relative standard deviation (RSD), and standard error of mean (SEM) were calculated at each concentration level.

Precision: The precision was determined at two levels as per ICH, Q2 (R1) guidelines i.e., repeatability and intermediate precision.

Repeatability of drug sample was determined as intraday variation. Three replicates for each of the three concentrations were analyzed three times a day. Hence a minimum of 9 determinations were done covering the specified range for the procedure whereas intermediate precision was determined by interday variation (for three different days) for the determination of haloperidol at three different concentration levels of 4, 8 and 12 μg/mL in triplicate. The % relative standard deviation was calculated for absorbance to obtain the intraday and interday variation.

LOD and LOQ determination: LOD and LOQ of the drug were calculated using the standard deviation method with the help of following equations 1 and 2, respectively, as per ICH guidelines.

Where σ=standard deviation of the response; S=slope of the regression line.

Application of HPLC Method in in- vitro drug release study

The in vitro dissolution studies were carried out to evaluate the release of drug form optimized HP-SLN formulation and comparing it with the pure drug.

An accurate amount of freeze dried HP-SLNs and aqueous haloperidol suspension, each containing drug equivalent to 10 mg was transferred to a dialysis bag and sealed at both ends. The sealed bag was then suspended in a beaker containing 100 mL of dissolution medium (Phosphate buffer pH 7.4, corresponding to cerebrospinal fluid pH) and stirred at a constant speed at 37 ± 0.5°C. Aliquots were withdrawn at predetermined time intervals up to 24 h from receiver compartment (beaker) and replaced with an equal volume of fresh medium to maintain sink condition. The samples were analyzed by HPLC using the selected mobile phase. Comparison between release profile of drug suspension and optimized HP-SLN formulation was made by student’s t test at p< 0.05.

The shelf life of optimized HP-SLNs was determined by conventional method using Arrhenius equation. Optimized SLN formulations were kept at 25 ± 2ºC; 30 ± 2ºC and 40 ± 2ºC at ambient RH [24]. Samples were withdrawn after specified time intervals (0, 30, 90, and 180 days) and the drug content was determined using HPLC method. Amount of drug remaining was determined at each interval. Logarithm of percent drug remaining versus time (days) was plotted. The degradation rate constant ‘K’ was determined from the slope of the lines at each elevated temperature using the following equation (3).

Arrhenius Plot was constructed between log K and 1/T to determine the shelf life of optimized SLNs. By extrapolation method K value at 4ºC was determined. The shelf life (T 0.9) at 4°C was calculated with the help of following equation (4). 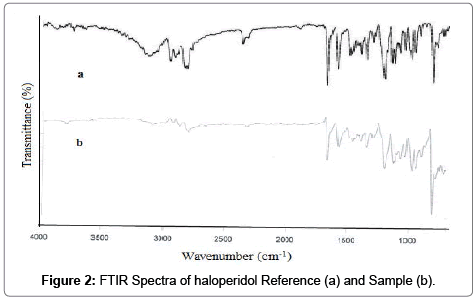 Figure 2: FTIR Spectra of haloperidol Reference (a) and Sample (b). 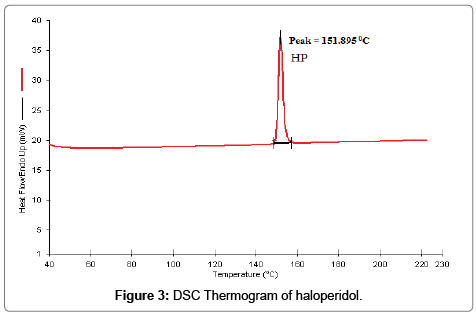 Calibration curve was constructed and a linear relationship was observed between peak area and concentration. The regression data for calibration curve showed a good linear relationship over concentration range of 1-60 μg/mL with respect to the peak area (Figure 4). The retention time of haloperidol was found to be 2.00 ± 0.12 min as shown in Figure 5. 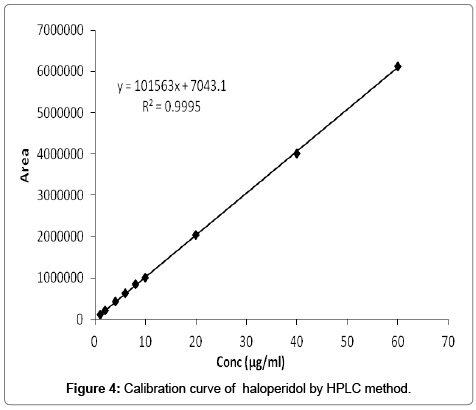 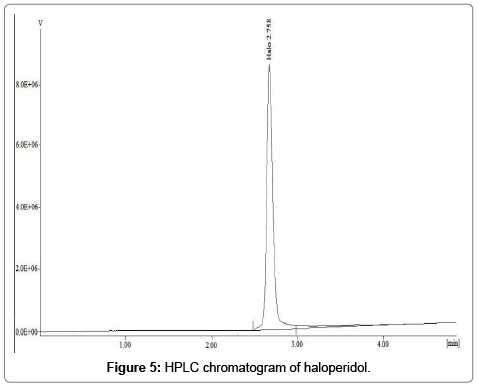 Using the optimized chromatographic conditions, the developed HPLC method was validated with respect to linearity, precision, accuracy, reproducibility, LOD and LOQ as per the ICH guidelines.

Accuracy as recovery studies: The proposed method afforded recovery of 99.55-100.42 % after spiking the additional standard drug solution to the previously analyzed test solution. The value of % recovery, % RSDs and SE are shown in Table 2, which indicated the accuracy of the proposed method.

Precision: The precision was assessed by analyzing haloperidol in three different concentration levels as 4, 8 and 12 μg/mL of in triplicate.

The results of repeatability (intraday precision) and intermediate (interday) precision were expressed in the terms of % RSD. The intraday and interday precision study of the developed method confirmed the adequate sample stability and method reliability where all RSDs were below 2% as shown in Table 3.

LOD and LOQ determination: LOD and LOQ of this method were determined by the standard deviation method. The value of LOD and LOQ were found to be 0.045 and 0.135 μg/mL, respectively, which indicated that the proposed method can be used for the detection and quantification of haloperidol even in very low concentration.

In- vitro release of haloperidol from HP-SLNs

The comparative in vitro drug release study was performed and the results are shown in Table 5 and Figure 6. 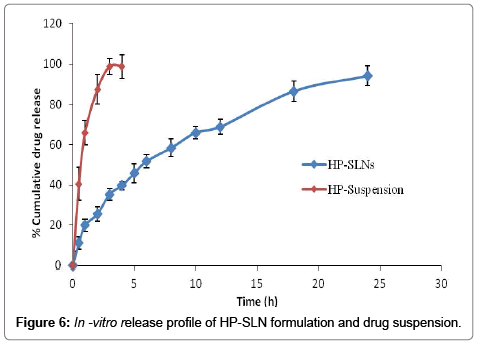 The dissolution profile from HP-SLNs indicated a biphasic behavior consisting of an initial burst release, followed by a phase of slow release. The initial burst release may be attributed to the presence of free drug in the external phase and drug adsorbed onto the surface of particles, while the slow release may be due to the drug encapsulated within the lipid matrix. The HP-SLNs showed initial burst release of 17.18 ± 3.42 %, whereas plain drug showed 70.32 ± 7.73 % drug release after 1 h. Thereafter, HP-SLNs showed sustained drug release with maximum value of 95.52 ± 5.21 % in 24 h, while aqueous drug suspension 98.81 ± 4.39 % drug release within 4 h. The observed results of HP-SLNs were compared with the drug suspension and it was found that a significance difference (p<0.05) was observed between drug suspension and HPSLN formulation after 4 h study.

The percentage drug remaining in the optimized formulation (HP-SLNs) when stored for 180 days at elevated temperatures of 25 ± 2ºC; 30 ± 2ºC; and 40 ± 2ºC at ambient RH was determined (Table 6). Logarithm of percent drug remaining versus time (days) was plotted (Figure 7a). The degradation rate constant ‘K’ was determined from the slope of the lines at each elevated temperature using the equation (4).

Arrhenius plot was constructed between log K and 1/T (Table 7 and Figure 7b). From the plot, K value at 4ºC (refrigerator temperature) was determined. The value of K4 was placed in equation (4.18) and shelf life was calculated. The shelf life of haloperidol in SLNs at 4ºC was found to be 2.31 years. The degradation kinetics of haloperidol in SLNs was also determined and it was found to be first order kinetics as shown in Figure 7a.

Authors are highly thankful to Management of I.T.S College of Pharmacy, Muradnagar, Ghaziabad, India for providing e-library facility during literature survey. Authors gratefully acknowledge the Name of Prof. S. Sadish Kumar (Principal, ITS College of Pharmacy, Muradnagar, Ghaziabad, India) and Mr. D.S. Jolly for their co-operation during the preparation of this review article.