Introduction: Maternal dietary diversity is a proxy indicator of maternal nutrient adequacy and improves health outcomes for both mothers and babies. Lack of dietary diversity is a severe problem in the developing world. Good nutrition during pregnancy is a fundamental determinant for growth and development of infants and mothers’ nutritional status.

Objective: The aim of this study is to assess dietary diversity and factors affecting it among pregnant women attending Antenatal Care in public health Centers, Addis Ababa.

Malnutrition is a universal problem that has many forms. It affects most of the world’s population at some point in their lifecycle, from infancy to old age. Maternal under nutrition is one of the most important causes of maternal morbidity and mortality particularly in the developing countries that has direct association with fetal nutrition [1, 2]. Both macro and micronutrient deficiencies for pregnant mothers, is a significant public health problem in many developing countries [1]. Multiple micronutrient deficiencies remain a major public health concern in low-income and middle-income countries (LMICs) which is mainly reflected among pregnant women in sub- Saharan Africa [1, 4]. Dietary diversity refers to an increase in the variety of foods across and within food groups capable of ensuring adequate intake of essential nutrients that can promote good health, and physical and mental development [3, 5]. The diet that is sufficiently diverse may reflect nutrient adequacy and the vulnerability is critical in children and pregnant and lactating mothers [3]. Diversified food during pregnancy is the very important since it is known to affect pregnancy and birth Outcomes and as a result, has broad impacts on economic and social development in developing country [4, 5]. Lack of dietary diversity is a severe problem in the developing world particularly to pregnant mothers that is a major predisposing factor for maternal morbidity and mortality [3, 6]. Further, the vulnerability is critical in children and lactating mothers because they require additional energy and nutritious foods for their physiological and mental development [5, 6]. Dietary diversity is usually measured either by adding the number of foods or, more often, by counting the number of food groups consumed over a reference period suggested that dietary diversity can be used as a proxy measure of food access at household level, while at individual level it is a reflection of dietary quality [5,6]. Similarly, micronutrient remains a major public health concern in developing countries due to intake of monotonous, predominantly starchy based diets that are lacking in diversity [6,7]. Different scientific researchers have demonstrated that adequate nutrient intake during pregnancy has a critical role in fetal development and wellbeing. Satisfactory nutrient intake during pregnancy will be found to reduce the risk for low birth weight by (19%), small-for-gestational-age births by (8%), and preterm birth by 16%, and infant mortality by 15% in those highly adhered to the regimen [8,9,10]. In Africa alone, 20% of women are underweight in relation to dietary diversity 800 pregnant women die every day during pregnancy(5,11). Dietary diversity score and early marriage were independent predictors of under nutrition in Africa [5, 11]. By other hand other studies on the dietary intake of pregnant women in Africa showing that dietary diversity status may be complicated by other factors including household socioeconomic status [12, 15]. Despite the enormous progress made in Ethiopia, the issue of food security and poor nutrition among women continues to be the country's main health and development concern. To improve women's nutritional status, the Ethiopian government established the National Nutrition Program and gave priority to interventions like "Promote maternal nutrition," which includes ensuring adequate intake of a variety of foods [8]. Even though the government has tried to put the strategy into practice, micronutrient deficiencies are a frequent cause of pregnancy-related issues. Anemia and multiple micronutrient deficiencies are present in approximately 22% of pregnant women and 17% of women of reproductive age, respectively, which is a sign of a serious public health issue [13, 14]. Additionally, food insecurity, ignorance of nutritious foods, taboos and myths, cultural customs, and gender discrimination are some of the most pervasive factors affecting pregnant women's diets and nutritional status [8, 9, 11, 16, 17, 18]. Although there is a lack of excellent prenatal and perinatal care, it is well known that pregnancy malnutrition is common and that the food in the nation is of poor quality. It is also poorly studied how different diets among pregnant women in Addis Abeba affect pregnancy-related issues [19, 20]. 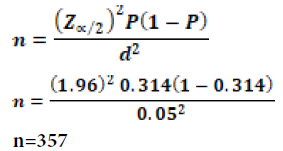 Dietary diversity was the outcome variable whereas, Socio Sociodemographic, Pregnant/behavioral and Obstetrical factors were predicting factors.

A pre-test was done on 5% of the total sample size at non selected health centers for its’ clarity, simplicity and understandability, In addition, the questionnaire was prepared in English and translated into Amharic and finally back to English by bilingual translators. The collected data were checked daily for completeness by investigators.

The collected data was checked, cleared, and entered into Epi Info 7.2 software, and transferred to SPSS version 25 for analysis. Descriptive analysis like mean and frequency were performed to describe dietary diversity. Bivariate and multivariable binary logistic regressions were carried out to assess factors of dietary diversity. Variables with a p-value less than 0.25 in the bivariate analysis was enter to a multivariable logistic regression analysis to identify the final associated factors of dietary diversity. Then Variables with a p-value < 0.05 at multivariate analysis was considered to be statistically significant and taken as showing association described with Adjusted Odds Ratio (AOR).

Demographic and Socio-economic Characteristics of Respondents

This study tried to assess the dietary diversity among ANC attending pregnant women of Addis Ababa Ethiopia. The finding was 47.23% of pregnant women had consumed less than 4 food groups out of ten groups and thus have low (inadequate) dietary diversity where as 52.77% have had a minimum dietary diversity (adequate dietary diversity), those who consumed 5 or above food groups. The prevalence of adequate diversity 52.77% in our study is lower than the study conducted in Kenya at referral hospital ANC attending mother [7] that have showed above 61% of pregnant women have had consumed six and above food groups or have had adequate dietary diversity. The difference could be due to difference in study area and socio-economic differences. On the other hand our finding (52.77%) is higher than the prevalence of adequate dietary diversity findings from the study conducted in Shashemene 25.4% (8), in Bale 44.8% (9) and in north east Ethiopia 31.4% (10). The difference could be due to difference in study area, period and socio-economic differences. This study was conducted in capital city of the country thus all study participants were urban dwellers while the study participants in countryside were at both small town and rural dwellers. In this study almost all of the respondents 98.6% were consumed starch food groups followed by pulse 88.4% and dark green 49% over the past 24 hours. There were also similar with the study in Bale showing 87.9% consumed starch food groups followed by 75% legumes and the study in shashemene stated that starch food groups were consumed by 95% of pregnant mother [8, 9]. The reason for similary of the finding might be indicate the abundant availability of the same food type in Ethiopia.

This study has some limitations. Food availability in the household might vary with the seasons which affect dietary diversity and the assessment of dietary intake depends on the 24-hour recall method, which may not accurately reflect their past feeding experience. Moreover, the nature of this study was a cross-sectional design, which does not show the cause and effect relationship. In addition, this study might not give the exact figure of the dietary diversity practice due to a recall bias and being self-reported.

The study received ethical clearance from the City Government of Addis Ababa Health Bureau Ethical Clearance Committee on June 1-30, 2022, with Ref. No. A/A/H/1041/338.

Before collecting individual data, participants provided written informed consent after a thorough explanation of the study's purpose and benefits. The research was carried out in the aftermath of the Helsinki Declaration.

The authors received no monetary compensation for their research, authorship, or publication of this article.

All of the authors have declared that they have no potential conflicts of interest in relation to the research, authorship, and/or publication of this article.

On reasonable request, the datasets used and/or analyzed during the study were made available by the corresponding author.

Neither the article nor any of its essential elements, such as tables and figures, have been or will be published elsewhere.

The authors thank all data collectors and pregnant women who took part in the study.

Copyright: © 2023 Tsegaye H, et al. This is an open-access article distributed under the terms of the Creative Commons Attribution License, which permits unrestricted use, distribution, and reproduction in any medium, provided the original author and source are credited.