MIT, Stanford University and University of California have recently made a research on atmosphere/energy program. The research group has made a plan and concluded that a renewable energy powered world indeed a possibility by 2050. They have analysed the future energy demand of 139 countries and compared the solar, wind and hydroelectric potential of the countries. The research team made an interactive global map which shows the projected energy mix on each of the analysed countries. The report of the map study shows that Pakistan has potential of producing 92% of its electricity requirements from solar energy, at a rate that’s amongst the highest in the world. Solar PV plants can produce 58.1% and concentrated solar plants (CSP) can produce 15% of electricity production. Study of the different solar potential co-ordinates of Pakistan is worth for forth coming planning to utilize solar potential properly and meet power demand of the country. This research is aimed to study the irradiation net power density (in MJ/m2/day and MWh/m2/year) of different co-ordinate of Pakistan. In parallel to study the install capacity of solar thermal and solar PV on district and provincial levels, study solar maps of Pakistan and different seasons on annual basis.

Fossil and nuclear sources are depleting gradually, renewable energy sources are ideal candidate for a global energy transition that must occur over this century [1-4]. Many problems such as environmental and social are also associated with fossil fuel and nuclear resources. Renewable energy has impact and restriction as the other energy sources has. The knowledge of these restriction is of the great importance to plan and formulate polices for sustainable energy. Wind and solar energy stands out for larger and possibly grids scale potential. Wind energy potential at contemporary charted out by state energy a sharp drop has seen in the installation costs, this helps to attract private sector toward investment in this realm. The wind potential is likely to remain significant only to coastal areas which are at far a distance from national grid only to tune of a couple of gigawatts. Solar energy is in abundance across all the coordinates of the country is justifiably seen as ultimate sources to tap. Solar energy also addresses the atmospheric pollution and climate issues. Over the years a number of states run organization in Pakistan initiated a number of solar energy projects at different mode of utilization but still failed to achieve remarkable contribution [4-6]. Efforts have been made to enhance the fabrication capability exists by state run National Institutes of Silicon Technology (NIST) remains at pilot scale. Water and Power Development Authority (WAPDA) of Pakistan ventured to install small scale power generation but remained fail to sustain it. The imported solar panels are available at exorbitant prices in open markets of Pakistan.

Concentrating solar power plant (CSPP) is one of the best solar technologies to convert Sun incident light into thermal potential to run turbines and generate power in an affordable way (Figures 1-12). Solar thermal technology helps to mitigate climate change as a well pass reduce the consumption of fossil fuels. Solar thermal technologies are being installed in many developed places such as Spain, Israel, USA and Greece and developing countries like India, Mexico, Egypt and Morocco (Tables 1-8). These technologies are as follows [6,7]: 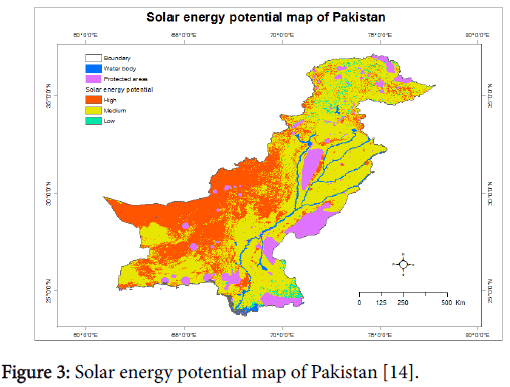 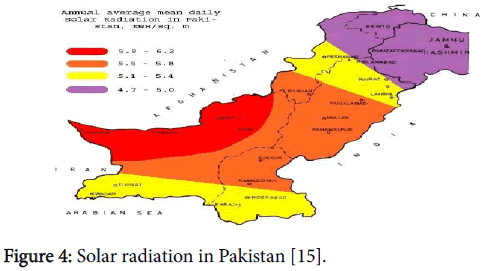 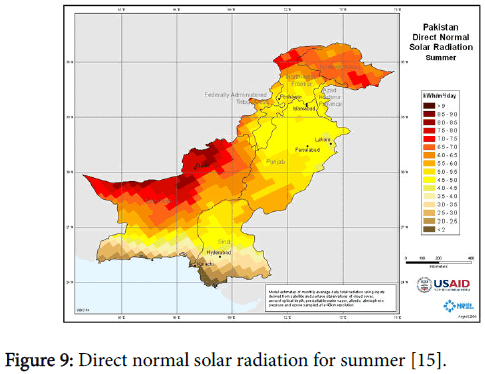 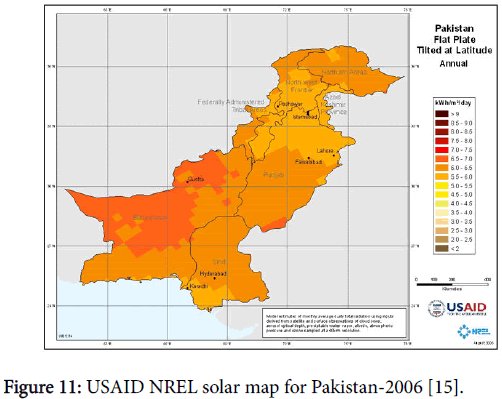 Table 3: Irradiation of capital cities of four provinces of Pakistan.

Pakistan has a potential of 2.334 million MW of electricity per year through photovoltaic and solar thermal system. To overcome the prevailing energy crises in the country, the industrialists should venture in this sector. At contemporary in Pakistan with the help of International Renewable Energy Agency (IREA) China and private sector are building solar power plant in Baluchistan, Kashmir, Punjab and Sindh.

Pakistan has inaugurated first ever on grid solar power plant on 29th May 2012 in Islamabad. It was a project that was specially granted by Japan International Cooperation Agency (JICA) under cool earth project, the project was titled “Introduction of cool energy by solar electricity generation system”. The project included the installation of 178.08 KW PV systems for Pakistan Engineering Council (PEC) and Planning Commission of Pakistan (P block). The planning commission and PEC combined generating capacity is 356.16 KW. This was the first on grade project in Pakistan. This project allows the recipients to sell the extra electricity by net-metering to the distribution company of Islamabad division Islamabad Electricity Supply Company (IESCO). The grant assistance of the project was 480 million Yuan, 553.63 million Pakistani Rupees. It took 3 years of time commencing from 2010 [12]. In Lahore, Beacon house canal side campus, first-ever installed solar PV system standard integrated capable of grid tie-in with the capacity of 10 KW. It was a pilot project designed by US consultants for BSS based upon feasibility by trade and development agency (USTAD) [13].

South western co-ordinates of Balochistan and Northern coordinates of Sindh are most favourable for harnessing solar incident energy. Pakistan has location in such an area where the solar irradiations are highest in its co-ordinates that is suitable for concentrated solar power (CSP) applications and photovoltaic (PV) systems. South Quetta valley and many parts of the central Punjab receive maximum solar energy (Figure 6).

The annual direct normal solar radiation for CSP of four provinces of Pakistan is as follow in Table 2 [16].

Monthly average solar irradiation of capitals cities of four provinces of Pakistan are as follows in Table 3 [16].

If the vast solar potential is properly utilized, it would be worth to produce electric power and supply electricity especially for the off grid communities of the southern and northern hilly areas of the country. As per report of Pakistan Energy Book for the year of 2004-2005, only 0.25% area of Balochistan province if use to generate solar power would be suitable to encounter the contemporary requirement of the country using devices having efficiency 20%.

• The average insulation of Pakistan is 5.5 kWh/m2/day.

To offer a simple, strong and assured tier structure, the amount of tiers must be kept checked. The specialists believe that, according to the solar irradiance profile of Pakistan, the ideal two tiered structure is following:

Existing tariff petitions: The only project company, Access Solar (Pvt) Limited, has filed a tariff petition for determination of solar tariff for its proposed power plant at Pind Dadan Khan, Punjab having capacity of 11.52 MW. The company will provide upfront solar tariff [16].

Capacity of the project of Phase III: 600 MW

Accomplishment of final phase of the project date: Dec 2016

Boundary wall of the project: 9 km

Qaid-i-Azam Solar Park estimated cost is US 1.5 billion dollars and its power generation capacity is 1000 MW. The life span of the plant is 25 years.

Pakistan power production capacity is 19,000 MW, but at contemporary much more power is needed to meet demand. Power projects are being set up at Thar to meet the power demand. After completion of the power projects and sufficient use of the solar potential Pakistan will stand in the list of top ten countries to produce more than 1,000 MW of solar energy.

• Pakistan lies in an area of “The world having greatest insulation”.

• The electricity generation rate is 2 cents/kWh in Japan.

• The provincial government of Sindh should be allowed by Government of Pakistan to research the feasibility of solar power. To make the seawater drinkable through solar energy the Government is planning to install a water filtration plant.

Copyright: ©2017 Muhammad F. This is an open-access article distributed under the terms of the Creative Commons Attribution License, which permits unrestricted use, distribution and reproduction in any medium, provided the original author and source are credited.