HDL plasma levels are associated with cardiovascular risk. Intense lifestyle modification may change HDL concentration. The aim of this article is to show the dissociation of HDL-C plasma levels and HDL functional characteristics induced by short-term exercise training, without any specific diet, in patients with the metabolic syndrome, highlighting the importance of evaluating the functional aspects of the lipoproteins besides their plasma levels.

The metabolism of high density lipoprotein (HDL) is extremely complex and often surprising. We know today that the cholesterol of high-density lipoprotein (HDL-C) plasma level is related to a large number of genetic polymorphisms, and that is influenced by different factors that also affect cardiovascular risk, such as smoking, obesity, diabetes, hypertriglyceridemia and some inflammatory diseases [1-3].

In addition to these factors, the levels of HDL-C may also vary geographically, such as in some countries, where the prevalence of low concentrations of HDL-C was observed in approximately 46% of the men [4].

HDL is an extremely heterogeneous mixture of lipoprotein particles, and this heterogeneity is probably caused by continuous changes between its various subfractions, or subpopulations, influenced by many plasma factors and as consequence these subfractions are very different structurally.

In addition, HDL particles can carry almost a hundred different proteins and enzymes, as evidenced by proteomic techniques, which are in constant motion, what provide the characteristics of the functional properties of these particles. Interesting to note that the functions of the majority of these associated proteins and enzymes are not known precisely and only part of them are directly related to lipid metabolism, the others are related to inhibition of proteases; complement regulation, acute phase response, among others [5].

The metabolic syndrome is a cluster of the most dangerous risk factors: diabetes and raised fasting plasma glucose, abdominal obesity, high cholesterol, high triglycerides and high blood pressure. According to guidelines from the National Heart, Lung, and Blood Institute (NHLBI) and the American Heart Association (AHA) [6], metabolic syndrome is diagnosed when a patient has at least 3 of 5 of the conditions shown in Table 1.

Table 1: Criteria for Clinical Diagnosis of the Metabolic Syndrome.

Low plasma levels of HDL-C are considered a pivotal feature of the MS. Apart from the association between low HDL-C levels and coronary artery disease, there has been increasing interest in characterizing the qualitative aspects of HDL and its relation to atherothrombosis, since the simple determination of plasma HDL-C has important intrinsic limitations to its static, mass-based measurement and because plasma concentration of HDL is influenced by many factors as gender, race, diet, and lifestyle [8,9].

Indeed, there is evidence that the normal anti-inflammatory HDL may become pro-inflammatory under certain conditions, and that HDL function may be more closely related to pathological states than its plasma levels [10,11].

Another evidence in favor of the importance of HDL function relates to apolipoprotein AI Milano (APOAI Milano). Despite having low levels of HDL-C, carriers of this single mutation have lower than expected incidence of coronary heart disease, Indeed, APOAI Milano has been shown to improve several HDL anti-atherogenic properties [12].

Among the several functions involved in preventing atherogenesis, HDL is known to promote the so-called reverse cholesterol transport. Cholesterol transported in HDL is taken-up by the liver via the selective uptake of HDL cholesteryl ester by scavenger receptor class B type I (SR-BI). HDL is constantly being remodeled by lipid transfers, which are essential for the role of the lipoprotein in cholesterol esterification and in reverse cholesterol transport. Moreover, lipid transfer process is determinant of HDL composition, which relates to the adhesion of proteins to the lipoprotein surface. These proteins, in turn, may be involved in other atheroprotective functions of HDL. For instance, HDL increases the resistance of LDL fraction to oxidation by the action of many enzymes, one of which is paraoxonase-1 (PON1) [13].

This enzyme is co-transported with APOA1 and decreases the oxidation of the LDL phospholipids [14]. Therefore, it is possible that the lipid transfer process influences not only the reverse cholesterol transport but also other HDL atheroprotective functions, such as the antioxidative action.

HDL-based therapies have been focused, for a long time, in raising plasma HDL-C levels. Sustained, long-term lifestyle changes, including diet, exercise and weight loss, are known to increase HDL-C concentration, which is thought to be an important mechanism to reduce the chance of cardiovascular events, especially in individuals with the MS.

In recent years, attention has expanded to how different therapeutic strategies affect HDL function, which might be as important as or even more relevant than HDL-C levels in modifying cardiovascular risk. Functional tests may more extensively clarify the status of HDL in respect to induction of or protection against atherosclerosis.

The assumption that the serum concentration of HDL-C depicts only partially the cardiovascular risk of this lipoprotein is supported by the recent results of our study showing the effects in the quantitative and qualitative aspects of HDL after a short-term aerobic exercise in patients with the MS [15].

In this study we analyzed the effects in the plasma concentration, composition and some functional characteristics of HDL from patients with the MS, comparing to healthy subjects, after a 3-times/week supervised and controlled training load (45 min/day) on a bicycle ergometer, during 3 months. The patients didn’t have any special diet and the exercise was considered of moderate intensity and compared to brisk walking.

The molecular composition of 5 HDL subfractions (HDL 2a,2b,3a,3b,3c), obtained after ultracentrifugation, was analyzed before and after the training, as well the antioxidative properties of the subfractions and the ability of HDL to accept lipids, analyzing the transference of radioactive labeled lipids from a lipid nanoemulsion that resembles LDL to HDL. 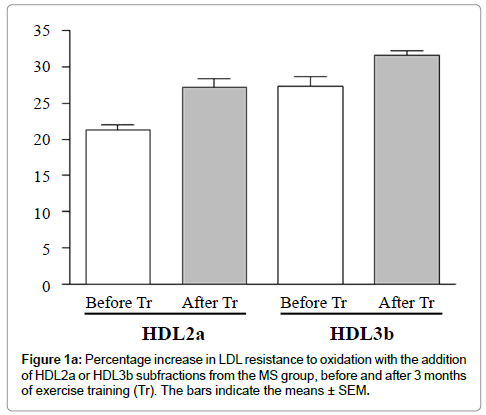 Figure 1a: Percentage increase in LDL resistance to oxidation with the addition of HDL2a or HDL3b subfractions from the MS group, before and after 3 months of exercise training (Tr). The bars indicate the means ± SEM. 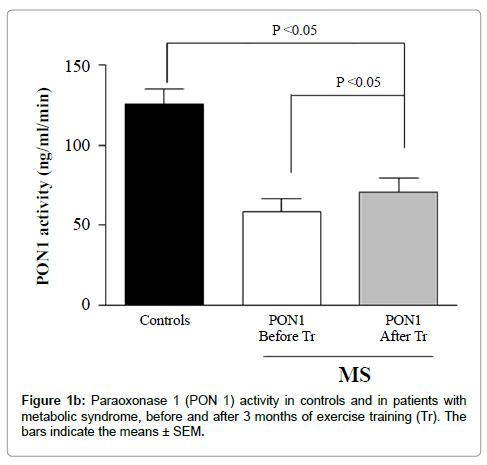 Figure 1b: Paraoxonase 1 (PON 1) activity in controls and in patients with metabolic syndrome, before and after 3 months of exercise training (Tr). The bars indicate the means ± SEM.

These effects were associated with no difference in the protein or phospholipid contents in all HDL subfractions but with a trend toward a decrease in free cholesterol in HDL3b and HDL3c.

Compared to the control subjects, MS group before the training period showed alterations in lipid transfer to HDL, characterized by decreased transfer of cholesteryl esters, triglycerides, and free cholesterol. The phospholipid transfer did not change. A trend was seen toward an increase in TG transfer after training in the MS group, although the final values were lower than those from the control group.

On the other hand, the present investigation adds relevant information, showing that, regardless of changes in plasma HDL-C levels, there is an improvement in HDL functional characteristics represented by the ability of HDL subfractions to inhibit LDL oxidation, and HDL capacity to accept free cholesterol and cholesteryl ester, promoted by short-term exercise per se (without specific diet) (Table 2).

Table 2: Percentage comparison of lipid transfer to HDL particles from MS patients, before (B) and after (A) Tr, to controls (C).

The effects of exercise training in correcting the alterations of lipid transfers and PON1 activity of the MS patients were remarkable, especially because HDL-C levels remained unchanged. As the transfer of free cholesterol and cholesteryl ester increased with training, PON1 activity also increased, possibly due to compositional changes more favorable to the enzyme function. Interestingly, the antioxidant activity of the HDL subfractions also increased an effect that also could be ascribed to the exercise-induced lipid transfer enhancement and to consequent compositional changes. Incidentally, post-training compositional changes were noted in HDL3b and HDL3c.

Our results are consistent with the findings by Roberts et al. [17], who demonstrated that intensive lifestyle modification, including dietary intervention with weight loss and a residential exercise program during 3 weeks, improves HDL anti-inflammatory properties in overweight/obese men.

However, it should be noted that the participants of our study did not receive any nutritional counseling, which implies that the results should be solely attributed to the increment in physical activity, with minimal or no influence by changes in food intake. Within this context, it is worthwhile to point out that, in real life, many patients do not follow the medical counseling of diet and exercise simultaneously.

All these findings indicate that the interference of nonpharmacological interventions on HDL metabolism goes beyond and are not accurately reflected by plasma HDL-C levels.

Nowadays, there is no consistent evidence that increasing only the concentration of HDL-C through drug reduces cardiovascular risk. Results of meta-analysis of large numbers of participants with risk of cardiovascular events suggest that, besides the quantity, the functional quality of HDL may be crucial in reducing cardiovascular risk [18].

Recently, in two large primary prevention cohorts, the authors observed that the smaller and denser HDL3-C levels are primarily responsible for the inverse association between HDL-C and incident CHD, highlighting the HDL biology to interpretations of clinical trials utilizing HDL-C therapeutics [19,20].

Accordingly, it has been advocated that therapeutic strategies involving HDL metabolism should address not only plasma levels of HDL-C, but also HDL quality. As HDL qualitative properties have been shown to better distinguish patients with coronary heart disease or equivalents from control subjects [9], it may be hypothesized that interventions that improve HDL function can be as atheroprotective as elevating HDL-C levels.

Probably the functionality of HDL particles is more important even than it’s mass, but this hypothesis remains to be confirmed in large randomized clinical trials

This investigation adds relevant information about the dissociation between quantitative and qualitative aspects of HDL, especially showing an improvement in HDL functional characteristics without changes in HDL-C levels after controlled aerobic exercise training without any specific nutritional counseling, highlighting the importance of evaluating the functional aspects of the lipoproteins besides their plasma levels.

Copyright: © 2017 Casella-Filho A, et al. This is an open-access article distributed under the terms of the Creative Commons Attribution License, which permits unrestricted use, distribution, and reproduction in any medium, provided the original author and source are credited.