A study pertaining to diurnal variations of water quality parameters were carried out in three different coastal ecosystems Mandapm jetty (MJ), Seagrass meadows (SG) and coral reef (CR) i.e. sites (site1, site 2 and site 3) of Gulf of Mannar (GoM) for the period 24 hours from the month of September 20 to 21, 2016. The various physicochemical parameters like water temperature, salinity, pH and dissolved oxygen of the different environments are the main factors to influence the water quality of the selected study sites. The water temperature (WT°C) varied from 28.44 to 32.30°C, salinity ranged between 35.89 to 40.28 ppt, pH measured as from 7.98 to 8.48 and dissolved oxygen varied from 3.72 to 8.58 mg/l respectively. The recorded value of chlorophyll a ranged between 0.36 to 1.32 mg/m3 from three sites during the study period. From the three different ecosystems, seagrass ecosystem constantly influences the variation of physicochemical parameters from other two ecosystems. The physicochemical variations of coastal region are including wide range of spatio-temporal variations in selected ecosystems (sites).

Water is importantly required for every living organism in this earth. Due to industrialization and urbanization, create deterioration of water quality and depletion of several aquatic animals [1]. Coastal area acts as a dynamic and productive ecosystem for human settlements, industries, and tourism [2]. Physicochemical characters are very important to monitor the water quality parameters and coastal water instability [3], considerable variations of physicochemical parameters affects the quality of water resources. The water and air temperature, turbidity, dissolved oxygen, salinity, hydrogen ion (pH) concentration, chlorides and total alkalinity are the important parameters used to determine the study of water quality. Indian estuaries and coastal water physicochemical parameters were analyzed by many researchers in earlier [4-7]. The fluctuation of physicochemical characters controls the entire aquatic ecosystems along the distribution of flora and fauna [5].

In Gulf of Mannar (GoM) comprise and supports several marine ecosystems i.e. coral reef, seagrass and mangrove ecosystem. In GoM coral reefs serve as spawning grounds for many fishes, seagrass meadows act as nursery grounds and mangroves give shelters, and thus form a unique component of life -support system for coastal biodiversity [8]. Coral reefs ecosystem along with the seagrass meadows, make this region is highly productive and it’s considered one of the most primitive ecosystem of the world [9,10]. Status of coral reef along with seagrass meadows and associate flora and fauna in GoM was studied earlier by several authors [11-14]. Coral reefs and seagrasses are the important part of the economy of many, often poor, coastal fisher folk, over thousand families of fishers live along the coastline of Gulf of Mannar and Palk Bay and the majority of them are directly depending on the coral reef associated fauna and flora for their livelihood [8]. Reported that seagrass ecosystems are more sensitive to impacts linked with human disturbance and are undergoing significant declines [15]. Mandapam is one of the important fish landing centers of the Tamil Nadu, with about 100 trawlers and large numbers of indigenous trawling boats operated from here [16]. The GoM coastline is known for its rich marine biodiversity especially intertidal biota and it’s extended to sub tidal area [17]. This seashore is highly protected area that declared by Gulf of Mannar Biosphere Reserve authority in 1989. Therefore, the present study reports that the spatial and temporal variations of the coastal water quality from the three different ecosystems in the Gulf of Mannar, southeast coast of India.

Gulf of Mannar (GoM) Marine National Park is located towards Ramanathpuram to Tuticorin, district of the state of Tamil Nadu. The park area is the core area of the GoM Marine Biosphere Reserve. It comprises of 21 coral reef islands along with several patches of seagrass meadows and shallow water habitat of unique marine biodiversity. The GoM receives rainfall from both southwest and northeast monsoons of India, irregular wind speed and ocean trends appeared in this regions and highest wind speed, turbulent ocean observed during the months of June to August. The study sites were selected based on its current pattern, topography and anthropogenic activity.

Mandapam jetty was considered as site 1 and this site may polluted by oils spills and fish processing industries, the pollution in and around the jetty area is due to the fisheries boat anchoring. Site 2 was considered as seagrass meadows at Pamban near Chinnapalam village seashore. Coral reef site as considered as site 3 in near site 2. On the other hand every one hour coastal water sample were collected (manual @ off-line method), and water quality parameters cross checked in all sites (coral reef, seagrass meadows and Mandapam jetty) throughout the study period. During the sample collection pre-cleaned polypropylene bucket used for collection of coastal water samples for the analysis of DO, salinity, conductivity by using YSI 2030 DO meter in-situ conditions, pH was analysed by using hand pH meter (EUTECH instrument model: Eco Testr pH 1). After in-situ analysis samples are immediately preserved and labeled for further laboratory analysis. In laboratory conditions dissolved oxygen (mg/l) estimated by modified Winkler’s method described by Strickland and Parsons (1972). Salinity (ppt) estimated by using titration method [18]. Chlorophyll a (mg/m3) was estimated the method followed by Strickland and Parsons [19]. Primary productivity estimated by light and dark bottle method adopted by Strickland and Parson and result expressed as mg/cm/hr.

All collected data analysed and interpreted in SPSS 20.0. Analysis of Variance (ANOVA) used to compare all physicochemical parameters to one another between the sites; ANOVA was followed by Tukey’s post hoc test used to test multiple comparisons of sites for different physicochemical parameters in Table 1. The maximum, minimum and average values of WT, salinity, pH and DO were extracted from data obtained during the deployment period. The WT, salinity, pH and DO fluctuation was calculated as the average difference from the lowest value and highest value of data during the study period. Deployment data indicates strong diel variability appears between the parameters and sites. All quality control procedures are followed during the deployment and data collection. The instruments were pre-calibrated using NIST traceable standards and certified reference materials (CRM) before and after deployment.

In the present study water temperature ranged from 28.44 to 32.30°C in all study sites during the study period. In site 1 (Mandapam fishing jetty) WT may varied from 30.15 to 31.44°C, mean ± SD (30.61 ± 0.43, n=96). Compared to other study sites, site 2 (seagrass meadows) recorded highest range of WT from 28.44 to 31.67°C (29.87 ± 3.24, n=96) and site 3 showed 30.80 to 32.30°C (31.44 ± 0.37, n=96) respectively in Table 2 and Figure 1. ANOVA result showed significant variation between the sites (F=124.61, P<0.05 level). In site 2 coral reefs are well known temperature sensitive [20,21], geographical variation of coral reef temperature tolerance proved by [22]. Water temperature is an important hydrological parameter, which influence almost every chemical and biological interaction in water [23]. The GoM surface water temperature increase from the month of January until it reaches maximum in April, slightly fall in June and again rose towards August from then gradually falls to minimum in December. Water temperature variations influenced by the air temperature, humidity, wind action, tides, and solar energy. 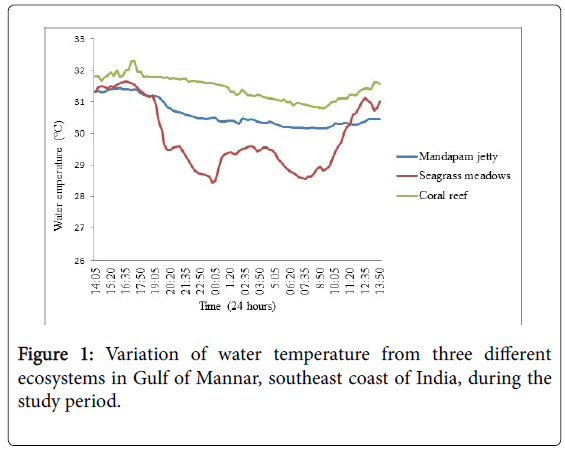 Figure 1: Variation of water temperature from three different ecosystems in Gulf of Mannar, southeast coast of India, during the study period.

The salinity was fluctuated between 35.89 to 40.28 ppt in all sites in the GoM. Highest range of salinity was recorded in site 2 when compared to the other study sites, site 2 showed that 39.24 to 40.28 ppt, mean ± SD (39.74 ± 0.30, n=96) because of unusual water temperature was present in the site 2 it may influence the salinity of this site during the study period. In site 1 and site 3 salinity ranged between 38.56 to 38.79 (38.70 ± 0.06, n=96) and 35.89 to 35.99 (35.96 ± 0.02, n=96) respectively in Table 2. Due to the presence of water temperature fluctuation and coral reef-zooxanthallae association create less salinity in coral reef ecosystem as site 1 in Figure 2. [24]. A relationship between on-line and off-line coastal water sample results showed in Figure 3. ANOVA results shows that there is a significant variation between the sites during the study period (F=11328.60, P<0.05 level; Figure 2). The salinity acts as a limiting factor, for distribution of living organisms, and it causes dilution and evaporation, it may influence the fauna of the intertidal zone [25].

Table 2: Variation of physicochemical parameters from three different ecosystems in Gulf of Mannar. Figure 2: Variation of salinity (ppt) from three different ecosystems in Gulf of Mannar, southeast coast of India, during the study period. 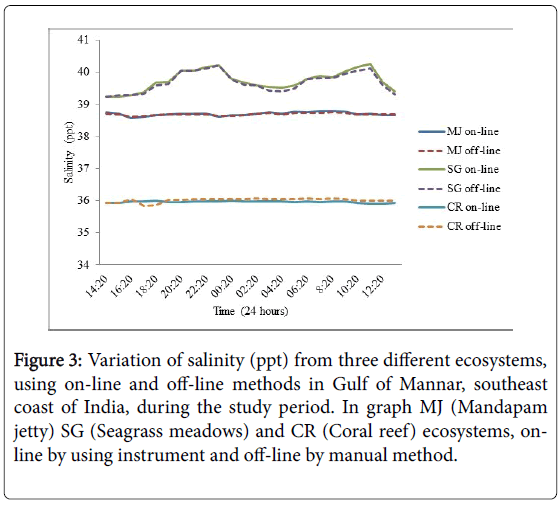 Figure 4: Variation of pH from three different ecosystems in Gulf of Mannar, southeast coast of India, during the study period.

Assessment of manual off-line and on-line coastal sample results showed in Figure 5. Based on Abowei (2010) report, pH values recorded (7.98 to 8.48) in this study were well within the preferred pH levels (7.0 to 8.5) for biological productivity in the ecosystems. Seagrass like macrophytes grows in the shallow coastal regions are characterized by metabolic activity and modify the pH within their limits [29]. For example, in Mediterranean Sea Posidonia oceanica seagrass meadows change or modify the pH in seawater column as much as 0.2–0.7 pH units diurnally, via photosynthetic activity and community metabolism [30-32]. 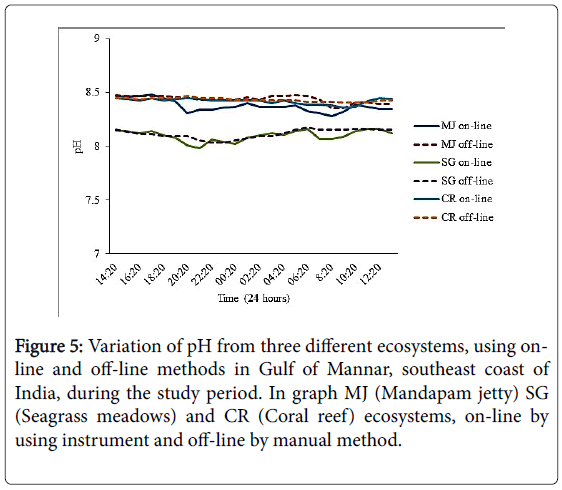 During the study period the highest concentration of Dissolved oxygen (8.58 mg l-1) and lowest (3.72 mg l-1) was recorded in the site 2, mean ± SD (5.67 ± 1.42, n=96) when compared to the other study sites. In site 1, DO ranged between 6.75 to 8.30 mg l-1 (7.49 ± 0.35, n=96) and site 3 represent 5.34 to 6.83 mg l-1 (6.03 ± 0.41, n=96) respectively in Table 2 and Figure 6. Variation of on-line and off-line coastal water sample results showed in Figure 7. Monitoring of OD, provide water quality in coastal ecosystems and used as a tools of integrity in ecosystems [33]. Dissolved Oxygen is directly influenced by the water turbulence, surface diffusion, photosynthesis rate, Biological Oxygen demand, water temperature, and carbon dioxide concentration. Due to the presence of phytoplankton bloom were appeared in site 2 (seagrass meadows site) might be responsible for the DO fluctuations (difference ± SD; 4.86 ± 1.42) during the study period commonly occurred in high temperature, high salinity environment [34] temperature, salinity may influence the DO concentration in coastal waters [35]. The relationship between the water temperature and dissolved oxygen is inversed natural process, because warmer water more saturated with oxygen and it can holds less dissolve oxygen [36]. Statistically ANOVA result shows that there was a significant variation among sites in entire study period (F=116.87, P<0.05 level). 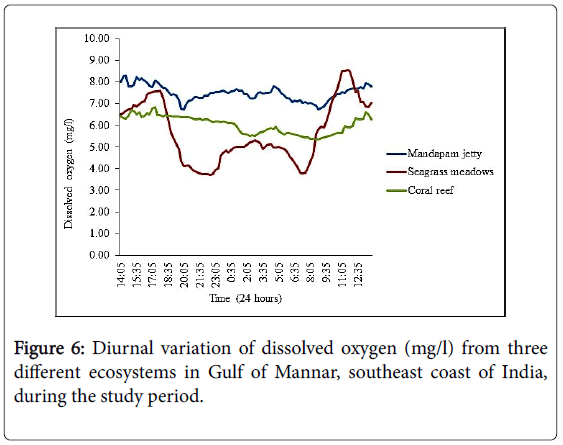 Figure 6: Diurnal variation of dissolved oxygen (mg/l) from three different ecosystems in Gulf of Mannar, southeast coast of India, during the study period. 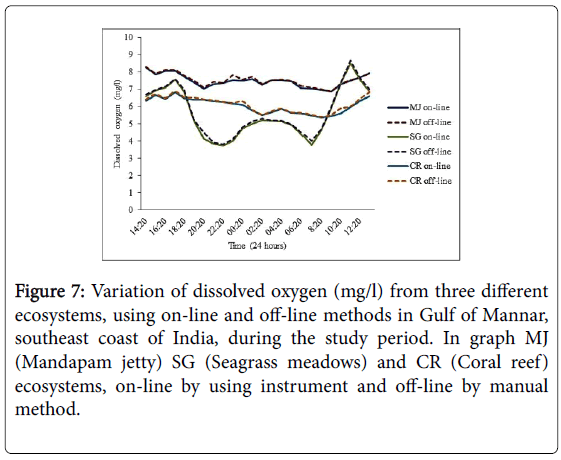 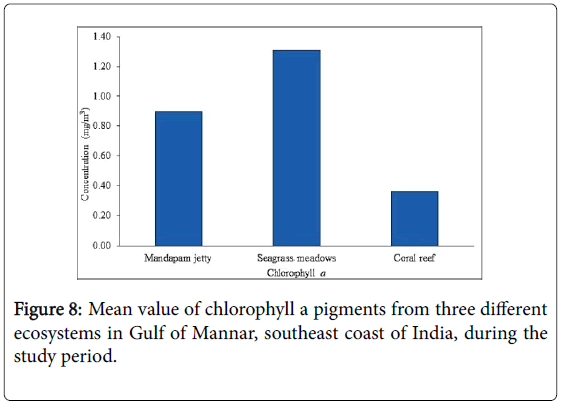 Figure 8: Mean value of chlorophyll a pigments from three different ecosystems in Gulf of Mannar, southeast coast of India, during the study period.

The present study concludes the spatial and temporal variations of several environmental characteristics of three different ecosystems in the Gulf of Mannar which suffered different scale of disturbance. The present baseline information of the physicochemical parameters in coastal water would form a useful tool for further assessment and monitoring of these coastal ecosystems. Among the three ecosystems, seagrass meadows ecosystem showed higher difference value of water temperature, salinity, dissolved oxygen and presence of high concentration of chlorophyll a , than the other ecosystems. Overall, from this study observed that site 2 (seagrass meadows ecosystem) constantly influences the variation of physicochemical parameters from other two sites.

The authors would like to thanks the Ministry of Earth Sciences, Government of India for financial support of the work. The authors also acknowledge to Dr. M. A. Atmanand, Director, National Institute of Ocean Technology, Chennai, India. Dr. M. V. Ramana Murthy, Scientist-G (Group Head) and Dr. Sivakholundu former Group Head, Coastal Environmental Engineering Division, National Institute of Ocean Technology, Chennai, India. We extended gratitude to other team members in our division and Tamil Nadu Forest department officials for their encouragement and constant support to complete this work.

Copyright: ©2018 Sundararajan S. et al. This is an open-access article distributed under the terms of the Creative Commons Attribution License, which permits unrestricted use, distribution, and reproduction in any medium, provided the original author and source are credited.