Doppler Indices of the Umbilical and Fetal Middle cerebral Arteries during Normal Singleton Pregnancies in a Black African Women Population: A pilot Study

Doppler Indices of the Umbilical and Fetal Middle cerebral Arteries during Normal Singleton Pregnancies in a Black African Women Population: A pilot Study

Background: Doppler ultrasound velocimetry of fetal and uterine vessels is a well-established method of prenatal monitoring.

Objective: To establish the reference values of the Doppler indices of the fetal middle cerebral artery (MCA) and umbilical artery (UA) and of the cerebroplacental ratio (CPR) in the Togolese context.

Materials and methods: Prospective, observational and analytical monocentric study conducted in the radiology and gyneco-obstetrics departments of the regional hospital of Atakpame (Togo) from April 1 to August 31, 2021. A total of 210 pregnant women between 21 to 39 weeks of gestation were included for the study.

Conclusion: These results can be used as a reference in our hospitals while waiting for their validation in a multicentre study for a generalization of the results to the whole Togolese population.

For several years, policies to improve maternal and perinatal health indicators have been developed based on the intensification of pregnancy monitoring. Pregnancy surveillance is based on multiple screening procedures (questioning, clinical examination and complementary examinations). Among the complementary examinations, we can mention the Doppler ultrasound Obstetrical Doppler ultrasound is one of the “new” examinations that have become widely used in the last twenty years. Doppler ultrasound velocimetry of fetal and uterine vessels is a well-established method of prenatal monitoring. Aspects of the Doppler wave, reflecting circulatory changes, can be used to predict adverse perinatal outcomes.

Umbilical arterial Doppler assesses placental resistance and the quality of fetal-maternal exchange [1]. Given its technical simplicity, non-invasiveness, and low cost, umbilical arterial Doppler would be an ideal monitoring test for fetal well-being provided it has sufficient predictive value and, above all, leads to improved health. The same applies to the measurement of the cerebral arteries, which improves the diagnostic value of fetal suffering in high-risk populations [2]. The combination of the Doppler indices of the middle cerebral artery (MCA) with that of the umbilical artery (UA) by the ratio of their resistance indices, also known as the Cerebro-placental ratio (CPR), is a useful tool for monitoring fetal health [2].

Although reference charts for these Doppler indices are available in the Western literature, there are few such studies in the black African population in general and in Togo in particular. As a result, Western standards are used that are not always superimposed on those of Black African women. Indeed, studies have shown a significant influence of racial origin on obstetrical Doppler indices [3]. The objective of the present study was to calculate the reference values of the pulsatility index (PI), resistance index (RI) of MCA and UA, and to calculate the CPR in a population of normally developing gestating women, with the idea of forming a future reference base for obstetrical Doppler indices in the Togolese context.

Nature, setting and period of the study

This was a prospective, observational and analytical monocentric study conducted in the radiology and gyneco-obstetrics departments of the regional hospital centre of Atakpame from April 1 to August 31, 2021 (5 months). The Atakpame Regional Hospital Centre is the reference centre for the « Plateaux » health region of Togo. The study received approval from the institutional ethics committee. Informed consent was obtained from each pregnant woman. The study population included all pregnant women received in the two services during the study period.

A total of 210 pregnant women were included for the study.

Techniques for measuring RI and PI of MCA and UA, conduct of the study

We used a General Electric Healthcare Logic E ultrasound machine. The convex probe (4C) was used for the examinations. The pregnant woman was in dorsal recumbency, with the examiner positioned laterally. After a morphological ultrasound of the fetus, colour Doppler mode was used to locate the artery. Pulsed-wave Doppler was then applied to record at least three waves. The angle of insonation was kept to less than 20°, the sample gate was 2 mm, and the pulse repetition frequency was set at 3.6 kHz. Measurement on the middle cerebral artery was performed on an axial slice at the level of the polygon of Willis, which is composed of vessels communicating with the internal carotid and basilar arteries (Figure 1). The measurement site for the umbilical artery was on a floating loop of the umbilical cord (Figure 2). The examinations were performed by a single radiologist with more than 10 years of experience. The parameters analysed were: pic of systolic velocity (PSV), end-diastolic velocity (EDV), pulsatility index (PI), resistance index (RI) of the middle cerebral and umbilical arteries, and cerebroplacental index. PSV, EDV, PI, and RI were obtained automatically by the machine after measurement, and the cerebroplacental ratio was calculated by the ratio of the RI of the middle fetal cerebral artery and umbilical artery. 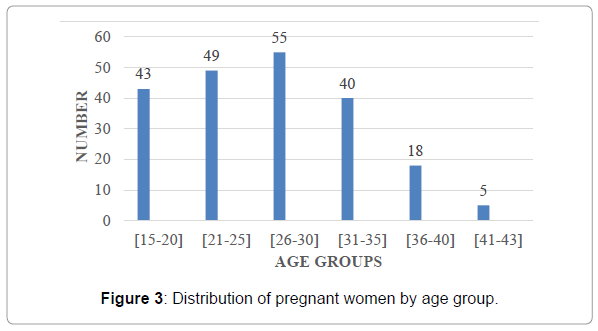 Nulliparous and primiparous were the most represented with 63 pregnant (30%) and 58 pregnant (27.6%) respectively according to (Table 1). The average parity of the study population was 1.54±1.46.

There was a weak positive linear correlation between MCA’s PSV and gestational age (r=0.28; p<10-5). The PSV grew from 23.32 cm/s to 56.13 cm/s with an overall mean of 45.4 cm/s (Table 2). MCA’s EDV varied with gestational age with a statistically significant relationship (p=0.02) but this correlation was not linear (r=0.07). The calculation of the RI and PI of the MCA did not show a statistically significant relationship with the gestational age. The mean RI and PI were 0.80 and 2.03, respectively In (Figure 4). Trend line analysis of the mean PI and RI values showed two phases of the curve. A first phase increasing from 21 weeks to 28 weeks with a peak between 28 and 30 weeks and a second phase decreasing from 30 weeks.

Table 2: Description of mean value of PSV, EDV, RI and PI of the fetal MCA according to gestational age. Figure 4: Trend lines of mean value of PI, RI, and CPR of MCA and UA according to gestational age.

Table 3: Description of the mean value of PSV, EDV, RI, and PI of the UA according to gestational age.

Table 4 describes the ratio of RI from the MCA and the UA (CPR). There was a statistically significant relationship between CPR and gestational age (p<10-5) with a weak positive linear correlation (r=0.15).

Doppler velocimetry of the uteroplacental, umbilical, and fetal vessels is the best predictor of perinatal morbidity than other fetal monitoring methods [4]. It provides the clinician with important information about the hemodynamic of the vascular site being studied. Doppler can be used to monitor physiologic hemodynamic changes in uteroplacental and fetal vessels during gestation, and to measure circulatory disturbances in certain pathologic conditions [5]. Doppler velocimetry allows the measurement of hemodynamic flow of the major fetal vessels, comparing these flow indices with normal aspects.

Middle cerebral artery Doppler evaluation is a method of fetal assessment that identifies at-risk foetuses in high-risk pregnancies. This assessment of the cerebral arteries has a high diagnostic value for fetal distress in a very high risk population. In chronic fetal hypoxia, the fetus preserves the perfusion of its noble organs and primarily of its brain [6, 7]. This adaptive vasodilation results in an abnormal increase in cerebral arterial diastolic flow. In this study, the PSV of the MCA increased with gestational age, ranging from 23.32 cm/s to 56.13 cm/s with an overall mean of 45.4 cm/s. This result is similar to previous studies. In the series by Figueira et al., the PSV ranged from 21.71 cm/s to 55.22 cm/s [8]. Saksiriwuttho et al. found that the PSV of the MCA ranged from 24.34 cm/s at 20 weeks to 59.04 cm/s at 37 weeks [9]. Ehigiamusoe et al. found a mean of 40.1 cm/s in their study [10]. In this study, the calculation of RI and PI of the MCA did not show a statistically significant relationship with pregnancy age. The mean RI and PI were 0.80 and 2.03, respectively. Ehigiamusoe et al [10]. Found lower indices of 0.70 and 1.14. Indeed, the RI and PI values of the MCA change throughout a normal pregnancy. A trend line analysis of the PI and RI averages showed two phases of the curve. A first increasing phase from week 21 to week 28 with a peak between 28 and 30 weeks and then a second decreasing phase from week 30 other authors have shown a parabolic curve for these indices with a plateau between 28 and 30 weeks [11-13]. These observed differences can be explained by the use of different statistical methods, the model of analysis of the curves, differences in sample size and experience in Doppler ultrasound of the sonographers.

The umbilical Doppler measures the blood flow in one or both umbilical arteries. It thus provides information on the quality of exchanges between the fetus and the mother via the placenta. The data from the umbilical Doppler allows for the monitoring of the proper growth of the fetus. It is therefore usually performed in cases of intrauterine growth restriction or in pregnant women at risk [14-16]. An abnormally high PVS and RI is considered pathological [17]. In our study, the PSV of the UA ranged from 33.19 cm/s to 53.75 cm/s with an overall mean of 45.9 cm/s. Igbinedion et al, had found an average of 41.7 cm/s [18]. The calculation of RI and PI of the UA showed a negative linear correlation with gestational age with a statistically significant relationship. RI decreased from 0.72 to 0.57 with an overall mean of 0.65, whereas PI decreased from 1.36 to 0.81 with an overall mean of 1.05. Igbinedion et al. found a mean of 0.57 for RI and 0.98 for PI [18]. Srikumar et al had made the same finding where RI and PI decreased with gestational age [11]. In the series of Ayoola et al, RI and PI decreased from 0.76 to 0.58 and from 1.26 to 0.83 respectively [19]. Other authors have also found similar results [20-22].

The Cerebro-placental ratio (CPR) is the ratio of the Doppler indices between the middle cerebral artery and the umbilical artery. It may be of interest to RI or PI. It is a better indicator of the fetoplacental circulation than the RI or PI of the MCA taken alone in the evaluation of prenatal and perinatal complications [11, 23]. It reflects the status of cardiac output redistribution to the cerebral circulation, which improves accuracy in predicting adverse outcomes. It allows assessment of fetal hypoxia [24]. Low CPR is associated with adverse perinatal outcome in single term pregnancies [25]. CPR is highly variable during pregnancy. In our study, we used the RI ratio. The CPR ranged from 1.11 to 1.43 with a mean of 1.28. Di Mascio et al had found a mean of 1.35. There was a statistically significant relationship between CPR and gestational age with a weak positive linear correlation. Other authors used the ratio of PIs and were able to show a strong positive correlation of CPR with gestational age up to 30 weeks of gestation followed by a strong negative correlation thereafter up to 40 weeks of gestation [11, 22].

Strengths and limitations of the study

Our study is the very first of its kind in our country that has established reference values for the different Doppler indices of the fetal middle cerebral and umbilical arteries and the calculation of the cerebroplacental ratio for the different gestational ages.

The main limitation of our study was the relatively small number of personnel for each gestational age to allow meaningful derivation of the indices. Assessment of the reproducibility of the measurements was not performed because of the lack of qualified sonographers in these Doppler examinations.

Copyright: © 2021 Gbande P, et al. This is an open-access article distributed under the terms of the Creative Commons Attribution License, which permits unrestricted use, distribution, and reproduction in any medium, provided the original author and source are credited.