The effects of chemical treatments on the structure, some tensile properties and dyeing of polyethylene terephthalate fiber have been studied. Polyethylene terephthalate (PET) fibers were isothermally treated at room temperature with trichloroethylene (TCE) for 30, 60, 300, 600, 900 and 1800 s respectively. The treatment was found to influence the morphology and properties of the polymer to an extent which depends not only on the time of treatment but also on the nature of the liquid and the forces of interaction in the PET: liquid pair being considered. The XRD and tensile properties are used to complement the dyeing results. The dyeing of treated and untreated polyester fibers in trichloroethylene at 40ºC and 60ºC compared to aqueous dyeing at 80ºC was carried out. An improvement in the dye uptake observed in the solvent dyeing compared to the aqueous one was found to be temperature dependent. The low energy required for non-aqueous dyeing is an indication of it usage as a better option to the normal aqueous dyeing that requires high energy consumption.

The conventional dyeing of most textile substrates is an energy intensive operation requiring the heating of significant dye bath volumes for extended periods of time to attain sufficient penetration of the dyestuff into the fiber structure. This is true of polyaramid fibers, which are particularly difficult to dye because of their high glass transition temperatures. Dyes are intensely colored substances that can be used to produce a significant degree of coloration when dispersed in or react with other materials by a process that at least temporarily destroys the crystal structure of the substrate [1]. They are retained in the substrate by adsorption solution and mechanical retention or by ionic or covalent bonds. The use of organic solvents as dye bath media became a quite popular concept when it was realized that fresh water availability and wastewater disposal would be a significant and expensive problem for the textile industry. Organic solvent dyeing is an energy saving process because solvents usually have a much lower heat of evaporation than water and can be completely recycled by means of standard recovery operations thus eliminating costly drying after aqueous dyeing as well as potential water pollution problems. The dyeing of polyester substrates from solvents using dyestuffs that are conventionally used as disperse dyes in aqueous dyeing has received particularly close attention. Exhaust dyeing of polyester from organic solvents has been critically reviewed by [2]. Who pointed out that the considerable problems with exhaust dyeing of disperse dyes from perchloroethylene is mainly associated with the unfavorable partition coefficient. The same author reported further that a successful solvent dyeing will require the synthesis of new dye systems having low solubility in organic solvents and a good affinity for the fiber so as to provide adequate distribution coefficients for good dye exhaustion levels.

Weigmann et al. [3] and Knox et al. [4] reported that pretreatment of polyester yarns with strong interacting solvents would lead to modification of fiber structure which would permit rapid diffusion of “high energy” disperse dyes under atmospheric conditions without the use of carriers. The solvents caused swelling in the polyester and produces polymer crystallites by recrystallization which stabilize the polymer structure by preventing its complete collapse upon subsequent solvent removal and due to this; more micro voids, crack etc are created in the polymer structure which enhance the dye uptake. Dye carriers may be needed for complete dye penetration of polyester fibers in aqueous dyeing. Carriers cause the glass-transition temperature, Tg of the polymer to become lower and allow the penetration of waterinsoluble dyes into the fiber. It is difficult for dye solutions in water to penetrate synthetic fibers such as polyester, cellulose triacetate, polyamides and polyacrylics that are somewhat hydrophobic. Disperse dyes commonly used to dye polyester are nonionic and made use of a diffusion mechanism. Prolonged boiling of the dye bath loosens the forces binding the polymer chains to each other causing the fiber to swell which allows a limited penetration of the fiber surface by the dye. The rate of absorption or diffusion of disperse dyes in polyester is much lower than that on nylon or cellulose triacetate. Many substances show carrier behavior and some have found more acceptance than others for various reasons such as availability, cost, environmental concern, ease of handling, odour etc. Most carriers are aromatic compounds and have similar solubility parameters to the PET fibers and to some disperse dyes. The rate of diffusion of disperse dyes into fibers is very low unless special measures are taken. An accelerating effect can be realized by the use of temperature above 100oC or the addition of carrier such as hydrocarbon, phenols, primary amines and esters to the dyeing system but due to numerous actions of carrier, no clear explanation has yet been accepted as to their effect. Their main effect has been assigned to the increased solubility of the dyestuff, either in the dyeing medium or in the carrier itself while others have assigned it to the swelling of the fibers and increased segmental motion of the polymer molecules [5]. Several research works have been reported for the dyeing of 100% polyester or polyester/cotton blend. [6]. worked on the dyeing of polyester/cotton fabrics using disperse/reactive dyestuff in one-bath dyeing process after coating the fabrics with chitin biopolymer and then dyed with sulphato ethyl sulphonyl disperse/reactive dyes. [7]. developed a new approach to dyeing 80:20 polyester/cotton blended fabric using disperse and reactive dyes. [8]. also reported the dye ability improvement of polyester pretreated with some alkoxides while [9]. Studied the solvent induced structural modifications of poly (ethylene terephthalate) filaments. The aim of this research work is to determine the level of disperse dye uptake by polyester fabric in a non-aqueous solvents at different dyeing temperatures.

The polyester fiber was purified by the methods described by [10]. Where a continuous multifilament polyester yarn used for this research work was Soxhlet extracted with benzene for 24 h to remove the oligomers and the surface finish. The extracted fiber was washed with acetone and then with water at room temperature to make it free from residual solvent. It was dried at 65-75°C under vacuum for 10 h at 65% relative humidity and 25°C. The disperse dyestuff was Disperse Blue 1 (Figure 1) 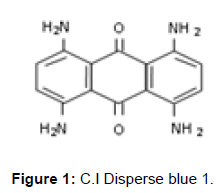 The dyeing of control and solvent treated PET fibers was carried out for each of the samples using Roaches (MB model) dyeing machine. The dyeing of the solvent treated filaments was carried out in succession using different dye baths. The dyeing of the previous solvent treated PET filaments was carried out in trichloroethylene at a dyeing temperature (Td) of 40°C, 60°C and in aqueous solution for 1 hr. at liquor ratio of 100:1. After the dyeing, the dyed fibers were taken out, rinsed in hot and in cool water and later air-dried at room temperature. From the optical density obtained, the concentration of the residual liquor was determined from the calibration curves obtained for the disperse dye and hence the amount of dye uptake was calculated (Figure 2) and (Figure 3) Figures 2 and 3 represent 30 s TCE treated samples in order to assess the effects of the treatment on the PET fibers at room temperature in terms of XRD and tensile properties. The XRD of the untreated and treated PET fibers in TCE was shown on (Figure 4). The reduction in the relative intensity of the treated fabric revealed that the solvent must have disturbed the amorphous region of the fabric, resulting in opening up of the structure which contributed to the enhanced dye uptake observed when compared to the untreated fabric. This observation is an indication that the solvent acted as a plasticizer that breaks the intermolecular bond with attendant increase in segmental mobility. The change in the position of the peaks indicates that the solvent treatments have affected the crystallinity of the PET fibers because of its absorption and subsequent solubility within the polymer. (Figure 5) revealed the tensile properties of the untreated and 30 s TCE treated fibers. There is increase in the values observed for extension at break and tenacity while decrease in value was recorded for Young’s modulus. The improvement in the extension at break and tenacity of the treated polyester suggests that the treatment produces some degree of molecular movement by relaxing the lateral forces which are responsible for holding the chain molecule inside the polymer [11]. Tensile properties and XRD analyses are some of the characteristics that contribute to fiber stability and enhance dye uptake. The results of the dye uptake of pretreated PET fibers in TCE at 40°C, 60°C and aqueous dyeing at 80°C are presented in (Table 1). 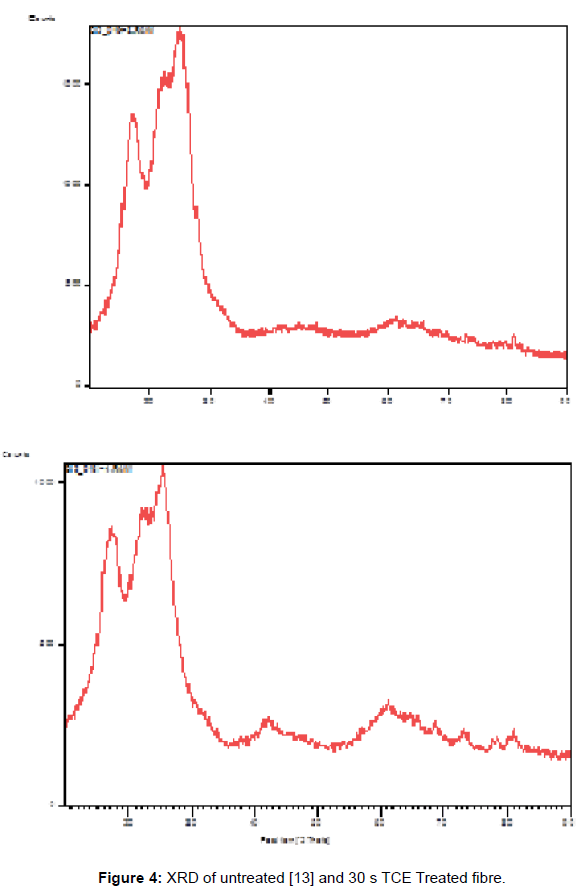 The dye uptake in TCE was found to increase with increase in treatment time as well as dyeing temperature. Solvent dyeing was found here to give higher values than that of the aqueous dyeing even at shorter treatment time. The dyeing of treated PET fibers in TCE at 40°C and 60°C showed an improvement in dye uptake compared with the amount obtained for aqueous dyeing at 80°C at the same dyeing period. From the table, dyeing of fibers pretreated at 60 sec in TCE gave 277.78 mg/g and 280.00mg/g dye uptake at 40°C and 60°C respectively whereas 190.10 mg/g was obtained for the aqueous dyeing at 80°C. This showed that trichloroethylene (TCE) may have participated in further loosening of the binding forces holding the polymer chains together, thus lowering of the glass transition temperature (Tg) of the fiber and providing suitable spaces for the dye molecules. This revealed that more dye could be absorbed into the PET fiber using TCE at relatively low dyeing temperature (Td) because at high temperature, relaxation and secondary crystallization can occur which may have substantially modify the ability of the fiber to absorb more dyestuff. The dye uptake from the solvent dyeing was also found to be temperature dependent as there was an increase in the amount of dye pick-up at 60°C as against the amount at 40°C. The desire for a solvent dyeing process at low temperature can therefore be fulfilled with the use of TCE and this could make it an alternative process to the conventional aqueous dyeing method because the process of treating waste water for re – use which is expensive and time consuming is eliminated. Also the low rate at which aqueous dyeing takes place is uneconomical to meet the requirements of current industrial processing as well as the low specific and latent heat of vaporization values of trichloroethylene (TCE) compared to that of water will also make heating in it to be cheap. Several researchers elsewhere including [12], had reported an improvement in the dyeuptake after exhaust dyeing of polyester fabrics in perchloroethylene.

The dye uptake from solvent dyeing of the fibers using trichloroethylene (TCE) showed an improvement and could make the process a better option to the conventional aqueous dyeing methods.

Copyright: © 2017 Oyeleke GO, et al. This is an open-access article distributed under the terms of the Creative Commons Attribution License, which permits unrestricted use, distribution, and reproduction in any medium, rovided the original author and source are credited.