Copyright: © 2017 Rajalakshmi R, et al. This is an open-access article distributed under the terms of the Creative Commons Attribution License, which permits unrestricted use, distribution, and reproduction in any medium, provided the original author and source are credited.

Vaginitis is an inflammation of the vagina characterized by a whitish or whitish gray discharge, often with a curd-like appearance, odor, itching and irritation. Yeasts are always present in the vagina in small numbers, and symptoms only appear with overgrowth. The vaginal swab specimens were collected from the diabetic women with signs and symptoms of vaginitis. The isolated Candida species were identified by the morphological and cultural characteristics. The isolated and identified Candida strains were included C. albicans, C. dubliniensis, C. krusei, and C. tropicalis from diabetic women with signs and symptoms of vaginitis. The isolates were subjected to determine the in vitro anticandidal activity against antifungal drugs. All Candida strains isolated from diabetic women with vaginitis were 100% sensitive to Amphotericin-B and C. krusei strains showed 100% sensitivity to ketaconazole drug. Overall 32% of Candida strains showed multidrug resistance against the antifungal drugs we used.

Vaginitis, also known as vaginal infection and vulvovaginitis, is an inflammation of the vagina and possible vulva. It can result in discharge, itching, and pain, and is often associated with an irritation or infection of the vulva. The discharge may be excessive in amounts or abnormal in color (such as yellow, gray, or green). One of the problems of women with diabetes is resistant vulvovaginitis, which is related to some factors such as hyperglycemia, allergy, and atopy. Diabetes is a known predisposing factor of vulvovaginal candidiasis, primarily because of hyperglycemia-induced alterations, including decreased random motion of neutrophils, chemotaxis, phagocytosis, and microbial killing. In addition, increased glucose levels in genital tissues enhance yeast adhesion and growth. Several factors are associated with increased symptomatic infection in women, including pregnancy, iron deficiency anaemia, uncontrolled diabetes mellitus, and the use of oral contraceptives or antibiotics [1,2]. Diabetes is a proven predisposing factor for vulvovaginal candidiasis, along with pregnancy, use of broad – spectrum antibiotics, high- estrogen-dose oral contraceptives, obesity and drug addiction [3]. Symptomatic vulvovaginal candidal infections have been shown to be more prevalent in patients with diabetes than in the general population [4] and are usually attributed to “yeast infection” by the women themselves [5].

In clinical settings, candidiasis is commonly treated with antimycotics-the antifungal drugs commonly used to treat candidiasis are topical clotrimazole, topical nystatin, fluconazole, and topical ketoconazole. It is possible for Candida albicans to develop a resistance to the drugs used to treat it, as seen from research done involving fluconazole, one of the drugs that is used to treat candidiasis and noted about the emergence of fluconazole resistant Candida species and quite remarkable percentage of yeasts and molds developed multidrug resistance [6]. In this study, the effect of antifungal drugs against Candida isolates from diabetic women with vaginitis was assessed.

The vaginal swab specimens were collected from the diabetic women with signs and symptoms of vaginitis. The specified routine procedure was followed; two vaginal swabs were collected from the posterior fornix of the vagina. One swab was used for smear preparation for gram staining and 10% KOH examination and the second swab were used for culture. Care was taken to avoid the collection of specimen from the diabetic women undergone any prior antibiotic therapy for atleast one week. The samples were safely transported to the laboratory under aseptic conditions for further proceedings.

10% KOH wet mount: A small portion of vaginal specimen was placed on clean glass slide, one or two drops of 10% Potassium hydroxide (KOH) solution was added and allowed to stand after 10-15 minutes and then examined for the presence of budding yeasts with or without pseudohyphae.

Gram stain: The smear made on the glass slide was allowed for air and heat fixation and submitted for gram staining procedure. Presence of gram-positive budding yeasts with or without pseudohyphae, number/grades of the yeast cells and the adherence pattern of the yeast cells on the epithelial cells were noted and recorded.

Inoculum preparation: Candida species/strains inoculum was prepared by suspending several colonies of grown cultures on Sabouraud’s Dextrose Agar (SDA) in phosphate buffered saline pH 7.2. Inoculum standardization was done using standard procedure in which the fungal suspensions were adjusted spectrophotometrically to an absorbance of 0.6 at 530 nm, which corresponds with the 0.5 McFarland standards.

Disk diffusion method: The commercially available following antifungal discs were Clotrimazole, Ketaconazole. Fluconazole, Nystatin and Amphotericin-B were used in this study. Each SDA plate was inoculated with the standard inoculum suspensions by soaking a swab and rotating it over the agar plate. The antifungal discs were placed over the inoculated agar. After 48 hours of incubation at 31°C zone of inhibition of growth was measured and recorded. A duplicate was also carried out [7]. The Candida strains resistant to four or more antifungal drugs were considered as multidrug resistant strains.

10% KOH wet mount examination: All 170 (100%) vaginal specimens of patients showed the presence of either budding yeasts alone or with pseudohyphae. Only 15 (30%) of control specimens showed only budding yeasts. All the 170 patients vaginal specimens yielded 100% Candida growth whereas only 24% (n=12) k growth observed in the control specimens (50).

Figure 2: Significant Candida growth–Culture of vaginal specimen from the diabetic women with vaginitis showing the appearance of more than 10 Candida colonies on SDA. 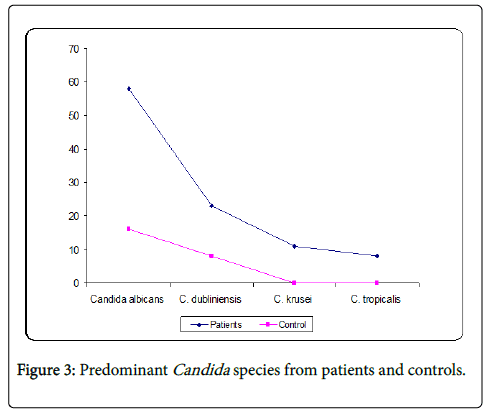 Table 1: Antifungal drug sensitivity tests of Candida isolated from the diabetic women with signs and symptoms of vaginitis. Figure 4: Candida strains isolated from the diabetic women with vaginitis-Showing the different types of susceptibility pattern to the different antifungal drugs. 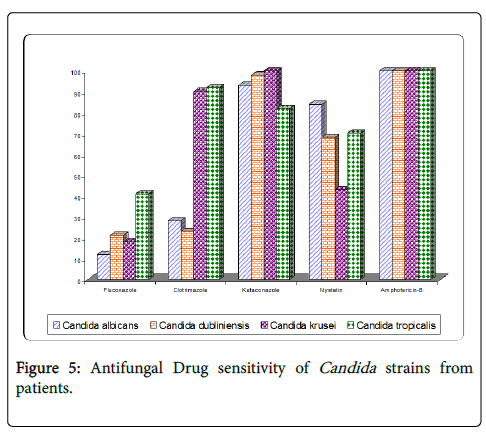 Candidiasis is the general term used to indicate the different types of Candida infections and the vaginal candidiasis is the condition in which the Candida involves and cause vaginitis.  Hyperglycemia is the major cause of increased susceptibility of the diabetic patients to vulvovaginal candidiasis. In our study all (100%) vaginal specimens showed either budding yeasts or budding yeasts with pseudohyphae. This indicates the association of Candida in vaginitis and the presence of pseudohyphae indicates the diseased status of the patients and the involvement of the Candida in vaginitis. It has been published that the production of germ tube and the pseudomycelium is due to the virulent and pathogenic nature of the Candida [6].

Udhaya et al. in their study note that the only 78% of the vaginal specimens (collected from the cancer cervix cases) and yielded Candida growth on SDA. But in our study we could able to get different results that, all vaginal specimens (100%) yielded Candida growth on SDA. Our result gains the support of the earlier publications that it is not uncommon the presence and the colonization of these Candida yeasts in the hyperglycemic conditions [12-17]. And the earlier study of Janani et al. confirms and supports our result evidently that she could able to isolate 100% Candida growth from the vaginal specimens of the asymptomatic diabetic women.

In our study, we also state that all vaginal specimens of the diabetic women with vaginitis yielded 100% significant Candida growth and the predominating species noted were C. albicans (58%) and 32% of multidrug resistance was noted to the multidrug resistant Candida strains. Most study data indicates that overall yeast carriage and infection rates increase in diabetes patients and correlate with degree of glucose control. Thus, good control of blood glucose and treatment with an appropriate antifungal agent are important in the management of vaginal candidal infections in diabetic women.  Because most of the oral and topical azoles used to treat vulvovaginitis result in comparable efficacy rates, selection of therapy should be based on factors such as causative organisms, safety and side effects, the potential for drug interactions, and patient preferences.

Since the risk of infection and healing process with diabetic patients are more, the prophylactic measures and frequent assessment of the therapy regimen is seems to be much more essential.  For which the regular and revised study of the antibiotic or antimicrobial sensitivity is essential.  And to overcome the problem of multidrug resistance, the search for the new antimicrobial is also need in this field.

All Candida species/strains isolated from diabetic women with vaginitis were 100% sensitive to Amphotericin-B and C.krusei strains (all) showed 100% sensitivity to ketaconazole drug. Overall 68% of Candida strains isolated from the diabetic women with vaginitis shown sensitivity towards antifungal drugs and 32% showed multidrug resistance against antifungal drugs we used.