Effect of Pigeon Keeping on Health and Family Life

Copyright: © 2017 Israili ZH. This is an open-access article distributed under the terms of the Creative Commons Attribution License, which permits unrestricted use, distribution and reproduction in any medium, provided the original author and source are credited.

Pigeon keeping/breeding is prevalent worldwide and a lot has been written about this hobby/profession and pigeon fanciers in the popular media, websites and books. It is well known that pigeons transmit diseases and cause pulmonary disorders in pigeon keepers/breeders, but, not much is available in the scientific/medical literature regarding the impact of this ‘addiction’ on the psychological and mental health of the individuals and family life/relations. The following narrative is based mainly on personal experience (NJI), observation (ZHI), websites and common sense.

Pigeon (Columba livia domestica - domesticated from wild rock dove) keeping/breeding, practiced for thousands of years in almost every part of the world, has evolved into a hobby or a commercial enterprise for the purpose of aesthetic satisfaction, recreation, entertainment and food [1]. The hobby of breeding or keeping pigeons by pigeon fanciers, for racing (sport), flying, homing and show, is a popular occupation throughout the world. Belgium claims to be the capital of pigeon fanciers, with the world’s most valuable racing pigeon: in 2013 Belgian’s ‘Bolt’ sold for $410,000 [2] and in 2017 it was Belgian’s ‘Golden Prince’ sold for $465,000 [3,4]. The business of breeding pigeons for food (meat and eggs) has also flourished (Figures 1 and 2). 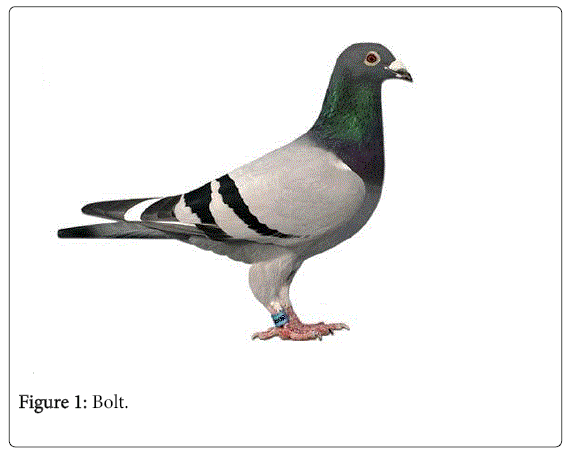 Pigeon fanciers organize exhibitions and bird shows exhibiting thousands of pigeons worldwide (for example in England, Australia, United States, Germany, Belgium, etc.), which are sponsored by hundreds of local, state and national pigeon clubs and attended by thousands of people. Many avid pigeon fanciers usually have a large number of pigeons and they often keep adding more and more to their flock.

Pigeon fanciers love their pigeons. They appreciate their beauty, grace and soothing sounds. They get euphoria, intense pleasure and pleasant excitement from seeing their pigeons perform (racing, homing, beauty, etc.). They are so passionate about pigeons that they are sometimes called ‘pigeon junkies,’ and spend an enormous amount of time and money on their hobby.

However, there is a down side to pigeon keeping/breeding in that pigeon fanciers get so involved that their first priority becomes the care and handling of the birds and see them perform, while other aspects of their life, such as their own health, health of family members, as well the emotional, psychological and financial needs of family (spouses, children and others) are neglected or diminished (NJI - personal experience); even friendships (except with fellow- fanciers) are curtailed. The children and spouses may not get the necessary emotional and quality time, necessary for a healthy family life. There may be domestic disputes and arguments resulting in strained relations. Since most of the pigeon fanciers/keepers are middle income earning males, maintaining a large flock of birds (sometime numbering in hundreds) could also have significant impact on family finances, because a significant portion of the income may go to the birds – acquisition, feeding, housing, healthcare, etc.

Addiction of pigeon fanciers/keepers appears to be behavioral in nature, such as in the case [9] of gambling disorder (pathological gambling), problematic Internet use and gaming, computer dependence, binge eating, compulsive buying, compulsive sexual activities and excessive physical activity (exercise, jogging and running), etc. Behavioral addictions may lead to psychiatric disorders [10]. In the case of pathological gambling, there is a negative impact on the quality of life and financial loss of the gambler [11], impairment of family life (emotional and psychiatric disorders), depression and disruption of social relations [12,13]. Multiple neurotransmitter systems, including dopaminergic, serotonergic, noradrenergic, glutamatergic and opioidergic, have been implicated in some behavioral addictions [14]. In some behavioral addictions, there is an increase in serum levels of endorphins [15] and brain-derived neurotropic factor [16,17].

There is nothing in the literature (Embase, Ovid, PubMed, Scopus, Web of Science), but, from direct observations and personal experience with the pigeon fanciers/keepers indicate that not only the health of the individual but also of the family members is adversely affected, family relations are disrupted, spouses and children are neglected and there is financial strain on the family. It may be difficult to convince pigeon fanciers/keepers (using psychiatric or psychological intervention) to alter their behavior (personal experience). Pigeon fanciers may also get depressed if their prized pigeon(s) do not win in competitions or do not return home. They can talk to fellow fanciers and find comfort.

Pigeons are the source of several diseases that are transmissible to humans (zoonosis), mainly from contact with dried bird droppings, feather dust and mites [18,19]. The main pathology that affects pigeon fanciers/keepers is the pulmonary disease (allergic alveolitis/ bronchiolitis/hypersensitivity pneumonitis/pneumothorax/pigeon fanciers’ lung/bird breeders’ lung [20-23]. Patients may develop pulmonary cysts [22-24], hypersensitivity pneumonitis [25-27], peribronchial fibrosis [28], infiltration of lymphocytes and plasma cells into the walls of the bronchioles and the surrounding alveolar walls [23], bronchiolectosis [28], alveolitis [28], dyspnea and hypoxia [23], pneumothorax [23]. Diagnosis of pulmonary diseases is made by chest X-ray, high-resolution chest computed tomography, pulmonary function tests, natural provocation, bronchoalveolar lavage, transbronchial lung biopsy [29], fluoroenzyme immunoassay [30], as well as presence of IgA and IgG antibodies [28,31] and other immune biomarkers [32], in the extracts of pigeon droppings and in the serum and bronchoalveolar lavage fluid of patients.

The infections which have been found to be transmitted from pigeons to humans include campylobacters [33], Chlamydia psittaci , [34,35], Cryptococcus neoformans/Candida albicans [36-39], Escherichia coli [40,41], Histoplasma capsulatum (from fungus growing on dried feces) [42], Salmonella enterica/S. typhimurium [33,42-44] and viral infections (transmitted by mosquitoes feeding on infected birds) [45,46]. Not only are the pigeon keepers/breeders/ fanciers at risk to develop the above diseases, but also member of their families who reside with them [24] and are exposed to bird droppings or feather dust.

Bird keepers/fanciers can decrease the risk of developing diseases associated with the birds by using gloves, aprons, masks, respirator while inside the lofts (birds’ housing) and by increasing loft ventilation and more often cleaning of the loft..

Avid pigeon fanciers who take part in pigeon racing and flying can damage their eyes from watching their birds in flight for a long time in the bright sun. According to the American Academy of Ophthalmology [47] and American Optometric Association [48], too much exposure to UV light from the sun raises the risks of eye diseases, such as cataract, corneal sunburn and benign growth (pterygium) [49-51]. Furthermore, staying for a long time in the sun, especially in the summer, can result in dehydration, heat-stroke, photo-allergic dermatosis [52], sunburn and solar urticaria [53], facial wrinkling [54], actinic keratosis [55], allergic hypersensitivity skin reactions [55] and cancer of the skin (cutaneous malignant melanoma [56-58], squamous cell carcinoma [55] and basal cell carcinoma [59]), more likely in fair-skinned individuals.

To protect from the damaging effect of long-term exposure to sun, one could use, appropriate sunglasses, ultraviolet radiation-blocking contact lenses (if needed), sunscreen (sunblock), wearing light colored long-sleeved shirts and avoiding exposure to sun at dangerous hours (10.00-16.00). A wide-brimmed hat may be useful, but pigeon fanciers may not like to wear one, because it may scare the birds. Dehydration and heat-stroke may be prevented by ample hydration and taking breaks from staying too long in the sun.

Worldwide, pigeon racing has gained popularity and with it the associated betting and gambling [60] and increased death of the birds while racing (it is estimated that 75% to 90% of birds fail to return after racing); in many cases, underperforming pigeons are culled [61,62]. Although, pigeon racing and betting has been banned in many cities of the United States and other countries, these practices continue [63]. Another crime associated with highly prized competition pigeons is bird-napping and smuggling [64].

It is hoped that this brief article will result in the realization of potential for adverse effects of pigeon keeping/breeding on health and family life, adoption of preventive measures and stimulating a dialog.