Effect of Planting Methods and Nitrogen Sources on Yield, Yield Components and N-Uptake of Spring Maize

Effect of Planting Methods and Nitrogen Sources on Yield, Yield Components and N-Uptake of Spring Maize

Maize (Zea mays L.) is an exhaustive cereal crop and can be used as food for human, feed for livestock and raw material for industries such as rafan etc. [1]. Among cereal crops maize occupied third position after wheat and rice in Pakistan while it comes on second position after wheat in Khyber Pakhtunkhwa. Due to its high productive potential it is often referred as ‘king of grain crops’. According to agriculture statistics of Pakistan in 2014-2015 maize production was 4.936 thousand tones having total cultivated area of 1142.5 thousand hectares in Pakistan and in same year in Khyber Pakhtunkhwa it was cultivated on 463-thousand-hectare area having production of 909.7 thousand tones [2]. Among the modern agro-management techniques planting method is one of the crucial factor for improving crop yield. Different planting methods are practiced in the world for maize sowing. Ridge planting can be considered as alternative to no tillage practices. Abdullah [3] documented that ridge method of planting significantly increased yield of maize crop in comparison with other planting methods. Conventional flat planting has some disadvantages for spring maize. It causes crusting of soil and contributes to degradation of some soil properties which causes lodging of soil. Raised bed planting system with plantation of maize crop in defined rows on top of beds can overcome this problem. Considerable work has been done in this aspect, but efforts are still required to get higher yield from sweet corn by improving these techniques. Nitrogen is one of the major plant nutrient and play an active role in plant growth and development. FYM, press mud and poultry manure are organic sources of nitrogen which can be used instead of chemical fertilizers for getting higher yield of crops. Continuous application of chemical fertilizers in the soils cause toxicity, depletion of soil fertility and decreases activities of soil microorganisms. Organic manures are the best substitute of chemical fertilizers for improving soil fertility. Poultry manure contains highest percentage of N, P, K and is valuable organic manure [4]. Fertilization of poultry manure supplies higher amount of Phosphorus to plants than other organic fertilizers [5]. Press mud is a byproduct of sugar mills which can be separated from sugarcane juice. Press mud is a valuable source of essential plant nutrients [6]. FYM is an important organic fertilizer and increases maize yield, soil organic matter and soil fertility on sustainable basis [7]. Keeping in view the importance of planting methods and nitrogen sources for achieving higher grain yield from maize the present study was planned to study the effect of planting methods and nitrogen sources on yield and yield components of spring maize.

Ear length of spring maize was significantly (p ≤ 0.05) affected by planting methods and nitrogen sources. Maximum ear length (18.5 cm) was recorded in ridge planting method. This might be due to more moisture availability and good crop stands in ridge because crop can get more porous soil and better root penetration in to soil which increases utilization of nutrients. These results are in line with Khan [9] reported that ridge sowing influence ear length more than other planting methods. Minimum ear length (14.0 cm) were recorded in flat planting which was statistically at par with ear length observed in raised bed (16 cm). Among different nitrogen sources maximum ear length (19.9 cm) were recorded with application of poultry manure. Minimum ear length (13.4 cm) were recorded in control plots. The reason for maximum ear length with poultry manure application may be due to more photosynthetic activities of the plant on adequate supply of nutrients because poultry manure has narrow C:N ratio which increases mineralization and ensure availability of nitrogen for entire growth season of crop. These results were confirmed by Amjad [10] reported a significant increase in ear length of maize by increasing rates of nitrogen from different nitrogen sources.

Analysis of data showed that grain weight was significantly (p ≤ 0.05) affected by different planting methods. Higher grain weight (338.5 g) was recorded in ridge planting method. Increase in grain weight in ridge planting method might be due to the fact that ridge method of planting provides proper aeration of soil which enhanced uptake of nutrients from soil. This fact was also supported by Sandhu and Hundal [16] and Muhammad et al. [17] who recorded maximum grain yield in ridge sowing. Minimum thousand grain weights (303 g) were recorded in flat planting method. Likewise, poultry manure applied plots resulted maximum grain weight (354.5 g). As poultry manure are organic fertilizer which slowly decomposed and provide nutrients to the crop through-out in its growing season. Comparable significant results were also reported by Sahoo and Panda [18].

Planting methods and nitrogen sources significantly (p ≤ 0.05) affected grain yield of spring maize. Maximum grain yield (3695 kg ha-1) was recorded in ridge planting method. This might be due to the fact that ridge provides a better soil environmental condition for root penetration and increase uptake of nutrients and ultimately improves yield contributing factors as compared to other planting methods. Significant effect of ridge plantation on grain yield ha-1 and its components has also been reported by Khokhar et al. and Bhagwan et al. [22,23]. Likewise, maximum grain yield (4350 kg ha-1) was recorded in plots fertilized with poultry manure followed by urea applied plots (4142 kg ha-1). Increase in grain yield by poultry manure application may be due to more availability of nutrients in the soil and efficient utilization of these nutrients by the crop throughout growing season which improves crop growth and photosynthetic activities and resulted more grain yield. Similarly, Ayoola et al. [24] and Boatenget al. [25] also concluded from their research that poultry manure significantly increased grain yield.

Analysis of data showed that N-uptake were significantly (p ≤ 0.05) affected by different N-sources, while planting methods had no significant (p ≤ 0.05) impact on total N-uptake, similarly the interaction were also found non-significant (Table 2). Maximum Nuptake (97.7 kg ha-1) was recorded in the plots applied poultry manure followed by N-uptake from Urea (82.4 kg ha-1) and then FYM (78.7 kg ha-1) fertilized plots. These results might be due to the minimum losses and availability of N from poultry manure (Figures 1 and 2). 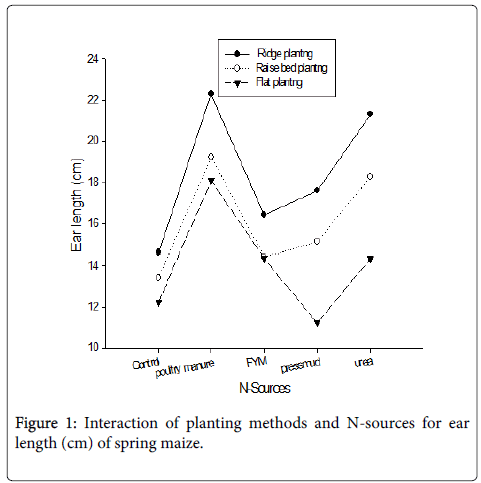 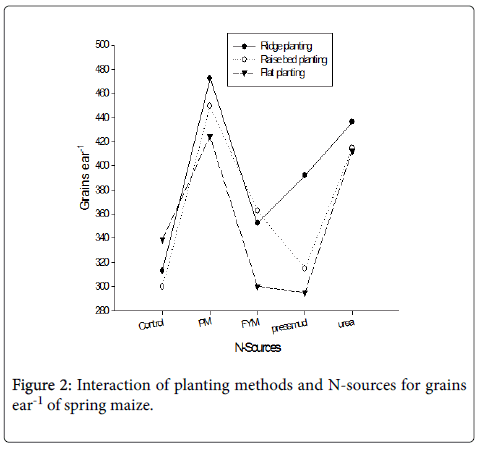 Figure 2: Interaction of planting methods and N-sources for grains ear-1 of spring maize.

Copyright: © 2018 Kashif M, et al. This is an open-access article distributed under the terms of the Creative Commons Attribution License, which permits unrestricted use, distribution, and reproduction in any medium, provided the original author and source are credited.