Copyright: © 2017 Tanaka N, et al. This is an open-access article distributed under the terms of the Creative Commons Attribution License, which permits unrestricted use, distribution, and reproduction in any medium, provided the original author and source are credited.

Purpose: In recent years, robotics have been used for rehabilitation. We developed a footpad-type locomotion interface using robot technology, and we reported improvement on gait speed and muscle strength. The purpose of this study was to compare the effects of gait training using a footpad-type locomotion interface (GTLI) with those of body weight support treadmill training (BWSTT).

Methods: Eleven chronic post-stroke patients participated in this study. The subjects received GTLI and BWSTT respectively three times a week for a total of 12 times. The outcome measures were maximum gait speed, timed up and go test, and isometric muscle strengths of both hip and knee flexion and extension

Result: No differences were observed in the gait speed and timed up and go test among GTLI and BWSTT. In isometric muscle strengths, GTLI improved better than BWSTT.

Conclusion: These results suggest that GTLI and BWST have similar effects on improving the gait and balance abilities. In addition, GTLI is more effective in improving the isometric muscle strength of hip extension and knee flexion than using BWSTT. Body weight support treadmill training (BWSTT) is one of the most used gait training methods in recent years. BWSTT has been reported for intervention effects and efficacy. The purpose of this study was to examine the effectiveness of gait training using a footpad-type locomotion interface (GTLI) by comparing GTLI and BWSTT. 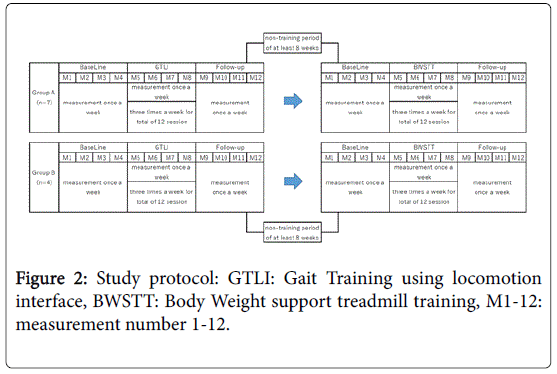 The condition of gait training using GTLI and BWSTT was as follows: (a) gait training was 20 min once a day, (b) the gait speed set as fast as possible, (c) The subjects were able to grip the handrail. The gait speed, stride, and were controlled in accord with the subject’s condition. During gait training, the subject’s body movement and lower limb movement were assisted by a physical therapist as needed. In BWSTT, the amount of body-weight support was fixed at 20% in all BWSTT sessions.

The outcome measures were maximum gait speed, timed up and go test (TUG), and isometric muscle strengths of both hip and knee flexion and extension. For the assessment of gait speed, the subjects walked 10m on the ground at maximum speeds. We measured three times and used the fastest speed.

The TUG measures the time, in seconds, that it takes an individual to stand up from a chair, walk a distance of 3m, turn, walk back to the chair and sit down again.

These measures were evaluated at once a week (Measurement, M: M1-12, Figure 2). There was a non-training period of at least 8 weeks between each training session.

For maximum gait speed, TUG and muscle strengths, we calculated the change from the pre-training. The Mann-Whitney test was used to compare the changes at post-training (M8) or 1-month after posttraining (M12) of the GTLI and BWSTT and as well as the characteristics of groups A and B.

This study was approved by the ethics committee of Tsukuba Memorial Hospital, and all participants or their legal representatives gave written informed consent to participate in the study.

Table 2: Clinical data and initial assessment data for both group.

We found no significant difference between the GTLI and BWSTT in change in the other isometric muscle strength at post-training and 1-month after post-training.

In gait speed and TUG, there was no significant difference between GTLI and BWSTT. These results show that GTLI has similar efficacy as BWSTT, which is recommended in the stroke treatment guidelines [8] in gait speed, and TUG.

Regarding isometric muscle strengths, paretic hip extension and paretic knee flexion were significantly more improved by GTLI than BWSTT. There were few reports about the improvement of the muscle strength in robotic gait training. We reported that GTLI significant high muscle activity than treadmill walking in healthy subjects [9]. For this reason, GTLI may have higher muscle activity than BWSTT in stroke patients.

These results suggest that GTLI and BWST have similar effects on improving the gait and balance abilities. In addition, GTLI is more effective in improving the lower-limb isometric muscle strength than that using BWSTT. Moreover, many of gait training using BWSTT and robots are used in hospitals and clinics. GTLI has been developed as portable equipment [10], so it may be useful as a home exercise as well as hospitals and clinics.