Copyright: © 2015 Sunil Kumar Naik TS, et al. This is an open-access article distributed under the terms of the Creative Commons Attribution License, which permits unrestricted use, distribution, and reproduction in any medium, provided the original author and source are credied.

Sodium alpha olefin sulphonate (SAOS) was used for the modification of carbon paste electrode (CPE) to determine the electrochemical behavior of folic acid (FA) in 0.2M phosphate buffer solution (PBS) at pH 7.4 with the scan rate of 50 mVs-1. The effects of scan rate, concentration and simultaneous determination of FA at modified carbon paste electrode (MCPE) were studied. The effect of interference of dopamine was carried out and real sample analysis of FA was studied at MCPE. From the scan rate and concentration shows that, the overall electrode process was found to be diffusion-controlled at SAOSMCPE and detection limit was found to be 28.8 μM. The modified electrode (SAOSMCPE) exhibits good electrocatalytic activity towards the determination of folic acid when compared to BCPE. The same method can also be applied for other drug analysis.

Vitamins are a group of organic compounds, essential in small amount for the normal functioning of the body and regulate the metabolic activity [1]. Deficiency of vitamins may result in often painful and potentially harmful diseases. As a result vitamins play an important role in our body. Folic acid (FA) (vitamin BC, vitamin M or vitamin B9) is a water soluble vitamin and was first discovered in Spinach [2]. During metabolism FA involved in single carbon transfer reactions and it is the precursor of the active tetrahydrofolic acid coenzyme [3]. FA is a nutrient of great importance, especially for women planning for pregnancy. To reduce significantly the incidence and reoccurrence of neural tube defects periconceptual supplementation of folic acid has been demonstrated [4]. Moreover FA is usually employed in the treatment or prevention of megaloblastic anemia during pregnancy [5]. The US Food and Drug Administration introduced mandatory reinforcement of cereal-grain products with folic acid at a concentration of 140 mg/100 g in January 1998 [6]. The Department of Health in the UK proposed fortification of flour with folic acid at 240 mg/100 g [7]. Deficiency of FA gives rise to the macrocytic anemia [8]. Hence FA determination is often required in pharmaceutical, clinical and food samples. There are several methods were reported for the determination of FA including liquid chromatography/tandem mass spectrometry (LC/MS/MS) [9], High Performance Liquid Chromatography (HPLC) [10], Capillary Electrophoresis [11], Microemulsion Electrokinetic Chromatography (MEEKC) [12] and Enzyme linked Immunosorbent assay (ELISAs) [13] and electrochemical methods [14]. Among these techniques electrochemical method is significant one because of its convenience and low cost [15]. FA (Scheme 1) is one of the electroactive species and accordingly we employed electrochemical method for the determination and some of the electrochemical methods for other electro-active species have been reported [16-20].

Dopamine (Scheme 2) is one of the most significant catecholamine, functioning as a neurotransmitter in the central nervous system and deficiency of DA leads to the Parkinson’s disease [21-22]. Changes in DA concentration in biological sample indicate the possibility of abnormalities or diseases in human being. Therefore, the determination of DA plays an important role. DA possesses high electrochemical activity and has been widely studied by electroanalytical techniques to significantly advantage towards biosciences [23-25]. Dopamine has been determined using various electrochemical methods [26]. One of the most significant methods is the determination of analytes by using modified carbon paste electrode through the voltammetic technique, which has the ability to eliminate the interfering substances from DA. The modification can be done by adding different types of modifiers [27-32].

In this study, the surfactant (sodium alpha olefin sulphonate (Scheme 3)) is used as a modifier for the electrochemical determination of FA and DA. The term surfactant is derived from surface active agent and is a compound that contains a hydrophilic (attracted to water) and a hydrophobic (repelled by water) segments. Because of their unique molecular structures, surfactant has been extensively used in the fields of electrochemistry and electroanalytical chemistry [33-36] for various purposes. To improve the detection limits of some biomolecules Hu’s group [37-39] has introduced surfactants to electroanalytical chemistry.

In present work, a simple and sensitive voltammetric method was presented for the electrochemical determination of folic acid at SAOS modified carbon paste electrode. The modified electrode showed an excellent electrocatalytic activity for the oxidation of FA in presence of dopamine.

The bare CPE was prepared by hand mixing graphite powder and silicone oil in the ratio 70:30 (w/w) for about 30 minutes in an agate mortar to produce a homogeneous mixture. The paste was then packed into the homemade cavity. Sodium alpha olefin sulphonate modified carbon paste electrode (SAOSMCPE) was prepared by immobilizing 15 μL of sodium alpha olefin sulphonate (SAOS) on to the surface of bare carbon paste electrode for 5 minutes.

In optimization of modified CPE towards the K4[Fe(CN)6], the bare CPE was immobilized on to the surface of the carbon paste electrode in the different concentrations (5, 10, 15, 20, 25 and 30 μL) of SAOS and their electrochemical response towards 1mM K4[Fe(CN)6] in presence of 1M KCl as supporting electrolyte was studied. The obtained result illustrates the increase in the quantity of SAOS the corresponding anodic peak current increases upto 15 μL and afterwards the current goes on decreasing (Figure 1), as a result the 15 μL of SAOS immobilized modified CPE was preferred for further electrochemical investigation. 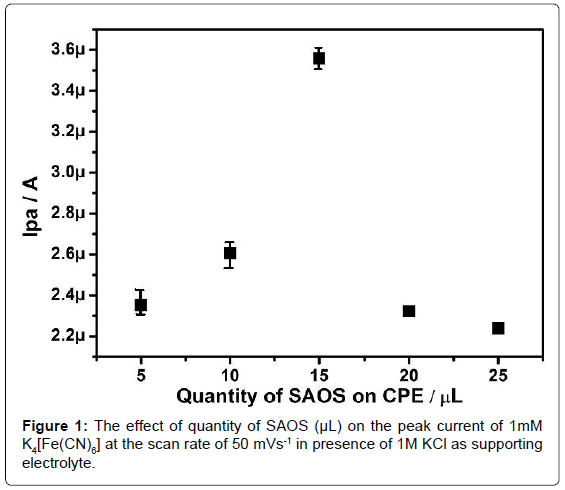 Figure 1: The effect of quantity of SAOS (μL) on the peak current of 1mM K4[Fe(CN)6] at the scan rate of 50 mVs-1 in presence of 1M KCl as supporting electrolyte.

In order to standardize the fabricated SAOSMCPE, potassium ferrocyanide was used for the electrochemical parameters. Figure 2 shows the cyclic voltammograms of 1mM K4[Fe(CN)6] at bare (dotted line) and SAOSMCPE (solid line) in presence of 1M KCl as supporting electrolyte with a scan rate of 50 mVs-1. Comparatively SAOSMCPE shows increase in redox peak currents of 1mM K4[Fe(CN)6] than BCPE. The probable mechanism is the SAOS surfactant molecules diffuses into the carbon paste electrode along with the potassium ferrocyanide and causes increase in the redox peak signals [40]. The difference in redox peak potential (ΔEp) for BCPE was found to be 0.114 V and 0.084 V for SAOS modified carbon paste electrode. The ΔEp is a function of the rate of electron transfer, hence lower the ΔEp value higher will be the electron transfer rate [41]. The proposed modified electrode shows lower ΔEp value than the BCPE and exhibits great enhancement in the redox peak current. Figure 3a shows the cyclic voltammograms of potassium ferrocyanide at different scan rates. The redox peak current of potassium ferrocyanide goes on increases with increase in scan rate. The plot of Ipa versus scan rate shows good linearity with correlation coefficient value R2=0.99958 as shown in Figure 3b. The plot of Ipa v/s square root of scan rate also shows good linearity with the correlation coefficient value R2=0.9965 as shown in Figure 3c. From the scan rate study the electrode process was found to be both adsorption and diffusion controlled. Based on the above observation SAOSMCPE shows favorable electrocatalytic behavior and it might be used as a chemically modified electrode to explore electroanalytical application. 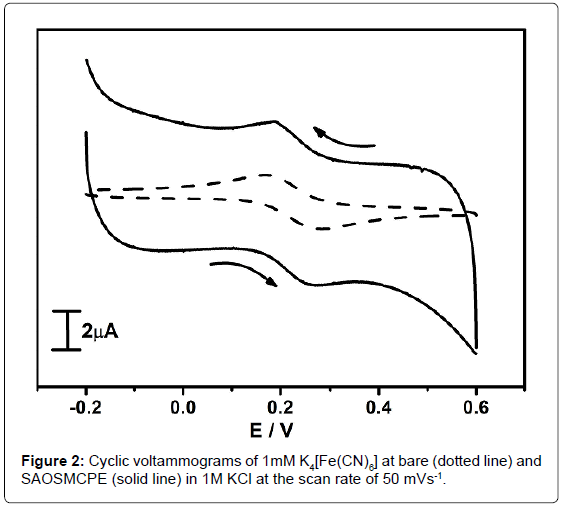 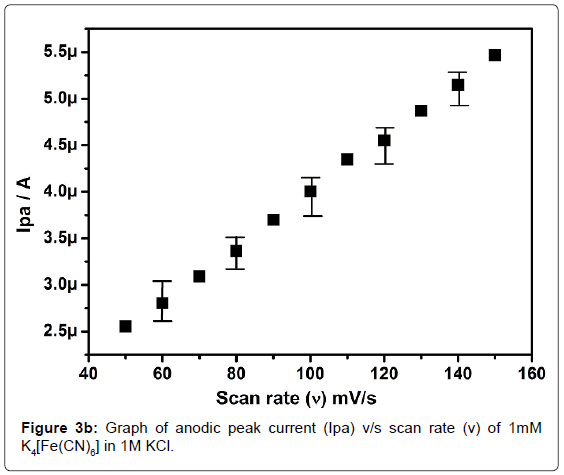 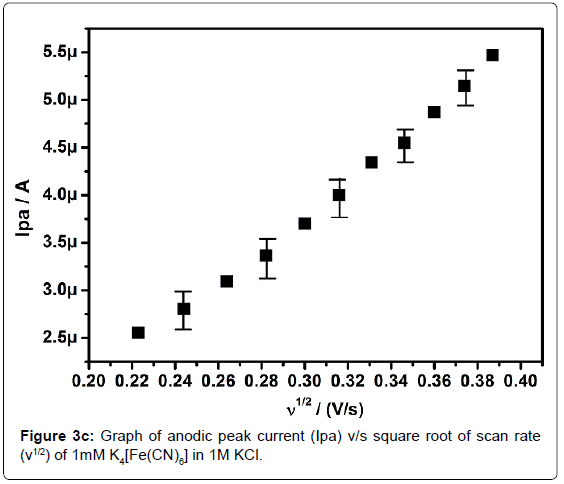 The electrochemical response of folic acid (FA) was studied at SAOS modified carbon paste electrode. The Figure 4 shows the cyclic voltammograms of 0.5 × 10-4M folic acid at BCPE (dotted line) and SAOSMCPE (solid line) in 0.2M PBS at pH 7.4 with the scan rate of 50 mVs-1. Comparatively SAOSMCPE shows great enhancement in the anodic peak current (Ipa) than BCPE. Thus remarkable improvement in electrochemical sensitivity towards folic acid at SAOSMCPE gives an evidence for the catalytic effect of proposed electrode. 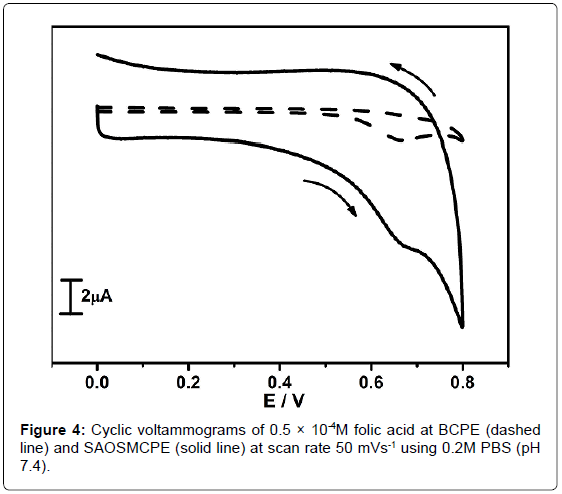 Effect of scan rate on SAOSMCPE 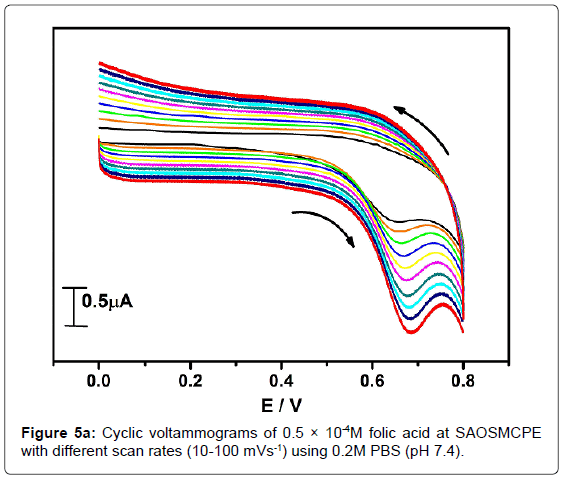 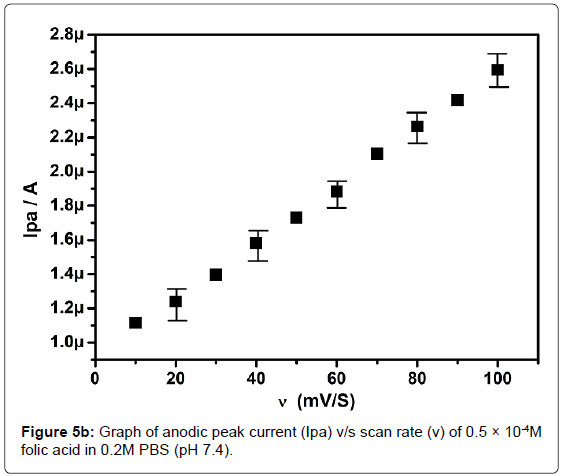 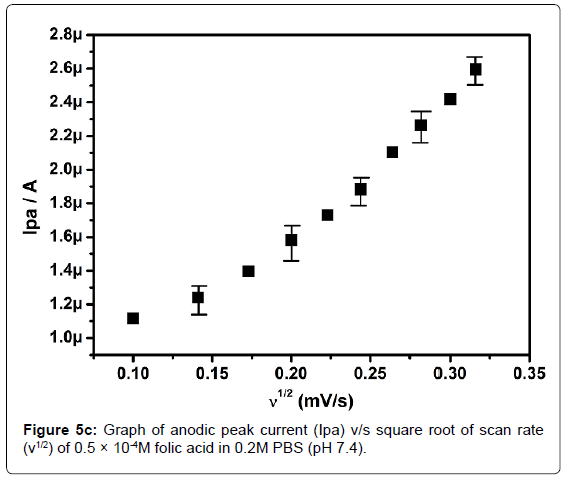 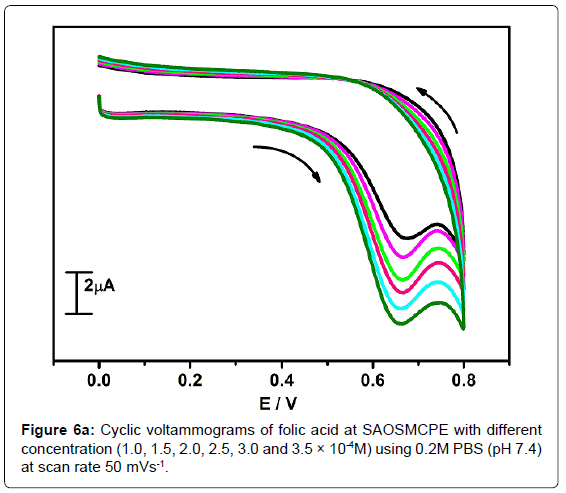 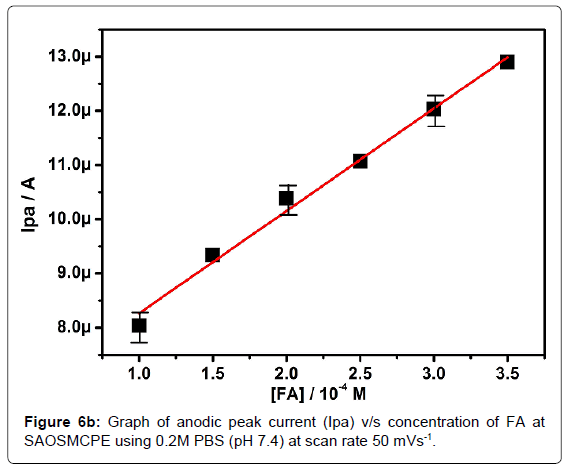 Where, S is the standard deviation and M is the slope

Simultaneous electrochemical determination of FA and DA at SAOSMCPE 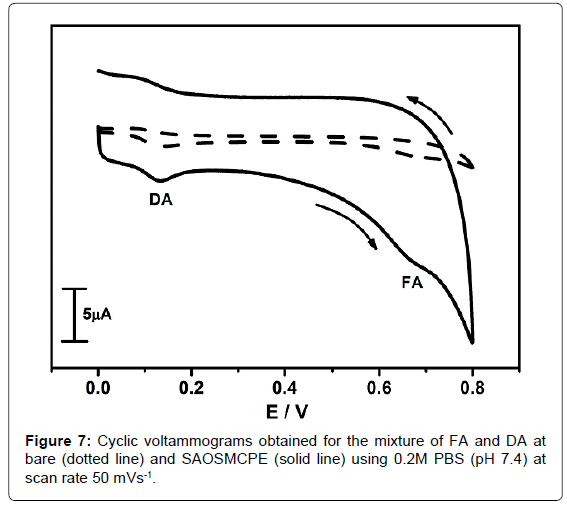 Determination of folic acid in tablet

To investigate the capability of the modified electrode for the determination of the folic acid in the tablet. By using standard addition method, the recovery test was obtained for the voltammetric signals and the observed results were shown in Table 1.

Table 1: Voltammetric signals and their results.