Copyright: ©2015 Mishra RK, et al. This is an open-access article distributed under the terms of the Creative Commons Attribution License, which permits unrestricted use, distribution, and reproduction in any medium, provided the original author and source are credited.

Seed germination and seedling survival percentage of Shorea robusta was studied in Similipal Biosphere Reserve (SBR) from 2010 to 2011. During the investigation period it was found that larger seeds (12 to 14 mm diameter) exhibited higher germination percentage (70 ± 6.5%) and all the seedlings survived. On the other hand, smaller seeds showed a very low percentage of germination (25 ± 4.24%) and none of the seedlings survived. It was also noticed from the study that the growth phase of the parent tree has a prominent effect on the germination potential of seeds. Juvenile trees with Girth at Breast Height (GBH) 75 to 80 cm as well as over mature (GBH: 91 to105 cm) or senile trees (GBH: 106 to 150 cm) produce seeds with a lesser germination capacity. However, young trees (GBH: 81 to 90 cm) produce seeds with a higher germination potential. Not only these aspects but also the orientation of seeds showed a peculiar phenomenon during natural germination. Maximum percentage (85 ± 12.75%) of seed germination was marked in case of seeds fallen on the forest floor in inverted position in comparison to other seed orientation types i.e. upright and horizontal. The uprightly falling seeds on the forest floor exhibited the minimum percentage (32 ± 6.84%) of germination, while horizontally falling seeds showed an intermediate range of germination percentage. Percentage survival of seedlings also followed the same pattern.

The greater parts of the forest area of Similipal Biosphere Reserve (SBR) are covered by moist deciduous forests, where Shorea robusta dominating in the overstorey layer [1]. It is not only a dominant overstorey (tree) species of moist deciduous forest covers of Similipal but also one of the major species of tropical moist deciduous forests of Odisha and India [2]. In such forests the seeds of Sal have been the subject of great interest for the forest researchers and plantation managers as they are categorized under recalcitrant seeds and possess a very short period of viability [3-5]. Though the plants produce flowers and fruits luxuriantly in the plains and foothills, its overall natural regeneration is very poor [6]. As a result, the Sal forests are becoming reduced its size gradually. Even worse is the fact that it exhibits largescale mortality or die-back at the seedling stage due to drought [7]. Since Sal is one of the economic timbers-yielding plants and used variously, its artificial regeneration is required on a very large scale. However, time-consuming transportation of the seeds from the site of collection to the nurseries reduces the viability of seeds [8]. Several investigations on seed germination and seedling survival of Sal were carried out by several workers in India [9,10], but there is a conspicuous lack of such studies for the forest covers of Odisha. As Shorea robusta is the dominant species of the forest covers of Odisha in general and Similipal in particular and the area of Sal forests is gradually reduced with progress in time, the present study was undertaken to analyze the germination potential and seedling survival of this dominant species in natural conditions of Similipal Biosphere Reserve (SBR).

The study was carried out in SBR located in Mayurbhanj district of Odisha (21º28′-22º 08′ N latitude and 86º04′-86º 37′ E longitudes). The climate of the reserve is influenced by a monsoon pattern of rainfall. Maximum rainfall occurred from mid June to October accounting for 75-80% of annual rainfall. Summer and winter were relatively dry generally with rainfall of <15 cm (Figure 1). Summer was not unbearable, as the maximum temperature never exceeds 40°C. Winter was severe and the temperature comes down to 3°C with frosts in valleys. Spring was very pleasant. Because of luxuriant vegetation cover and a network of perennial streams, Similipal is relatively moist throughout the year. Minimum humidity of Similipal ranged from 40 to 70% at 06:00 and maximum ranged from 73 to 90% at 18:00 (Figure 1). 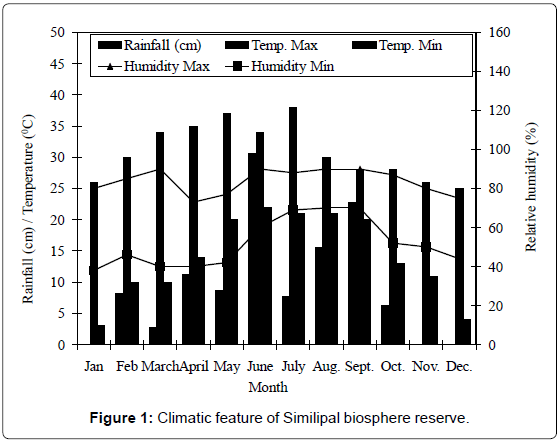 The study site was sampled using square quadrats. A total of 40 quadrats of 20 m×20 m for tree (≥ 30 cm cbh) species, 160 quadrats of 5 m×5 m for shrubs and 200 quadrats of 1 m×1 m for herbs were placed randomly. Plant species were collected, brought to the laboratory and identified with the help of Flora of Orissa [11]. Canopy area of tree species was calculated following Larson and Zaman [12]. Tree, shrub and herb densities were calculated following Misra [13].

Five number of soil samples were collected from the study site during May to June 2010 at a depth of 0-15 cm. The moisture percentage was determined as per Misra and the soil pH was measured using a digital pH meter (Systronics, 802) in a 1:5 soil water suspension. Soil organic carbon [14], available phosphorus [15] and nitrate nitrogen [16] were measured spectrophotometrically. The available potassium was measured with the help of a flame photometer and total nitrogen content by Kjeldahl digestion method [17]. Light intensity on the forest floor in the study site was measured using a Quantum Sensor (Hansatech, QSRED, UK).

Structure of seed and seed selection

The seed of Shorea robusta is inseparable from the fruit and therefore germinates as such. It is ovoid in shape with acuminate tip, surrounded by five persistent sepaloid wings. The sepaloid wings are thin, membranous or papery and are arranged in two whorls. The outer whorl possesses three wings and the inner whorl has two. These wings do not wither away but get decayed upon seed germination [18]. Fruit wall is thin and indehiscent enclosing a single, non-endospermic seed. Seeds selected for germination trial was free from external damage, offcolour, damaged by pathogens and insects. Only pure seeds were used for germination trials on the forest floor of the buffer area.

To determine the germination capabilities of seeds of Shorea robusta, 12 numbers of 2 m×2 m plots were established on the forest floor in buffer areas of Similipal during the peak period of seed fall i.e. in the month of June. For each character of seed (seed size, orientation, age of seeds and seeds collected from mother plants having different girth), three seed plots were established after removal of seeds of other plant species along with earlier fallen seeds of Shorea robusta keeping all other materials in intact position. Each seed plot contained 100 numbers of seeds. The seed plots were roofed with a fine nylon net to avoid natural seed deposition until the seeds germinated. After emergence of seedlings, nylon net was replaced with PVC pipes just to demarcate the seed plots for subsequent observations. Percentage of germination of seeds and seedling survival was observed for a period of one year until the next season of seed fall

Test for seed viability and measurement of seedling growth

Seed viability was determined using the methods given by ISTA [19] and the percent germination of seeds was calculated on the basis of viable seeds [20] as follows:

Growth preference of seedlings was monitored non-destructively by measuring plant height with the help of a centimeter scale and counting the number of leaves per seedling after two months.

Several interacting factors have been found responsible for the germination potential of Sal seeds; therefore, germination capacity differs widely even when a single factor changes. During the investigation period it was noticed that larger seeds with 12-14 mm diameter exhibited higher germination percentage (70 ± 6.5%) and all the seedlings survived. On the other hand, smaller seeds showed a very low percentage of germination (25 ± 4.24%) and none of the seedlings survived (Table 2). Jain [22] made similar observations in Sal forests of Madhya Pradesh. The reason for higher germination and survival percentage of seedlings from larger seeds may be the storage of large nutrient pool which is required to fulfill the demand of energy during germination and initial growth. Not only the genetic constituent of the seeds, but also the environmental factors like light intensity, relative humidity and fertility status of the seeds are responsible for the size of the seeds, as it is well established that

From the investigated data on seed germination of Shorea robusta it was assessed that both germination percent and seedling survival were reduced with an increase in age of seeds in days. In fresh and four-day old seeds, the percentage of germination was 90 ± 6.72% and 80 ± 4.35%, respectively. Similarly the percentage of seedling survival of fresh and four-day old seeds was 70 ± 11.2% and 60 ± 13.8%, respectively. However, in 12-day old seeds, the percentage of germination was only 10 ± 1.3% and not a single germinated seed was transformed to form the seedling (Table 3). The height of two-month old seedlings developed from ageing seeds of Sal also decreased in vigour in comparison to seedlings developed from fresh seeds (Table 3).

A similar observation was also made on Sal seeds by Nautiyal and Purohit [23] who pointed out that as the ageing progressed, there was a rapid loss in moisture content of all seed parts. It was the maximum and most rapid in seed coat. By the time the seeds lost their viability, the moisture content fell from an initial 54% to only 2%. However, the process of dehydration was maximum in cotyledons and slowest in the embryo. This sequential loss of moisture content damages the cellular membrane, thus resulting in the loss of their selectively permeable character [24].

Effect of tree girth on germination potential of seeds

Seeds collected from mother plants of different Girth at Breast Height (GBH) showed variation in germination potential (Table 4). The young trees possessed the seeds that showed a higher germination capacity (54 ± 10.11%) than the juvenile (45 ± 6.51%), over-mature (33 ± 5.04%) and senile (21 ± 2.78%) trees. Yadev et al. and Prasad and Jalil [25] observed similar phenomena in germination percentages of Sal seeds with respect to seeds collected from trees of different girth classes. Mutanal et al. [26] also noticed the similar type of observation on seed germination and seedling growth in Tectona grandis with respect to gbh of the mother plant.

Table 5: Effect of seed orientation on the seed germination and seedling survival percentage of Shorea robusta in SBR.

Seeds were found to mostly fall horizontally as the dispersal of seeds is by parachute method due to the well developed wings (modified sepals). However, the number of seeds fallen in the inverted position on the forest floor was found to be minimum. Orientation of seeds in which radicle and plumule have to take a turn of 90 or 180 degrees for achieving their normal position, needs extra hormones and energy which are limiting factors in their initial phase of seedling growth. Thus, a bulk of seedlings (maximum record 70%) degenerates. It is certainly a very important aspect which should be followed by the forest managers and other forest officials when they raise Sal seedlings in the nurseries as well as in the field plantations.

We are thankful to the Director and other forest officials of Similipal Biosphere Reserve for their active cooperation in the field work. Financial assistance to R. C. M. from CSIR, New Delhi is greatly acknowledged.