Copyright: © 2014 Deepa R, et al. This is an open-access article distributed under the terms of the Creative Commons Attribution License, which permits unrestricted use, distribution, and reproduction in any medium, provided the original author and source are credited.

Resorcinol is dihydroxy benzene and the stem extracted resorcinols have medicinal importance and is widely used as antiseptic and disinfectant. Electron transfer plays a fundamental role in governing the pathway of chemical reactions. Generally voltammetry is the electrochemical technique in which the current at an electrode is measured as a function of the potential or voltage applied to the electrode. Cyclic voltammetry is the most versatile electroanalytical technique for the study of electroactive species. It is used in all fields of chemical and biological sciences as a means of studying redox states. The crude ethanol extract of Pterocarpus marsupium RoxB was analysed by cyclic voltammetric technique and it shows the presence of higher concentration of resorcinol. The effect of concentration and scan rate was varied for the crude ethanol extract at bare carbon paste electrode. The technique adopted was very easy, shows good reproducibility and high stability in its voltammetric response. This method can be used for the identification of some bioactive molecules.

Pterocarpus marsupium Roxb (Papilionaceae) is a deciduous tree commonly distributed in forests of the western ghats of India. The plant is commonly known as Asanahm bijakah (Sanskrit), Red Kino tree (English) and Honne (Kannada). The gum obtained from the stem is used as astringent, in diarrhea and for toothache and the leaves are useful as external applications for boils, sores and skin diseases. The flowers are used in fever, and the gum is locally applied in leucorrhoea and passive haemorrhage. The stem bark of P. marsupium was collected from Theerthahalli, Shimoga, Karnataka. Pt. marsupium Rox b heartwood is known to be a rich source of flavonoids and related phenolic compounds [1,2] and elsewhere [3,4].

The fundamental process in electrochemical reactions is the transfer of electrons between the electrode surface and molecules in the interfacial region either in solution or immobilized at the electrode surface. Electron transfer plays a fundamental role in governing the pathway of chemical reactions. Carbon was the chosen surface, as it is highly conducting with a wide potential window, structurally stable, relatively inexpensive and stable layers of modifiers can attach to the surface in a controllable manner. There are many different forms of conducting carbon materials including glassy carbon (GC), highly oriented pyrolytic graphite (HOPG), pyrolysed photoresist film (PPF), carbon nanotubes, carbon powder, screen printed carbon, carbon fibers, carbon nanocapsules, Fullerene and carbon composites [5].

Biological, Inorganic, and physical, chemists widely use voltammetric techniques for a variety of purposes, including fundamental studies of oxidation and reduction processes in various media, adsorption processes on surfaces, electron transfer and reaction mechanisms, kinetics of electron transfer processes, and transport, speciation, and thermodynamic properties of solvated species. Analytical chemists routinely use voltammetric techniques for the quantitative determination of a variety of dissolved inorganic and organic substances Voltammetric methods are also applied to the determination of compounds of pharmaceutical interest and, when coupled with HPLC, they are effective tools for the analysis of complex mixtures [6,7].

Cyclic voltammetry is the most versatile electroanalytical technique for the study of electroactive species. It is used in all fields of chemistry as a means of studying redox states. The electrode potential at which a drug, a metal ion or complex or some other compound undergoes reduction (acceptance of electrons) or oxidation (removal of electrons) can be rapidly located by cyclic voltammetry (CV). The versatility of CV combined with its simplicity has resulted in its rapid growth in popularity. The effectiveness of results from its capability for rapidly observing redox behaviour over a wide range. A very important aspect of CV is its ability to generate a new redox species during the first potential scan and then probe the species fate on the second and subsequent scans. CV is therefore a powerful kinetic probe monitoring reactive species. Since the rate of potential scan is variable, both fast and slow reaction can be followed [8].

Electrochemical techniques provide efficient tools for surface modifications. Very simple experiments can be performed where species from solution can be physically adsorb, electropolymerised, or covalently attached onto the electrode surface at certain controlled potential. Analytical chemists routinely use voltammetric techniques for the quantitative determination of a variety of dissolved inorganic and organic substances. Inorganic, physical, and biological chemists widely use voltammetric techniques for a variety of purposes, including fundamental studies of oxidation and reduction processes in various media, adsorption processes on surfaces, electron transfer and reaction mechanisms, kinetics of electron transfer processes, and transport, speciation, and thermodynamic properties of solvated species. Voltammetric methods are also applied to the determination of compounds of pharmaceutical interest and, when coupled with HPLC, they are effective tools for the analysis of complex mixtures [9,10].

In this work, the ethanol extracted P. marsupium has been determined at bare carbon paste electrode using electrochemical method which is cyclic voltammetric technique. In continuation of our work on the phytochemistry [11-13] extended to voltammetric investigation of some bioactive molecules in the extraction processes.

The material was air dried under shade, powdered mechanically and stored in airtight containers. About 0.5 kg of the powdered material was boiled with 3 liters of distilled water for 30 min and filtered to obtain the aqueous extract. The extract was concentrated under reduced pressure and finally dried using the water bath. Another 1 kg of the powdered material was subjected for soxhlation. It was refluxed with ethanol for 48 h in batches of 250 g each. The extracts were pooled together and concentrated in vacuum using rotary flash evaporator.

Cyclic voltammetry (CV) was performed in an analytical system Model CHI-660c potentiostat respectively. A conventional threeelectrode cell assembly consisting of a standard calomel electrode (SCE) reference electrode and a Pt wire counter electrode were used for the electrochemical measurements. The working electrode was carbon paste electrode and all the potentials were reported versus the SCE.

Calculation of Surface Area of the CPE

The surface area of electrode plays important role in electrochemical measurements. Therefore the CPE surface area was determined using potassium ferrocyanide system in 1 mol/L KCl. The effect of scan rate on cyclic voltammograms of 1 mM solution of ferrocyanide has been studied at 0.05, 0.06, 0.07, 0.08, 0.09, and 0.1 Vs-1. For a reversible redox couple, the number of electrons transferred in the electrode reaction can be determined by the separation between the peak potentials ΔEp (Epa -Epc) / n ~ 0.059 V. The value found to vary from 0.061 V and 0.065 V which corresponds to one electron transfer. Also the ratio of ipa / ipc was found to be close to one (0.9911) which is a typical behaviour, exhibited by a reversible electrochemical transfer. On substitution of the diffusion-coefficient value (12.2 × 106 cm s-1) in the following equation:

where ip is the peak current, n is the stoichiometric number of electrons involved in the electrode reaction, A is the area of electrode in cm2, Do is the diffusion coefficient of (cm2s-1), Co is the concentration (mol/cm3) and υ is the scan rate in (Vs-1). Based on the above equation the surface area of the electrode was found to be 0.0287 cm2 [14-18].

The crude ethanol extract was taken into the cell in 0.1 mol/L PBS buffer solution and three electrodes are immersed into the solution. The potential was applied from -0.4 to 1.0 V versus standard calomel electrode (SCE). Figure 1 shows two cyclic voltammograms and solid line represents the cyclic voltammogram for 0.5 mol/L PBS solution. The solid line voltammogram doesn’t show any peaks and the dashed cyclic voltamogram shows anodic peak at +0.19V and cathodic peak at 0.1V with corresponding peaks currents. The pure resorcinol was taken for the electrochemical measurements and the same peak potential was obtained. This confirms that this method can be used for the electrochemical detection of resorcinol. 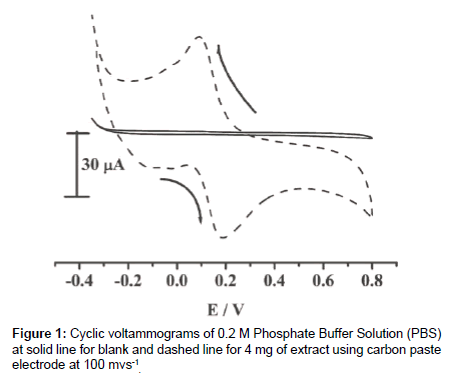 The effect of the scan rate on the anodic peak current of the resorcinol was investigated experimentally. Figure 2 shows the graph of the current versus scan rate obtained for the crude ethanol extract in 0.5 mol/L PBS buffer solution of pH 7.0 on the CPE. The electrochemical study shows that a good linear relationship was obtained between the Ipa and the square root of the scan rate (Figure 3) in the range of 50 to 300 mV/s with a correlation coefficient of 0.99 which indicates a diffusion-controlled process occurring on the surface of CPE. From the above observations it is clear that the electrode process is controlleddiffusion processes [19-21]. 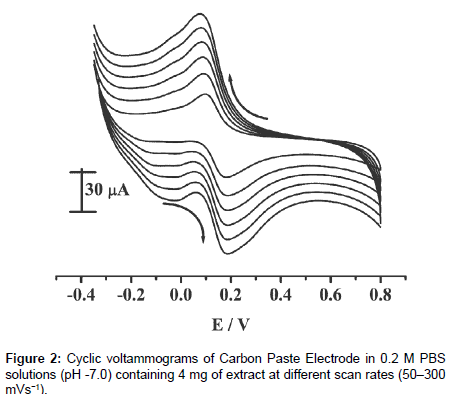 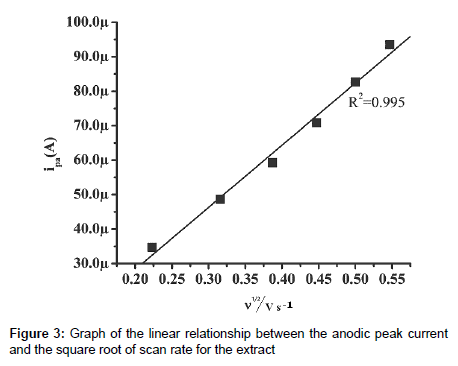 Figure 3: Graph of the linear relationship between the anodic peak current and the square root of scan rate for the extract 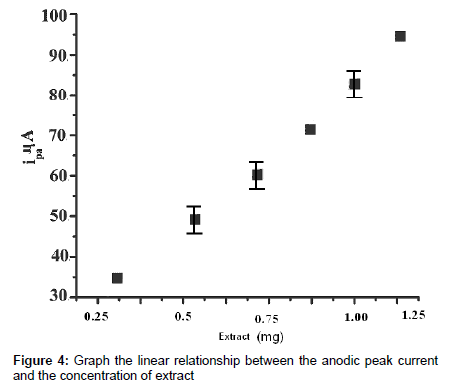 Figure 4: Graph the linear relationship between the anodic peak current and the concentration of extract

Resorcinol confirmation test: The extract solution is treated with the solid pyrocatechol and dilute sodium hydroxide, a transient bluegreen colour appears and then gradually pink to violet-red colour develops on the surface of the solution and the production of red colour is characteristic of for resorcinol [27].

Stability of the electrode

The voltammetric behavior of crude ethanol extract was similar to that of voltammetric behavior of resorcinol. It is noteworthy that, the two-electron single step redox process was occurred at bare carbon paste electrode. On varying sweep rate and concentration of the extract suggests that overall electrode process is diffusion-controlled. Therefore with its low cost and ease of preparation of the carbon paste electrode approach can readily be applied to the determination of resorcinol and other related catechol amines.