Copyright: © 2013 Graudenz GS, et al. This is an open-access article distributed under the terms of the Creative Commons Attribution License, which permits unrestricted use, distribution, and reproduction in any medium, provided the original author and source are credited.

Urban populations are spending increasing periods of time indoors due to indoor air quality and review and world health organization changes in lifestyle that have taken place in the last decades. Indoor Air Quality (IAQ) related problems are the environmental health issue most commonly related to occupational respiratory problems, but factors associated with perceived IAQ are complex and include temperature, humidity, air-exchange rates, odors, contaminants, labor, and hostrelated factors [1,2]. Importantly, the use of air conditioning systems is consistently associated with respiratory symptoms when compared to natural ventilation also in tropical climates [3,4].

There is increasing evidence that temperature and relative humidity are determinants for IAQ perception and related respiratory symptoms, but their specific effects in different subsets of the population are yet to be determined [5].

There is a consistent association between female gender and indoor air complains in air-conditioned working environments, but there is much controversy regarding its cause [6,7]. There is evidence to believe that the reason for the difference resides in women being more prone to work-related, adverse psychological conditions and that they differ from men with regard to thermal perception per se, as a result of their lower skin temperature and evaporative loss [8-10]. The traditional method of calculating comfort indices based on predicted mean vote (PMV) and predicted percentage dissatisfied (PPD) using physical data and thermal sensations is widely accepted [11]. However, these indices cannot isolate the patterns of subjective information of indoor air perception that are combined to form the final indices. The use of principal components factor analysis can add a new perspective in IAQ studies, for in this approach no variable is considered as a dependent variable [12]. Instead, it makes patterns of correlated variables responsible for cumulative variances. This data analysis of subjective information can add valuable information to the traditional comparison of means of groups from analogue perception scales [13].

The aim of this study was to compare men and women with regard to patterns of IAQ perception under constant relative humidity and different temperatures in an experimental office environment, by means of a visual analogue scale of IAQ.

The present study was approved by the ethics committee of the State University of Sao Paulo, Brazil. After providing informed consent, individuals were selected from a population subset aged from 20 to 45 years. Subjects were not under treatment for endocrine, infectious or rheumatologic diseases. Subjects underwent a medical history and physical examination. The male group consisted of 17 individuals, and the female group consisted of 16 women aged matched with the male group.

All enrolled subjects were invited to fill out the reduced visual analogue scale (VAS) regarding IAQ and respiratory symptoms proposed by Kildeso during the temperature tests [14] (Figure 1). This scale consists of seven different questions concerning general ideas of indoor air quality and related parameters. Individuals were instructed to complete the scale by plotting their perceptions according to intensity on a 100 mm-long line with the extremes of perception at given intervals. 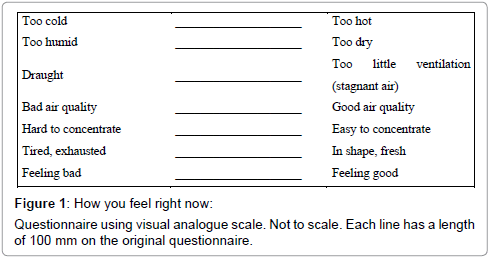 Figure 1: How you feel right now:
Questionnaire using visual analogue scale. Not to scale. Each line has a length of 100 mm on the original questionnaire.

The selected population wore standardized thermal protection clothing of 1.0 CLO unit [15]. Temperature tests were performed in a heat- and humidity-controlled 34.8 m2 chamber isolated from sound, light, and natural ventilation already described in other chamber studies [16] (The chamber’s air supply came exclusively from a fan coil with a nominal output of 340 m3/h and from a chiller with 5 tons of refrigeration capacity. The experimental system ensured air exchange rates of more than 27 m3/hour/person. Levels of indoor pollution were monitored for biological (viable fungal spores), inorganic (total particulate matter) and personal (carbonic dioxide levels) pollutants. Subjects were exposed to different thermal conditions of 14, 18, 22 and 26 degrees Celsius (°C) – or, correspondingly, 57.2, 64.4, 71.6 and 78.8 degrees Fahrenheit (°F) – with a relative humidity of the indoor air of 65 ± 7%. After 1 hour of acclimatization, individuals were asked to fill out the visual analogue scale and leave the chamber. During challenges individuals were asked to perform their daily intellectual activities on separate personal computers.

Individual perception of IAQ was analyzed for each group by factor analysis using the principal components method and varimax rotation with Kaiser normalization. Factors (components) with eigenvalues > 1 and r > 0.30 were selected. The characteristics of study groups were compared using Chi-squared and Student’s t tests. Differences between VAS scores were analyzed using the Mann Whitney U test.

In the chamber, we achieved air temperatures equivalent to radiant heat temperature. Considering that thermal protection of 1.0 CLO was used, we obtained thermal neutrality for an operative temperature around 22°C. Study compliance rate was 98.5%. One male volunteer did not complete the intermediate temperatures of 22 and 18°C due to suggestive symptoms of upper airways viral infection during the protocol.

Comparison of means: There was a significant gender difference concerning temperature perception. The female group reported a colder sensation than the male group at 14°C (p=0.016). All other IAQ perceptions did not differ between genders (Table 1).

This study suggests that under standardized clothing protection both genders produce very similar patterns of indoor air perception at most temperatures, supporting evidence that cultural gender differences in clothing protection are a determinant factor. On the other hand in colder environments, around 14°C, the female group reported greater cold perception, suggesting gender-related differences in IAQ perception far from thermoneutrality.

Subjective perceptions are prone to be influenced by various personal factors including mood, personal confidence and other characteristics related to personality and circumstances. This could influence perceptions of well-being, mental concentration capacity and other subjective perceptions, but should not interfere with those of cold, heat, humidity and air quality. On the other hand, simulated conditions can eliminate job-related stress and dissatisfaction that consistently influence IAQ perception [9,17].

Factor analysis is a valuable tool in analyzing subjective data, but caution must be taken in interpreting the results. The clinical relevance of the findings should be judged carefully to avoid misleading information. Nonetheless, the results showed remarkable cumulative variances explained by the analyzed components, as well as strong associations, diminishing this bias.

The temperatures that were studied are those commonly found indoors as a result of artificial acclimatization [18]. Indoor temperatures around 14°C (57.2°F) are considered cold for normal indoor standards. Enhanced thermal perception to cold air has already been described as annoying to females [19] and could account for the higher overall rates of IAQ-related complaints noted by women. Surprisingly both groups had a very similar principal component analysis of IAQ perception, correlating good indoor air quality, easy mental concentration, freshness and well-being, apart from the female group showing an inverse correlation between these factors and stagnant air.

At 18°C (64.4°F), both groups also showed similarities, correlating freshness, well-being and draughty (non-stagnant) air. The Male group also correlated good indoor air and easy mental concentration, whereas the Female group correlated cold (non-hot) air perception and the preceding factors. The second component comparison at this temperature showed important differences concerning correlations between sensations of dry and stagnant air. While the Male group correlated good IAQ perception, dry and stagnant air, the female group showed a correlation among dry and stagnant air, poor IAQ and not feeling good (poor well-being). This component accounted for 22.8 and 24.1% of the total variance of the Male and Female group, respectively.

At 22°C (71.6°F), the first component also had similar profiles in both groups. A strong correlation among non-dry air, easy mental concentration, freshness and well-being appeared in both groups, whereas the Male group also correlated the above with good IAQ and the Female group correlated these sensations inversely with stagnant air. Total variance explained by this component (43.9 and 42.4) and KMO results were similar.

Indoor temperatures of 26°C (78.8°F) are normally exceedingly high and not recommended for indoor air settings. Similarities between the two groups were also evident at this temperature, in which there was a correlation among easy mental concentration, freshness and well-being. The female group also correlated dry and cold (non-hot) air among the preceding factors.

This finding supports the notion that clothing is a more important determinant than physiological differences concerning thermal perception between gender as previously reported [20]. Field studies recently conducted in hot-humid climates showed no significant differences (0.1°C) between males and females at an indoor operative temperature at which thermal sensation was most frequently neutral, although the rate of thermal dissatisfaction was higher among females than males [21].

This study suggests that independent of comfort indices, males and females have a very similar pattern of thermal and indoor environment perception in experimental studies in the tropics. The practical implications of this study suggest that less stringent standards of social dressing in formal workplaces could lead to fewer disparities among gender thermal perception. Further field studies using this approach are needed to confirm this result.

Dr. Graudenz thanks the Research Support Foundation of Sao Paulo (FAPESP) with Grants n° 03/0846-5 and 02/09082-5 for financial support and Fundação de Apoio a Pesquisa – Nove de Julho University for technical support. We are also grateful to Prof. Dr. Pedro Cortes for leading the research group.