Copyright: © 2014 Mohiuddin Chowdhury ATM, et al. This is an open-access article distributed under the terms of the Creative Commons Attribution License, which permits unrestricted use, distribution, and reproduction in any medium, provided the original author and source are credited.

A POLYP is defined as a proliferative or neoplastic lesion of gastrointestinal mucosal layer. It is a "polypoid lesion" which appeared at endoscopy, protruding into the lumen of digestive tract as discrete projection above the adjacent mucosal surface. In most cases, polyps are incidental findings during routine endoscopy, also they are typically found incidentally when upper gastrointestinal endoscopy is performed for an unrelated indication. These lesions have previously been accepted as completely benign but Gastric adenomas have a higher incidence of malignant transformation than adenomatous polyps in colon. Though polypectomy has various immediate and delayed complications, Specially in case of multiple polypectomy. Multiple polypectomy has been advised and applied in several phages for the achievement of complete removal of polypoid lesions in same patient. In the aim to reduce the frequency of this invasive procedure and to achieve a probable safe limit in a single phase we performed an evaluatory multiple endoscopic gastric polypectomy under extensive precaution and close supervision in two phages of a same patient. To avoid possible hazards and to minimize the complication as possible we choose a non-diabetic, non-hypertensive patient with no established cardiovascular disorder. In first phage a number of thirty two and in second phage twenty nine gastric polyps had been success fully removed by electro coagulation without any immediate or delayed complications.

Multiple gastric polypectomy has been advised and performed in several settings in a same patient to remove possible complications and the threat of malignant transformation of polyps. In the aim to reduce the number of frequency of endoscopic invasion and to achieve a probable safe limit of the number of gastric polypectomy we performed an evaluatory multiple endoscopic gastric polypectomy under extensive precaution and close supervision in two phages of a same patient. To avoid possible hazards and to minimize the complication as possible we choose a non diabetic, non hypertensive patient with no established cardiovascular disorder.

We report a 66 years old female patient presented to the outpatient department of Gastroenterology complaining upper abdominal pain for a period three months with loss of appetite and occasional nausea. On examination the patient was generally healthy, her upper abdomen was moderately tender and no significant major systemic disease was found. She was non diabetic and not hypertensive. With history of occasional PPI intake. The patient denied weight loss, history of altered bowl habit or use of NSAID.

Her clinical examination and routine blood tests were normal. But upper GI endoscopy reveals feature of gastritis with multiple gastric polyps about sixty in number of <0.6 cm (Figure 1). While a colonoscopy revel no abnormality. In the first attempt with proper preparation 32 polyps were endoscopically removed (Figure 2) successfully by electro coagulation. During polypectomy procedure no immediate hemorrhage is seen. 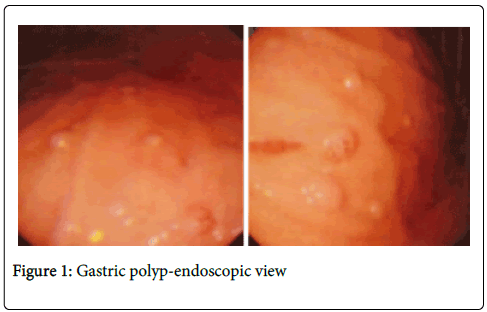 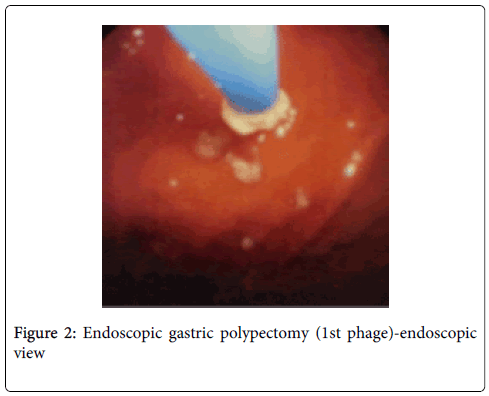 In the second attempt twenty nine gastric polyps (Figure 3) were endoscopically removed without any complication. Previous polypectomy sites show excellent recovery (Figure 4) with no sign of ulceration or any other lesion. The patient was kept under close observation for three days with post polypectomy treatment and no complications were observed. 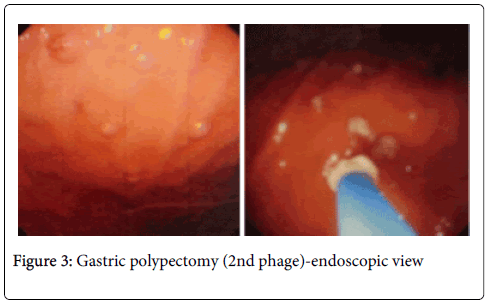 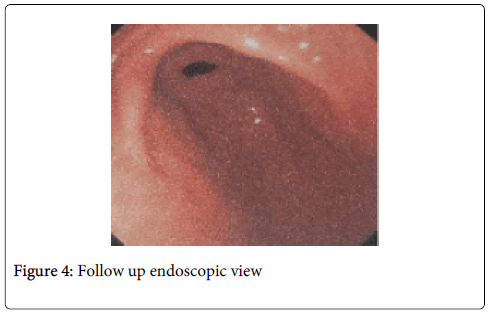 Her 15th and 30th day follow up shows no detectable complication with significant improvement of the previous complains. Evidence of upper GI hemorrhage or change of stool color was denied. Physical examination reveals no sign of anemia, soft non tender abdomen with normal bowel sound.

A POLYP is defined as a proliferative or neoplastic lesion of gastrointestinal mucosal layer [1]. It is a “polypoid lesion” which appeared at endoscopy, protruding into the lumen of digestive tract as discrete projection above the adjacent mucosal surface. Usually they are found in 2-3% of all gastroscopic examinations [2]. In most cases, polyps are incidental findings during routine endoscopy, also they are typically found incidentally when upper gastrointestinal endoscopy is performed for an unrelated indication [3,4]. The most common types of benign epithelial gastric polyps (BEGP) are fundic gland polyps, hyperplastic polyps and adenomas. If there are multiple gastric polyps present, these are usually of the same histological type [5]. Polyps were classified macroscopically according to Yamada’s classification [6]. Yamada type I polyps are elevated, with an indistinct border. Type II polyps are elevated with a distinct border at the base but no notch. Type III polyps are elevated, but no peduncle. Type IV polyps are pedunculated and elevated.

Gastric polyps rarely produce symptoms like haemorrhage and delayed gastric emptying [3,7]. But the surrounding mucosa often shows features of atrophic gastritis with patchy intestinal metaplasia. Associated presentation with other conditions, such as chronic atrophic gastritis and pernicious anemia and upper gastrointestinal bleeding (typically occult) or obstruction is also noted [8]. Polyp formation is strongly associated with chronic gastritis; Helicobacter-associated gastritis, pernicious anemia, reactive or chemical gastritis, when adjacent to ulcer erosions and around gastroenterostomy stomas [8,9]. These lesions have previously been accepted as completely benign. However, some current studies showed that they might include adenomatous changes or dysplastic areas [9-12]. Gastric adenomas have a higher incidence of malignant transformation than adenomatous polyps in colon [13]. Hyperplastic polyps account for approximately 75% of gastric polyps [14] and are believed to develop as a consequence of mucosal response to tissue injury and inflammation. Which were previously considered completely benign but recent evidence shows small but well-defined malignant potential [15,16]. The reported frequencies of dysplastic foci within hyperplastic polyps showed a wide range (4-22 %) [17,18]. Hizawa [19] and Zea-Iriarte [20] found the incidence of malignancy in hyperplastic polyps was 2 % and 1.8 %, respectively. Though there is an increased risk of adenocarcinoma elsewhere in the stomach because of association of chronic gastritis, particularly autoimmune gastritis and H.pylori gastritis [20,21]. A positive association between FGPs and acid suppression was first reported in 1992 [22]. This is possibly because of this that PPIs elevate serum gastrin, which is a growth factor for oxyntic mucosa and a downstream target of Wnt signaling [23,24]. Beside that however the second step in FGP formation is considered as the formation of Fundic gland cyst secondary to dilated glands, as the fundic gland cysts enlarge subsequently they develop into FGPs [25]. Some studies do indicate association between use of proton pump inhibitors and fundic gland polyps (FGPs) and a 4-fold increase in the risk of developing FGPs with long-term PPI use [26,27]. In a study FGPs were present in 23% of patients on PPIs compared with 12% of patients not taking a PPI [27]. The incidence of gastric cancer is increased in patients with FGPs (Fundic Gland Polyps) and FAP (Familial Adenomatous Polyposis) [28]. The pathogenesis and cancer risk of FGPs are not well understood. FGPs in FAP arise from mutational inactivation of the adenomatous polyposis coli gene, whereas sporadic FGPs are usually caused by activating mutations of the b-catenin gene [29]. A study reported a significantly lower rate of FGP dysplasia in FAP patients taking acid suppressive medications (histamine antagonist or PPI) versus patients not using these medications [30].

Complete removal of gastric polyp is recommended by experienced endoscopist of all epithelial gastric polyps larger than 5 mm after thorough individualized risk-benefit analysis [31,32]. Though there is an existing debate between taking biopsy before performing Polypectomy. However, forceps biopsies carried the risk of missing the neoplastic foci within polyp, since only a small portion of the lesion was sampled in this technique [33]. Seifert and Elster [34] showed a remarkable discrepancy of 70 % of cases between histopathologic results of biopsy materials and polypectomy specimens compared in same lesions. With this observation, the authors recommended to remove all gastric polyps larger than 5 mm in diameter [33,35].

Repeat gastroscopy should be performed at 1 year following complete polypectomy for high risk polyps [36]. Bleeding is the primary complication of polypectomy [37] and it has been reported to be as high as 3% to 6.1% [36-43]. Gastric perforation during endoscopic polypectomy is also having been reported [44]. Endoscopic post polypectomy hemorrhage can be immediate or be delayed from hours to up to 29 days [40-42]. Polyps up to 1 cm in diameter have been safely removed in patients on warfarin therapy. In a report of 225 polypectomy in 123 anticoagulated patients, three patients bled (one requiring treatment) [45]. Risk of significant bleeding is greatest with sessile polyps larger than 2 cm in diameter, followed by those with a thick stalk; significant bleeding is unlikely to occur if a small polyp is removed with a snare without cautery [46]. The reported incidence of perforation during polypectomy of “normal-sized” polyps ranges from 0.3%-0.5% [47]. Though the complications of polypectomy widely vary as presented in literature, polyp size has been the most important identified risk factor for both hemorrhage and perforation. Age = 65 years, Hypertension, cardiovascular or chronic renal disease, use of anticoagulants, poor bowel preparation, cutting mode of electrosurgical current, and inadvertent cutting of a polyp before current application are also identified risk factors. A total of 6617 cases of colorectal polypectomy was performed in 3138 consecutive patients in Japan shows that Hypertension is a significant risk factor for delayed colorectal postpolypectomy hemorrhage. The interval between polypectomy and hemorrhage can be as long as 14 days in the presence of hypertension [48]. Though Hemorrhage was the most frequent complication even if it remains questionable whether the bleeding should be considered a complication when it occurs during the procedure and is effectively and immediately controlled by Endoscopic means [49].