Energy-Saving by Adding Vinegar or all Acidity Components in Food, at the End of Cooking

Energy-Saving by Adding Vinegar or all Acidity Components in Food, at the End of Cooking

Households must reduce the energy consumption. This paper presents how energy consumption can be reduced by the correct preparation of food. Vinegar or all-acidity components (tomatoes) must be added to food at the end of cooking. This is because acid raises the ionization constant. Acid-ionization is an endothermic reaction and needs more energy. During the correct preparation of food energy can be reduced by about 30% energy.

Countries have to cut gas emissions and raise energy-efficiency. It is a requirement that electricity production should be provided more and more from non-fossil renewable energy (such as wind, solar, geothermal, fuel cells, biomass…) [1].

High-efficiency systems are associated with low emissions. The installation of combined heat and power schemes replacing less efficient systems leads to economical and environmental benefits, as well as significant optimisation of primary energy consumption [2]. The effects of retrofit strategies, such as cogeneration systems, often integrated with absorption chillers, on primary energy saving and pollution reduction have been investigated in several applications characterized by relevant energy demands.

Combined heat and power, also known as cogeneration, offers considerable reduction in greenhouse gas emissions by making use of heat that is otherwise wasted during electricity production. These include improving the efficiency with which energy is produced and reducing emissions from energy. Research and development stimulate climate-friendly technologies.

Currently, the desire to alleviate the problem of global warming has resulted in environmental concerns over the reduction of greenhouse emissions from industrial sources. The greenhouse gases include methane (CH4), carbon dioxide (CO2), nitrous oxide (N2O), halogens such as chlorofluorocarbons, and hydro fluorocarbons. From among them, CO2 is the primary contributor to the problem due to its abundance, thus becoming a major target for reduction. Concern over global climate change has led to a need for reducing CO2 emissions from chemical plants.

A complex AxBy breaks down into xA subunits and yB subunits during reaction. For the general reaction the dissociation constant is defined:

where [A], [B], and [AxBy] are the concentrations of A, B, and the complex AxBy, respectively.

Parameter pKa, is equal to minus the logarithm of Ka:

The acid-based dissociation constant (pKa) is a measure of the tendency of a proton (H+). Water is a very polar solvent and will increase the likelihood of a species being taken-up into aqueous solution.

The constant for the self-dissociation of water (KW) should be included for aqueous solutions:

Vinegar is a liquid produced from the fermentation of ethanol during a process that yields its key ingredient, acetic acid. Acetic acid is concentrated from 4 to 8 percent by volume for table vinegar (typically 5%) and higher concentrations for pickling (up to 18%). Natural vinegars also contain smaller amounts of citric acid.

Electric power is defined as the rate at which electrical energy is transferred by an electric circuit [3-6]. The SI unit of power is the watt.

When electric current flows in a circuit with resistance, it works. Devices convert this work into many useful forms, such as heat (electric heaters), light (light bulbs), motion (electric motors) and sound (loudspeaker). Electricity can be produced by generation or from storage such as batteries.

Electric power, like mechanical power, is represented by the letter P in electrical equations. The term wattage is used colloquially to mean 'electric power in watts'.

In direct current resistive circuits, instantaneous electrical power is calculated using Joule's Law, which is named after the British physicist James Joule, who first showed that electrical and mechanical energy were interchangeable:

I is the current (ampere or A)

V is the potential difference (volt or V)

And electric energy, in unit Wh, is the product of power and time:

We prepared two identical pots (Figure 1) with halves of the same potato each having the same mass and form and placed them on one electric cooker (1500 W). The first pot contained only water in the second pot added vinegar (5 mL of 4%). After 15 minutes the first potato was boiling but the second potato needed additional 5 minutes to. 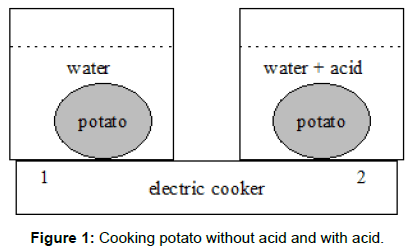 Figure 1: Cooking potato without acid and with acid.

The acid changes the ionization constant. The reaction is more endothermic and the more energy is needing.

The electric energy need without acid is:

The electric energy need with acid is:

The difference between with and without acids is 120 Wh.

Copyright: © 2018 Kralj AK. This is an open-access article distributed under the terms of the Creative Commons Attribution License, which permits unrestricted use, distribution, and reproduction in any medium, provided the original author and source are credited.