Copyright: © 2014 Bouhadan S, et al. This is an open-access article distributed under the terms of the Creative Commons Attribution License, which permits unrestricted use, distribution, and reproduction in any medium, provided the original author and source are credited.

have investigated all first and second degree immigrants from our IBD patient cohort. In Antwerp – Belgium there is an important Moroccan immigrant population since the 1960s. Phenotype differences were assessed between Moroccan and Caucasian immigrants. We looked at age at diagnosis, sex, disease location and behavior (Montreal classification), extraintestinal manifestations, need for anti-TNFα treatment and surgery. Our single-center results suggest that first and second degree Moroccan immigrants with IBD suffer predominantly from Crohn’s disease with a more severe phenotype characterized by penetrating disease leading to higher rates of CD-related surgery and need for anti-TNFα treatment. In addition, extraintestinal manifestations tend to be more prevalent in the Moroccan immigrant population. Possible explanations are discussed.

Inflammatory bowel diseases include ulcerative colitis (UC) and Crohn’s disease (CD). The etiology of IBD is not fully understood and is influenced by environmental, genetic and immunological factors. The geographic variation of IBD is well known [1]. The highest prevalence rates are reported in North America and Northern Europe, whereas the prevalence rates are much lower in eastern European and Asian populations [2,3]. It has been shown that higher incidence rates of IBD are associated with westernization [4]. People who immigrate to westernized countries have a higher risk for developing IBD [5]. The prevalence of IBD is also different among ethnic groups of immigrant populations [6,7]. Nguyen et al. showed a higher prevalence of IBD in Non-Hispanic whites compared with Non-Hispanic blacks [8]. The same study showed a higher ratio of IBD hospitalizations and IBDrelated mortality in Non-Hispanic blacks compared with Non-Hispanic whites. This suggests a different IBD phenotype among ethnic groups.

Based on this assumption, we have investigated the clinical phenotype of CD in first and second degree Moroccan immigrants in comparison to Caucasian immigrants in the Antwerp University Hospital.

Patients in this retrospective study were selected from the continuously updated IBD cohort from the Antwerp University Hospital, which started in 2005. The cohort consists of both patients who were diagnosed with IBD within our hospital and patients who were diagnosed with IBD in other centers and referred for treatment. Patients not attending our IBD clinic for more than 2 years were considered lost to follow-up and were not included. In addition, pediatric Crohn’s disease patients (<18 years) are followed in the Pediatric department and are not included either. When selecting Moroccan patients, all first and second degree immigrants were considered. Non-Moroccan Caucasian immigrant patients are a diverse group of East-European (Bulgarian, Albanian,…) and Middle-East (Turkish, Israelites,…) immigrants.

Phenotype differences were assessed between Moroccan and Caucasian immigrants. We looked at age at diagnosis, sex, disease location and behavior, according to the Montreal classification (Table 1). We also assessed smoking habits, extra intestinal manifestations, need for anti-TNFα treatment and the need for surgery. Chi-square statistics were used for analysis using SPSS for Windows. Differences were considered statistically significant at p<0,05. 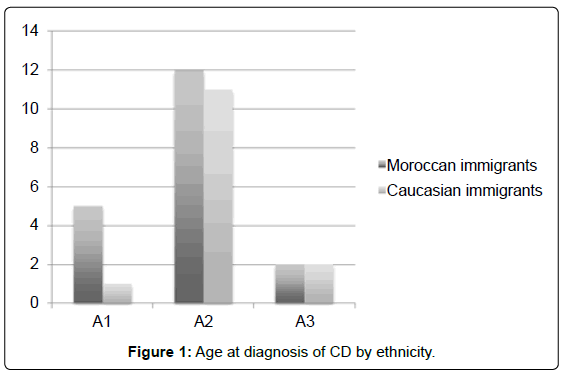 Figure 1: Age at diagnosis of CD by ethnicity. 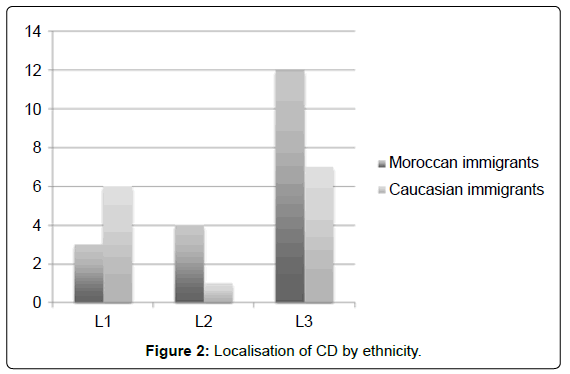 Figure 2: Localisation of CD by ethnicity. 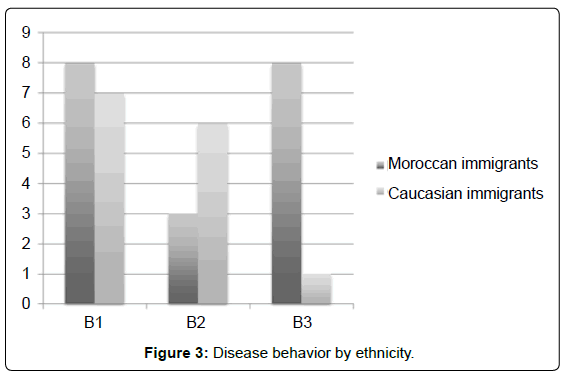 Moroccan immigrants underwent CD-related surgery more often, 47% vs 35% (p=0.530). They were also treated more often with anti-TNFα therapy, 57% vs 29% (p=0.095) and they suffered more extraintestinal manifestations, 36% vs 27% (p=0.1) (Figure 4). Although there was a tendency towards more serious disease in Moroccan CD patients, results did not reach statistical significance, possibly due to the small sample size. There were no differences in smoking habits. 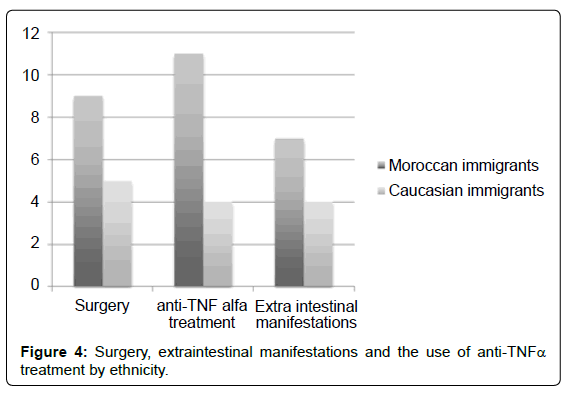 Figure 4: Surgery, extraintestinal manifestations and the use of anti-TNFα treatment by ethnicity.

It is known that genetic and environmental factors play a role in the etiology of IBD [1]. The incidence of IBD varies among different regions [1]. Emigration to industrialized countries creates a higher risk of developing IBD [5,9].

In this study we analyzed a multiethnic IBD population in the Antwerp University Hospital.

Belgium comprises a large population of Moroccans. In 2010 nearly 82 000 inhabitants had the Moroccan nationality on a total of nearly 11 million [10]. There is no information on the prevalence of IBD in Morocco. An epidemiological study on the incidence of IBD in Brussels showed the same incidence of CD among Moroccan immigrants compared to the native population [11]. Joossens et al. investigated a large Moroccan family in which the father developed CD after moving from Morocco to Belgium [12]. Four of his eight children also developed CD. They found no explanation by the known genetic and environmental risk factors.

We report a higher prevalence of CD in Moroccan patients compared to Caucasian immigrants in our active IBD cohort. Moreover, Moroccan CD patients tend to have more severe disease, illustrated by their younger age at diagnosis, more penetrating disease and more CD-related surgery, use of anti-TNFα treatment and extraintestinal manifestations. Several hypotheses can be put forward to explain these ethnic differences in IBD.

Genetic differences may account for phenotypic differences in CD. However, large-scale genetic consortium research in IBD has not shown specific genetic defects in Moroccan IBD patients [12]. Second, although in Belgium social security is available for all tax payers, Moroccans may have suboptimal access to healthcare with delayed diagnosis and treatment. Cultural and socioeconomic differences may play a role. Third, the Antwerp University Hospital is a tertiary referral center concentrating more severe CD patients. The lower prevalence of mild disease could be explained by the fact that patients with less severe disease are not referred to our center. However, this also accounts for Caucasian immigrants with CD. There is no reason to assume that Moroccan patients have a different referral behavior as compared to non-Moroccan immigrants or autochtone Crohn’s disease patients. Otherwise it is not impossible that the Moroccans have a more severe course of CD. Malaty et al. found that the rate of fistulizing CD among Hispanics was double that of Black and Caucasian Americans [6]. Our results are preliminary and a larger multicenter study in Antwerp is planned in order to confirm our findings and to determine possible underlying explanations. Future research will focus upon larger immigrant population cohorts, with more differentiated ethnicities to be compared with each other and with native Belgian IBD patient cohorts.

We conclude that these single-center results suggest that first- and second- degree Moroccan immigrants with IBD predominantly suffer from CD with a more severe phenotype characterized by penetrating disease leading to higher rates of CD-related surgery and need for anti-TNFα treatment. In addition, extraintestinal manifestations tend to be more prevalent in the Moroccan immigrant population. Further study is needed to confirm these findings and to explain why Moroccan immigrants seem to have more severe CD.