Field survey to the Jatropha growing taluqs of Shivamogga was undertaken to study the climatic conditions prevailing in those areas followed by collection of seed accessions from surveyed areas. About 200-250 fruits were collected from 15 places representing seven taluqs of Shivamogga. Fruits were processed and about one kilogram of seeds were procured from each place which were labeled as accessions. Fifteen accessions were tested for germination and oil content after storing them in polyethylene bags for two months. Results revealed the hindrance of mycoflora on faster rate of germination and high oil content ranging from 32.9% to 41.9% from the seeds of Esuru having moderate rainfall and temperature with black soil.

Self-reliance in energy is a basic requirement for the economic development of any nation. India is not self sufficient in petroleum reserve and has to import about two third of its requirement. Every year India is importing 78% crude oil at a cost amounting Rs.100,000 crore and above. Annual consumption of diesel in the country is around 40 million tons at present. Fossil fuels not only contribute to pollution but it is a major source of Green House Gases. The need to search for alternative sources of energy, which are renewable, safe and nonpolluting is very much necessary. Under such circumstances, options available are to reduce the fossil fuel consumption and increase the energy efficiency, a number of tree-borne oil seeds crops are identified as an alternate to biodiesel. Biodiesel is meant to be used in standard diesel engines and is thus distinct from the vegetable and waste oils used to fuel converted diesel engines [1]. Biodiesel can be used alone or blended with petro-diesel in any proportions. It supports more than 60% jobs across the country. In many rural areas of the country biodiesel plants are the driving force of the local economy. Reducing our dependence on foreign oil. Improving air quality and environment. The growth of biodiesel industry is driving new technologies and feedstock development. Some of the biodiesel plants are neem, flax, hemp, jojoba, olives, Tung tree, peanut, sunflower, safflower, pongamia, oil palm, coconut, cotton, soybean, grand couronne, Jatropha, maize etc., In our country almost neem, pongamia and Jatropha are used. Of these plants, Jatropha curcas is one of the prospective biodiesel yielding crops [2]. It doesn’t require pesticide due to its pesticidal and fungicidal properties. It lives approximately 40 years and yield starts from 9-12th month after planting. Jatropha may not replace other important food crops like cereals, pulses and oil crops. Since it is meant for flood free waste lands, unutilized fallow lands and less productive lands Simon [3]. It is identified as most suitable oil seed bearing plant due to its various favorable attributes like hardy nature, adaptability in a wide range agro-climatic condition, high oil recovery and quality of oil etc. Planning Commission, government of India has identified two species for mass production of seeds for biodiesel viz., Jatropha and Pongamia. Jatropha is suitable for upland while Pongamia found adaptive for both upland as well as wet land condition. Pongamia seed yield is less comparative to Jatropha.

Shivamogga is one of the districts of Karnataka state, India. A major part of Shivamogga district lies in the Malnad region of the Western Ghats. There are seven taluks i.e., Bhadravathi, Hosanagar, Sagar, Sorab, Thirthahalli, Shivamogga and Shikaripur. It is spread over an area of 8407 km2. Shivamogga lies between the latitudes 13°27ˈ and 14°39ˈ N and between the longitudes 74°38ˈ and 75°45ˈ E at a mean altitude of 640 m above sea level. During our visit information regarding the soil type, habitat of plant and age of the plant were recorded. During our visit temperature and rainfall were recorded. Temperature was recorded by using regular thermometer. Rainfall was recorded by gathering information from meteorological department of Shivamogga. This was done mainly to identify the effect of temperature and rainfall on the economic product that is seed (Table 1). Field visits were made for the collection of seed samples from all the seven taluqs of Shivamogga districts including Shivamogga town. Fruits were collected (Figure 1) from uncultivated wild plants and processed manually for healthy seeds. About 1 kg seed from each location were procured and called it as accession. Further about 15 accessions representing seven taluqs with safe moisture level of 12-13% was stored in laboratory condition in polyethylene bags for two months [4] (Figure 2). Further for testing seed germination, ISTA [5] procedure was followed and for mycoflora studies Standard Blotter Method was followed (Figure 3). 50 seeds at the rate of 10 per plate were plated and five replicates for each sample were made. This method was followed for all accessions. The experimental setup was placed in incubation chamber for 8 days under near ultraviolet radiation for 12/12 hrs, further the seeds were examined under stereobinocular microscope for the detection of type of fungi. Manual was utilized for further identification. In order to estimate the oil content of the samples from different taluqs, oil estimation was performed [6]. In order to do so, 25 seeds from each sample were taken separately and covered in butter paper, labeled and sent to Main Research Station, Raichur for oil estimation by Near Magnetic Resonance technique. Field Survey was undertaken to a total of 7 taluqs of Shivamogga district with about 18 villageswere personally visited to observe the plants, their stage, temperature and rainfall in that particular area. In Shivamogga 5 villages, in Shikaripura and Sagara 3 villages each likewise in Soraba, Hosanagara and Thirthahalli, 2 villages were visited. However we could visit only one village in Bhadravathi. Therefore a total of 18 locations were visited to study the impact of soil, temperature and rainfall (environmental factors) on the yield of the crop. They were also recorded in each visited field. During the study the temperature recorded ranged from 24-33°C where Mandagatta showed a lower temperature of 24°C and Chikkanallur, Settisera showed a temperature of 33°C. However in other fields, it was between the given range. Rainfall ranged from 63 mm-400 mm/yr. except the Bioenergy park, Shivamogga, almost all visited places were with Jatropha as a hedge plant. However in Bioenergy park, the plants are grown as in 2 acres of field. Other than this, the number of plants ranged between 4-40. However inSettisera there was no record of Jatropha plants. Experiment revealed germination percentage ranged from 60 to 96. Kattigehalla got the least percent i.e., 60 and Guddekoppa, Esuru, Arasalu got the highest percent of 96, 96 and 90 respectively. Since the seeds of Chippali, Chikkanallur were not matured, seeds didn’t show germination. Mycoflora ranged between 16% to 49%. Bhadravathi sample showed the least percent mycoflora i.e., 16% and Chordi showed the highest percent of 49. Major fungi found in the samples were Gonatobotrys simplex cordawith 64%, Alternariaalternata, Rhizopusstolanifer, Fusariummoniliforme, Aspergillusnigerand Cladosporiumsphaerospermumranges from 18-35% [7]. The percentage ofeach fungi found in all the different places is shown. As per the result, Esuru, Guddekoppa and Arasalu got the highest percent germination of 96 and 90 as we mentioned earlier, mycoflora is below 43%, temperature varies from 27-28°C and the soil type is found to be red gravel [8]. But Bhadravathi accession showed 86% germination, percent mycoflora is 16%, temperature recorded was 28°C with an annual rainfall 63mm. Soil type is black sandy. Therefore Bhadravathi seed sample is found to be healthy compared to Guddekoppa, Esuru and Arasalu. Whereas the other villages showed below the expected percentage. Based on the healthy seeds and the percent germination, Bhadravathi got the first place and the order can be given to other taluqs is already shown. The mycoflora studied in different taluqs showed varied results. Important mycoflora recorded in almost all samples were found to be Alternariaalternata, Rhizopusstoloniferand Fusariummoniliforme. However, the dominating species immaterial with the location was Gonatobotrys simplex corda. In Sagartaluq, there is no average % mycoflora and germination because the seeds were not matured may be due to the high temperature of above 31°C and annual rainfall 141 mm or the time we have visited to that place.

Table 2: Table showing the comparison between the surveyed taluq for viability, mycoflora and oil content.

In viability test, the percentage of germination was calculated by Standard Blotter Method and the same method was followed to study mycoflora. It was studied that the faster rate of germination in all samples. As they were freshly harvested, we could get good rate of germination. The percentage of mycoflora obtained was different in different samples. When we compared the impact of mycoflora on germination, it was interesting to see that if the rate of germination was more, the rate of mycoflora was less (Figure 4). Clearly indicating that the viable seeds avoid mycoflora as there is a continuous physiological process which hinders the growth of mycoflora. As per the literature, the oil content of seeds was 30-40%. However our studies revealed the oil content range from 32.9 to 41.9%. Seeds of Esuru i.e., Shikaripura taluq showed higher percentage of oil content. The environmental factor favoured there may be moderate rainfall with moderate temperature along with black soil. Our results conclude that the seeds from Esuru are good varieties with more oil content and they are very good research material for further study. According to our studies, seeds collected from Esuru showed maximum oil content compared to other accessions. Good germination followed by less growth of mycoflora. It clearly indicates that the seeds of Esuru are the good source of germplasm for further studies. Still there is a need for consistent studies regarding the collection, storage and evaluation of seeds during other seasons. 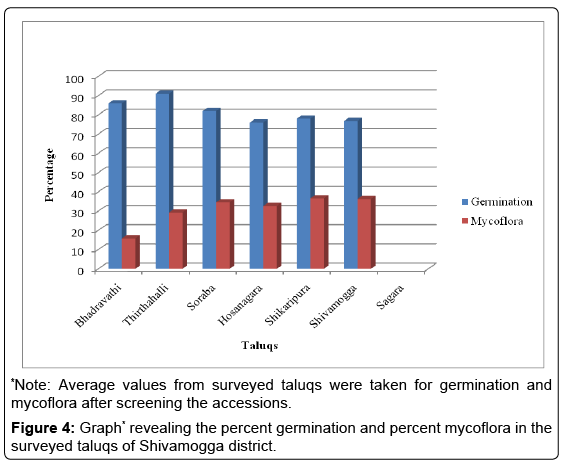 The authors are grateful for the UGCCPE Project, Sahyadri Science College (A), Shivamogga for funding to carry out this bonafide work.

Copyright: © 2016 Rajeshwari N, et al. This is an open-access article distributed under the terms of the Creative Commons Attribution License, which permits unrestricted use, distribution, and reproduction in any medium, provided the original author and source are credited.