The methylsulfonylmethane (MSM) is an organosulfur compound having sulfonyl functional group. It is occurred naturally in some primitive plants and used in disease related to chronic pain, inflammation, and arthritis. This study was attempted to evaluate the impact of biofield energy treatment on the physical, thermal, and spectral properties of MSM. The study was performed in two groups viz. the control group was remained as untreated, while the treated group was subjected to Mr. Trivedi’s biofield energy treatment. After that, both the control and treated samples were analyzed using surface area analyzer, X-ray diffraction (XRD), thermogravimetric analysisderivative thermogravimetry (TGA-DTG), differential scanning calorimetry (DSC), and Fourier transform infrared (FTIR) spectroscopy. The surface area analysis exhibited a significant decrease in the surface area of treated sample by 22.96% as compared to the control. The XRD analysis showed the significant increase in average crystallite size by 49.20% in the treated sample with respect to the control. The DSC analysis showed the significant increase (67.20%) in latent heat of fusion of treated sample with respect to the control. The TGA analysis showed the onset temperature of thermal degradation at 170°C in the control sample that was slightly decreased to 168.05°C after biofield treatment. Moreover, the Tmax (maximum thermal degradation temperature) was also decreased slightly from 186.66°C (control) to 183.38°C (treated). This indicated the early phase of vaporization in treated sample as compared to the control. The FT-IR spectroscopic study exhibited the alteration in wavenumber of S=O group that suggests the effect of biofield treatment on force constant and bond strength of MSM molecules.

Methylsulfonylmethane (MSM) is a naturally occurring sulfur compound with the formula (CH3)2SO2 [1]. The sulfur content of MSM is helpful to maintain the normal connective tissues in human. It showed the anti-atherosclerotic, anti-inflammatory and free radical scavenging activities [2,3]. As an anti-inflammatory agent, it is used in joint inflammation, osteoarthritis, rheumatoid arthritis, osteoporosis, eye inflammation, chronic pain, muscle cramps, musculoskeletal pain, stretch marks etc. [4,5]. MSM has effectively delayed the tumor onset in colon cancer and mammary breast cancer in rats [6,7]. Moreover, due to its polarity and thermal stability, MSM is used as a high-temperature solvent for wide variety of compounds including polymers organics, and inorganic salts [1]. It is also used as a medium in several organic syntheses like substitution of aryl chlorides with potassium fluoride can be conducted in the presence of MSM as a solvent [8]. By considering the therapeutic importance of MSM and as a solvent in organic/ inorganic synthesis, it is useful to discover an alternate approach, which can improve the physical, thermal, and spectral properties of MSM.

Healing therapy or therapeutic touch is being used as an alternative treatment approach in several fields, and known as the biofield therapy. The National Institute of Health/National Center for Complementary and Alternative Medicine (NIH/NCCAM) considered the biofield energy (putative energy fields) treatment in the subcategory of energy therapies [9]. The biofield energy treatment is used in the healing practice to diminish the anxiety, pain, and to stimulate the overall health of human being [10,11]. The biofield (bioenergetic field) referred to subtle energy field that permeates and surrounds the human body [12]. The health of living organism depends on the balance of this bioenergetics field. In the diseased condition, this bioenergetics field is depleted [13]. The practitioners of energy medicine manipulate and balance this bioenergetics field via harnessing the energy from the Universe [14]. Thus, the human has the ability to harness the energy from the Universe and transfer it to the object to balance or re-pattern the electromagnetic energy field [15]. The objects always receive this energy and respond to the useful way [16]. Biofield energy therapy includes various modalities such as healing touch, therapeutic touch, Reiki, etc. [17]. Mr. Trivedi is well known to possess a unique biofield energy treatment (The Trivedi Effect®) that has been studied in several fields like materials science [18-20], agricultural research [21], biotechnology research [22], microbiology research [23,24], and pharmaceutical sciences [16,25].

The methylsulfonylmethane (MSM) was purchased from S D Fine Chem Limited, India. The MSM was divided into two groups; one was remained as untreated (control), while another group was coded as treated. The treated group in sealed pack was handed over to Mr. Trivedi for biofield energy treatment under laboratory conditions. Mr. Trivedi rendered the biofield energy treatment to the treated group through his unique energy transmission process without touching the sample. Subsequently, the control and treated samples of MSM were evaluated utilizing the several analytical techniques like surface area analyzer, XRD, TGA-DTG, DSC, and FT-IR spectroscopy.

The surface area of control and treated MSM was determined using the Brunauer–Emmett–Teller (BET) surface area analyzer (Smart SORB 90) based on the ASTM D 5604 method. The range of the instrument is 0.2 m2/g to 1000 m2/g. Percent change in surface area was calculated with the help of following equation:

The XRD analysis of control and treated MSM was performed on Phillips, Holland PW 1710 X-ray diffractometer with nickel filter and copper anode. The wavelength of XRD system was set to 1.54056Å. The percentage change in average crystallite size (G) was calculated using following equation:

The TGA-DTG analysis was performed to determine the effect of biofield treatment on the thermal property of MSM. The analysis was done using Mettler Toledo simultaneous TGA-DTG system. Both the control and treated samples of MSM were heated up to 400°C from room temperature with a heating rate of 5°C/min under air atmosphere. The onset temperature (at which thermal degradation started) and Tmax (temperature at which maximum weight loss occur) in samples were acquired from TGA-DTG thermogram.

The melting temperature and latent heat of fusion of control and treated MSM were determined using the Pyris-6 Perkin Elmer differential scanning calorimeter. The samples were heated at the rate of 10°C/min under air atmosphere with air flow rate of 5 mL/min.

The FT-IR spectroscopic analysis was carried out to investigate the impact of biofield energy treatment at the molecular level like dipole moment, force constant, and bond strength in chemical structure [26]. The treated sample was divided into two groups i.e., T1 and T2 based on two different time period (i.e., approximately one month); each sample was then mixed and crushed with spectroscopic grade KBr into fine powder. Finally, the mixture was pressed into pellets and used for FT-IR analysis. The spectra were recorded on Shimadzu’s Fourier transform infrared spectrometer (Japan) with the frequency range of 500-4000 cm-1. 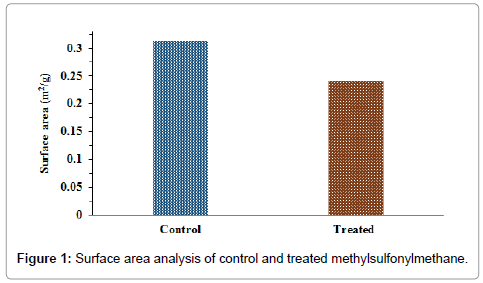 The XRD diffractograms of control and treated MSM are shown in Figure 2. The control sample exhibited the XRD peaks at 2θ equal to 16.41°, 20.38°, 24.25°, 25.33°, 29.38°, 33.06°, and 50.51°. Similarly, the XRD diffractogram of treated MSM showed the XRD peaks at 2θ equal to 16.47°, 20.40°, 20.51°, 24.16°, 24.32°, 25.32°, and 43.19°. XRD diffractogram showed the intense peaks in both control and treated samples of MSM, which suggest the crystalline nature of samples. Figure 2 showed the significant decrease in the intensity of XRD peaks after biofield treatment with respect to the control sample. Moreover, the most intense peak in control sample was found at 16.41° that was shifted to 20.40° in treated sample. The previously published literature suggests that the alteration in crystal morphology might cause the alteration in relative intensities of the peaks [29]. Furthermore, it is reported that due to presence of internal strain, the 2θ values might change [30]. Based on this it is presumed that biofield energy treatment may increase in internal strain in the treated sample, which might be responsible for alteration in 2θ values of treated sample with respect to control. 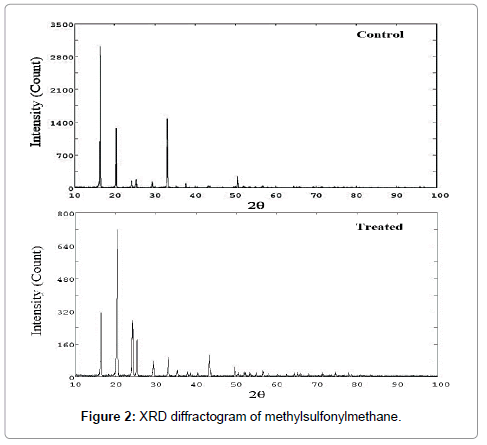 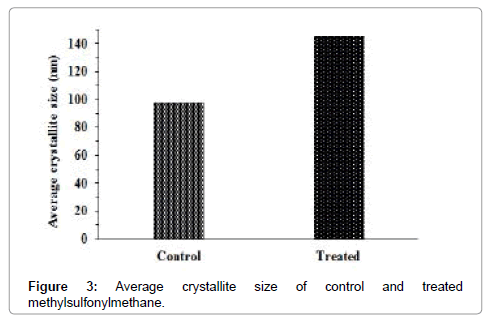 Based on this, it is assumed that biofield treatment might provide some thermal energy to MSM molecules. Therefore, the dislocation density might be reduced and accordingly the number of unit cell and average crystallite size were increased. The increase in crystallite size might also be correlated with decrease in the surface area of treated sample with respect to the control. 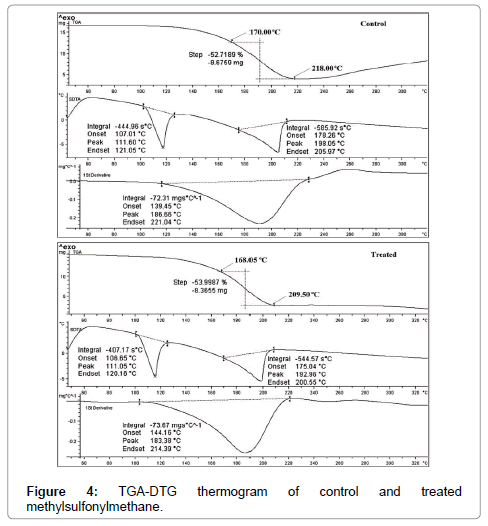 Table 1: Thermal analysis of control and treated samples of methylsulfonylmethane. 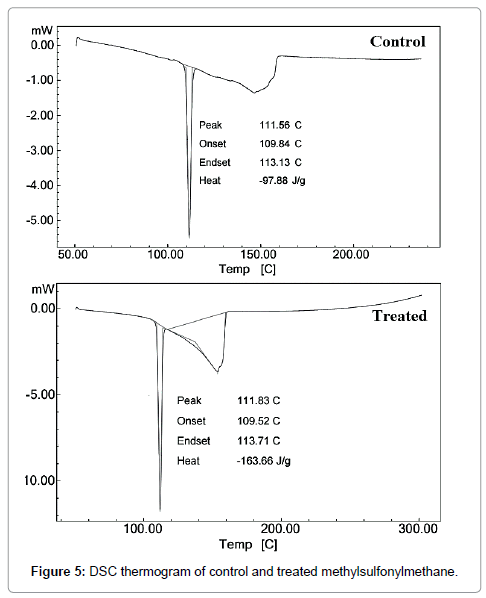 FT-IR spectra of the control and treated samples of MSM are shown in Figure 6. The FT-IR spectra were interpreted with the help of theoretically predicted wavenumber. The MSM molecule contains C-H, C-S, and S=O vibrations. The C-H (methyl) stretching was attributed to peaks at 2933-3016 cm-1 in control and treated (T1) sample, while in T2 sample it was observed at 2933-3018 cm-1. The C-H asymmetrical bending peak was observed at 1425 cm-1 (control and T1) and 1427 cm-1 (T2). The S=O asymmetrical stretching peak was appeared at 1290 cm-1 in control sample, 1288 cm-1 in T1, and 1257 cm-1 in T2 sample. While the S=O symmetrical stretching was observed at 1134 cm-1 (control), 1128 cm-1 (T1), and 1122 cm-1 (T2) sample. The result showed the downstream shifting of S=O asymmetrical (from 1288 cm-1 → 1257 cm-1) and symmetrical stretching (from 1134 cm-1 → 1122 cm-1) peak in treated (T2) sample as compared to the control. This could be due to decreased force constant and bond strength of S=O group in the treated sample [25,26,36]. Therefore, change in frequency might be due to the energy provided via. biofield treatment. According to Sohn et al., change in temperature showed alteration in bond strength of S=O group. Moreover, the C-S stretching was found at 698-761 cm-1 in control sample, 698-763 cm-1 in T1 sample and 700-758 cm-1 in treated sample. Altogether, the FT-IR result showed a significant change in the wavenumber of S=O asymmetrical and symmetrical stretching. The rest of functional groups did not show any significant change in the wavenumber with respect to the control sample. Overall, the present study concluded the significant impact of Mr. Trivedi’s biofield energy treatment on physical, thermal and spectroscopic properties of MSM with respect to the control. Based on this, it is expected that by altering the physicochemical properties using Mr. Trivedi’s biofield energy treatment, the MSM can be changed into the more effective form with respect to its pharmacological activity as well as solvent in organic synthesis.

The authors like to acknowledge the Trivedi Science, Trivedi Master Wellness and Trivedi Testimonials for their steady support during the work. Authors would also like to thanks the whole team from the MGV pharmacy college, Nasik fors providing the instrumental facility. 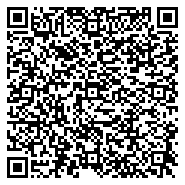