+44-1764-910199
Extraction of Furunculoid Myiasis Utilizing a Punch, Evaluation of the Technique | OMICS International

Extraction of Furunculoid Myiasis Utilizing a Punch, Evaluation of the Technique

Copyright: © 2017 Rocha GP. This is an open-access article distributed under the terms of the Creative Commons Attribution License, which permits unrestricted use, distribution, and reproduction in any medium, provided the original author and source are credited.

Treatment for furunculoid myiasis consists of three techniques: application of toxic substances to the egg or larvae, producing hypoxia to force emergence, and surgical or mechanical removal of the larvae [1]. Extraction generally is a painful technique, and often unsuccessful. Occlusion to produce hypoxia may require 24 hours to induce exiting of the larvae, which may still not emerge, resulting in foreign-body granuloma and calcification. Surgical removal through a scalpel incision is generally unnecessary and yields poor aesthetic results. This review aims to suggest a new technique for extracting furunculoid myiasis utilizing a punch to facilitate the procedure and to offer a surgical option that is practically painless for the patient and produces more aesthetically pleasing results [2].

Description of the Technique

Thirty extractions of funrunculoid myiasis were performed using the method developed by our team, which was performed as follows: antisepsis with chlorhexidine germicide, anesthesia with 2% lidocaine (injecting the periphery of the lesion so as not to perforate the larva), and creation of an incision with punch 4 (Figure 1A). The incised skin fragment was not detached in order to maintain its pedicle and to avoid tissue necrosis. The intact larva was removed via the opening (Figure 1B). The incised skin fragment was then replaced and an occlusive dressing of sterile micropore gauze was applied to promote healing and a good aesthetic result (Figures 2A and 2B). The dressing was left on for five days and then changed daily until complete healing in about 14-21 days (Figure 3). 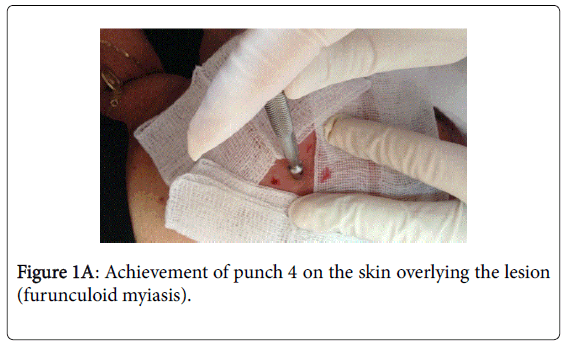 Figure 1A: Achievement of punch 4 on the skin overlying the lesion (furunculoid myiasis). Figure 1B: Extraction of the larvae from the myiasis, without removing the pedicle from the skin fragment formed by the punch 4. Figure 2A: After extraction of the larvae, it is important to observe that the skin fragment was kept on the orbit, avoiding necrosis formation at the site. Figure 2B: Taken immediately after the procedure, with only gaze and occlusive micropore. Maintained for 5 days, followed by daily exchange. 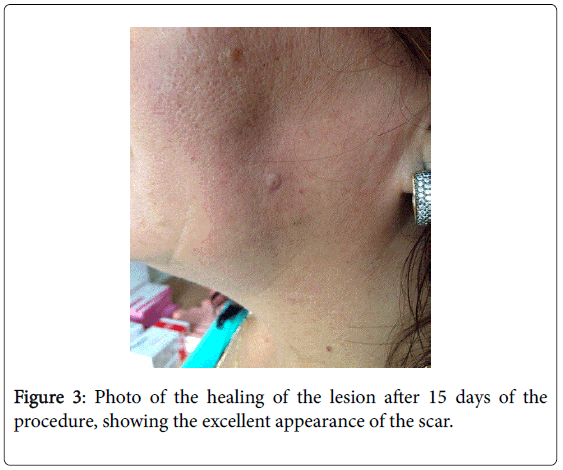 Figure 3: Photo of the healing of the lesion after 15 days of the procedure, showing the excellent appearance of the scar.

Myiasis is an infestation of humans and other vertebrates by diptera larvae. Larvae feed on live or devitalized tissues and may cause large infestations, depending on the host's immune status or the effected site. It is a dermatosis associated with travel to developing countries and occupies the fourth place in this group of dermatological diseases [3]. Myiasis can be classified anatomically as furuncleoid or cavitary. It arises from the infestation of natural cavities of the organism and is named after the affected anatomical region, where the larva burrows into healthy skin. Pruritus, pain, and a stinging sensation are the most common symptoms, followed by serous discharge through a small orifice [4]. The increase in international tourism requires medical professionals to diagnose and treat tropical dermatoses with effective, practical, and aesthetic methods [3].

Furunculoid myiasis, the form that we set out in this article, is the most common type of presentation and the etiological agent in the Americas is Dermatobia hominis (D. hominis), which in Brazil is known as berne [5]. Among its differential diagnoses are ruptured epidermal cyst, abscess, furuncle, foreign body reaction, onchocerciasis, tungiasis, extreme reactions to arthropod bites, and lymphadenopathy [4]. The diagnosis is clinical based on anamnesis, especially in the endemic regions. In indeterminate cases dermatoscopy, ultrasonography, or magnetic resonance imaging may be performed.

Treatment for furunculoid myiasis consists of three techniques: application of toxic substances to the egg or larvae, producing hypoxia to force emergence, and surgical or mechanical removal of the larvae. The goal of treatment is the complete removal of the larva from the skin, with the prevention or control of secondary infection [1].

Topical 1% ivermectin may be used for a furuncular injury caused by D. hominis , although there is a possibility that the dead larva may be trapped within the skin. Ivermectin may kill the larva inside the lesion, with a consequent inflammatory reaction. Antibiotics should be used only if there is a bacterial infection. Oral treatment is not recommended for furuncular myiasis. Although promising, the use of ivermectin for the treatment of myiasis is an off-label treatment in many countries and should be reserved for selected cases. There are no double-blind studies measuring the impact of ivermectin on myiasis [6].

Reports have noted the successful eradication of D. hominis infestation by occluding the punctum (breathing hole in the skin) with a substance to prevent gas exchange. To avoid asphyxiation, the organism emerges sufficiently to be grasped by the forceps of a vigilant patient or physician. Occluding substances that may be used are petrolatum, bacon, fingernail, and adhesive tape, among others. Some authors do not recommend adhesive tape, because this technique frequently leaves behind fragments. Occlusion may need to be maintained for 24 hours or more to have the desired effect. The risk of attempted occlusion is that the organism may asphyxiate without emerging, and the dead larva may elicit an inflammatory response, with the formation of a foreign-body granuloma and eventual progression to calcification [6].

Extraction should be avoided when D. hominis is the offending agent, because it is usually fruitless and painful, with a risk of rupturing the maggot. Secondary infection may result if the larva is ruptured or killed within the cavity, or not fully removed. The injection of 1% lidocaine (2 ml per nodule) is sometimes used to paralyze the larva, making the extraction easier. Liquid nitrogen applied before extraction stiffens the larva and helps aid in its removal [6].

It is very difficult to design good controlled studies, because myiasis represents a large group of pathological processes caused by a diverse number of agents. Surgical removal with a scalpel is an invasive technique which is often unnecessary, and is contraindicated in cases where there is cellulite. In addition, the larva is often lacerated, generating local inflammation [6].

The punch is an instrument composed of a circular cutting blade attached to a rod. The use of a punch permits a minimally-invasion lateral extraction of the larva from its burrow-hole, without major trauma to the skin, and with extraction of the entire larvae, reducing the inflammatory potential caused by larvae fragmentation. It is a less painful procedure, since it is performed using local anesthesia. Moreover, this mode of surgical extraction does not remove the fragment of skin cut by the punch, which is used to cover the cavity produced, facilitating healing and yielding more aesthetically pleasing results. Scarring to delicate regions such as the face, for example, is almost imperceptible as no suturing is necessary. The removal of larvae of furunculoid myiasis via a punch is a simple, practical technique that offers less discomfort to the patient, and yields an excellent aesthetic result, which is very relevant in cases of facial and cervical lesions.